The Evolution of the Headphone

Did you know the guy who invented the headphone never patented his invention as he thought it was too trivial and people used to spend the equivalent of $5000 per year for a music subscription service? 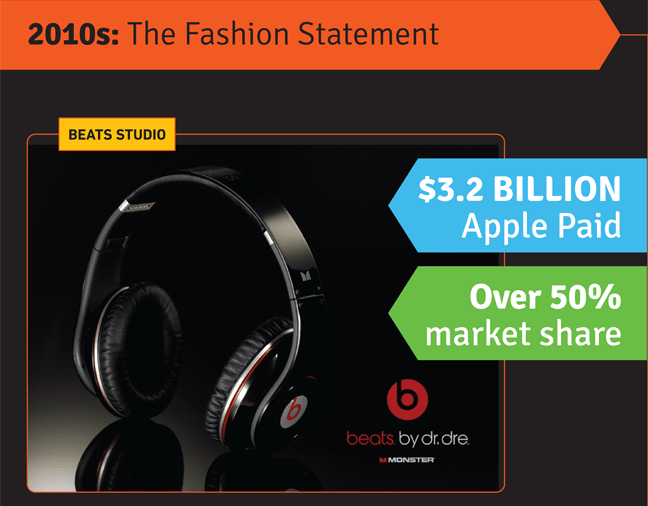 Did you know the guy who invented the headphone never patented his invention as he thought it was too trivial and people used to spend the equivalent of $5000 per year for a music subscription service?

Well that’s what I learned from this incredible interactive from UK based e-tailer liGo.

A mixture of scrolling text, video documentaries and great music accompanying each decade from “Billie Jean” for the 1980’s to 2013’s “Get Lucky” by Daft Punk representing the modern era. The earliest headphone, consisting of two speakers and a headband, was invented by Nathaniel Baldwin around 1910 as he wanted to listen to church services . His invention was so unique that the US Navy placed an order for 100 units of the so called “Baldy Phones”. The 1950’s is widely considered the decade which gave birth to Rock ‘n’ Roll and popular music. Before this dramatic change music had been for the social elite, with sky-high pricing and only sophisticated tastes being catered for. This was all about to change thanks to developments in technologies and altering attitudes leading to a musical revolution. Up until the 1950’s headphones were created almost exclusively for communications purposes. This all changed with the introduction of the Koss SP3 headphones, which were the first stereo headphones created specifically for using when listening to music.

The introduction of the 331⁄3 rpm (12-inch LP record) and the 45–rpm (7-inch record) soon followed providing an improvement in both storage and quality that required an advancement in headphones to facilitate its growth. Post-war teenagers with disposal incomes began building up their own record collections and the industry boomed. Record companies sprung up all over the UK as big band jazz was replaced by (the cheaper to produce) rock ‘n’ roll. Naturally as demand grew, so did supply with the emergence of Record Stores.

The emergence of stick headphones allowed Record Labels to promote their artist through Record bars and booths. Now anyone – no matter what their social status – could go into the record store, request a record of your choice and then make your way to your own private booth to sample your idols latest release.

Trendy teens could now hang out with friends and listen to Elvis Presley for the first time or buy the latest Little Richard LP from their local store. This was all about to change as the 60’s swung in bringing with it the cassette and The Beatles. In 1964, the TC-357, also known as the “SONY-O-MATIC Seven,” was fitted with a fully automatic recording level control function. This then led to the creation of the “Walkman”, released in 1979, which would go on to change the way we viewed music players, and headphones, forever.

Although there has been some great portable devices up until this point the success came from the fact Sony realised that true portability required a lighter headphone.

This led to the creation of the lightweight, foam covered MDR-3 headphones which were almost a tenth of the weight of other headphones available at the time. After Apple officially announced the purchase of Beats By Dre for over $3 billion, there has been speculation around the acquisition, with many business analysts suggesting that Apple were lured not just by Beats’ dominance of the premium headphone market, but also by Beats Music, their subscription-only digital streaming service.

So grab your headphones and check it out here.

Apple reportedly gearing up for new HomePods and smart devices