An awesome DAC that is probably overkill for most of us. 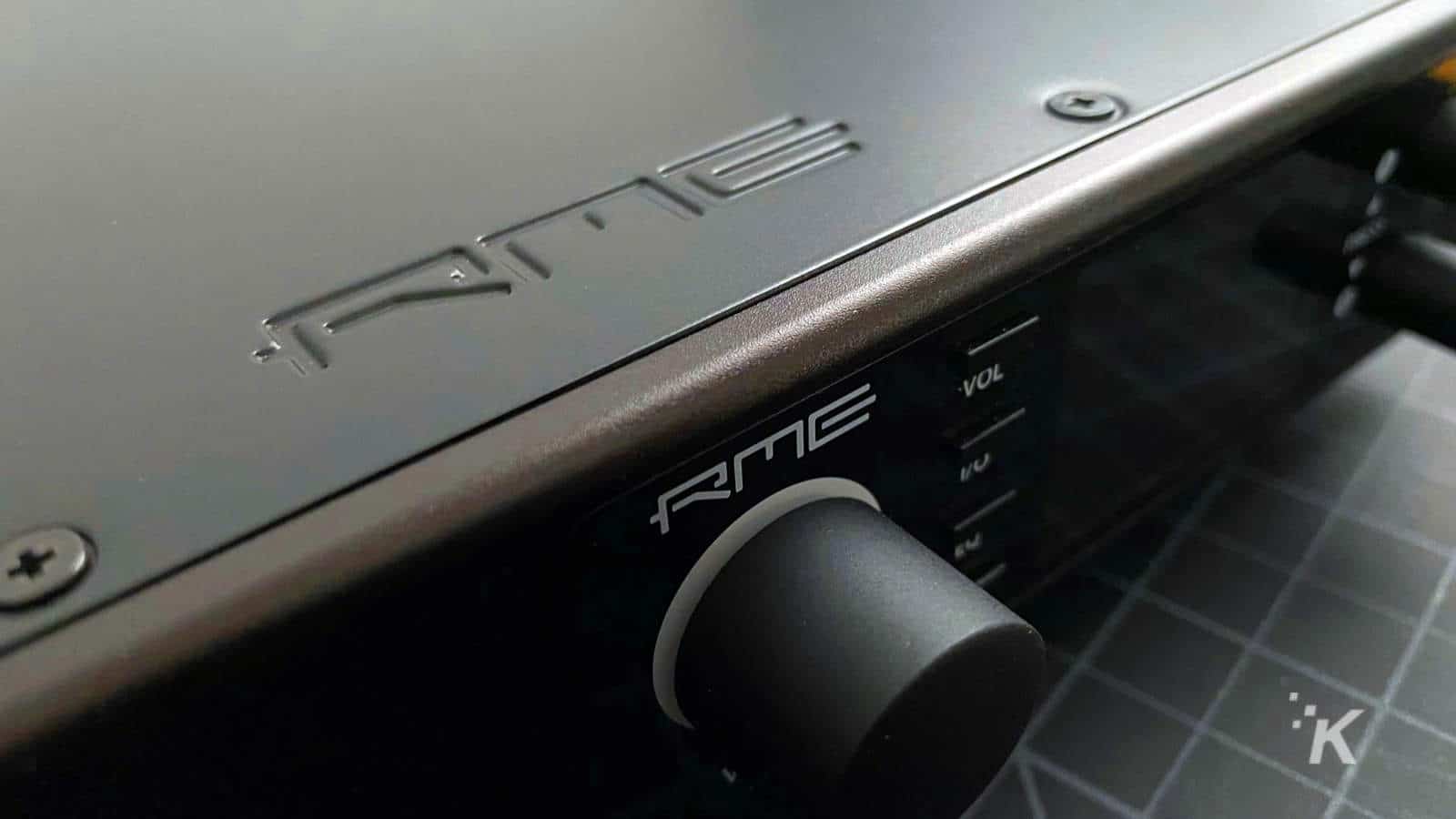 If you’ve become tired with the sound from your motherboard’s onboard sound card, or want to explore the world of high-res audio, you’ve come to the right place. See, to really get the best out of your music, you want to take the processing part of the audio signal path out of the noisy environment inside your computer. That means an external DAC, and an amp, so you can drive your headphones or other audio gear.

While you can do this with relatively cheap USB dongles, if you want to drive higher-end headphones such as the Beyerdynamic DT1990 Pro we recently reviewed, you’ll want to set your sights a little higher.

Enter RME, stalwart of the music creation industry, whose hardware is used by everyone from Grammy winners to bands to recording technicians and producers. The $1,149 ADI-2 DAC that we’re looking at today is a reference-class digital-to-analog converter, otherwise known as a DAC. Oh, but it’s much more than that… 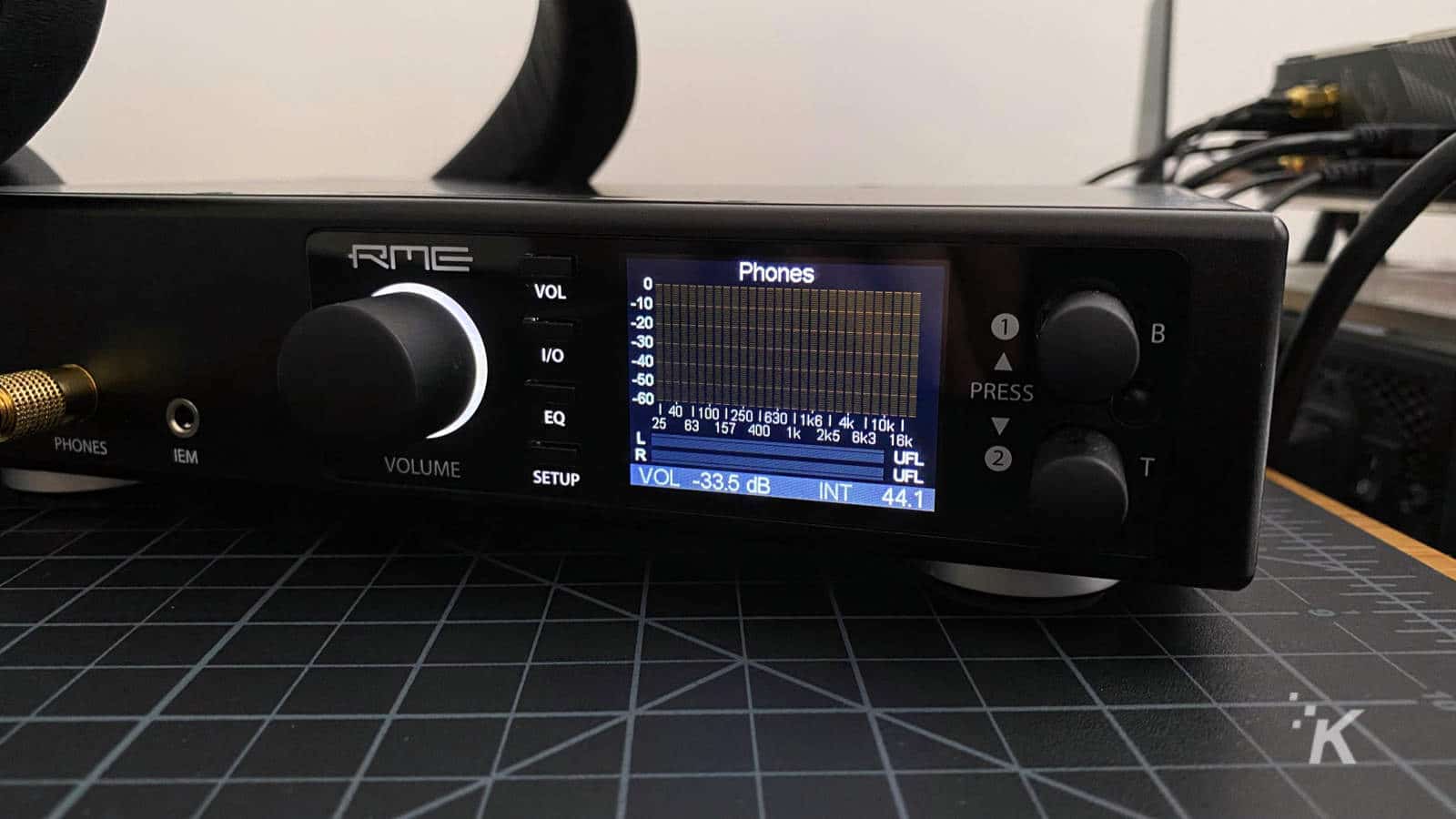 Ah, the science bit. So, DAC stands for Digital to Analog Converter. Essentially it turns the digital stream of numbers that your MP3s or streaming services puts out into a form that your headphones can use to turn into music that your ears can hear.

For the majority of consumer gear, the DAC is a very simple circuit or even possibly just one chip. That’s how smartphone makers can stuff it into a USB-C dongle. For audiophile gear, the DAC circuit is much more complicated and could cost tens of thousands of dollars.

Yes, the quest for audio perfection is an expensive one. Don’t say we didn’t warn you. 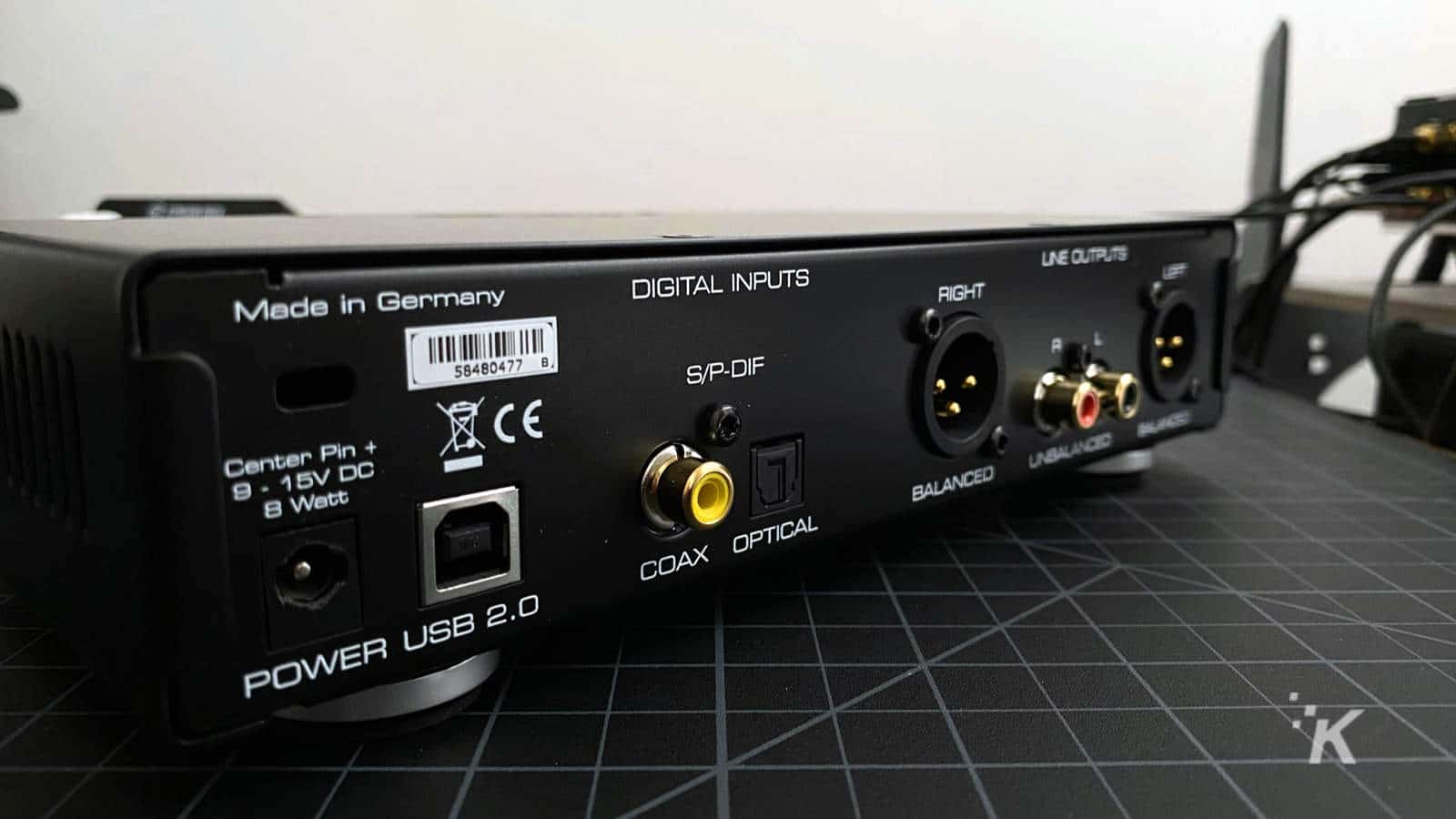 Well, first it’s time for a little history lesson. When the first consumer CD players arrived in the ‘80s, the DACs used in them were pretty terrible. We all know that if there’s a gap in the market, someone will fill it, so the first standalone DACs were born. The need for an external DAC has waned somewhat in recent years, as the converters used in most audio gear is much higher quality, but there is still an audible difference between a standalone unit and an integrated one.

The ADI-2 DAC is what is known as a ‘half-rack’ unit, measuring at half the size of many audiophile units at only 8.6 inches. It’s in a hardy steel chassis, and will probably outlast most of your other equipment.

Its purpose? To do reference-class conversion from either SPDIF (coaxial or optical) or USB 2.0 inputs. You can output to balanced XLR, unbalanced RCA, or to both 6.35mm headphones or 3.5mm IEMs. That last one is special, as the output RME has used is drops the ground floor noise by 10dB over the 6.35mm output, removing the dreaded hiss that IEMs can show off in most headphone outputs. It’s also lower-power, so you don’t run the risk of popping your expensive IEMs.

One last thing before we move on. That 6.35mm headphone jack has a mute relay that kicks in just after the headphones are plugged in, which slowly ramps the volume back up to the last used state. No more breaking your eardrums if you forget what volume you left things at. Nifty.

All of the inputs on the back from the RCA SPDIF to the TOSLINK optical to the USB-B 2.0 input support sample rates between 32 and 768 kHz, something nice to see as the inputs aren’t always equally capable. The power jack is also pretty special, accepting any 8V – 28V DC or 8V to 20V AC adapter, either on 100 to 240 VAC. Yes, that will work with pretty much any wall-wart you can find.

Okay, flipping it around to the front we get some fun stuff. A largish power button with a nice white ring around it, the two headphones outputs, and a panel of controls. RME has added a large color LCD screen that by default shows the ADI-2’s output, volume, sample rate, and a 15-band spectral analyzer. It also shows the menus when you’re changing something, and there is a small six-segment stereo level meter that shows the last recent peak.

Buttons navigate to the four settings sections, letting you do volume adjustments, sources and destinations, tweak the tone, and other setup tweaks such as the five DAC filters. You can set the ADI-2 to turn all of the lights off after ten seconds if you don’t like the light show, and touching anything brings the lights back on for another ten seconds.

Oh, and there’s a remote control for pretty much everything.

So, how does it sound? 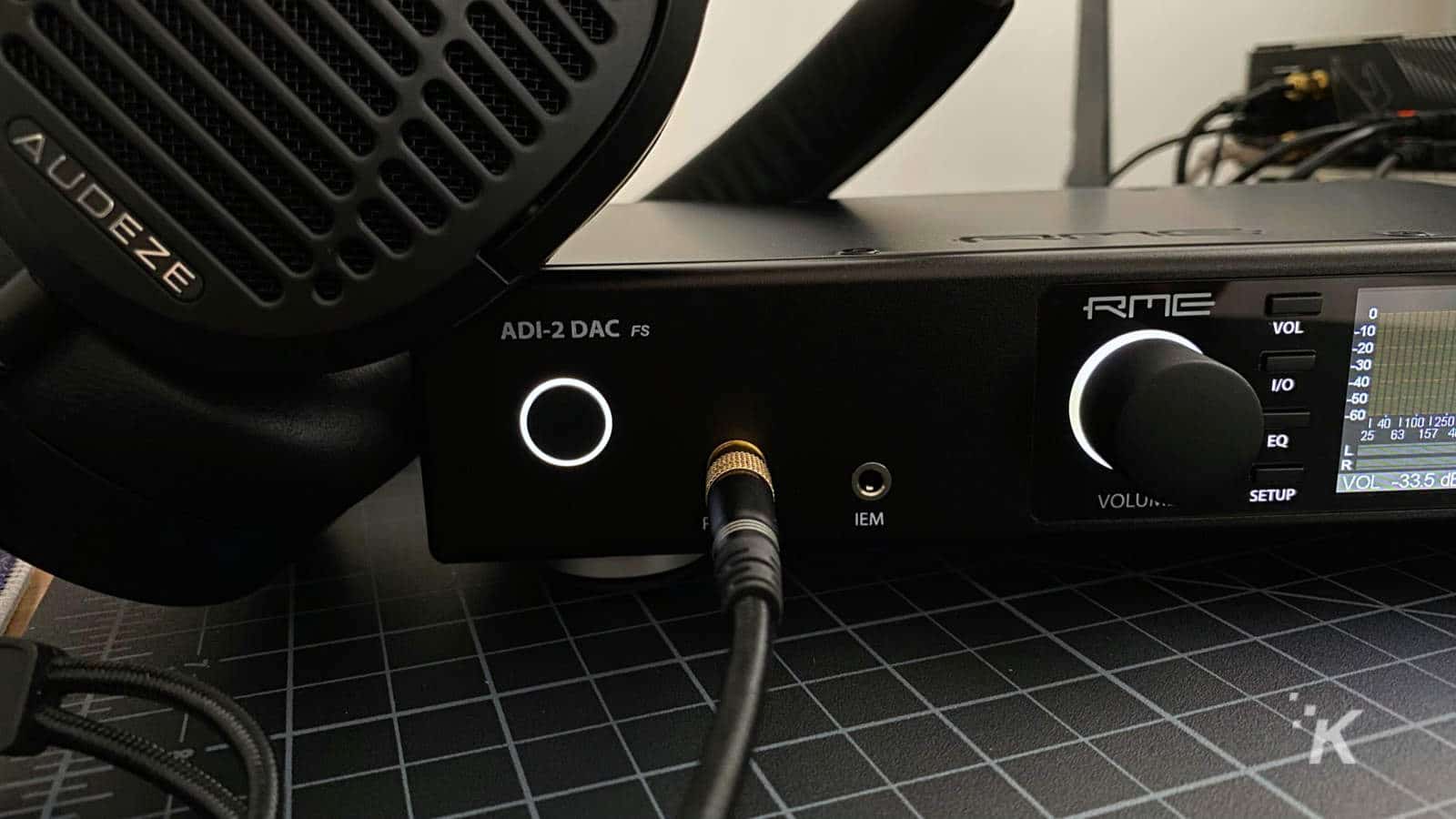 Well, before we start to talk about listening prowess, there are still a few things to talk about. RME are masters of audio transport, and the ADI-2 DAC brings all their knowledge to the table. There are Bass and Treble tweaks, all with adjustable gain and frequency. Then there is the Loudness adjustment so if you are listening at low levels, it raises the bass and treble response to account for the perceived acoustic changes. RME even added a five-band parametric equalizer so you can filter out undesirable parts of your music. If your music source has artificial surround added, you can remove it with the Crossfeed adjustment so it’ll sound more natural on your headphones.

Ah, time for some music. The ADI-2 DAC is completely transparent to your source material. I mean, completely. That might not be the best thing for home use, as streaming services compress their recordings to sound good on lower connections or bad headphones.

For professional, mastering use though it’s superb, letting you hear the recordings as recorded, so the only tweaks are the ones you create.

Okay, but should I buy the ADI-2 DAC?

Ah, the essential question. See, the ADI-2 DAC isn’t really aimed at me and you. It’s a scaled-down version of RME’s production DACs, which are created for purity of sound, as a reference source for mastering. Do we need that level of accuracy at home? Some would say yes, and those people should absolutely check out the ADI-2. For everyone else, there’s a plethora of lower-cost DACs on the market.

We’d love to see RME switch out the USB-B connector for something newer, maybe USB-C or Thunderbolt for convenience with newer computers. We’d also love a concise “quick start” section in the manual because not everyone wants to dive through pages of technical data. Then again, that is RME’s target market.

Oh, and if you want to absolutely squeeze the most out of the ADI-2? Use it as a DAC only and hook it up to an amp of similar prowess. The headphone output on the ADI-2 is great, but you’ll almost always benefit from using discrete components.

The Good
That display. Seriously.
Dedicated IEM output with lower noise floor
Advanced DSP functions
Technically flawless
The Bad
Might be too technical sounding, depending on your listening preferences
Ooft, that price
8.2
Overall
Related Topicsadi-2AudiodacEntertainmentGadgetsNewsReviewsrme