Power stations are built to be reliable, and they’re more reliable than any power bank that you will purchase. 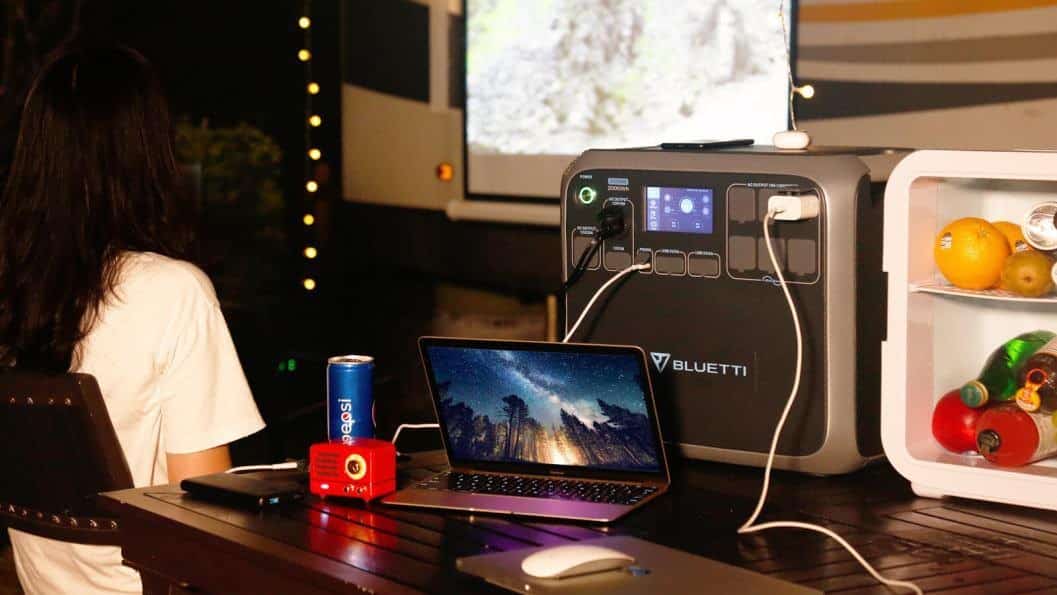 In this review, we’re taking a close look at the Bluetti AC200P 2000Wh portable power station. This is truly one of the most reliable portable power sources that you can get on the market, and that’s because of its enormous power capacity, many options for powering and charging devices, and also has an intuitive screen that allows you to view stats as well as controlling a few functions for the Bluetti AC200P.

Faster, or more power-oriented parts of using this power station will give you less power capacity to lose as there is more heat generated.

If you’re more accustomed to using Mili-Amp Hour (mAh) to measure power capacity, rather than Watt Hours (Wh), as it’s used prominently with power banks, then you can tell that 540,540mAh is a very VERY high power capacity.

This is a measure of power that you’ll be able to use when it comes to charging from the USB-A and USB-C Power Delivery port on this power station. However, the power station charging power may vary as it’s able to charge at higher voltages when charging certain devices.

Overall, if all you’re doing with this power station is charging smartphones, or tablets while you’re out camping, or on a road trip, then it may very well last the entirety of your trip. This is because most smartphones on the market now have a 4,000mAh battery, with a 540,540mAh power capacity that you can use, this means that you can get one hundred or more full charges for a single smartphone. Even splitting those full charges among two, three, or even four phones, still means that this power station can last for many days or a week of constant use.

On the other hand, if you’re using higher power usage methods from this Bluetti power station, then you’re going to be getting less power capacity to use. In this case, we’re calculating how much power capacity is available to use when it comes to using a power output of 14.8V.

This substantially lower power capacity to use comes from more heat being generated, and with power being transferred faster from one device to another, power is lost during the process of charging and powering. By using a 14.8V power output, you are losing a good amount of power to use, but at the same time, it’s still higher than most other power stations and you’re able to do a lot with it.

With a 135,135mAh power capacity when using the DC or USB-C Power Delivery ports, you’re still able to charge laptops to full power many times. If we’re assuming that, at most, a laptop has a 7,000mAh battery capacity, then this means that you can charge a laptop to full power about nineteen times. This means you can charge a laptop for more than two weeks straight without having to recharge the power station.

Even if you’re charging, or powering other devices with the other ports or AC outlets, there’s still a ton of power to go around that can last for about a week. Having a “Lower Capacity” isn’t exactly a thing in this case, because you still get so much from using the power station.

The type of charging and powering features that a power station has been one of the most valuable parts of it. Sure, the power capacity is important because it dictates just how long you’re able to use the power station, but how you’re able to utilize this Bluetti AC200P power station is something that few others are capable of doing on the market. If any. There are a total of seven-way to use this AC200P and in all, you’re able to charge and power 17 devices at the same time. Sound impressive? It is.

First, the basics. The AC200P gets the basics perfectly, and that’s because it has a total of four USB-A ports and a single USB-C Power Delivery port.

When it comes to charging smartphones, the Power Delivery port is also able to charge USB-C smartphones and iPhones at their max speed, too.

There are two 12V/3.0A DC ports on the AC200P, and overall, DC ports can be useful if you have something to charge or power them with. In this case, the 12V/3.0A DC ports are going to be most useful when it comes to charging laptops that also use a DC barrel charging port.

The 12V/10A DC port is the same port that you’re able to find in most vehicles, and in this case, you would use this DC port for powering appliances. The most common appliance that we can think of when it comes to using the DC carport is a portable air tire pressure pump. These pumps almost always have a DC cable that can be plugged into this 12V/10A carport.

One other DC port on this AC200P is the 12V/25A port, and this port has a ton of power and it’s mainly useful to power RV vehicles, and by doing so, it’s able to power quite a few appliances inside your RV.

The most impressive part of this Bluetti AC200P 2000Wh power station is the use of its six AC outlets. There are very few portable power stations on the market that use six AC outlets, with most of them using either one or two, max. The other great part is that the six AC outlets share a massive 2000W power output.

Six AC outlets that share a 2000W power output enables you to power six appliances at the same time, meaning that you can have a Magic Bullet blender, a fridge, charge a laptop with a laptop charger, power a lamp, a mini fan, and a mini electric grill at the same time. With all this being powered no matter where you are with the AC200P truly makes this Bluetti power station one of the best on the market.

Another thing to add is that each of the six AC outlets is three-prong plugs so you have a more free range of what you’re able to connect to the AC outlets.

The output of this AC200P is powerful and there are many options. On the same note, the input for recharging this power station is just as good, and that’s because you have five options to recharge the AC200P.

The good thing is that the AC200P comes with the AC and car charger. The one other more accessible way of recharging is by using a Solar panel, but this unit does not come with Solar panels. However, the AC00 does come with a Solar panel adapter that you can use to plug into Solar panels.

The two other methods of recharging this power station are not the most common and are ones that you likely won’t be using but are always there to use. One would be using a Gasoline or Diesel generator to recharge the AC200P. The other would be using Lead Acid batteries to also recharge the unit.

Before purchasing a portable power station it is important to acknowledge that it will be large and heavy. Portable power stations are not be held for a long duration of time and are more meant to be stored in case of an emergency or those places and times where you don’t have access to a stable source of power such as a wall outlet.

That’s the case for this AC200P power station as it has a length of 16.5 inches, a with of 15.2 inches, and a height of 11 inches. Most importantly the AC200P power stations weigh 57 pounds. It’s very heavy and when it comes to picking it up we highly recommend that you pick up with your legs first and then your back. Once again, this is not a power station that you can hold for a long time, and it’s meant to stay in a single place when it comes to using it because of its larger size and heavyweight.

Even with all of its features, using the AC200P power station is quite easy. All the output ports are at the front of the unit other than the two wireless charging pads at the top. The two input ports for recharging the power stations can be found to the side.

The build quality of this Bluetti AC200P power station is great, and it’s on par with many of the other power stations that the brand has released. When all the ports are covered with their cover guards, then the power station does have a bit of water-resistant. On the shock-resistant side, well, there isn’t much shock-resistance, but these power stations are built well enough that you can place it into a trunk of a car and still not worry about it sliding and bumping around.

You also get three types of DC ports that can prove useful for charging or powering certain devices and appliances. With all of these ways to use the AC200P and combining it with the massive 2000Wh power capacity, using this power station is like taking your home with you no matter where you are.

There is a ton of power to use, with a 2000Wh power capacity that can charge smartphones into the hundred range and six AC outlets with a 2000W max output.

Power stations are going to be large and heavy. That’s the case with this AC200P that is a large block that weighs about 57 pounds. Even though the power station is large, it’s easy to use with everything being quite organized with its placement. To add to that, there is a Touch LCD screen that power stations, in general, don’t use at all.

The build quality of this power station is good, especially on the inside because there is a fan that has a low and high-speed setting depending on the output and temperature of the internals. On the outside, the AC200P power station is also built well, but it’s not a rugged power station, at the same time it can still take bumps and light falls.

This is a very reliable power station, it has high power capacity, many charging ports, and most notably the six three-prong AC outlets with a 2000W combined power output. Being able to power six appliances at the same time can be dream-like if you’re someplace where you don’t have access to a stable source of power.

Bluetti has done a lot in the portable power station space, and they’re pushing what power stations are capable of with this AC200P. It has everything that you would want a power station to feature with its high power capacity, many, many charging and powering options, and innovative design that makes use of a touch-screen for certain controls. It’s one of the best out there, and if you’re looking for a power station that is capable of doing it all, then the Bluetti AC200P is it.