AMD stirs up the CPU market with Ryzen

For more than a decade, we have been at the at the mercy of a single CPU manufacturer. Now that Ryzen is here, things are about to change… for the better!

For more than a decade, we have been at the at the mercy of a single CPU manufacturer. The last time there was any serious competition was back in 2005. At that time, AMD had the K8 and intel had NetBurst based Pentiums which were sub-par processors. Pentiums were hotter, slower and overall behind anything that AMD had.

However, one year later Intel released its first Core dubbed processor lineup, which almost completely ditched the P4 NetBurst architecture in favor of the older P6 which, of course, was completely reworked. That marked the beginning of a new era; an era in which Intel introduced the famous incremental tick-tock upgrade strategy and an era in which AMD just couldn’t get itself together.

About 11 years later, AMD finally managed to offer a competitive product to the market and at a lower price. Up until now, AMD was only able to compete in the lower-end markets and keep afloat; now, though, things are about to change.

AMD’s new core design is dubbed Zen. It is a completely new design that has been built from scratch for the past 5 years. The brain behind the project was Jim Keller, the man who designed the K8 architecture as well.

First consumer-focused processors based on Zen architecture that were launched were Ryzen 7 – 8 core 16 thread SKUs. The success of the launch was so big that AMD’s stocks were worth 700% more on the launch date than the year before.

More than a month after launching the high-end lineup, AMD released the mid-range R5 CPUs. R5 lineup consisted of 4 different models with different frequencies and TDP configurations as well (see the table below).

The models bearing the X designation have AMD’s new technology called eXtended Frequency Range (XFR). This feature basically allows the CPU to aim for higher clocks than designated by turbo frequency. The system would monitor several different factors and if the situation allows it, boost beyond the turbo limit.

Launching a new product is not enough to increase a company’s valuation sevenfold in a single year – the product has to perform well. Early statements from AMD said that the new architecture will bring 40% IPC improvement over the previous Bulldozer architecture, among other improvements. However, this was the most important piece of news since AMD’s main problem was low IPC when compared to Intel.

In the end, that was not true. The truth was that the IPC was 52% better – something that even the biggest optimists couldn’t have hoped for. IPC improvements in conjunction with other architectural features made Ryzen perform on par with Intel’s latest CPUs in multi-threaded operations, with a slight disadvantage in single-core performance.

According to techpowerup in productivity tests, Ryzen is victorious; nevertheless, when it comes to gaming in lower resolutions (lower resolution gaming puts more strain on the CPU) Intel’s i7 7700K is still the safest bet. In higher resolutions, though, the situation is pretty much the same across the board, where even the cheaper Ryzen 5 1500X is equal to the 7700K which costs almost twice as much. 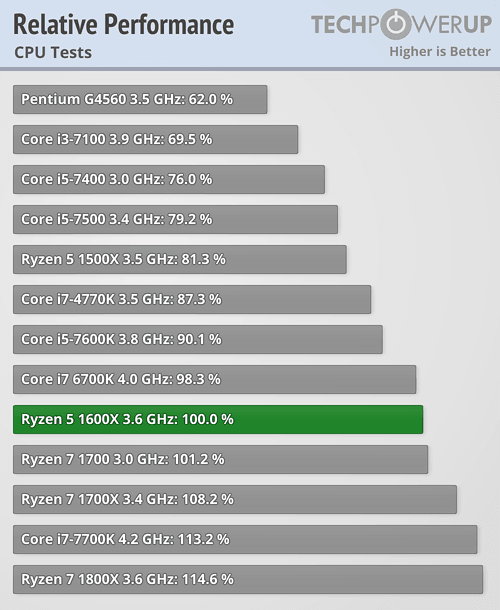 While 1800X brings us the performance of a thousand-dollar Intel CPU for half the price, and it’s pretty much the same with other models, not everything is great. Being that it’s a completely new architecture and a 14nm Fin-Fet fab which AMD hadn’t previously used for CPUs, overclocking potential is almost non-existent.

You’ll be able to get a few hundred MHz from models with lower base clocks, but the models which are already aggressively clocked have little headroom. In some cases, users reported that in order to pass the 3.9/4 GHz barrier you’d need voltages higher than 1.4V when reasonable operating voltages are in the range of 1.35V. So, if you plan on draining every bit of strength from your CPU, you’d better forget about that with Ryzen at this moment, and turn to the i7 7700K which easily reaches 5GHz.

Also, another drawback that we’ve seen so far is problematic compatibility with some DDR4 memory modules. They either can’t work at all or can’t operate at higher frequencies while maintaining the T1 timing which AMD’s new memory controller prefers. So far, it is known that almost all Samsung B-Die chips are compatible, so if you’re after Ryzen, consult with the motherboard’s QVL list prior to purchasing the RAM.

For the first time in many years, the future for AMD is bright. They have laid the foundation for their next generation of CPUs and all that’s left is to grow upon that foundation. We already know that at least 4 generations of new CPUs from AMD will come for the new AM4 socket and that they will all be 14nm Fin-Fet fab based SKUs. The next revision of Zen is already in the works, it is called the Zen+ and is expected to arrive earlier next year.

Besides the consumer models, AMD also presented its new server chips labeled Naples. Naples presents maybe the biggest win for AMD for a very long time. The platform is based on two 16 core chips packing a total of 64 threads, 128 PCIe 3.0 lanes and support for up to 2TB of RAM, which is more than Intel in all respects. This is great news for all IT services providers since, in addition to ARM-based servers, Intel now has another capable competitor.

Probably Intel itself wasn’t expecting such a success from AMD. But, Intel wouldn’t be where it is if it waited for its ship to come in. We already know that they are preparing a suiting response. The new X299 HEDT platform is in the works and is expected to launch for sale June 26th. The lineup will consist of 10 core, 8 core, 6 and 4 core SkyLake/KabyLake X processors with prices starting north of $300. This is probably one of the most interesting years in the CPU market ever, and we hope that this war in performance, and more importantly in prices, continues for years to come.

Blake is a content marketing expert and a tech aficionado. He spends most of his day in front of a computer.