Who do you think would win at deciphering song lyrics? Man or machine? We put that to the test with this infographic. 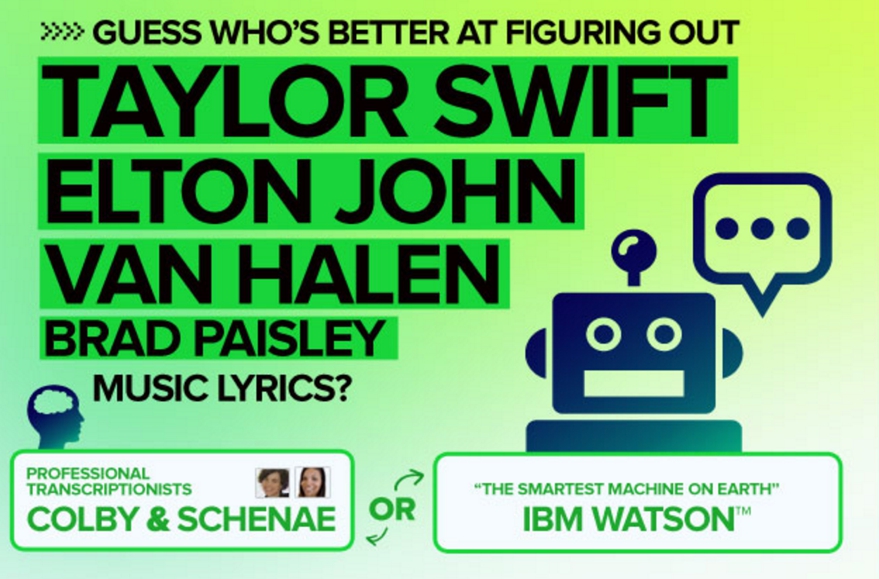 Most people have experienced a cringe-inducing moment when discovering that the lyrics that they have been singing for years and years are completely and utterly wrong. Creedence Clearwater hasn’t been singing about “There’s a bathroom on the right” after all. With the knowledge that humans will likely bungle lyrics, an established transcription firm decided to have a friendly competition of man versus machine. Would the “smartest machine on earth” the IBM Watson be able to guess song lyrics better than two top professional transcriptionists?

To level the playing field, the transcription team removed the musical tracks in order to not interfere with Watson’s ability to accurately decipher the lyrics. The transcriptionists promised the songs used in the contest were new to them and that no secret Google searches were used to increase their chances of guessing the lyrics correctly.

Four songs were chosen for the showdown with each song highlighting a different genre. First up was the pop goddess Taylor Swift’s “I Knew You Were Trouble.” How would IBM Watson’s speech to text feature fare when tackling Swift’s song about getting romanced by a bad boy? Round one didn’t start off with a strong showing from Watson. The computer made a complete mess of the lyrics by transcribing that Taylor is singing “You got me a loon” in lieu of “You got me alone.” Watson’s version makes the song much darker. Out of the five lines and 26 words played for Watson, the computer made four glaring word errors and left out a total of six words. Professional transcriptionist Schenae won the first round by achieving a perfect score: no errors and no words left out of her final transcript.

Could Watson blow transcriptionist Colby away during the next round? To shake things up, Van Halen’s classic “Runnin’ with the Devil” was the next song selection. Unfortunately for Watson, the machine was completely lost over what David Lee Roth could possibly be singing about. With only four lines to transcribe, Watson’s text contained more errors than not. The last line used in the contest was especially brutalized. Instead of stating, “Yes, I’m living at a pace that kills” Watson’s text was a jumbled mess reading “You have some live n. n… Please start.” Colby’s lyric skills were flawless and there were no errors or omitted words in her translation.

Watson and transcriptionist Schenae were only given a dozen words of Elton John’s “Tiny Dancer” to transcribe. In Watson’s interpretation Elton John was singing about a bear that had undergone gene therapy instead of a “Blue-jeaned baby.” The final tally for round three was Watson having eight errors and skipping over three words. Schenae kept up with her perfect score.

A country-themed mash-up was used to decide the fourth and final round. Brad Paisley’s “Ticks” didn’t mark Watson’s comeback. Out of 24 lyrics, Watson scored dismally with 12 blatant errors and five words missing. Colby finished strongly and her lyrical transcription was again free of mistakes.

If Watson can’t achieve perfection while interpreting lyrics, The Terminator age may not be upon us after all. Verbalink’s contest proves that we may still need a personalized, human touch.

Tesla’s new autopilot feature is prematurely exiting drivers off the highway
Ad blockers are inevitable: How will marketers cope?