Microsoft just launched Office Lens, an app that turns your phone into a scanner. 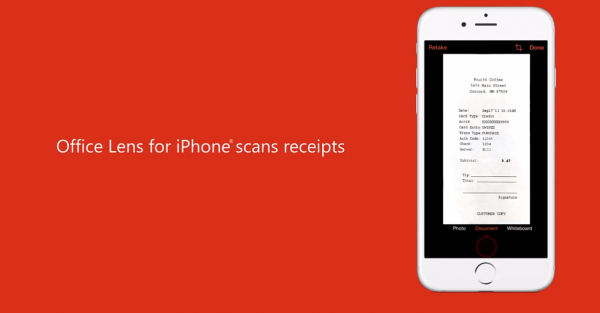 Remember that thing we used to write on as kids in school? It was white, lined, and would occasionally cut you. What was it called? Oh yea, paper.

Believe it or not, people still use it. Seems like everything we do in this day and age, when it comes to sending and storing documents or files, is all done either through the cloud, email, or some other electronic format. So what happens when you have a piece of paper in front of you that needs to be scanned and stored?

The options used to be limited to some unreliable apps that really weren’t worth your time, but Microsoft just launched a new app, Office Lens, that will hopefully improve on these previous failures. Basically, Office Lens turns your phone into a scanner. The original app was traditionally released to Window phones last year, but this time Android and iOS users get to indulge in the glory, as well.

So how it works is pretty self explanatory. If you need something scanned, bust out Office Lens and line up your shot and the app automatically crops, straightens and sharpens what you just recently captured. From there, you can save it to OneNote or OneDrive (Microsoft’s version of Google Drive or Documents), save it in a PDF format, or share it an email. Office Lens also comes in clutch for capturing business cards too.

The app is officially available on the App Store today. As usual, Android users will have to wait a tad longer for the official release of the app. However, a preview of Office Lens for Android is available, you’ll just have to sign and “become a tester” in the about section. Watch the video below to learn more.