Netflix and Twitter are teaming up to offer you reminders of your favorite shows. 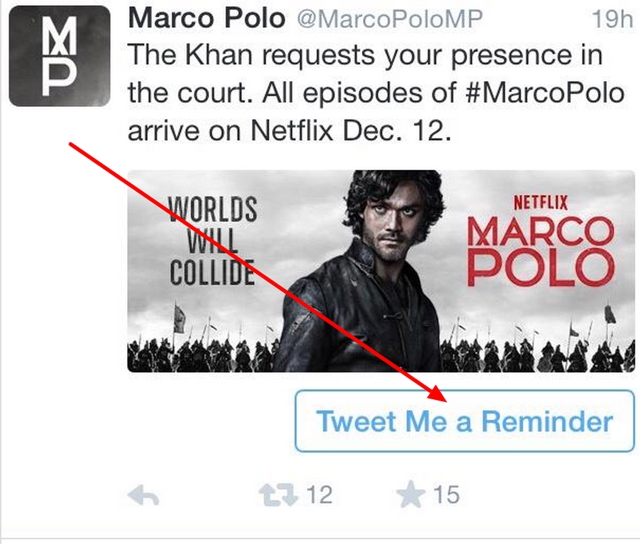 Seems like Netflix is looking to invade your Twitter stream every once in a while by tweeting you reminders whenever any of your favorite shows are being released.

Since the onslaught of video streaming services, the absence of commercials makes it kind of hard to know what new shows will be streaming soon. Back in the good ole’ TV days, we always had uninviting commercials pop up to let us know of a new series that was due to hit the airwaves soon.

If you need a quick reminder, Family Guy sums it up best here in this little clip:

Netflix and Twitter teamed up to offer the same experience, although the execution is a bit smoother.

SPOTTED: "tweet me a reminder" interesting use of Twitter by @netflix for new series @MarcoPoloMP $NFLX pic.twitter.com/1RO9hv0vdK

Twitter Cards allows websites, advertisers, apps, and others alike to attach rich photos, videos and media experiences to Tweets to drive traffic, or in this case, views.

Napier Lopez of The Next Web tested it out by tapping on the “Tweet Me a Reminder” option, and upon clicking the newly offered option, he was prompted to tweet the text in message below. After contacting Netflix, the streaming-service offered this statement:

The reminder will come in as an @Reply from the @MarcoPoloMP Twitter account, directed at each user who has opted in, as soon as the episodes are available at 12:01AM Pacific time on December 12, and will include a custom video message from the cast. 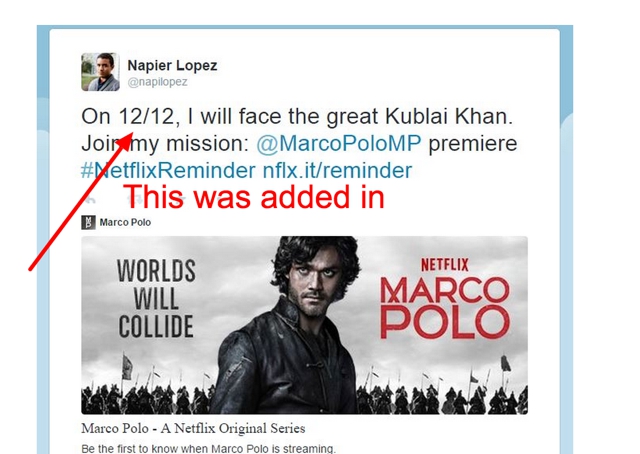 Is this just another way of brands invading your Twitter stream? No, not really. If you didn’t sign up for the reminders, then yea, that would be a different story.  One thing is for certain, this is a whole lot better than the traditional invasive ad.

If it was up to me? I’d rather have entertainment providers do all their advertising on social media as opposed to being directly in my content.  It’s not a bad idea and it’s a really great way of keeping track of your favorite individual shows.