Popular dating apps such as Tinder and Grindr may not bring the love, according to study

The online dating scene is crowded these days and surprisingly datings apps such as Tinder, Grindr, and Match are performing poorly.

The online dating scene is crowded these days and surprisingly datings apps such as Tinder, Grindr, and Match are performing poorly.

[dropcap]W[/dropcap]ith Valentine’s Day within the next few days, everyone is looking for a last-minute date so they won’t have to spend the Day of Love by themselves.

According to app quality and testing company Applause, there is only a few of them that will actually give those would-be romantics the results that they want. Out of the nearly one hundred dating apps and services, the ones with the most positive results are surprising.

Applause created a deep and involving study of the 97 available apps and services that were available through the Google Play and the Apple App Store – using about 1.5 million users’ smartphone analytics. The company also studied the reviews of each app that had at least 10,000 app store reviews. 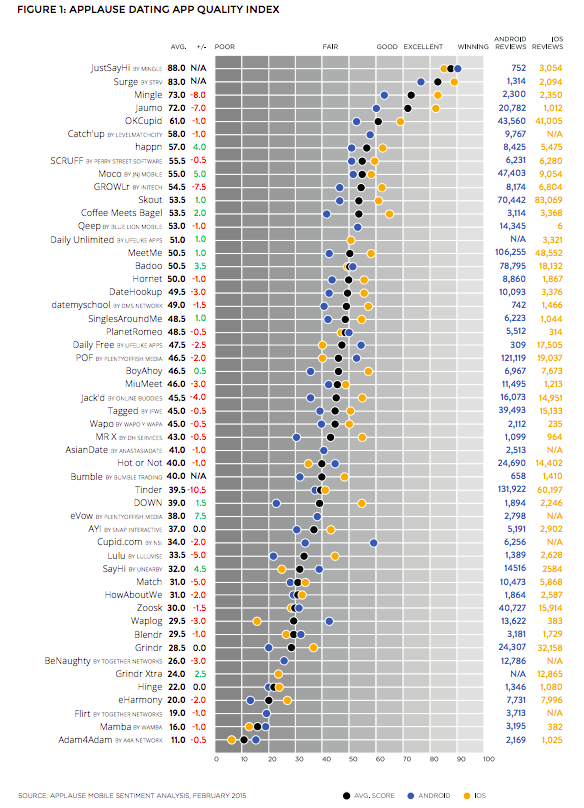 The results from Applause’s study among the near hundreds of dating apps. Image and results provided by Applause.

The results are in…and obscure is the way to go?

The top two dating apps that had the highest satisfaction rate among their users were JustSayHi, which is powered by another online dating service called Mingle. The second place victor is Surge. Each app scored 88 and 83, respectively. The two apps also did not have any changes from last year’s score and have very little downloads. Especially compared to the majority of the apps on the list.

With that data, the study’s documents that the company released showcases each app’s approval rating on a scale between 1 and 100. Tinder and Grindr may not be the best choice finding a date for many people, as new studies show that they giving users poor results. The two popular “hook-up” apps at the end of the research came up with 39.5 and 28.5. Grindr’s numbers neither increased nor decreased from the similar study last year.

However, Tinder dropped an astonishing 10 and a half points. It should be noted, this is the only significant change in numbers in the whole experiment. Tinder is also the most downloaded app and has the most reviews.

An interesting turn of events

Another fascinating result is the score for eHarmony and Match.com. Television advertisements are usually running for these two on just about every cable station. The two services may have the mainstream grasp through TV, but the two services’ apps don’t have a grasp on a positive score.

Match.com scored a 31, with a drop of 5 points from last year. eHarmony, unfortunately, scored a 20 and this is after a 2-point drop from the 2015 Valentine study. eHarmony may be the lowest ranked out of the more well-known online dating apps, based on their television presence.

Romantic dinner or Netflix and chill?

Any smartphone user out there who feels like they are having the worst romantic luck in the world through the popular apps shouldn’t feel alone. All they have to do is look for the more overlooked dating apps and maybe they can find that special someone. Maybe a user can have that dream Valentine’s Day date they always wanted, or they can always resort to the popular “Netflix and chill?”