Random Drops: Loot Crate – October “Time” + a discount on YOUR next Loot Crate Last months Loot Crate was impressive, while it didn’t really touch on a whole bunch of franchises that I was super passionate about. They announced that there was going to be a time-themed Loot Crate for October and my interest was immediate piqued. I grew up watching movies like Bill & Ted and Back to the Future, and now watch shows like Doctor Who, so this bad boy seemed right up my alley.

Turns out I was absolutely right. 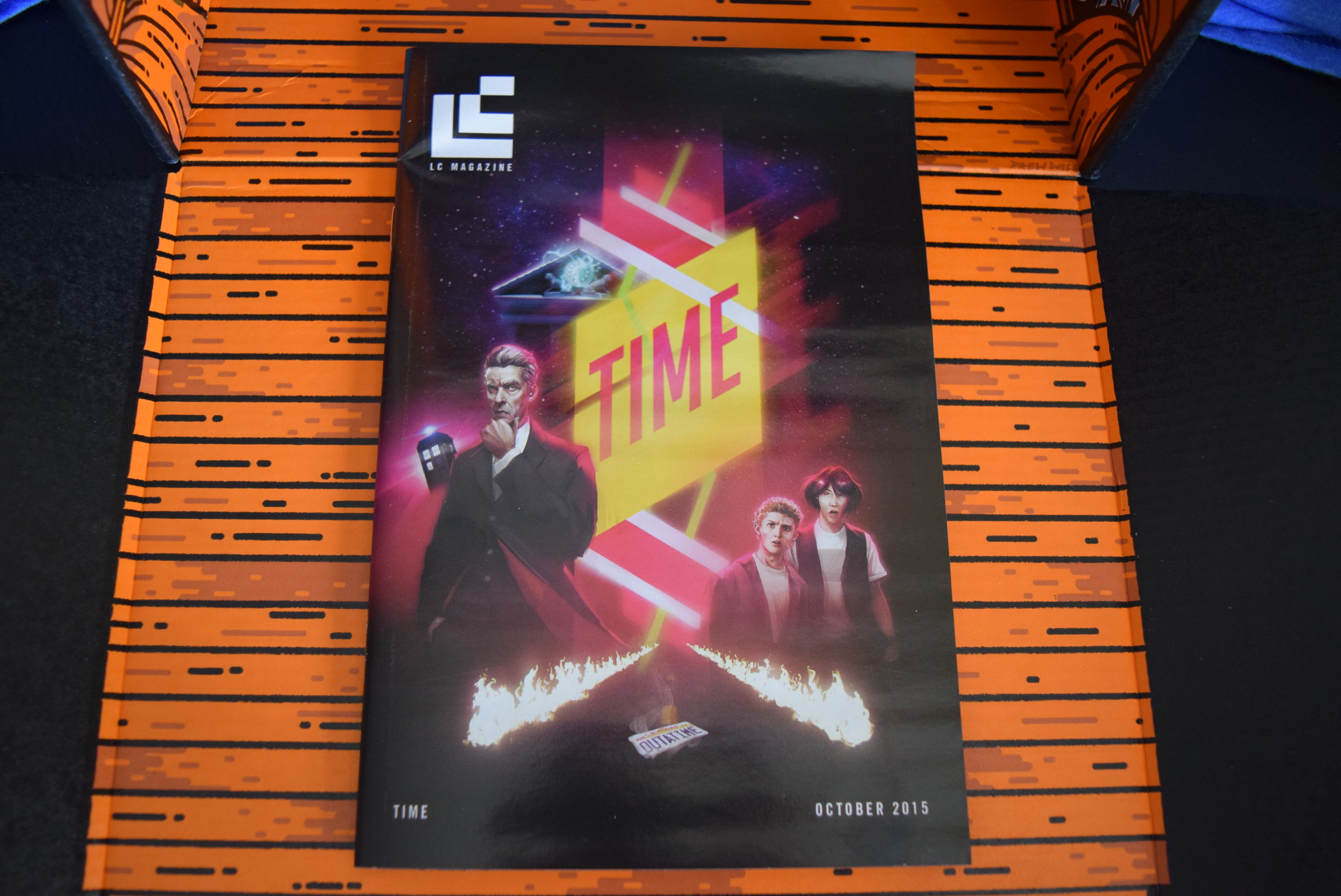 This magazine actually includes a poster of a flowchart to help you decide which of the 12.5 Doctors from Doctor Who you are most like. While it features a few costume guides for Back to the Future and Bill & Ted, there is a really interesting piece about the Loot Crate buyers and how we end up getting cool stuff each month. There was also a really cool Flux Capacitor pin, but it seemed to disappear in the time it took me to unbox everything to when I took the pictures. Trust me, it was neat. This blue retro t-shirt comes straight from Loot Crate Labs and obviously features two of the most righteous time travelers to ever hop in a phone booth. The shirt is super comfy and quite a few other 30-40 year olds commented on it as I was out and about. Yeah it is kinda awesome. Est value: $19.99 Aw yisss. Modeled after the 11th/12th Doctor’s sonic screwdriver, this utensil is probably the nerdiest thing I’ve ever received from a Loot Crate. I am perfectly okay with that as well. It feels durable, although I’m not sure I actually want to use it as it looks so dang cool. Est value: $9.99 Just in time for Back to the Future day, this Emmit Brown Pop! figure is a variant unlike any other you can find in stores. Instead of the standard labcoat or the future gear from BttF 2, this is the Emmit Brown that is at the end of the first BttF when he fries himself to make sure Marty gets the DeLorean power. Est value $11.99 Back to the Future II Hoverboard 1:5 Replica

Wow! Without a doubt, this is the coolest thing I’ve ever received in a Loot Crate. Only a fifth of the size of the actual hoverboard this awesome and certified replica comes on a stand with a mirrored base that simulates the board hovering but also allows you to show off the top and bottom without having people manhandle it. Est value $14.99

Let’s take a look at our patented Loot Score™

FIRST FULL LEGENDARY SCORE!
An amazing reminder that less than $15 a month can get you awesome stuff!

Taking a look at this Loot Crate, it was initially surprising that there were only 4 real items in it, but the surprise became elation when I saw the quality of those items. This, hands down, was the best Loot Crate we’ve had yet, and I’m excited to see how they do next month with the Battle-themed crate!

If you think you’d like to get in on next month’s Loot Crate, follow this link and use the code RANDOMDROPS to get a discount on your order. Everyone likes to save money!