Looking for a bluetooth speaker that can get the party going? The Ion Block Party Live may be your best bet. 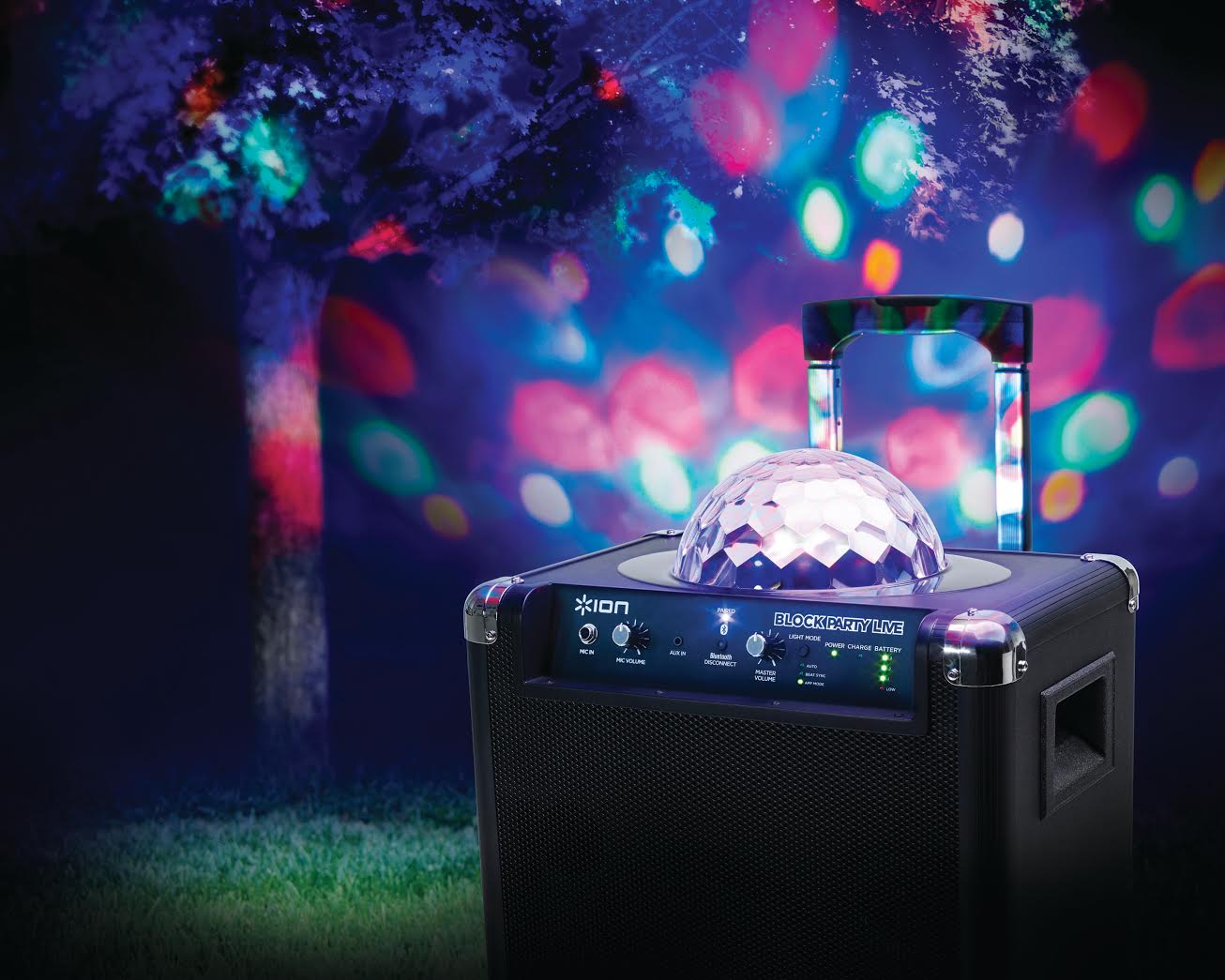 Bluetooth speakers have come a long way. I remember the days where you had to carry a boom box around at parties in order to get some decent entertainment. It was either that, or having no music at all. Thanks to the advancements in bluetooth technology, those days are now behind us.

There are tons of options out there when it comes to hearing your music wirelessly, but they’re all packed into tiny devices or speakers. There’s nothing out there other than a select few that give you that “arena rock” type of experience because, let’s face it, bluetooth speakers were meant to be portable. However, the sound specialists over at Ion are looking to break that taboo with their newest device: The Block Party Live.

Now before we go any further, this isn’t just a wireless speaker. No, this thing offers so much more, coming equipped with a 50W speaker, a long-lasting battery, and the coolest interactive light show a speaker has to offer. It’s great, but big enough to not be great for your car. Click here if you want some awesome Bluetooth car speakers. 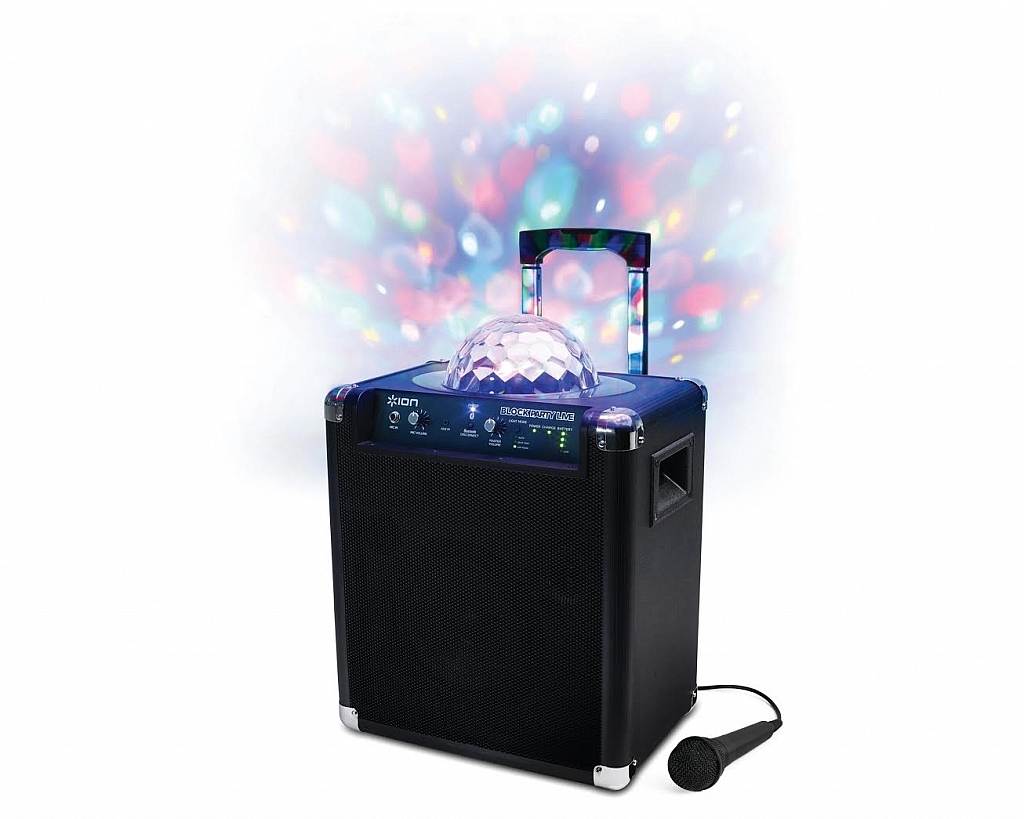 I’m not going to lie, when I first got the box I was pretty intimidated by its size. My first reaction was “this thing is a bluetooth speaker?!” After taking it out of its packaging, I was relieved that box was all bark and less bite, revealing a speaker weighing in at 26 pounds. Yea I know, you’re probably thinking that’s pretty heavy for a speaker, right? Not to worry, there are wheels on the bottom of the speaker, and an extended arm so you can wheel it around just like a suitcase. Although it’s convenient to have this option, I feel like it’s kind of necessary because at the end of the day, who wants to be lugging around a 26 pound speaker?

The speaker is built pretty tough. The corners are reinforced with steel, similar to what you would find on a guitar amp – it actually kinda looks like it could be a PA or a guitar amp.

Here are all the dials and sockets you’ll find on the front of Ion’s Block Party Live:


This part of the review is going to be short because honestly, the setup was child’s play. All you have to do is connect to the speaker from your phone’s bluetooth menu, and that’s it. It seriously took one minute to get this hooked up. However, there could be an issue with this. If some drunk partygoer finds out he can connect to the speaker painlessly, you could set yourself up for more trouble than it’s worth. There’s always that one guy.

Just like the setup, operating the device is insanely easy. Need to make an announcement? Plug in the microphone. Want to show off an illuminating light show? Tap the lighting control button to mesmerize your guests. Easy peasey.

I wouldn’t call myself an audio expert or anything, but I’m pretty familiar with it in a general sense. Playing in a band for most of your life teaches you a thing or two about sound, so I think I can offer some solid opinions here.

When I turned this bad larry on, I was really impressed by the sound. The 50 watts of power provides a level of low-end sound that lacks in other wireless speakers, with the speaker’s bass port providing an additional boost. It can get really loud, too, depending how you have the levels set on the speaker, on the phone, and Block Party Live. For example, if your phone’s volume is on full, you’ll only be able to turn the volume on the wireless speaker to about its halfway mark. Anything louder will only distort the sound. Keeping your phone’s volume at the halfway mark should do the trick.

Other than that, the sound is amazing.

If there’s one thing that impresses me most about Ion’s Block Party Live, it’s the battery. I used this thing for a week straight without having to charge it. It takes roughly two hours to get it a full charge. 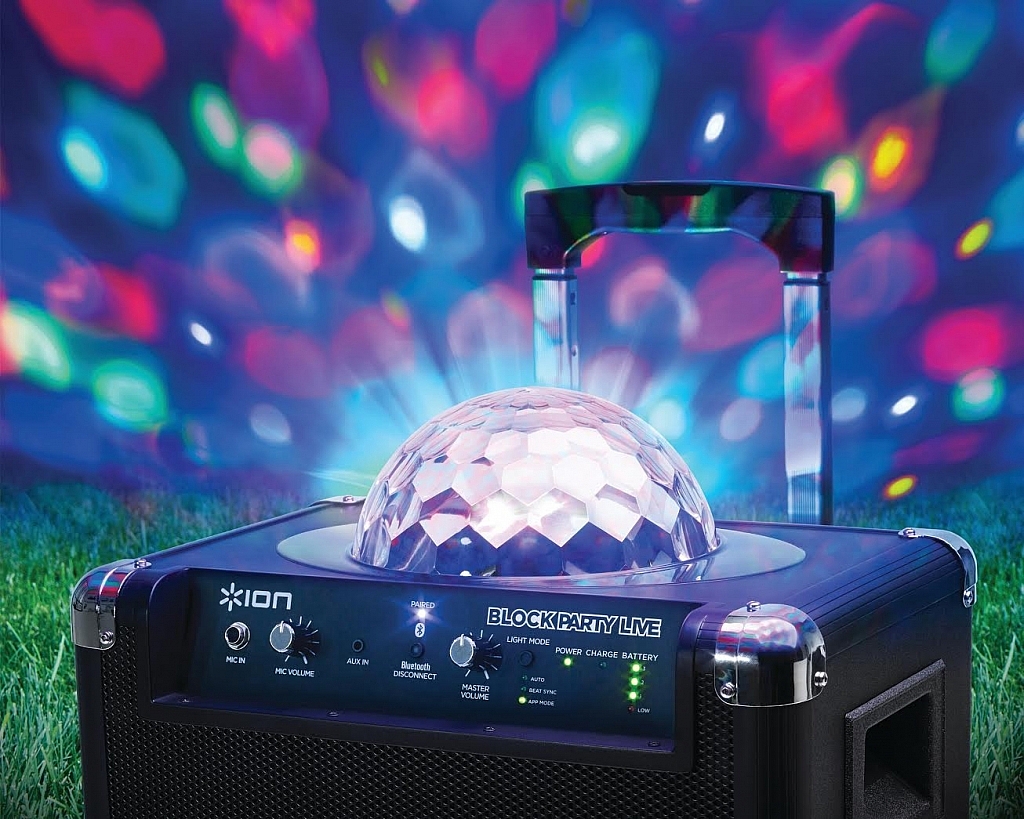 I’m not going to lie, when I first noticed the lighting fixture attached to the top of the cabinet, I felt like it was a little cheesy. But then I was reminded of the old saying “don’t knock it until you try it.” I should have held my opinion back until I tested it out because after a quick introductory light show, I was floored by its mesmerizing lighting power.

During one of the winter storms that ravaged through New England during these past couple of weeks, my girlfriend and I had a really great experience with the lightshow. We enjoyed an evening drinking wine and listening to jazz with all the lights turned off in our home – nothing but the light show. My house was illuminated with all sorts of shades of colors. If you happened to walk by our house that night you would have probably thought we were hosting a rave, but man, let me tell you, it was a really cool experience.

The Block Party Live app that’s available for iOS and Android is pretty straight forward. It allows you to customize your lighting show by selecting specific colors. You can also change the speed of the strobe or swivel. It’s really simple to use.

Is this something you should buy?

For $200 bucks you can’t go wrong. Some of the best high-end bluetooth speakers are right around this range, but with Ion’s Block Party Live, you’re provided with so many other features and options. For DJs, instructors, or someone working events, it’s not a bad deal.

Don’t get me wrong, you can still buy it purely for entertainment purposes, which is how I’m using it. I’ve shown it to a couple of friends and they all have the same reaction: “So when are you bringing this to one of my parties?”