The award-winning epic role-playing game continues with The Banner Saga 2 where the original Banner Saga left off.

2014 had a crazy cool indie release with the original Banner Saga. It was well-beloved for its wonderfully hand drawn animated graphics, beautiful soundtrack and interactive story that accompanied great gameplay. As one of the more successful Kickstarter games that has actually been able to follow through an exceed what was promised, The Banner Saga went from 1 game to an already planned trilogy.

If you have already played through the original game, you are already probably well aware of the sad ending, this is essentially the beginning of the sequel, The Banner Saga 2. 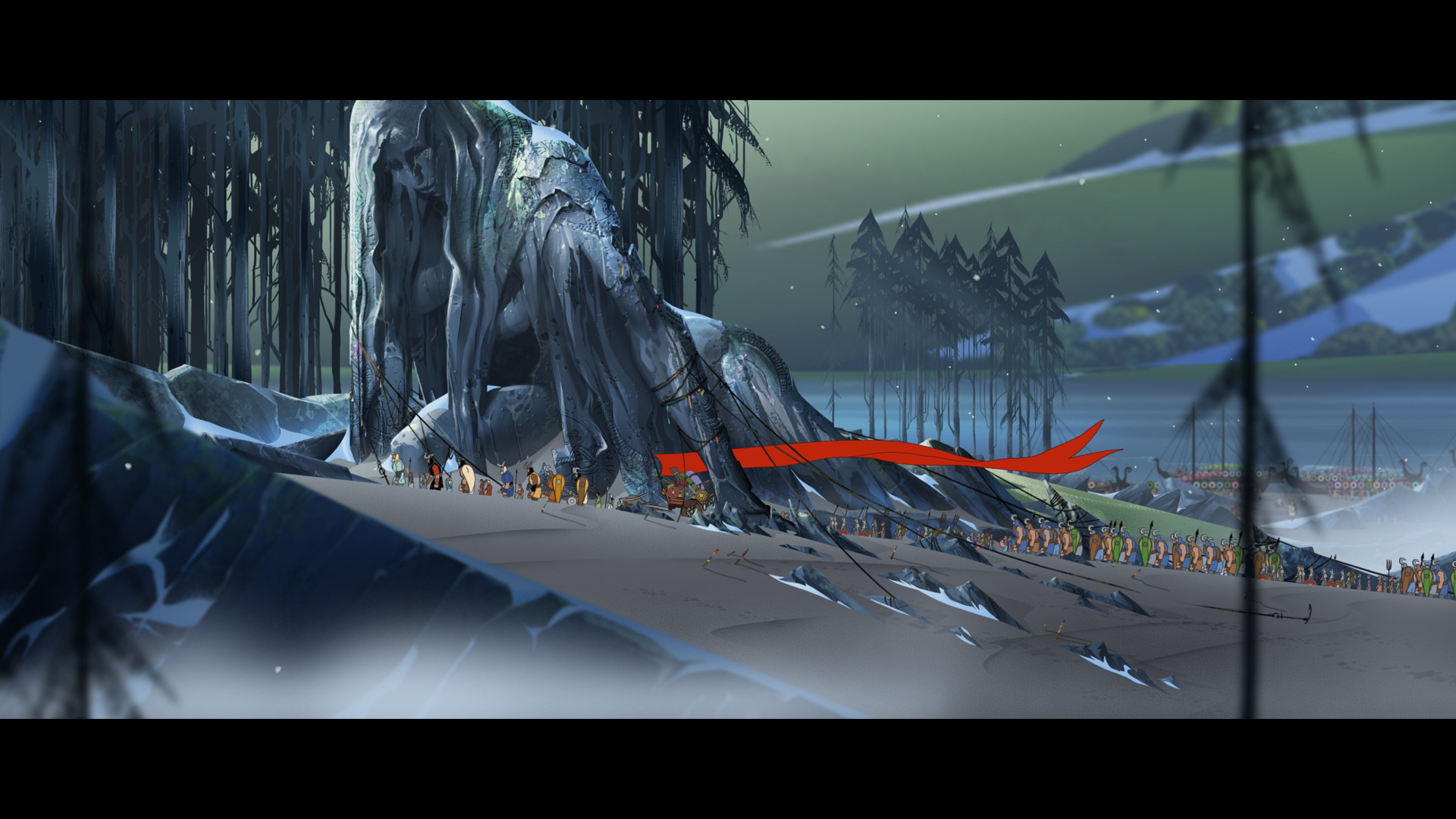 So, I want to start with the simple fact that The Banner Saga 2 is not your traditional sequel.  The first game ends with you taking down Bellower, the immortal bad guy. It comes at the cost of one of the game’s main characters, Alette or Rook. Now I beat the first game, but didn’t do it on the same account, so I was worried I lost most of the progress and story.

“The Banner Saga 2 is not your traditional sequel.”

Fortunately, for me, I could emulate Rook’s sacrifice at the end of the first game by selecting Alette as my primary character. Once the game starts, you’ll immediately notice that chapter 8 is the game’s starting chapter. Indeed, The Banner Saga 2 picks up literally moments after the end of the last game.

One of my favorite things about The Banner Saga and its sequel is that you can make snap decisions while in towns and traveling the world. These decisions allow you to shape the actual story of the world the game takes place in and the characters within it.

Banner Saga 2 is so good that it had a profound effect on my decisions.

A great example is that early in the story, you can befriend and invite a Varl and his friends to your caravan. Right before you get to the first main crossroad of the game, there is an event that requires you to make a whole bunch of decisions. At one point, I chose to put Alette’s life in danger to help push the caravan, since we were suffering heavy losses. The Varl ended up pushing the caravan forward and briefly halting further losses, at the cost of his own life. The thing there was, that character wasn’t playable and was only mentioned once before, but the writing in The Banner Saga 2 is so good that it had a profound effect on my decisions. 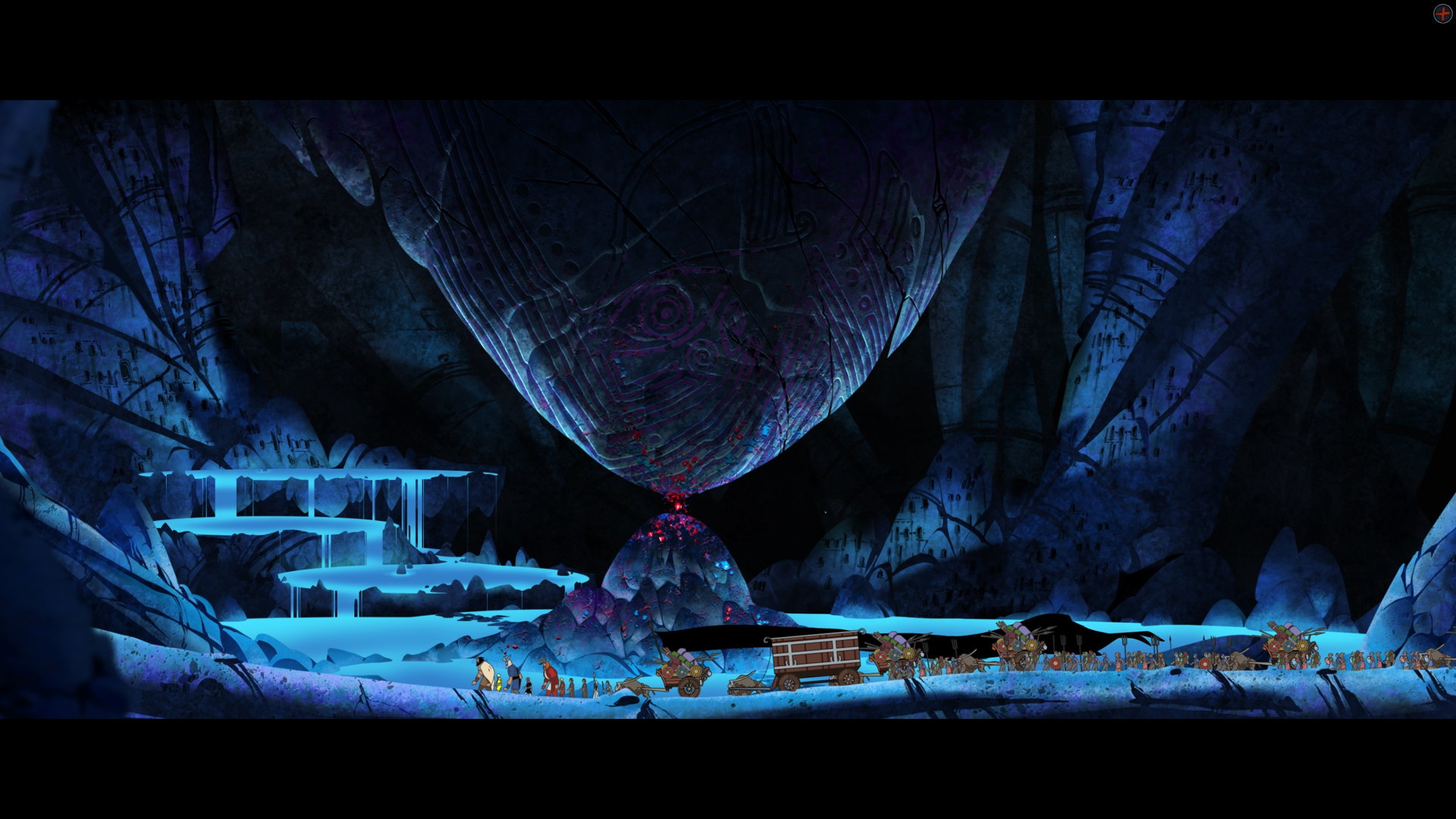 The game itself allows you to make more aggressive decisions this time around, as you also play as the Varl mercenary, Bolverk. While during Alette or Rook’s story, I felt compelled to what was best for the people, instead of myself, Bolverk’s story had me making much more brash decisions and doing things like executing those that questioned me. I disliked Bolverk for it, but he grew as a character for it. All of the characters within the Banner Saga 2 feel unique in their own ways and their roles within the story so far are memorable. No one really felt like a “throwaway” character.

Overall, The Banner Saga 2’s story is simply fantastic and is filled with beautiful animation. As the story can jump in at almost any time, I took extra time to make sure I kept my main characters healthy as possible and followed battlefield objectives whenever present. After getting through Alette’s story, I did replay some of the game as Rook, he follows the same path but instead of playing as a leader trying to find their way, his story takes more of a direction as a leader that doesn’t believe in himself anymore. It wasn’t a major departure, but it was one that was good enough to go back and experience. 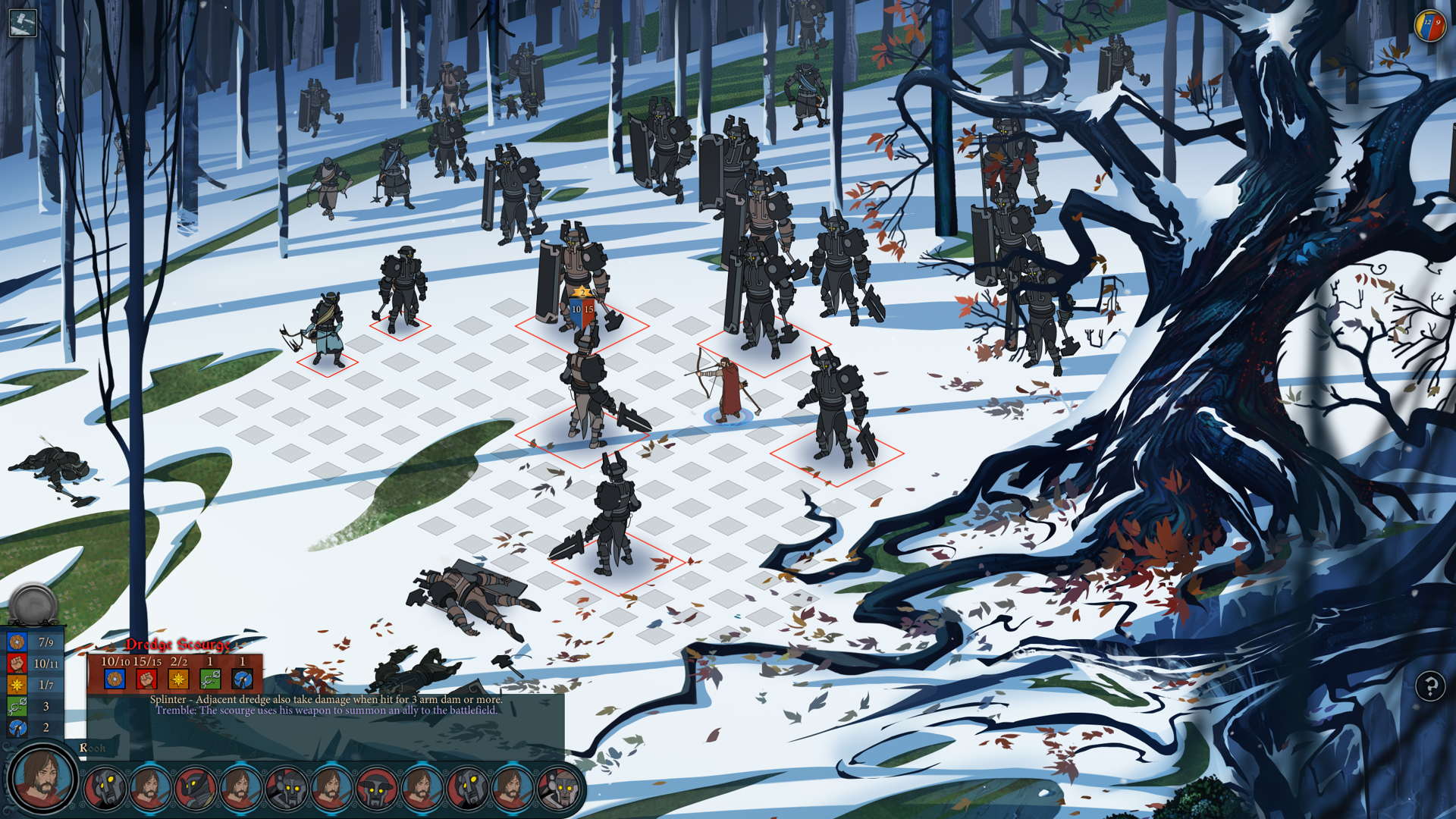 The Banner Saga as a whole showcases awesome SRPG gameplay. One thing that always got me into trouble is that you can only move your characters once per turn. This means that you can’t move a character, see what your options are, undo that move and move somewhere else. Final Fantasy Tactics and Disgaea have spoiled me.

There are some pretty big changes to parts of the gameplay as well. Some battles now have stipulations with battle objectives. These are goals within a battle that will end the battle if met. You may have to protect someone, or kill the enemy leader, doing so will be a victory. I liked the introduction of this feature because there were times in the original Banner Saga where I felt some of the battles were just too long. Some of the battles in The Banner Saga 2 create incredible odds against you, so the best thing may be to focus the target’s armor and crush them as soon as possible so you can avoid suffering unnecessary losses.

In this game, the choices you make and many of the battles really feel much more serious than the game prior. It may be because there isn’t necessarily a big bad guy to kick things off, the main characters seem to be trying to simply survive. As the split stories progress, the proverbial crap hits the fan and the world really starts to go to hell in a hand-basket. I bring this up in gameplay, because as you play the game, battle stipulations and the decisions you make outside of the battles will shape your team as you travel to the human capitol city.

Ultimately, many elements of the original game are improved, but some of these improvements come out a little forced as you get to later parts of the game and in boss fights. 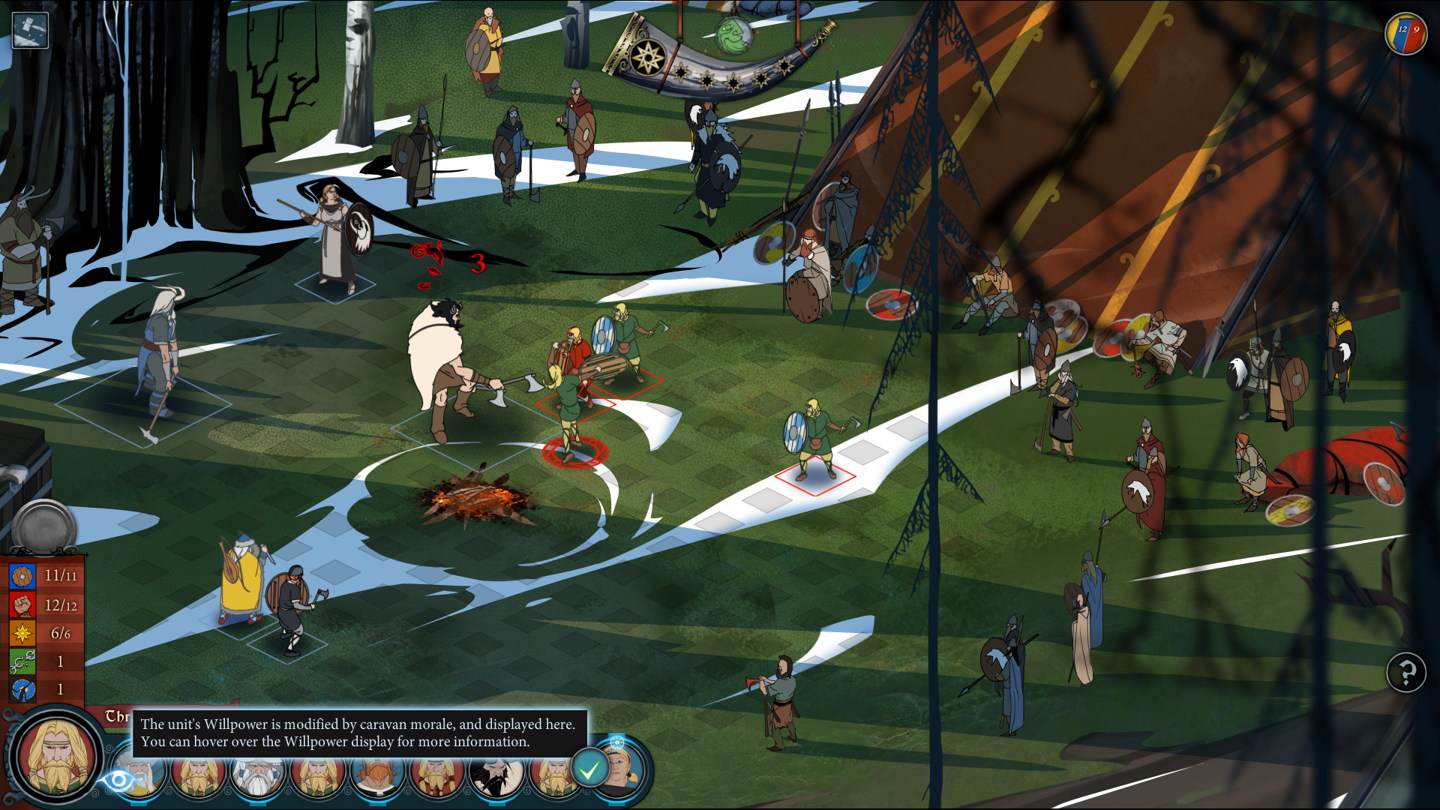 Hey, gonna keep this one simple. With a fantastic narration to guide your story, beautiful graphics and a wonderful soundtrack, this game really sets the bar high for what a game’s presentation should be. There are more scenes within this game then last game, however, a few times (especially at the end) the awesomely animated cut scenes may not always communicate what is going on overall. However, even outside of animated scenes, simple character animations and narrative scenes are equally breathtaking. This game needs to be seen and heard.

What doesn’t work so well 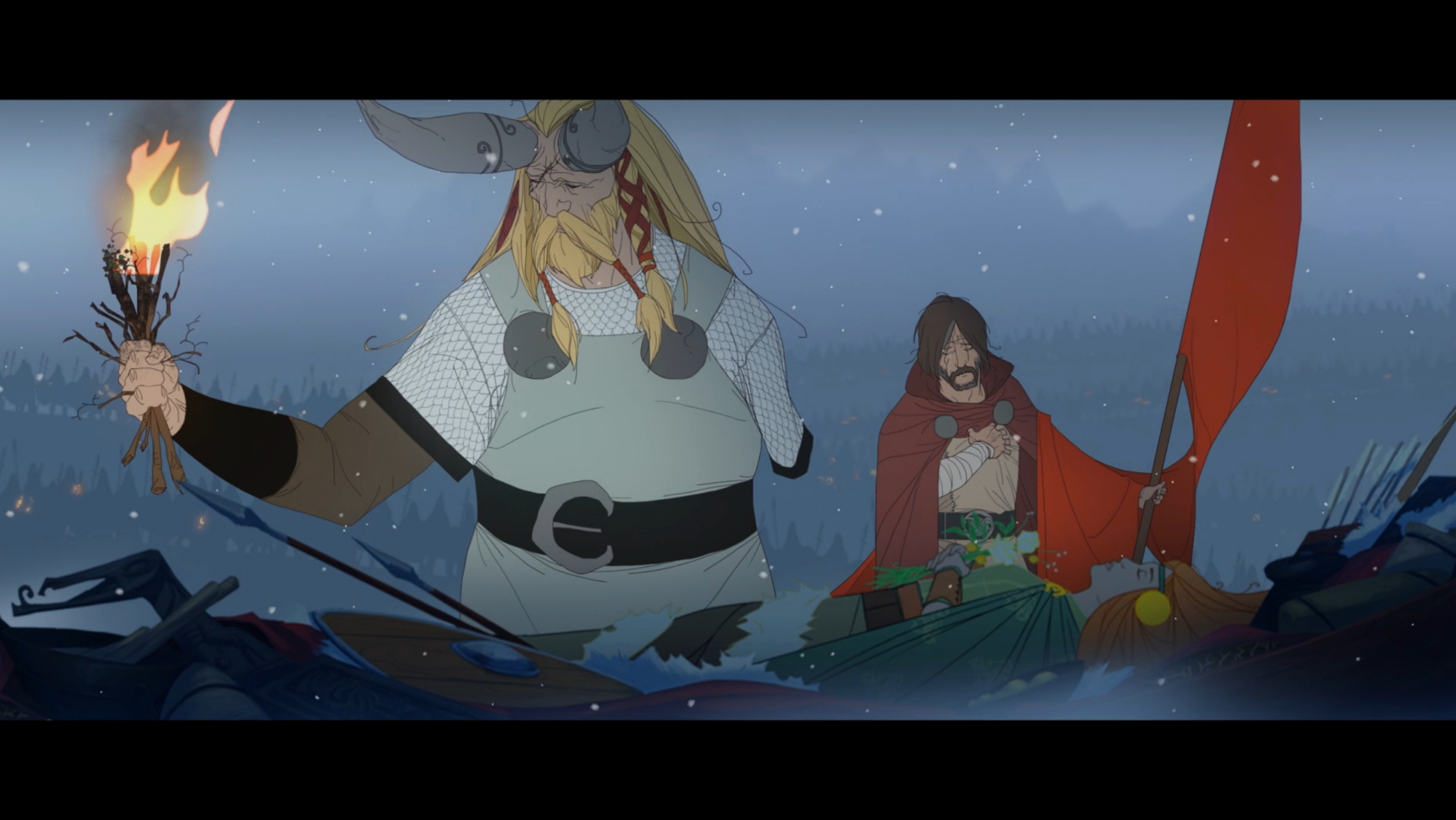 As great as The Banner Saga 2 does overall, there are some major faux pas that pepper the game enough to make points of the game a bit less enjoyable. For starters, the game introduces a major antagonist but this antagonist is dispatched rather easily and without much fanfare. Also, as it becomes clear that the game is running to a close, you also realize that this game really will end without much of a resolution with any of the 3 major plot lines. It makes the game feel much more episodic than a saga.

“It makes the game feel much more episodic than a saga.”

Also, the new stuff kind of seems a bit forced in places. As I said briefly, some battles have stipulations that involve things like map hazards that can be easily exploited due to the AI being kind of dumb. These stipulations also make some battles just feel less tactical and more of a test of endurance and hide and seek. In fact, the last 2 fights of the game are simply not as epic as the battle against Bellower. In fact both battles are less exciting than some of the first overall. The Horseborn as well ultimately feel shoehorned into the game, if I didn’t know better, it’s simply to make the Alette/Rook finale a little more manageable. 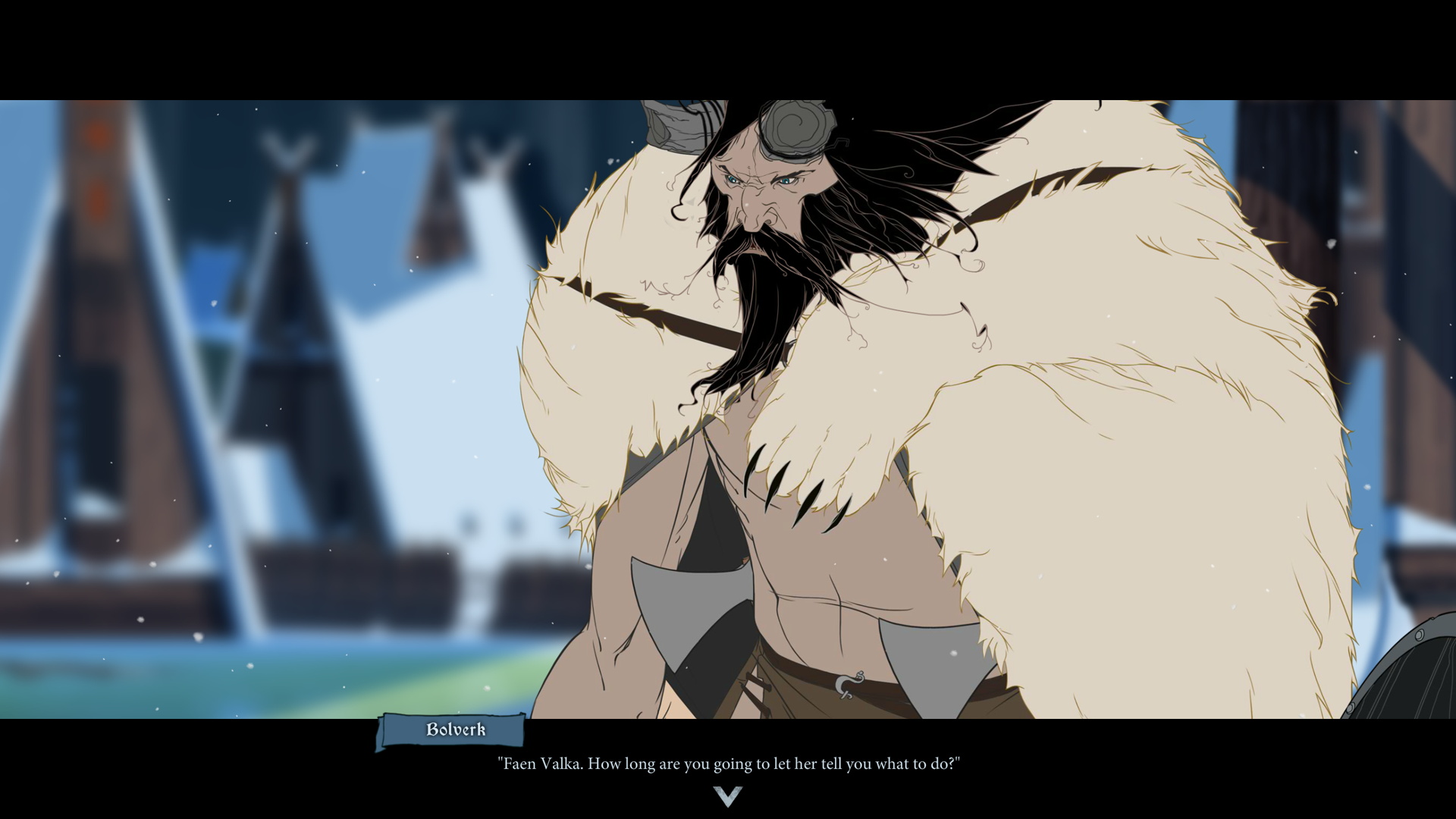 A final gripe is that these game REALLY benefits from having a full playthrough of the first. Not only does your progress directly port over, but your characters essentially do as well. This means that each caravan will feel more established because many characters just seem to pick up where you left off. Even if you know nothing of their history.

At the very end, I played through the game on easy once in full, then I went back to the beginning and selected Rook instead of Alette. After going a few chapters, it was interesting that the same game events will unfold, but under slightly different

Reader Rating0 Votes
0
The Good
This game is like playing the old Lord of the Rings cartoons.
The story is really good when put together with the first game
One of the best SRPG I've ever played
The Bad
Man, does this game feel like a filler before a finale
Some of the new stuff, including the battle stipulations, seem a little forced and annoying later
The ending battles are a bit anticlimactic. Unfortunately, the ending is more or less just as much of a cliffhanger.
8
Overall
Buy Now
Amazon
cirmustances. I’d say the change is enough to warrant taking a secondary play-through throughout the game so that you can also make some decisions you weren’t sure about on the first runthrough.
Related TopicsGameTechieKickstarterreview