I’m sure that you’ve heard about it by now, but E3 2017 was absolute anarchy for most of us this year. 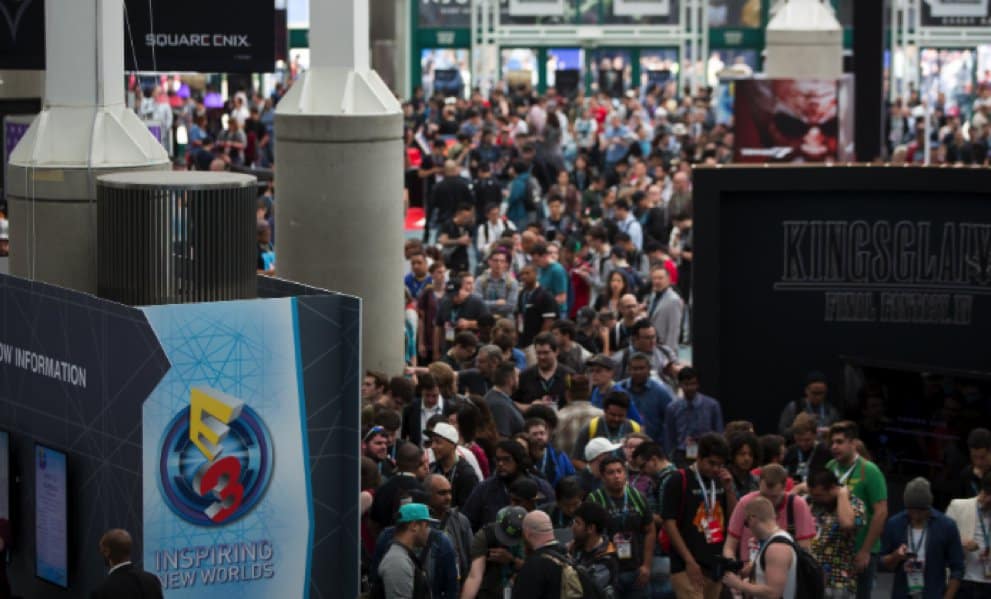 As someone that has been to most E3’s over the last decade, I could easily vouch that things were quite different as soon as we arrived at the Los Angeles Convention Center that Sunday before the show. Usually, the south hall and west hall entrances are filled with people trying to put finishing touches on the last of the displays attendees will see, with a few exhibitors and staff hurrying from one location to another.

In the past, taking pictures during this period is forbidden and if you try, some old guy will show up and tell you that you can’t do that. This year, the hall entrances were busy and filled with people looking at the fixtures and entrances to the show floors, snapping pics and trying to take in the moment. As we walked from south hall to west hall, we noticed a group of people already huddled around the charging station that is close to the concourse hall bathrooms. This was happening days before the show had even started. We made our way to the west hall to pick up our badges, as security was shooing out neon-yellow badge attendees from the press areas. 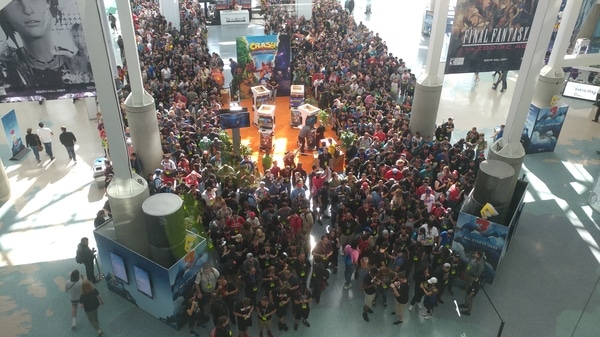 We jokingly referred to the yellow-badged attendees as “Normies” or in the case of a buddy “Mud-bloods” going forward. At first, there was some hostility towards these Normies at the event. When I say they were everywhere, I absolutely mean it. I was seeing them at LA Live, on the streets, at our hotel, I even saw them at the Xbox Media Press Conference, which was pretty odd. We chalked a lot of what we saw up to the Normies not understanding a lot of the unspoken rules at E3, but on day 1 of E3, there was no way we could have expected the sea of people that were waiting.

On day 1, we took a quick detour before going to the show as show doors open later and the only other option outside of waiting in line is to hang out in the press lounge. We went to Lucid Sound’s VIP breakfast, which was crazy packed. I decided to have a liquid breakfast and had two or three mimosas and we set off to the press lounge. When we arrived, there were lines stretching from the show floor entrances to the outside of the building. These weren’t single-file either, instead, there were masses of people tightly shoved together. One guy outside in the sun was telling me he’d been out there for an hour and couldn’t wait to get in and grab a drink. I felt bad talking to him with a mimosa in my hand that I’d taken from the breakfast. The lines looked like an over-inflated balloon about to burst and just as I was about to point out to the company I was with that things looked dire, something happened that I’ve never seen at E3. The doors opened early.

“Something happened that I’ve never seen at E3. The doors opened early.”

I was told by security later that they were told to let people onto the show floors to help relieve the lines. I don’t know if this was the truth, but I believe it as the mass of people looked like a stampede waiting to happen. The event of doors opening early caught us off guard and I downed the rest of the drink I had and we walked into the crowd from the media lounge entrance to the show floor. The number of people on the show floor was a little disorientating, or I maybe had a little more alcohol than I expected so early in the morning. Either way, it was chaos on the show floor and moving anywhere meant that you were directly touching at least one other human being.  Something of note from day 1 was that there were a surprisingly large amount of people trying to get the PDP bags that are always set out for people to put stuff in. More on that in a bit. 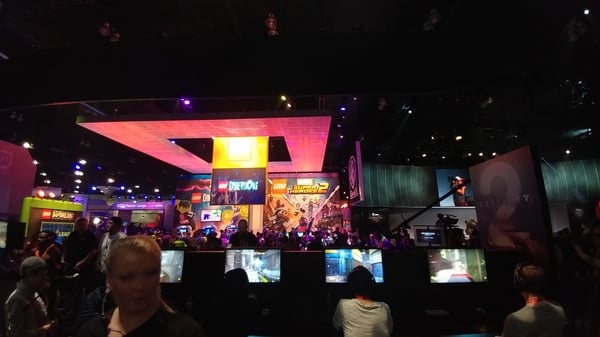 During the morning of day 2, I went to get breakfast early with the guys from RGM. We were discussing our difficulties from the day prior when a tall gentleman joined us in the elevator and immediately asked us if we were press. We confirmed with him and he broke into a sudden and heartfelt apology that caught us off guard.

He told us “I know we are ruining E3 and I am sorry that this is happening. I’ve wanted to visit E3 my entire life and I have my chance, but I didn’t know it was going to effect you guys this much.” I felt horrible, there are no other words for it. At its heart and soul, E3 is supposed to be an event for media and investors to get looks at the products that will be shaping the next year of the industry and beyond. I told the guy that it wasn’t his fault, it wasn’t the fault of anyone that bought a badge this year, they were all hopefully like him. Instead, the blame lies with the ESA, the group that puts E3 together.

“The blame lies with the ESA, the group that puts E3 together.”

As I headed to the show that day, I heard from a few people that attendance was going to be on par with years prior and the changes were just more people in common areas. I didn’t buy it, and we set off to the show. When I got to the show for a pre-opening meeting with a VR company, I was told by security that orders were to have media and exhibition passes wait in line. I walked around her and entered the lobby since she had to be crazy. 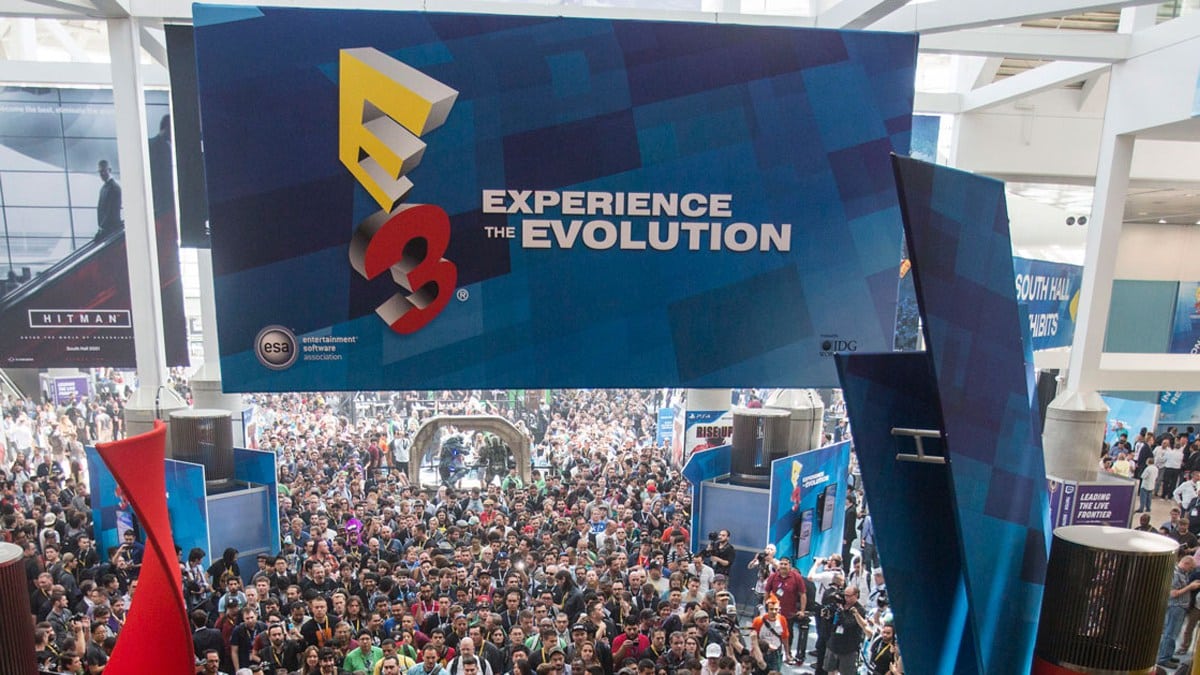 Looking behind me, I saw handfuls of press encountering the same issue, with some of them going back into the line. This showed me that the ESA hadn’t planned for the crowds they had but also likely didn’t want to anger the paying fans. Making media and exhibitors wait outside before the doors opening would help keep things calm. Unfortunately, there is an hour period before doors open that media can book appointments in the meeting halls, which hadn’t been taken into account by someone.

Day 2 of E3 was by far the oddest of any show I’ve attended in the last year. While heading between appointments some people rushed up to ask if anyone had a medical background because someone had fallen down and may have had a seizure. I couldn’t help so I moved on to my appointment. Later, I was heading to a later appointment after seeing one of my best games of E3 when a large commotion started in front of me.

“Apparently, there was a matter of a fistfight happening over near the Nintendo booth”

At a box where they drop off those PDP bags for pickup, apparently an attendee grabbed a full armful and another attendee tried to take them from him. They were wrestling around which apparently caused other attendees to get scared. At some point bags were thrown, a few landed in front of me and I picked one up without stopping. Insanity. Apparently, there was a matter of a fistfight happening over near the Nintendo booth, but I was in the concourse meeting rooms while that was going down. Finally, while I was in a closed-door meeting in the concourse, a Normie walked in and quizzically asked if they were giving things away. That was so weird because it used to be next to impossible to infiltrate the concourse hall. 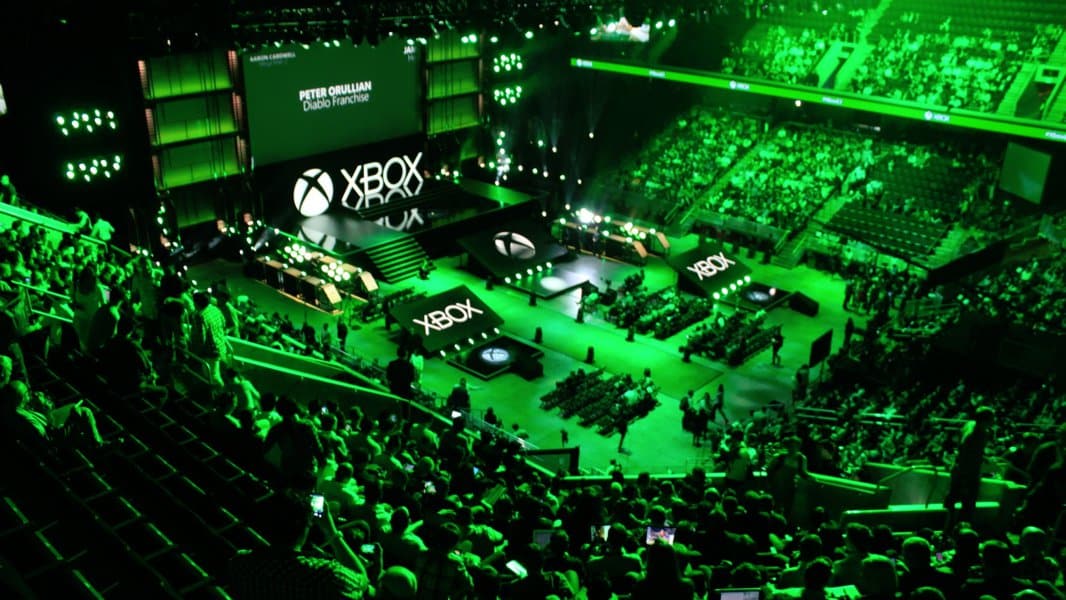 I reached out to Dan Hewitt of the ESA to find out a little more about what they thought of the E3 insanity. This is what he told me:

“Attendee and exhibitor security is a paramount concern for us. We have had well-trained security personnel onsite every year. For 2017, we undertook a number of measures—both public and behind-the-scenes—to maintain that commitment. This was my 14th E3 and as ESA’s Vice President for Media and Events, I can tell you from years of experience that it is always top of mind for the E3 team. This event was a success when it comes to security. There were more than 68,000 people in the convention center and minimal issues. This was due entirely to outstanding fans, well-trained guards and personnel, and excellent communication with our members and exhibitors.

There are some public elements we undertook, including:

– We provided updates before E3 to our member and exhibitors about the extensive security policies and protocols we put into place to help ensure safety;

– Our policies and procedures were developed not just with our 24 years of experience running E3, but also based on expert feedback and direction from security experts–both on our team and externally who reviewed and advised us on our plans;

– We partner with IRL, which runs multiple events, including Anime at the convention center, and they cumulatively have hundreds of years of experience in providing top management and experience in this area;

– ESA undertook very visible measures, including uniformed personnel from LAPD in both halls, as well as our own E3 security team;

There were numerous other steps taken to help ensure attendee and exhibitor safety that we do not disclose publically.

Right now though, we’re in the process of hearing from our members and exhibitors to make enhancements for next year. It’s too soon to go into what those could be at this point.”

I began to try to figure out a solution where fans, press, investors, and industry could coexist. It wasn’t too hard to walk onto the show floor without proper identification. Once, I put my badge in my backpack and walked right into West Hall on accident before getting to my appointment and getting puzzled looks from the PR rep I tried to check in with. Then, of course, there are these guys. 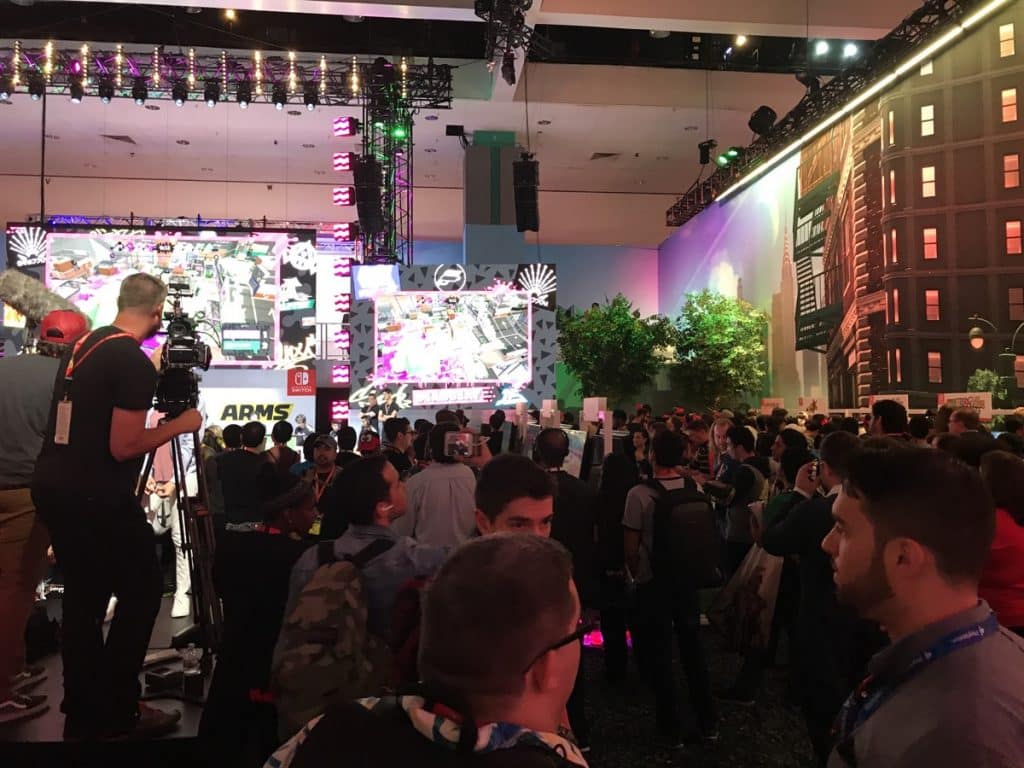 The best solution I could think of is to inflate E3 itself. If the ESA moved to four or five days instead of three in the middle of the week, it could benefit from more passes sold but be more appealing to companies trying to promote their products as well. If the first two or three days were industry only, it would give time for information to be shared and build excitement for the last few days where fans could get in and have a blast as well.

The floors were plagued with long lines that sometimes ran into each other as well. It seemed like in some cases exhibitors had to get someone with a sigh to mark the line or to tell people that it was closed. With a more organized show, this helps attendee and exhibitor. On top of either beefing up security or training them better and including maybe at least one medical team visibly on hand, I think the ESA could take a lot of this year and turn it into a solid learning experience.

I was happy to go home after the end of day three, but I did enjoy the experiences at the show as well. I’m glad I got to share it with so many people and I look forward to future years and seeing how the show changes from here on out.