Regulations from the EU are causing some major sites to be blocked from European readers. Some of the most popular websites in the United States are now going dark in Europe thanks to the new GDPR rules for data protection. Among the sites now cut off from European users are The Los Angeles Times and Chicago Tribune, according to CNET.

As the report explains,

Sites that fall under the umbrellas of media publishing groups such as Tronc ( which contains the LA Times, New York Daily News, Chicago Tribune, Baltimore Sun and many others) and Lee Enterprises (which owns 46 locally focused daily newspapers in 21 states) are all blocked.

Not every U.S. site is blocked, however. Time, HuffPost, and The Washington Post are allowing European visitor through their doors, as long as they give consent for using their data. USA Today, meanwhile, isn’t collecting data as part of the “European Union Experience.”

So far, The New York Times, CNN and the New York Post are unaffected.

This is it.
Today, our EU #DataProtection rules enter into application, putting the Europeans back in control of their data.
Europe asserts its digital sovereignty and gets ready for the digital age.
Read our statement → https://t.co/P19IRPWfqv #GDPR pic.twitter.com/hwCKSj2TjE

Under the GDPR, EU citizens are being given greater control over how their information is used online. The rules were adopted in April 2016 and after a two-year transitional period, have become law as of today, the 25th.

According to the foundations of the GDPR, the regulation reinforces the rights of individuals and makes companies responsible for the personal data they process. In this case, “individuals” refers not only to customers but also to suppliers and employees. 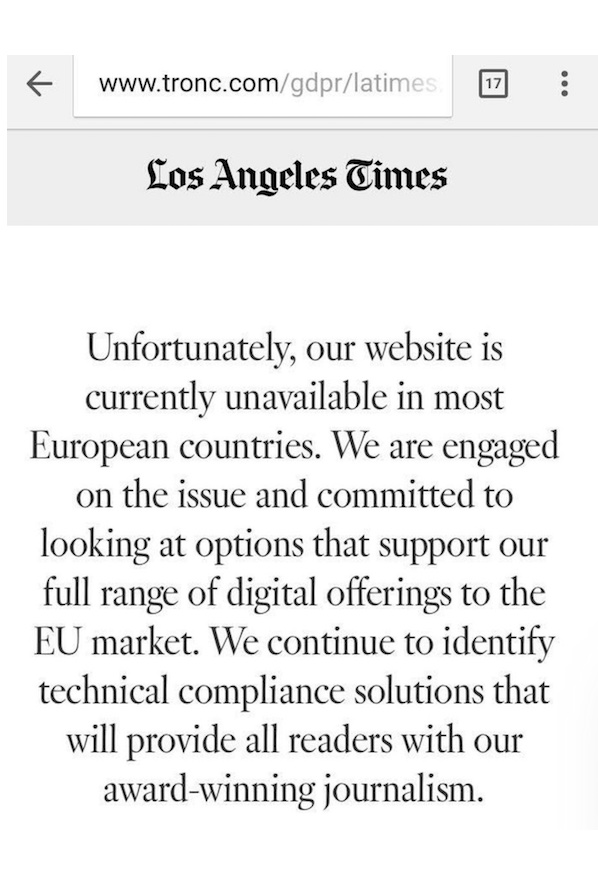 The GDPR rules apply to all organizations that hold personal data of EU citizens, where “personal data” refers to any information relating to a person or “data subject” that can be used directly or indirectly to identify a person. Failure to comply may result in fines.

See also: EU’s GDPR will impact companies inside and outside the Union.

Should U.S. websites block visitors from Europe because of GDPR rules? Let us know your thoughts below.