Every see a robot play a violin? If you haven’t, Ro-Bow, the robot violinist will show you how it’s done. 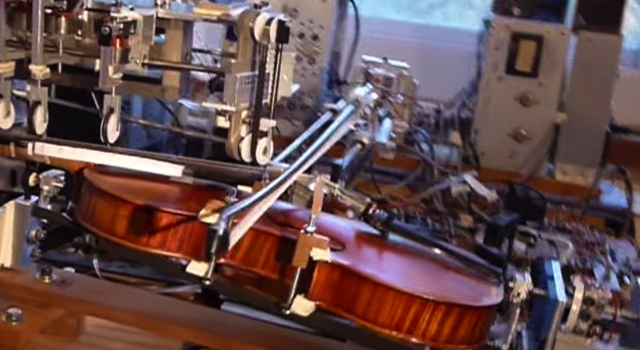 Learning how to play the violin these days are for suckers. Why go through the time-consuming process of having to practice when you can just spend a year or two building a complex robot and computer program that has the ability to play the violin. I mean, c’mon, it’s the 21st century folks.

Well, one guy took the time to do just that. Seth Goldstein, a retired biomedical engineer created Ro-Bow, a violin-playing robot that can probably play with the best of them.

The bow violin and the mechanical fingers are moved by electromagnetic actuators controlled by a complex computer program, as Goldstein describes in the video above. The input to this program is MIDI music files which Goldstein generates by playing on an electronic keyboard. The program takes the note data, converts it into voltages that control the actuators, making the violin play whatever notes he has played. Again, nothing something you could accomplish on a lazy Saturday afternoon.

Apparently, this isn’t Goldstein’s first venture in creating these robotic art projects. For example, in 2008 he unveiled a robo-machine that specializes in only tying knots. That’s it. However, that didn’t stop The New York Times from publishing an amazing profile on Goldstein and his latest creation, Ro-Bow. Check it out, it’s a pretty interesting read. Who knows, it may even inspire you to create one of your own kinetic sculpture.