If you’ve never been a fan of WIndow’s, be prepared, Microsoft has some big plans. [intro]New Windows 10 feature called Continuum, along with universal apps, could spell the end of the laptop (and even desktop).[/intro]

[dropcap]M[/dropcap]icrosoft’s latest OS, Windows 10, has been receiving positive reviews since it was released — somewhat quietly — in July. Everything from Windows 10’s new look to its platform-agnostic design is proof that Microsoft is still serious about maintaining the edge on the PC market, despite its earlier failures with Windows 8, which was universally panned.

The company’s unprecedented move to give away free Windows 10 upgrades highlights not only the company’s desire to push user adoption, but is also a clear attempt to lure more developers to build the so-called universal apps.

These apps — which would run on any device running Windows 10— along with the new Windows 10 “Continuum” feature, are certainly a game changer for the tech giant as it still tries to gain momentum in the mobile market. The newly unveiled Lumia 950 phone—which will run on the mobile version of Windows 10—has even been dubbed by some as the “iPhone killer.” While it’s true that the Lumia 950 has features that iPhones (or Android phones, for that matter) don’t have, Continuum is not as much an iPhone killer as it is a PC killer.

What Makes Continuum a Game Changer

Given Microsoft’s poor track record in the mobile sphere, some may be skeptical about its new strides to get a foothold in this space. After all, just days before the Windows 10 release, the company wrote off $7.2 billion related to its Nokia acquisition. About 7,800 jobs, primarily in the mobile business, were a casualty of the ill-fated deal.

And the Windows platform is still barely making a dent in the global mobile market. Apple and Android are maintaining their stronghold — combined, they comprised nearly 97 percent of worldwide smartphone sales, according to research company International Data Corp. Windows phones, on the other hand, have seen a slight decline in sales since 2012, down to only 2.6 percent in second quarter of 2015.

This uphill battle notwithstanding, Continuum shows a great deal of promise that could change Microsoft’s position in the mobile ecosystem.

In Microsoft’s own words, Lumia 950 is “the phone that works like your PC.” With the help of a dock, the phone can connect to a keyboard/mouse and a monitor — turning into a full-fledged PC. Essentially, users get the full Windows 10 experience, sans an actual computer.

Continuum will allow Microsoft apps like PowerPoint and Outlook to scale seamlessly on the external monitor. At the same time, users will be able to continue making calls and texting without interruptions.

With this kind of PC-like experience — assuming Continuum is successful — users may be asking themselves: Why would own a laptop or even desktop when the phone can do the job?

Microsoft’s game plan is apparently designed to convert consumers who use Windows-powered computers into Windows mobile users. But Continuum’s appeal to the B2B market could also be strong, considering the growing interest in detachable devices (or “2-in-1s”).

One concern that could impact B2B adoption of Continuum is security. Despite robust security features of the cloud-based Office 365 apps, many enterprises remain hesitant to adopt Office 365 — especially if employees opt to access it with their continuum powered mobile devices.

The growth of Windows 10 mobile is currently limited since it will only run on a handful of smartphones. This, however, could change. Microsoft’s commercial for Continuum doesn’t even mention Lumia 950 specifically — indicating that plans may be in the works for other smartphones to feature Continuum.

With the universal apps, Microsoft is banking on consumers’ growing demand for a seamless experience across multiple devices. But the concept is even a bigger boon for developers, eliminating the headaches — and costs — of tweaking each app for every type of device. 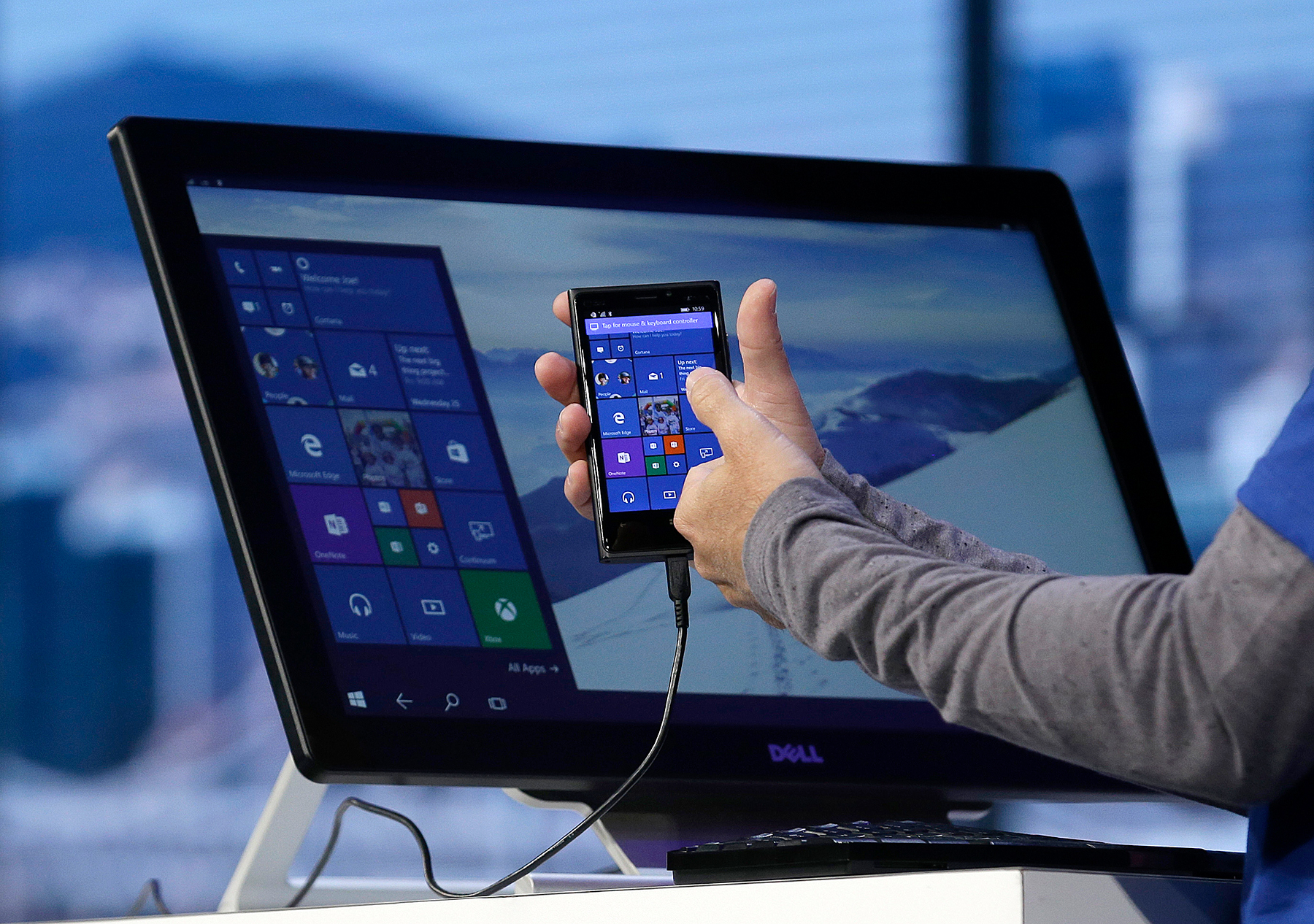 Although Microsoft toyed with the idea of universal apps in the Windows Phone 8.1, with Windows 10, it introduced the Universal Windows Platform. And with it, the lure of a “unified distribution channel” for developers via the Windows Store, regardless of the type of device a user is shopping for. This potential to reach a broader customer market, along with the increased ROI, is certainly something many developers won’t easily dismiss.

If Continuum catches on, the real losers will be PC manufacturers like Dell, HP, etc., because they use Microsoft OS bundling as a major selling point. And already, PC sales have been falling — and expected to be further negatively impacted by the free Windows 10 upgrade.

Microsoft, of course, would be the winner. Should its strategy prove successful, the tech giant could finally gain a greater stronghold in the mobile ecosystem.

The company’s certainly not modest in its outlook — expecting a billion active Windows 10 users across all its devices within the next three years. To put that in perspective: Apple has sold around 700 million iPhones since their launch eight years ago.

If Microsoft’s anticipation of a healthy Windows 10 market comes to fruition, app developers will clearly flock to the universal app concept. Will consumers follow suit?