Postmates, a San Francisco-based company that specialized in on-demand delivery through a smartphone app, debuts today in Boston and Cambridge. 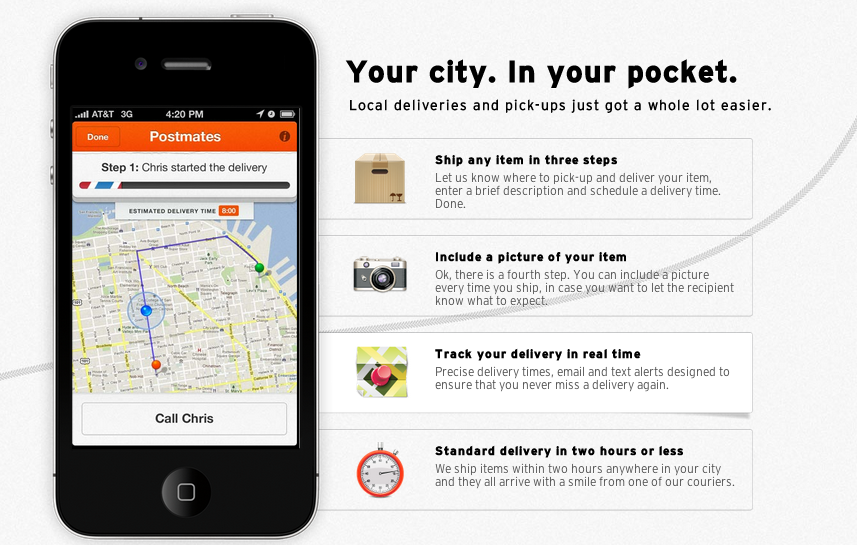 If you’re living or working in Boston and you’re pressed for time (or just really lazy), you’re in luck.

Postmates, a San Francisco-based company that specialized in on-demand delivery through a smartphone app, debuts today in Boston and Cambridge.

The app, which is available for iOS and Android, gives users the ability to browse its inventory of thousands of stores and restaurants in the city, and have items delivered to their doorstep.

Think of it as an Uber for “stuff”

The premise is simple: You add items to your list, and a “postmate” (either a bike messenger or driver) delivers the goods to you. The app allows you to track the item’s progress on a map.

So what’s unique about it? Postmates one-ups other delivery services by “offering delivery from any restaurant or store— including things like takeout, beer/wine, prescriptions, groceries, diapers, dry cleaning, electronics, cosmetics, etc. — delivered 24/7.”

For now, Postmates will only cover Downtown, Back Bay, North End, South End, and South Boston, according to a press release. “Cambridge is also part of the delivery area, a company spokeswoman said. Postmates said it will begin expanding to other Boston areas shortly after the launch,” according to the Boston Business Journal.

Give it a try!

Postmates isn’t messing around when it comes to this launch. To entice you to download the Postmates app, the company is giving away free lobster rolls today (Wednesday) from Yankee Lobster Co. (supplies are limited).

Will you give Postmates a try?