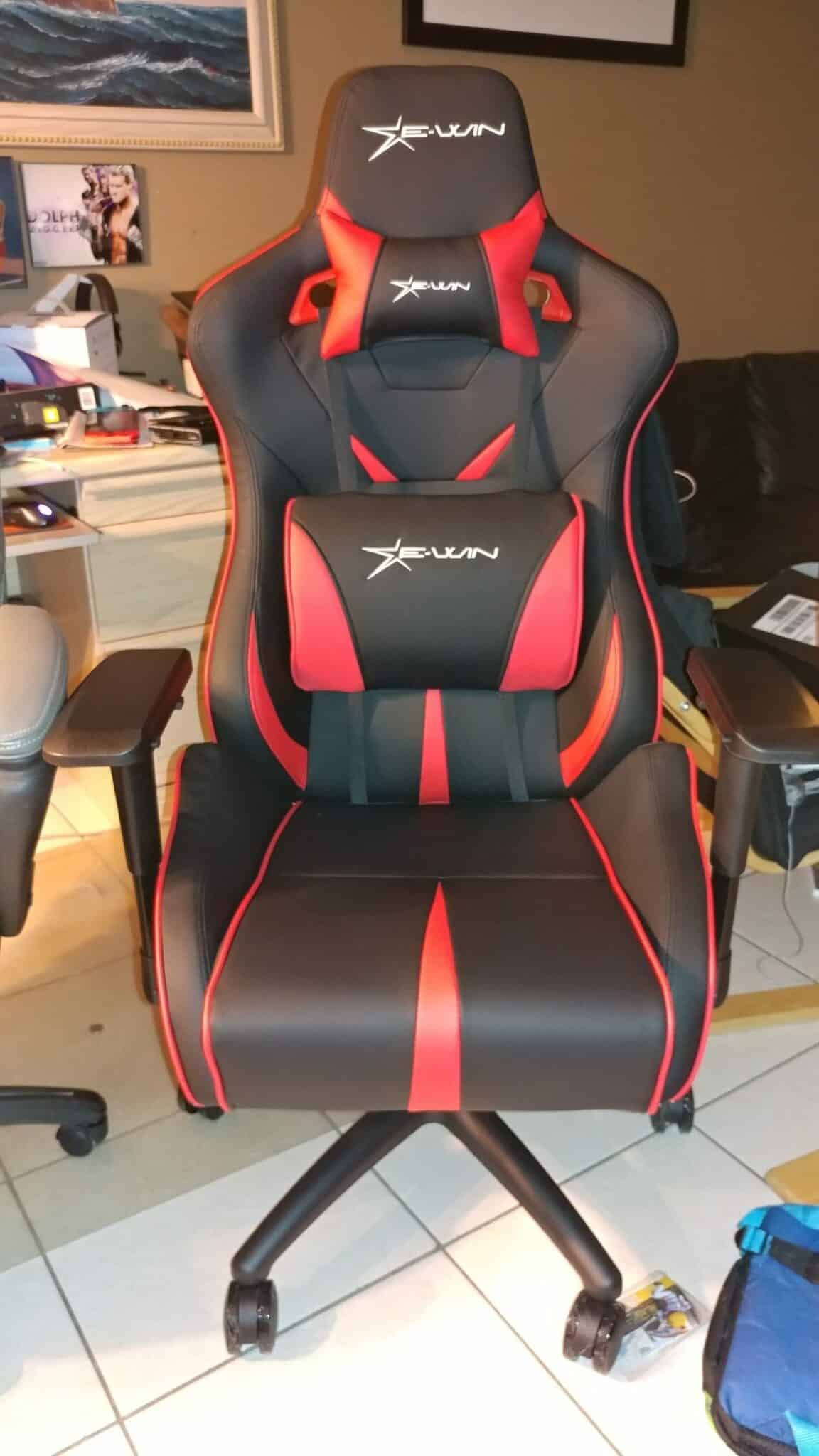 Before E3, I had the opportunity to meet the Ewin team and talk a little about their chairs. During that period, they asked that we ran an ad on the site and we could review a chair. E3 actually overlapped the time in which we were discussing this, so things got all pushed around and we ended up eventually getting our hands on the EwinRacing gaming chair. We had heard some good things about the chair company from peers and readers, so we were glad to take a look at their product.

Fast-forward to two months later and you may be asking yourself what took so long to get this put together. Well, things have been busy for us here, but also, this chair took some time to adapt to. I’ll get to that in a sec, but let me tell you that Fed Ex drivers really seem to hate delivering 50+ pound boxes to my home. The Ewin Flash came in a nice big box and was packaged well enough that even though there was some wear to the box, the chair arrived in flawless condition. 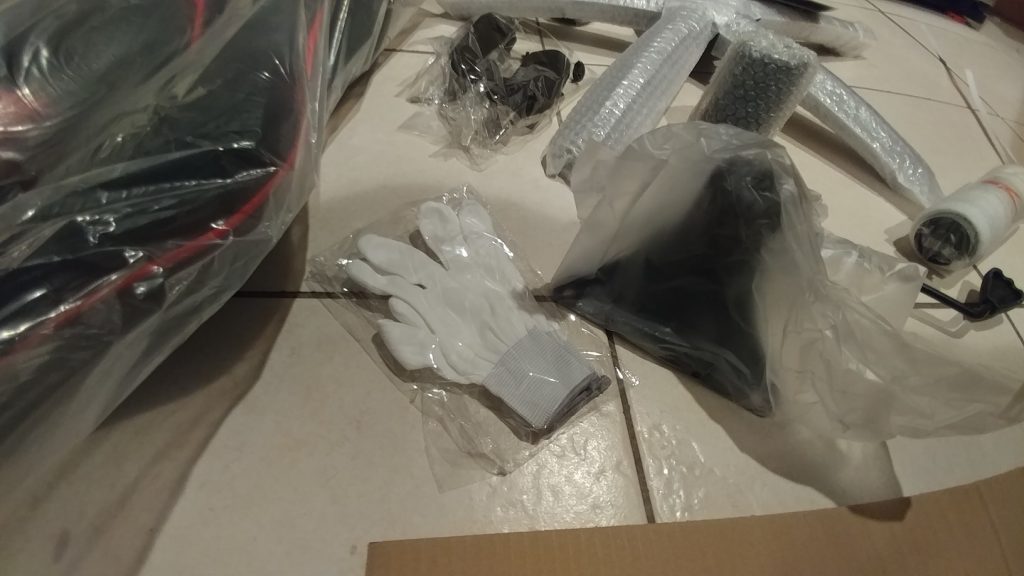 When it came to assembly, Ewin really proved that they hoped their product looked pristine upon completion. Of the chairs we’ve assembled for review, the Ewin Flash was the only that came with gloves to keep my grimy fingerprints off of the pleather and metal components. I was impressed that they seemed to care enough to keep their product looking showroom new. Ultimately, the entire assembly took about 30 minutes, and came with full-color instructions that were fantastic, as well as few components of the chair were pre-assembled for easier assembly. This was easily the most worry-free assembly we’ve had so far.

Upon completing assembly, it came time to test the chair out. Over the next four weeks, we tried a series of different tests. Standard wear was expected during these tests, but I did notice a few oddities while trying things in the chair. The back of the chair reclines 180 degrees, allowing someone to lay down if they would like. At the same time, the reclining aspect of the chair seems incredibly stiff. I wasn’t able to ever lounge in the chair without considerable effort. At 6’1″ 240 lbs, this is really the first time I can say that I encountered something like this. However, the chair was meant for gaming, perhaps this was done on purpose to help keep your posture decent? 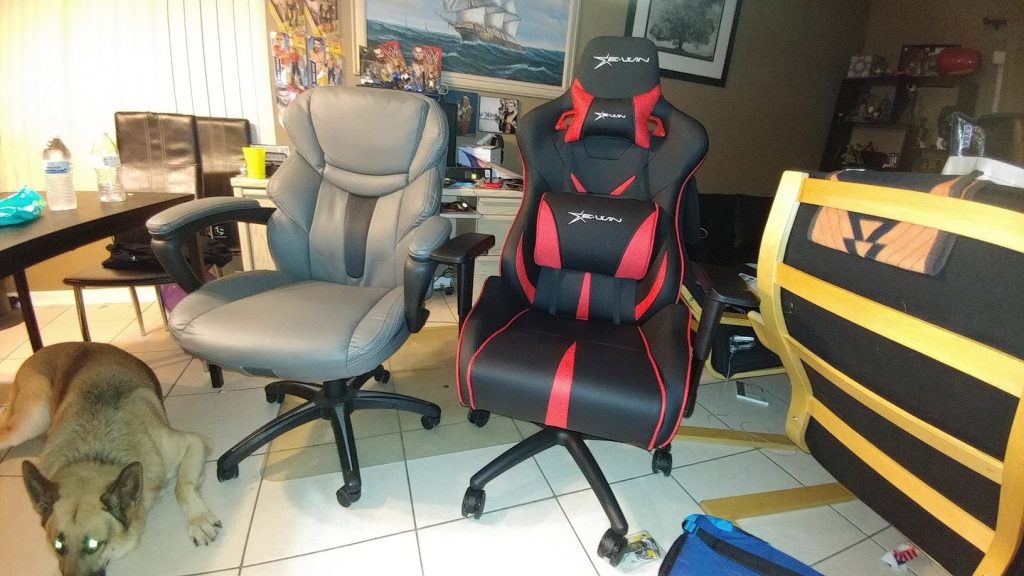 As far as the chair itself, it started out incredibly stiff. It was apparent that after a little use, the cushions were loosening up and the arm rests were as well. Actually, the arm rests were so stiff initially I thought they were hard plastic, which seemed like a questionable design choice. Then, I noticed that they were a rubber material as well, they just needed to be worked in a bit. The overall design is quite similar to others on the internet. The flash seemed to be a bit broader that some of the more generic brands and the head pillow and lumbar pillow offered some comfort when sitting appropriately with good posture.

Eventually, the chair began to soften up a bit, it was still very firm but it certainly became more comfortable. Around the same time, I noticed that one of the wheels began to catch when I scooted the chair forward. It was odd but after messing with the center of gravity in the chair by changing the back angle and moving the lumbar pillow, it seemed to become less frequent. It was at this time that we originally began to produce the video-review for the chair. 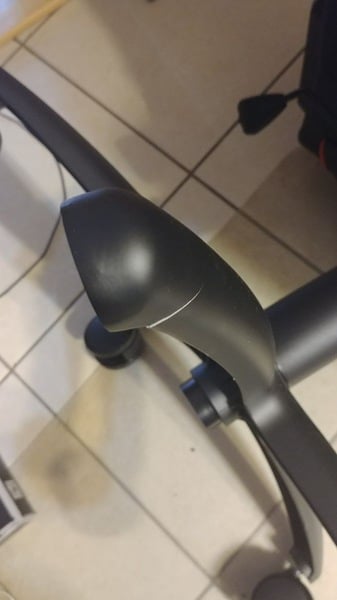 The day before I sat down to write the review initially, I plopped down in the chair and heard a loud pop. The chair immediately dumped me forward and I almost went face-first into my desk. Initially thinking that the lift or chair base had somehow bent, I instantly began to check the bottom of the chair. There was no damage there, so I thought that the wheel that had been catching may have broke. Checking the wheels, there was no issue there either. At this time I noticed the five-star base itself had snapped at the end of a point. This is a metal base and my weight limit was below the threshold. I was absolutely livid.

I reached out to Ewin to tell them about the issue. They asked to see the damage, which I included, and to their credit they immediately sent a new base out. The base was kind of a pain to replace, since my rubber mallet wouldn’t work and a metal hammer was required. Putting the new one on was easy though, and there hasn’t been any issues since. It’s possible that there was simply a fault in the base, because I found out that the reason the wheel had been catching was due to some warping on that point of the base. 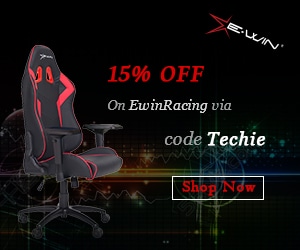 Ultimately, I have this to say about the Ewin Flash gaming chair: at the initial price point of $379, the quality is higher than most brands at the same price point. The chair itself is well constructed and doesn’t feel like some sort of discount knockoff. The lumbar pillow does have the elastic bands running up the chair but I can’t say they ever bothered me. With only one serious complaint, I can honestly say that if you were looking at a chair and weren’t up for spending $500-$700 on a real nice one, this is an absolutely passable option. As long as the base holds up.

Review: EwinRacing Flash Gaming Chair – breaking budgets
Decent, but not top tier
The Ewin Flash gaming chair is comfortable after being broken in. Unfortunately, the base broke after a month of use and I haven't been able to completely trust it ever since. While it is cpmfortable and support has been nothing short of amazing, I'd say the issue with the base keeps me from giving this a higher score.
The Good
Once broken in, it was very comfortable. I could probably sleep in it.
Materials feel like they are high quality and assembly was ridiculously easy
The Bad
The base broke. See the pic above. That's no bueno
The chair doesn't like to recline without a lot of effort
7.5
Overall
Related TopicsChairTechiegaminggaming chair