We got our hands on a shock resistant and waterproof Bluetooth speaker from Ivation. We gave this thing a beating and it survived. 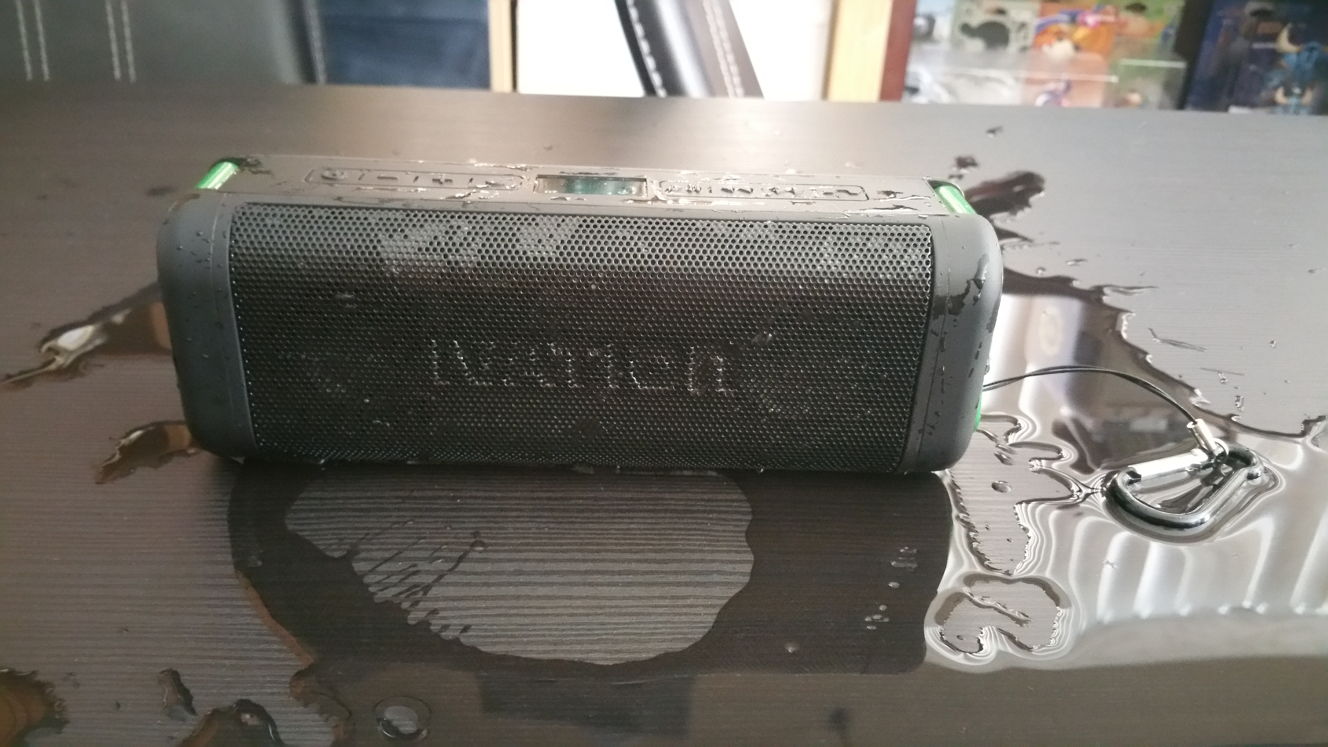 Ivation sent us this speaker to take for a spin. It’s pretty neat but the pricing seems off in comparison to all the other more well-known brands. Being that I have a nice Logitech UE Boom speaker, I figured that we’d put Ivation’s speaker to the test, although I wasn’t really expecting all that much out of it.

First thing’s first, on top of being a Bluetooth speaker, Ivation also included a FM radio inside of the rectangle box. This is actually neat because the speaker has the ability to function without actually having a smartphone hooked up to it.

As it’s advertised as a waterproof speaker, the connection ports have rubber seals around them, and there are several ways to hang or clip the speaker to things thanks to the carabiner clip that comes with the speaker. It doesn’t have any speakers on the rear of the casing, so you can’t expect to get 360 audio out of it or anything like that. 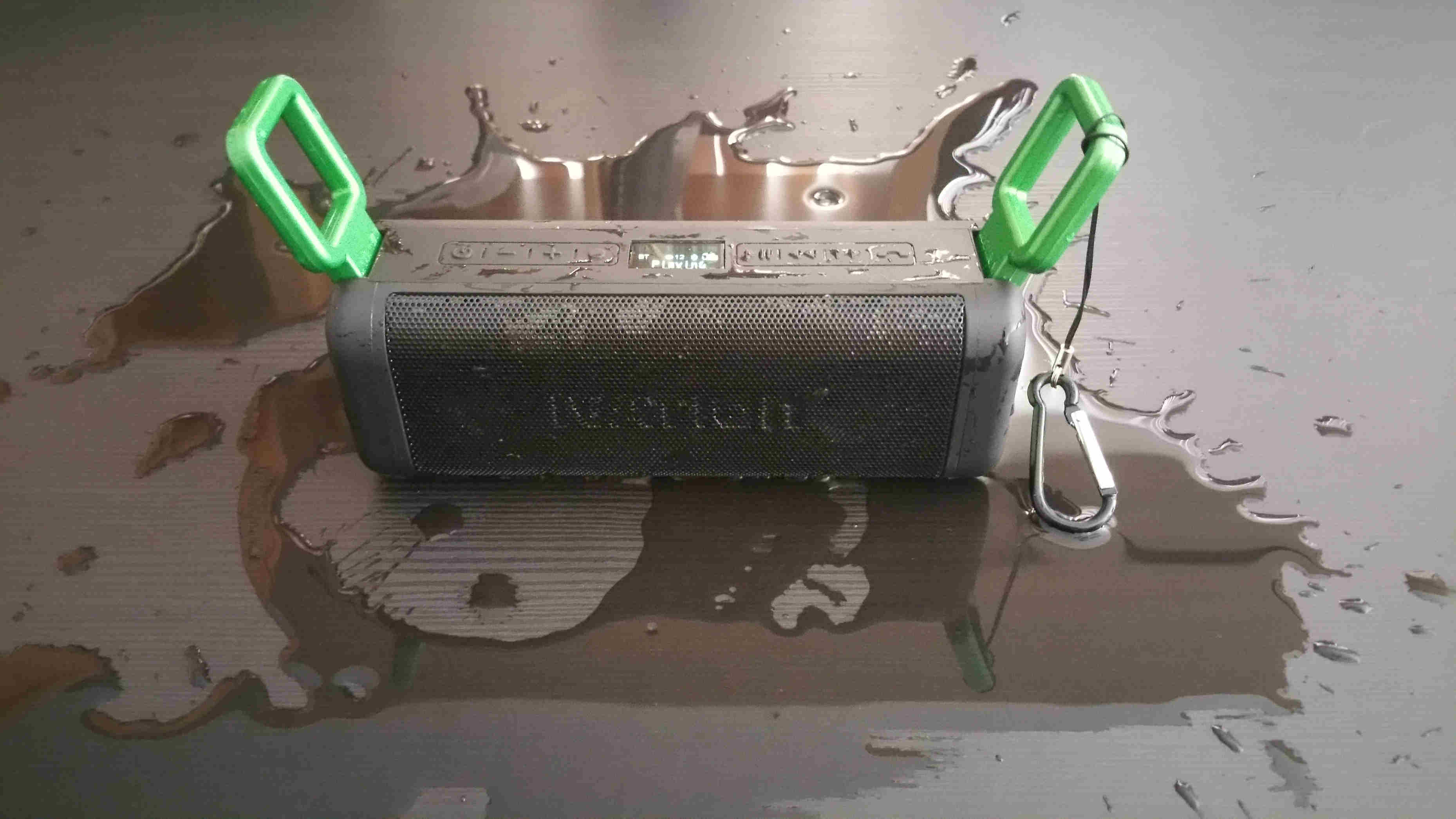 The speaker also has a ton of bass. When I say a ton, I mean an alarmingly large amount of bass. I almost dropped the speaker once when trying to find a FM station just because the bass hit so hard that it startled me.

Music itself sounds very clear and even radio stations come through awesomely due to the digital tuner. Calls also sound great on the speaker, but the internal microphone isn’t something you’ll want to rely on as every time I used it, the callers said I sounded distant. Nevertheless, it’s a handy feature to have without a doubt.

The battery is certainly impressive and only required one charge in the time I tested it. Being that I used it in the office for a constant week,  at least once a day, I am thoroughly surprised that it offered better battery life that some of the expensive competitors.

When going head to head with my Logitech UE Boom, this speaker actually did a great job of standing on its own. In fact, the only drawback I had was when I walked around the room I had the speaker in, as it was very noticeable that the speakers were pointing in a singular direction. Even then, the music was loud enough that you could still enjoy it, but it did sound muffled. I can’t hold that against it all that much, as that is a feature that my $199.99 speaker heavily advertises.

They advertised this as a shockproof and waterproof speaker, something that has become a gimmick to many companies as there are varying levels of waterproofing these days. I decided that we were going to give this speaker a trial by fire and put it to the test.

As you see, being under water, the speaker still functioned. After being fully submerged, the speaker’s audio quality was limited for about a minute but continued to function without a hitch. There was only one slight hiccup when it was underwater and the Bluetooth connection failed for half a second. I’d say it passed this test.

Next we went and tested the shockproof features of the speaker by throwing this bad boy in the air about 40 feet or so and seeing what happened. Unfortunately, this happened:

After climbing on my roof to retrieve my speaker. There was only light abrasive damage to the grill and some of the soft rubber. Nothing was effected by this and it was all cosmetic. Once again, I would consider that a pass in my book.

I didn’t expect it to be, but the Ivation Bluetooth speaker won me over by doing everything as advertised while taking plenty of abuse. I’d absolutely recommend this for anyone that works outside or it you just wanted a speaker you could beat to hell and not have to worry about.

Reader Rating0 Votes
0
The Good
It's as rugged as advertised
Crazy good battery life
FM Radio
The Bad
Phone calls don't work great on this, despite it being an advertised feature
The directional speakers create an optimum area of audio which can limit quality in a large area
9.4
Overall
Buy Now
Amazon
Related TopicsAudioBluetoothBluetooth Speakerreview