These days, alarm clocks are pretty boring. Thankfully, Mesqool is here to save the day with its alarm clock that displays the time via a laser. 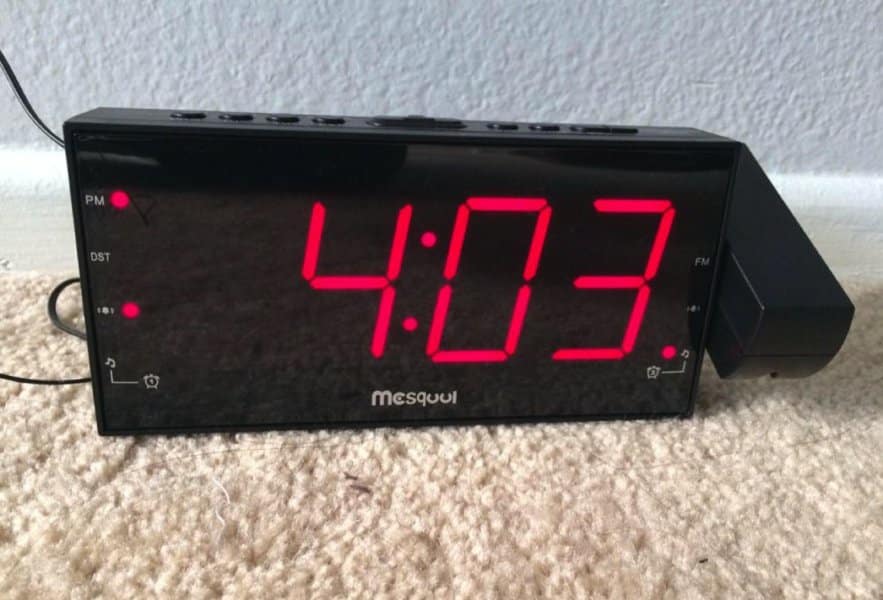 Mesqool is an electronics manufacturer no stranger to unique, but overall useful electronics. Their video cameras are reviewed quite highly on Amazon, for example. The company has now created a dual alarm clock with AM/FM radio. It may sound like just another “been there, done that” type of product. However, as they say in early-morning infomercials, “But wait, there’s more!”

The alarm clock from Mesqool has two features not seen on any dollar store alarm clock. While the price may come off as a bit too high, the rest of the product has enough to make it worth the money.


When a buyer opens the box, the alarm clock won’t look too different from another one they have seen. It has a variety of buttons to toggle the radio and set the time. For alarm sounds, users can either have the grating “BEEP BEEP” or use the radio. It appears to be a generic alarm clock radio. Nothing terrible about it, though.

It is the alarm clock’s ability to be a battery backup for other electronics, which sets it apart from the pack. Mesqool’s alarm clock can be powered by two AAA batteries. It is a basic 5V 1A output, which is adequate for many small electronics. It may not be ideal for big-sized smartphones, such as the Samsung Galaxy Note series, though.

It’s projection feature is the other big selling point. The projecting feature gives off a “Yankee Swap gift” vibe, which is in no way a bad thing. The clock has the ability to project the time onto a flat surface. It can be adjusted for size and clarity as well. It’s actually neat to look at and works quite well.

These two aspects of the alarm clock make for a great device during a power outage.

Price is a bit steep

As of March 20th, the price for Mesqool’s alarm is $30 and it’s the sale price. A bit high for something that may come off as a bit gimmicky in certain customer’s eyes.

For other customers, the price may not be terrible. Keep it as a great emergency device and something to show off once in a while.

Reader Rating0 Votes
0
The Good
Fantastic for power outages/weather-related accidents
Projection feature is a lot cooler than it sounds
Overall gets the job done as an alarm clock
The Bad
Steep price
Generic looking
No option to use a phone's music settings.
8.9
Overall
Buy Now
Amazon
Related TopicsClockgadgetreview