The ultimate Xbox One controller for FPS games 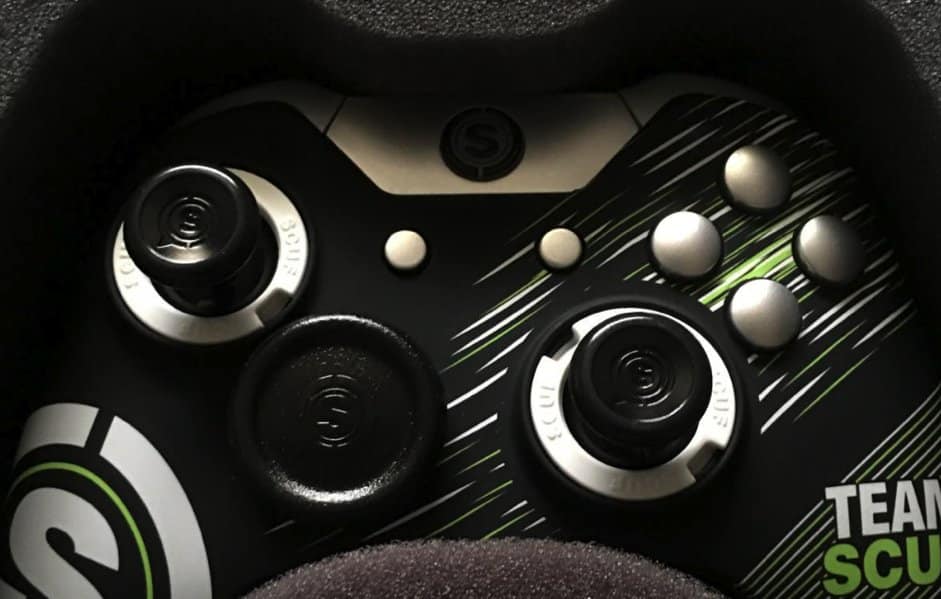 Despite a majority of gamers perfectly fine with the default Xbox One controller that comes with their system, some players out there crave for a controller that is more comfortable, fully customizable, or something that provides them with an extra edge on their competition.

In addition to everything included in the standard version of the controller, several additional add-ons you can purchase are the following: 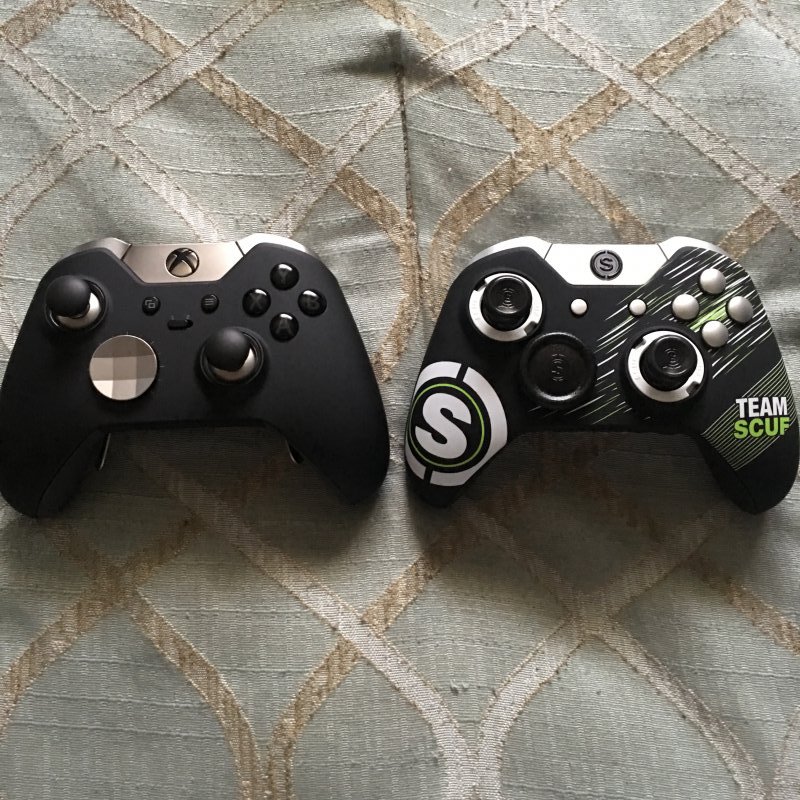 From left to right: Xbox One Elite Controller, SCUF Infinity1

Visually, the SCUF Infinity looks like a Xbox One controller. The first thing I quickly noticed when I opened up the box was the SCUF logo replaced the Xbox logo on the top center of the controller, as well as on top of the thumbsticks. The control disc located where the d-pad can be easily removed.

Looking at the back of the controller, the battery cover is slightly larger than the standard battery pack, which is because the four AXE paddles are attached underneath the cover. The outer two paddles are thicker in width, while the inner paddles are slimmer in size. The Infinity1 also offers a 3.5mm audio jack on the bottom left, while the Micro-USB charging port can be found right above the battery cover. 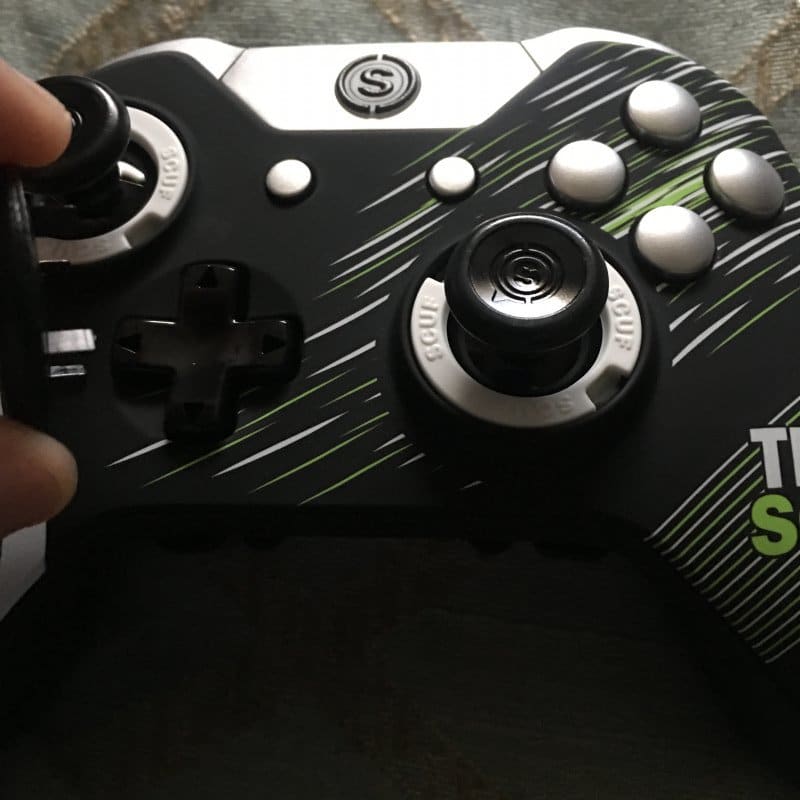 If you want to modify the paddles or the thumbsticks, not a problem the Infinity1’s thumbsticks and paddles are easily detachable. The thumbsticks can be removed by using the ring that comes with the controller, simply unlock it by turning the ring counter-clockwise, then when you’re ready to lock it, turn it clockwise. The back paddles can be easily removed by taking off the battery cover and applying minimal pressure to pop them in and off as you wish. 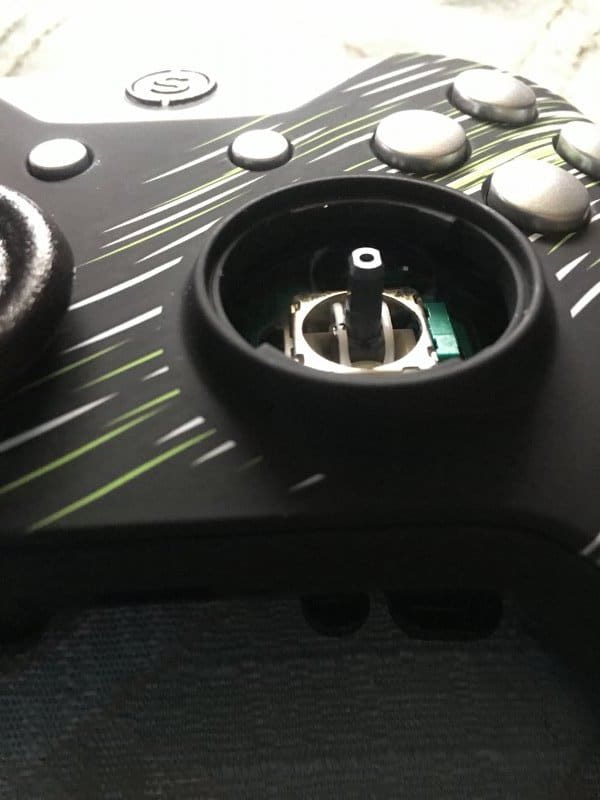 Those who purchased the Electro Magnetic Remapping feature, you will have the ability to remap your paddles. By default from the order of left to right the default macros are A, X, Y and B. However, if you want to remap the buttons, only turn on your Xbox One and controller on and place the EMR Mag Key on the back of the controller with the magnet symbol towards the controller. 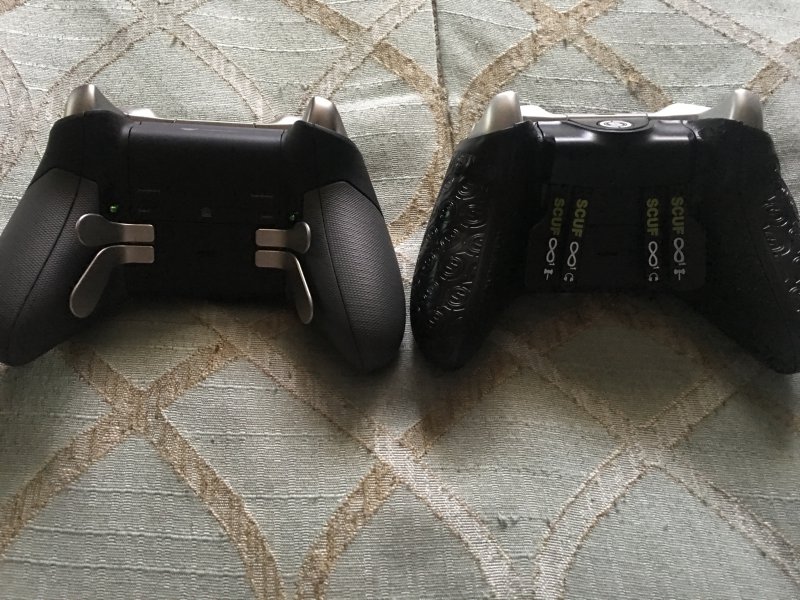 Alongside adjusting the paddles and the thumbsticks, the controller also offers the opportunity to modify the grips. By using the clamp removal tool, players will have the ability to quickly detach the current grips with another grip they would rather use.

Regarding using it during gameplay, the Infinity1’s performance is spectacular. Every function on the controller is precise, and once you find which buttons you want to assign your paddles to, you are guaranteed an advantage against the competition.

Currently, the SCUF Infinity1’s price starts at $119.95, the standard form comes with the controller as well as the four paddles, however, depending on how you customize it, the price will increase. Though it can be a bit of an expensive investment, if you are looking just to purchase the standard controller it is a cheaper option to get compared to the Xbox One Elite controller, which is priced at $149.99.

However, if you are looking to buy this controller with the intention of reviewing it specifically for shooters, then I would highly suggest purchasing the EMR for your paddles. While it will up the cost to $155, you will have the liberty to map the buttons however you’d like. When you factor in that the paddles on the Infinity1 do not take up much backspace like the paddles on the Elite the five extra dollars doesn’t seem like a bad idea.

Overall, I was very pleased with the Infinity1, and I much prefer it over the Xbox One Elite controller. The endless ways to modify the controller, the opportunity to adjust the paddles anyway you’d like, as well as a plethora of colors to choose from, the SCUF Infinity is a fantastic controller that I believe every Xbox One owner who is looking to buy a controller for FPS games should highly consider purchasing.

Disclaimer: KnowTechie was sent a review sample of a customized SCUF XBOX One Infinity controller for the purpose of this review.