The Syllable D900S need a lot of work before they’ll be ready for prime time. 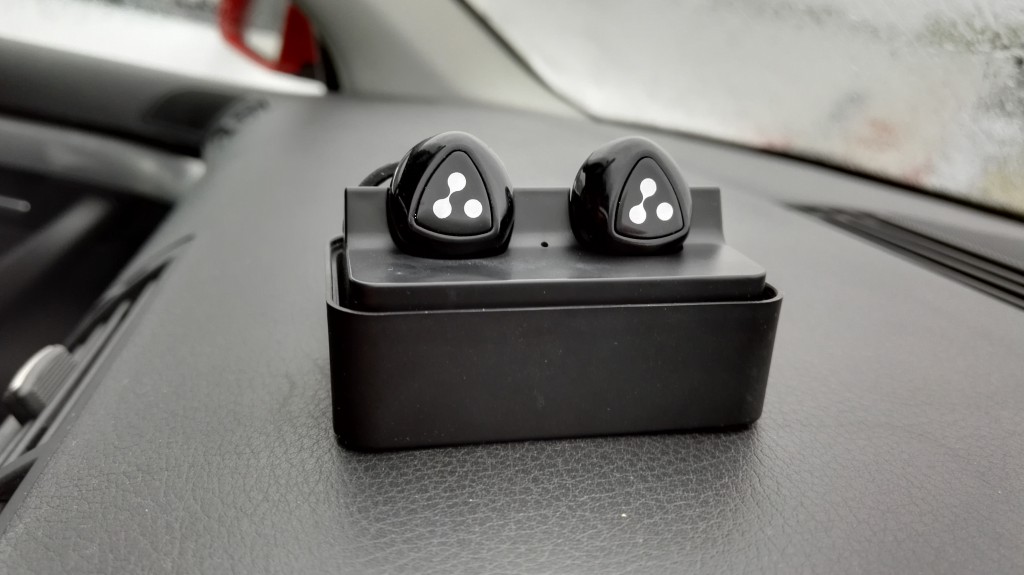 It’s a shame, cause there’s some really great things to like about these Syllable headphones. They look kind of like a pair of dice, and anytime I wore them, I always got questions and compliments. They looked futuristic and they are completely wireless which tripped a lot of my non-techie co-workers out.

If the completely wireless option makes you nervous, they do include a silicone string that will allow you to connect the earbuds together to form a headset.

The carrying case is also a terrific idea, as you can keep them from rattling around in your pocket and the case holds a charge so you can always ensure your earbuds are charged and ready to go. Pressing the power button on the case illuminates a four blue LED light indicator to inform you on how much charge remains. You can charge the case with a basic Micro USB charging cable that comes supplied, but any cable works perfectly fine and it does seem to hold a charge for a good while. I’ve recharged the headphones about 8 times and it’s still got full bars.

Sadly, that’s where everything turns to garbage.

These things are a pain to pair. In order to use these things in Stereo mode, you have to first activate the right earbud and then activate the left one once the right one is connected and then it will split the signal between the two. The problem with this is that the slightest touch or interference will kill your audio. Adjusting one of them in my ears would immediately cut sound to the left side.

Putting my phone in my pocket would make the audio cut in and out, or sometimes just refuse to work at all. If I wanted to listen to music, I had to have my phone in my hand or put them in an armband holster. Talk about annoying.

Honestly, it was easier and more convenient to use wired headphones than it was to use these Syllable headphones.

That’s saying something considering the whole point of these Bluetooth headphones are their wireless functionality and simply put, it barely works. Because of this, I never did actually drain the battery on the headphones because they constantly would drop connection. I might even be willing to forgive the sketchy connection if they had great sound, but they’re tinny as all hell and there’s absolutely no bass.

How do you release headphones that plug into your ear without any sort of Bass capability? Even my garbage Dell Soundbar on my work computer thumps a bit if I play some hip-hop in it. These things made Bassnectar sound like Neil Diamond.

The other reason I never could wear them very long? They continually fell out of my ears. They’re heavy for an earbud meant to be able to stay in your ear. They might do better if they were about half the current weight, but even with the tighter silicone plugs, I had to jam them into my ears and one of them would fall out usually within 10 minutes of walking.

All and all, great ideas, terrible build quality and performance. Syllable should take these back to the lab, half the weight and add some bass. I’m not sure if the pair I got are faulty or what, but surely they can’t all have the same problems with the Bluetooth range or interference. Ah well, hopefully they’ll nail it on the next attempt.