Review: VR Shinecon Headset – Save your money and go with Google Carboard

We put the VR Shinecon headset to test, and unfortunately, we didn’t get the results we were hoping for. 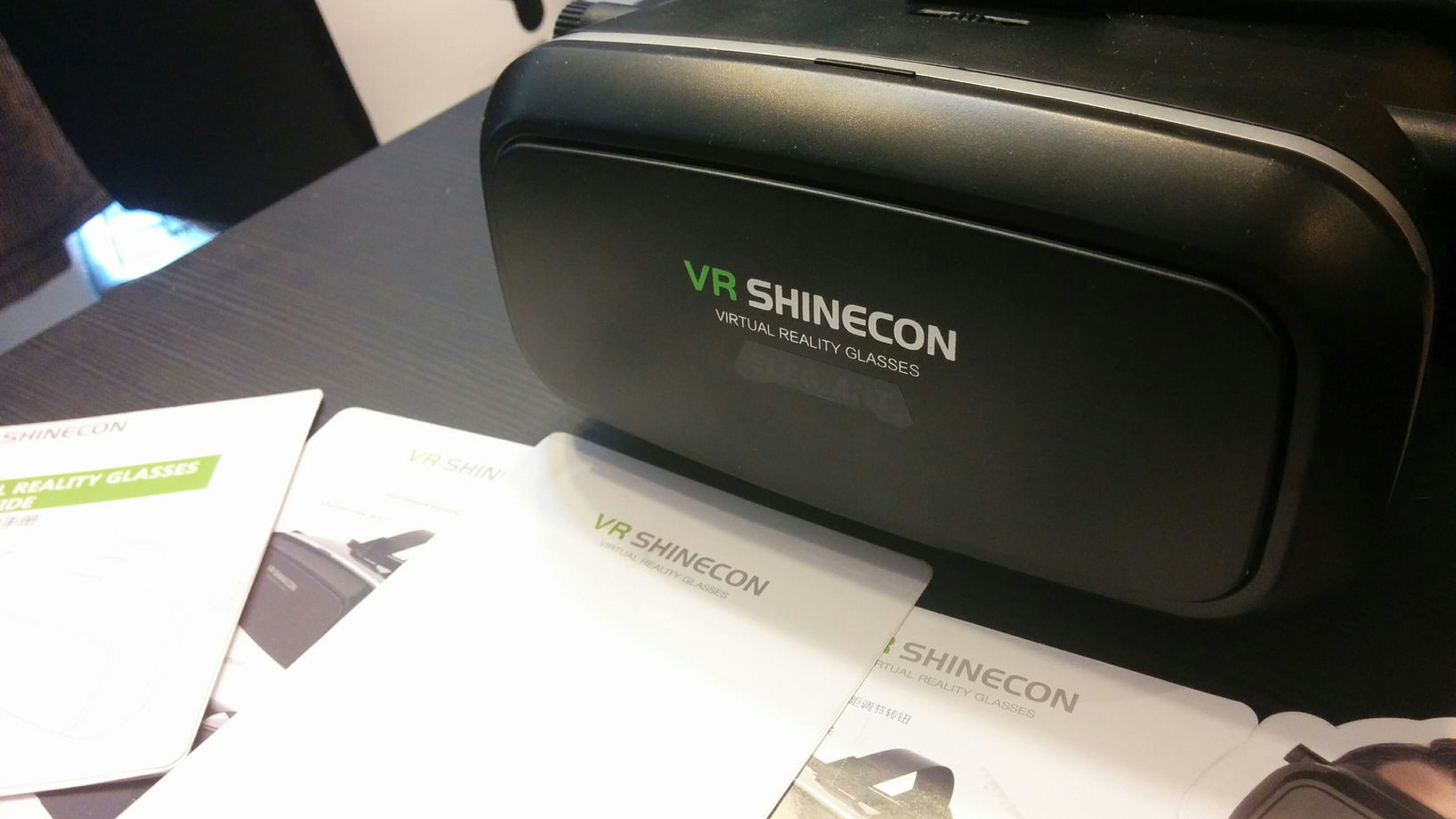 Virtual reality headsets seem to be the new hot tech these days. Most devices, like the Google Cardboard, Samsung Gear VR and others use a mobile phone to create the VR effect. Almost every mainstream device also offers a way to interact with what you are doing on-screen, be it just to center the image or to play a game. We were sent a VR Shinecon headset to see how the secondary market is for these devices,  I think it is time for them to go back to the drawing board.

The VR Shinecon, as a physical device, isn’t a bad product. The actual lens-piece is sturdy and is built to hold almost any current phone on the market. I tried using a Note 4 and a Nexus 5, both worked without any flaw. The visor also has an open port on both sides, so you can actually plug-in a power cord while you are messing around with the VR unit as well. The soft foam padding on makes the headset sit comfortable on the user’s face and the elastic band doesn’t apply much pressure to the head or face. 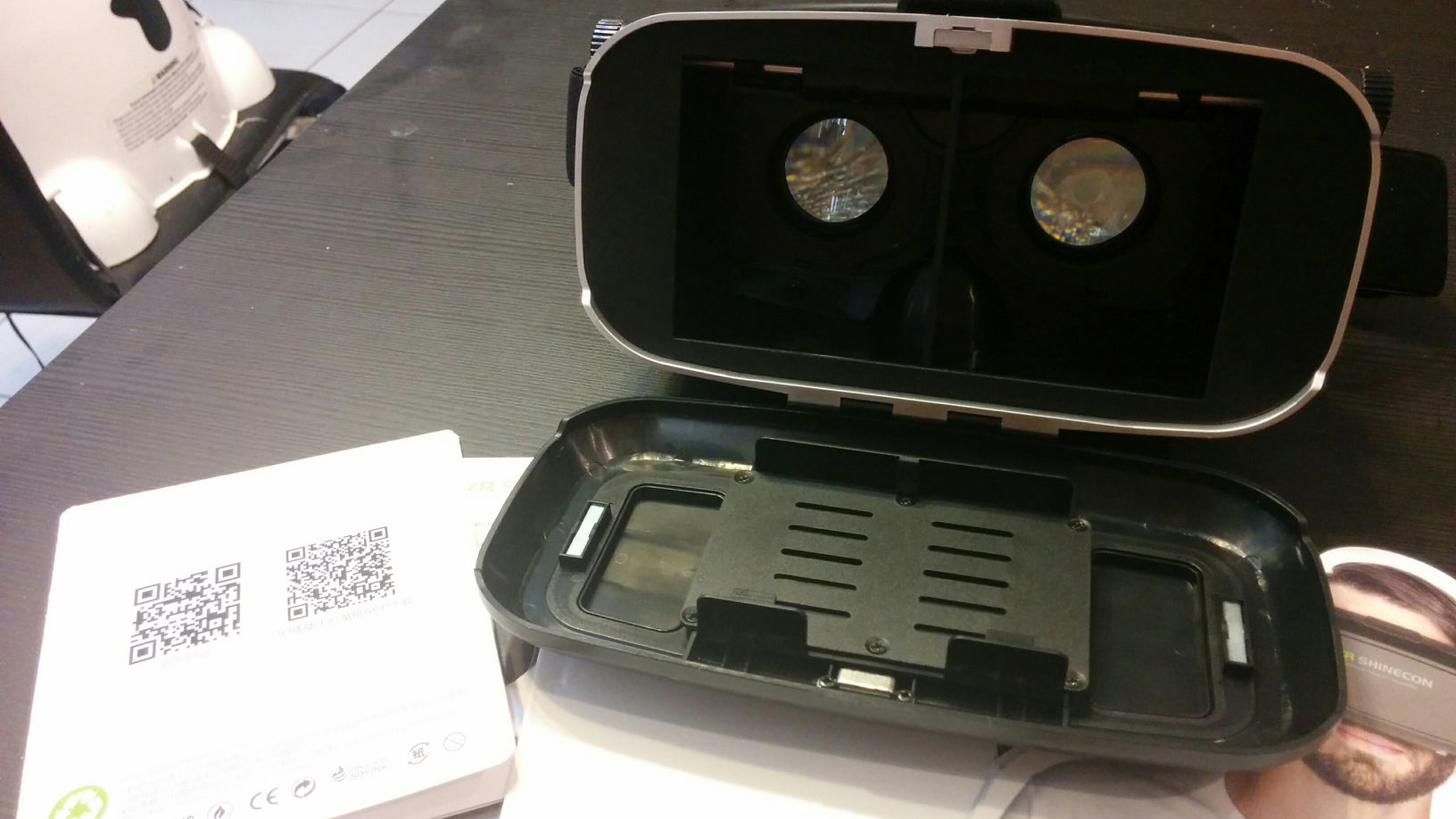 I was absolutely hyped to actually get this device up and running once I installed the right software. This is where the turd started circling the drain, unfortunately. The device came with lots of lovely colorful printed material that was all in Chinese, which wouldn’t have been a major issue, but the software was also in Chinese.

After installing the software, I had no idea what I had just installed, and continued to be oblivious of it until quite a bit of time later. As it would turn out, the software is simply a media player that will display the video in the format for it to give you a VR feel to it.

“I had to wave my head around like I was Ray Charles to even try to find the picture.”

The major issue with the VR Shinecon headset is that it lacks even the most basic ability to use on-screen selection or centering with the device. That means that if you wanted to watch a video on the headset, you would have to try to open the headset (ideally while still wearing it), try to shove your fingers into the device without opening it too far, and finally tap on the display to try to center it as best as possible.

There are some apps that do allow you to select options by centering a cursor on the screen but even that is a pain in the ass when the centering is off. Best case scenario, I ended up having to turn my head slightly to get the full effect. Worst case scenario, I had to wave my head around like I was Ray Charles to even try to find the picture. On the Cardboard, the is a little magnetic button on the top. Easy. 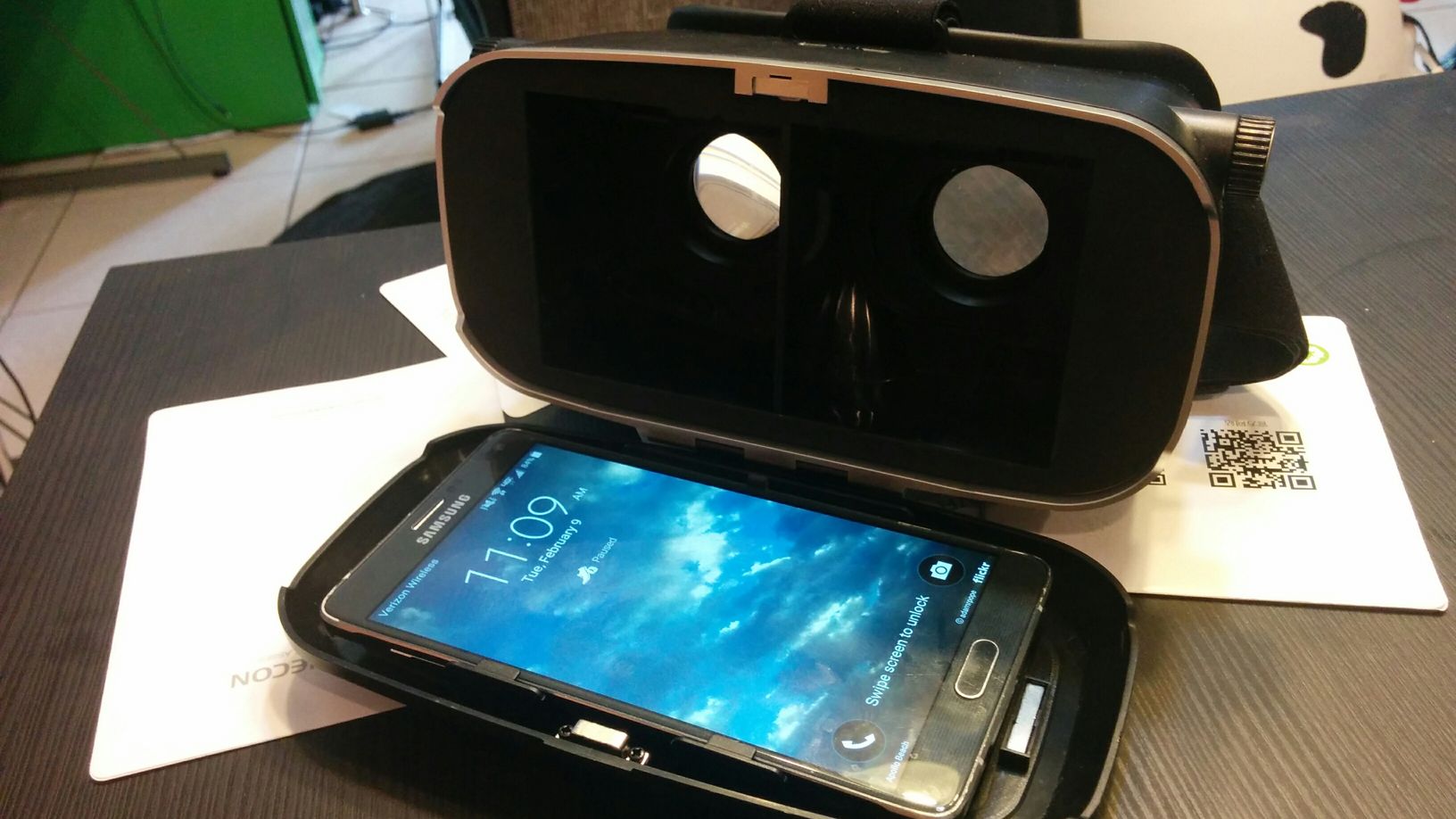 There are suggestions on the Amazon page for the VR Shinecon headset that include buying magnets and sticking them into the device, but I’m not going to mess around with that. It almost seems as if they put all the time and effort into developing a nice headset, only to realize that they forgot to include user controls as well. Then they released the device hoping no one would notice. Well, I did and it is booty. I was also able to use a Bluetooth controller in certain situations, but it wasn’t 100% reliable.

“It almost seems as if they put all the time and effort into developing a nice headset, only to realize that they forgot to include user controls as well.”

As this is a review, I can’t say I recommend the VR Shinecon headset. If you had the tools laying around to get things working correctly, it is a passable device, but this tech is supposed to be entry-level. I don’t think that everyone that would drop $30 on this has a $40 Bluetooth controller hanging out, I wouldn’t expect them to. Do yourself a favor and get yourself a Google Cardboard variant instead, at least they’ve but time into making sure their devices actually work easily.

All in all, if you wanted to watch Youtube videos in a simulated theater environment, I guess this is your thing. If you want to actually use any of the cool VR apps out there that make the tech worthwhile… haha, not so much.

Reader Rating3 Votes
5
The Good
The actual design of the headset is really nice
The depth and width options work well too
The Bad
Too bad it doesn't work well with any good VR software or apps without using a controller or futile attempts at centering the display
The software and instructions all come in Chinese too. We had the English version sent to us, but it recommended downloading other third party apps.
4.5
Overall
Buy Now
Amazon
Related TopicsGadgetsGoogle CardboardVirtual RealityVR