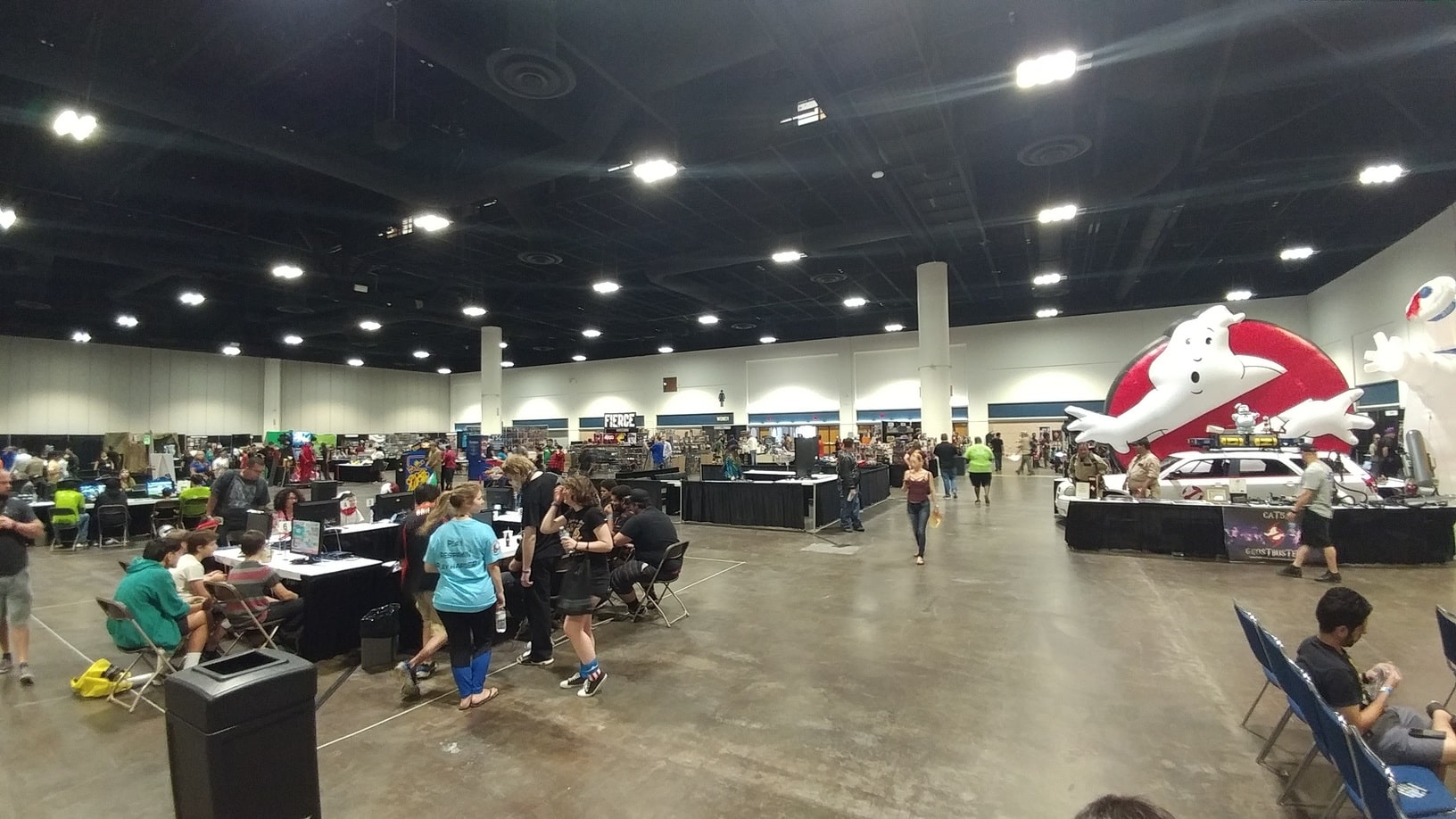 This weekend, I had a chance to take my son to his very first convention. Tampa MaloogaCon was billed as a convention that would feature “Gaming, Cosplay and more” and I figured this would be a good chance for my 9-year old son to see how these things work. I went and bought a pass to the show, since my son got in free, then we took a trip downtown to the Tampa Convention Center.

There’s a lot that needs to be said about MaloogaCon and I only hope the organizers are able to see this at some point, because as an industry veteran and convention-goer, MaloogaCon really lacked an identity.

Getting there was easy.

After stopping at a few of the merch booths and noticing a few oddities, like multiple booths selling the same digital art, my son and I checked out a few of the actual attractions at the convention. We watched some fencing, which I actually regret not doing with my son, where the goal was to pop the balloon on your opponent’s head. After that, we visited a setup with 4 picnic tables that had eight different consoles out for people to play.

My son got a chance to play Dreamcast and Commodore 64, which was a cool experience for him. Then we went to the arcade cabinets, which consisted of a pinball table, a Pac-Man/Galaga cabinet and the old 4-player X-Men Arcade game. My son had a ton of fun playing pinball, as this was really his first time understanding the nuances of it and then we played X-Men for a bit. I expected it to be a bit later in the day but we had only been walking around for under two hours.

Wasn’t this a gaming convention?

I was actually a bit surprised at the lack of actual video games at MaloogaCon. Sure, you had vendors trying to sell you the PlayStation copy of Einhander for $120 or attempting to sell the Nintendo Switch for $400 or more, but there wasn’t anything that stood out for video game entertainment.

I was surprised, I know that we have indie devs in the area and with some people coming to set up booths from further than Orlando, I was shocked that no one attempted to get in on this. Microsoft was there with a Pros vs Joes setup, but the staff seemed more interested in conversing with themselves when we went to visit. I still don’t know completely what was going on there. They had some different games being played on the stage at the back of the convention floor and we stopped to check out some Smash Brothers later in the day. After watching for a bit, my son leaned over and asked if we could switch spots as he actually couldn’t see much of the projector screen from where he was sitting.

At one point, my son found someone’s credit card on the ground, we asked around to see where we could drop it off at but no one really seemed to have a clear idea. We ended up walking out of the show floor and going to the convention center info booth, hoping that the card owner would do the same. On our way in, security stopped us and asked to check to see if we had wrist bands, which was kind of funny since we had been in and out four or five times already.

MaloogaCon could have been better!

Now, I know it sounds like I am simply complaining about the event, but there were a few cool things going on while we were there. First off, there was some amazing cosplay at the event. My son really enjoyed this immensely and tried to take a picture with anyone willing to stop and pose with him. We saw a cosplayer dressed up as Gilgamesh from Final Fantasy and my son was absolutely floored by it. Even I thought it was pretty incredible. It was really cool to see that there are people local to the Tampa area that are that talented and really don’t have too many local opportunities to show off their work. Secondly, there were some local table top gaming companies out there that really have done well for themselves. I wanted to spend a lot of time checking them out, but my son wanted to check everything else out for the nth time, which I was OK with since this was mostly for him.

My disappointment with MaloogaCon is that this convention failed to deliver on just about anything. That may sound harsh, but after spending a full day at the show, my disappointment feels justified. We saw vendors leave early, poorly organized raffles and no sense of order or identity on the show floor. This was literally a convention that felt like it was put together by people that hadn’t ever been to a convention for people that hadn’t ever been to a convention. Let’s unfairly compare this to PAX, where there are vendors lining the outside of the show floor, specific areas for table-top gaming and indie games. The show floor is alive and everything there is worth seeing. I’m being overly tough on MaloogaCon because I felt it had all the potential to be better.

Maybe next year, if there is one for MaloogaCon, they can organize the show a bit better and arrange for something worth seeing there. My son actually had a good time, for that I am glad that he got my $30 ticket’s worth of enjoyment. Personally, I probably would have gone home soon after lunch. Tampa really does need to get an awesome gaming convention and it is obvious we have the people willing to attend. We’ll see what happens from here, I suppose.