There has been another Tesla crash, this time involving a fire truck

The Model S hit the fire truck while going 60mph through a stop light.

The driver of a Tesla Model S survived a crash in South Jordan, Utah, a suburb of Salt Lake City. The Tesla crash, which happened last Friday, May 11, might have been caused by the car’s autopilot system, according to Fox 13 News.

According to Sergeant Samuel Winkler, the Tesla failed to stop at a traffic light and ran into the back of a United Fire Authority vehicle at 60 miles per hour. Witnesses told investigators the car did not attempt to stop or slow down.

The unnamed 28-year-old female driver told investigators she had activated the car’s autopilot system at the time of the crash. She also admitted to looking down at her phone before the crash.

She was headed to an address and she’d entered it into the GPS of that vehicle and then she was comparing the address to her phone to see which was a shorter route. So, she was looking at her phone and she looked up just as the accident was about to happen.

The investigation into the crash is ongoing. Tesla has yet to comment on the case because it hasn’t examined the vehicle logs from the Tesla crash. 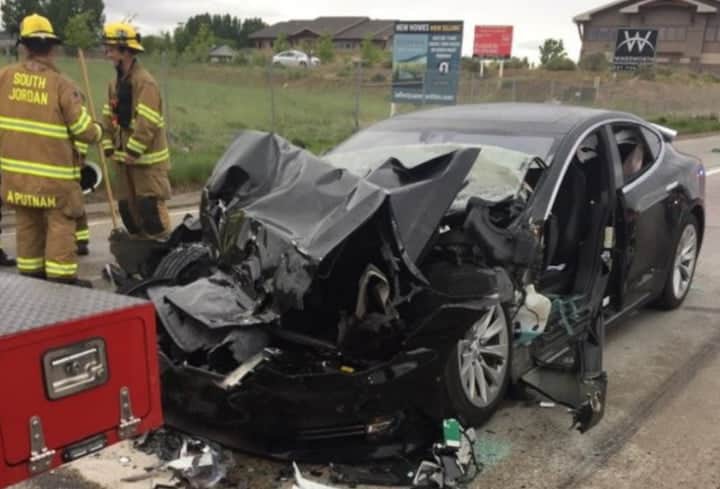 Winkler says even when Tesla’s autopilot system is activated, the driver needs to remain alert, he explains:

These are still semi-autonomous vehicles, so that means the driver is still required to have input into the vehicle. They need to be aware all the time of what’s going on around them.

For his part, Elon Musk, the CEO and product architect at Tesla Inc, released two tweets about the accident. Both comments suggest the story here isn’t that the Tesla crashed, but that the passenger only suffered minor damages:

It’s super messed up that a Tesla crash resulting in a broken ankle is front page news and the ~40,000 people who died in US auto accidents alone in past year get almost no coverage https://t.co/6gD8MzD6VU

What’s actually amazing about this accident is that a Model S hit a fire truck at 60mph and the driver only broke an ankle. An impact at that speed usually results in severe injury or death.

It will be interesting to see whether investigators agree with Musk’s opinion.

Three weeks ago, a Tesla Model X crashed into a Florida gym. In March, an Apple engineer died after his Tesla Model X collided with a barrier in Mountain View, California. Family members said the car had exhibited multiple autopilot issues on trips before the Tesla crash.

For other Tesla news, see: The latest on Tesla’s semi and why now is the time to get excited, and Review: Tesla Model 3.