Review: Yooka-Laylee – wait for a sale on this one

We really had high hopes for Yooka-Laylee, but in the end, it turned out to be a disastrous dud. 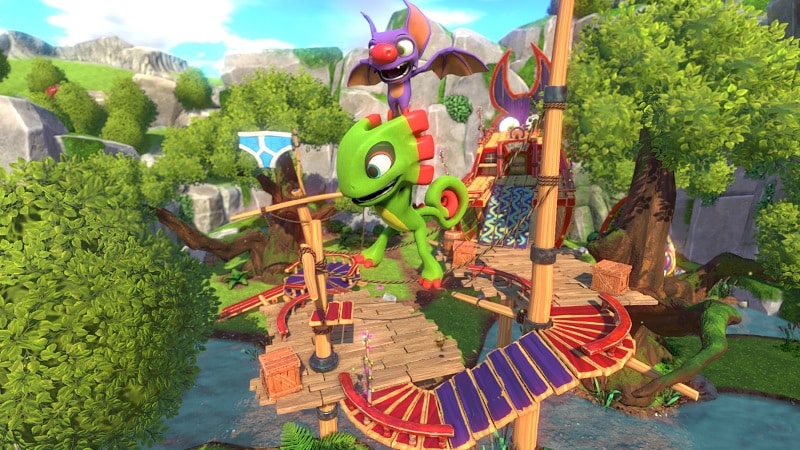 I remember the first time I played Mario 64, I was amazed at the depth of the worlds and what I could do inside them. I didn’t think that the idea could have ever been improved on until Banjo-Kazooie and Donkey Kong 64 came out. I was floored. It felt like Rare took an already concrete idea and polished it up like a diamond with near-perfection.

Unfortunately, as time went on, we began to see less and less of 3D platformers, they pop up from time to time but no one has been able to master the genre, as well as Rare, did. When we all heard that some of the biggest and best names behind Rare’s successful 3D platformers were coming together to make a new studio and game, the internet jumped on it. Literally. Yooka-Laylee hit 1 million dollars on Kickstarter faster than any game before it. With the minds behind the original Rare games working on Yooka-Laylee and a strong financial backing, this game truly looked to be a success story… Right?

Well, here’s the thing about creating a game that runs on nostalgia. When nostalgia wears off, it has to be able to stand on its own two feet and Yooka-Laylee seems to forget this time and again. I’d be completely full of it if I said I didn’t have any fun during my time with Yooka-Laylee and I’ll get into more on that and the game itself shortly, but I found myself leaving the game time and again due to frustration and boredom more often than not. The game is plagued with questionable design choices that range from inconvenient to rage-inducing with the biggest issue being the camera.

Yeah, we need to take a moment to tackle that dumpster fire.

So, Yooka-Laylee’s camera is the toughest enemy I encountered widuringy time playing the game. Anyone familiar with 3D platformers can tell you that the camera is one of the most important pieces to a successful platformer. If the camera is getting stuck, moving on its own, changing the trajectory of jumps or even making it impossible to see if you have the correct approach lined up, you are going to have a bad time.

“There’s no reason that it should have been this bad.”

Yooka-Laylee’s camera is so much worse than all that. It hugs the back of your characters so tightly that they themselves will often become obstacles when you are looking to try and land that double-jump onto a moving platform. In one particular level, the camera would pan a full 90 degrees when I was trying to jump onto a small platform, causing me to reposition myself in mid-air of failing the jump for the 30th time. The camera doesn’t create transparencies so it gets stuck on walls, rocks and anything else. It will move or lock itself into place automatically when it hits an obstacle, meaning that if you aren’t ready to try to push it back in place or prepared for the sudden camera shift, you may actually end up in a bit of trouble.

There’s no reason that it should have been this bad. 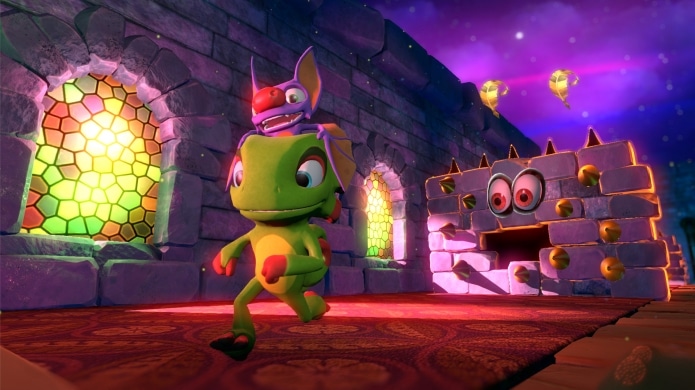 For all the issues that Yooka-Laylee has with the camera and platforming, there is actually a decent enough game under all of the mess. While Yooka and Laylee lack the personality and odd familiarity that Banjo and Kazooie had, the rest of the cast helps fill the void.

The levels within the hub-world of Yooka-Laylee are actually incredibly remarkable and just when you have pushed the content to the limit and it seems like you have gotten all the Pagies, you can turn around and use them to actually expand these worlds. It’s a really neat system and it was exciting to rush back to the world I’d spent time in to open it up more so I could explore more. Collecting Quills allows you to purchase moves from Trowzer the Snake (yup) and these moves will help you advance further in the hub-world and make getting Pagies easier in the five different book worlds.

“Unfortunately, while the concepts of the game are actually quite fun, the game runs like literal hot garbage.”

Unfortunately, while the concepts of the game are actually quite fun, the game runs like literal hot garbage. On top of the issues with the camera, Yooka-Laylee is absolutely plagued by dropped frames and slowdown when there are multiple objects on the screen. Particle effects tend to really make a mess of everything, which makes the game very difficult as you get to some of the more advanced levels with larger hazards. I’m the type of guy that never complains about framerates, but this is just so rough around the edges that it even bothers me.

Update: We got a pre-release patch that actually improved the performance of the game. There are still issues on occasion but the actual rampant performance issues have been cleared up to a point that I am actually going to change the review score significantly.

If I were to sit you in front of this game and tell you that Rare had made a new platformer, you wouldn’t question me. Playtonic perfectly captured everything that made Rare games what they were on the presentation front. In some ways that are really cool, as it is a formula that has been many have attempted to replicate in the past but no one really has gotten it right until now. On the other hand, the Rare style is so heavily emulated that I can’t help but feel like the game loses a little bit of its own identity in the process.

Perhaps one of the most stand-out features of the game’s presentation is the soundtrack. Yooka-Laylee’s soundtrack is masterful and provides the perfect ambiance for exploring a map or running a race or whatever else you are doing. It all feels so familiar as Banjo-Kazooie’s original composer has created this soundtrack. With that, the soundtrack is often muted by some really goofy sound effects and the god-awful “voice” clips.

“Perhaps one of the most stand out features of the game’s presentation is the soundtrack.”

Much like Banjo-Kazooie, characters speak in repeated sound effects that play in some incoherent babble along with the text on the screen. It’s rather annoying and takes it up to 11 when you realizes that more often than not you can’t skip through much of the dialogue either, so you are stuck with bleeding ears after having to read through some banter between Yooka, Laylee and the villain Capital B.  I honestly couldn’t deal with it and would have my kids manage dialogue scenes while I did something else.

Update: It also appears that dialogue can be skipped more now. I’m not sure if it was just the start of if they just added more options later in the game but I seem to be able to cruise through dialogue unless it is happening over gameplay.

Yooka-Laylee really helps waxing nostalgia for the old 3D platformers of old. With that, the game simply does more wrong than right at the end of the day. The uber janky camera, unintuitive design options and generally unfun mini-games really take a lot of the wind out of Yooka-Laylee’s sails. I wouldn’t call it a complete failure or the No Man’s Sky of 2017, instead, it’s a game that WILL scratch an itch if you have been looking for a 3D platformer. Unfortunately, it will also scratch that itch raw and will leave you looking for something to dull the pain after dealing with it for a bit.

I’ll say this, there are a lot of cool little things within Yooka-Laylee. As an indie game, the team should take these items and put them into a new game. If they can learn from the mistakes of Yooka-Laylee, they’ll be just fine. All I can say for now is that waiting for a sale or trying to get the game for under $15 is advisable. Maybe it’ll improve further (I was originally giving this a 4), but the game’s ideas just don’t match its mechanics.

I saw a joke online that summed up Yooka-Laylee perfectly. It’s a medium game. It’s not Rare and it certainly isn’t well done either.

Reader Rating7 Votes
5.4
The Good
I really liked how levels could be expanded
The growing arsenal of moves the duo learns keep the game fresh
This will absolutely scratch that Banjo-Kazooie itch for a bit
The Bad
The camera is really bad
Sound effects range from middling to just annoying
Controls are about as sharp as dollar store butter knife
6
Overall
Buy Now
AmazonGameStop
Related TopicsGameTechieindie gamesPaytonicPlayStation 4RarereviewXbox OneYooka-Laylee