First Impressions: Valheim – the survival game that we’ve all been waiting for 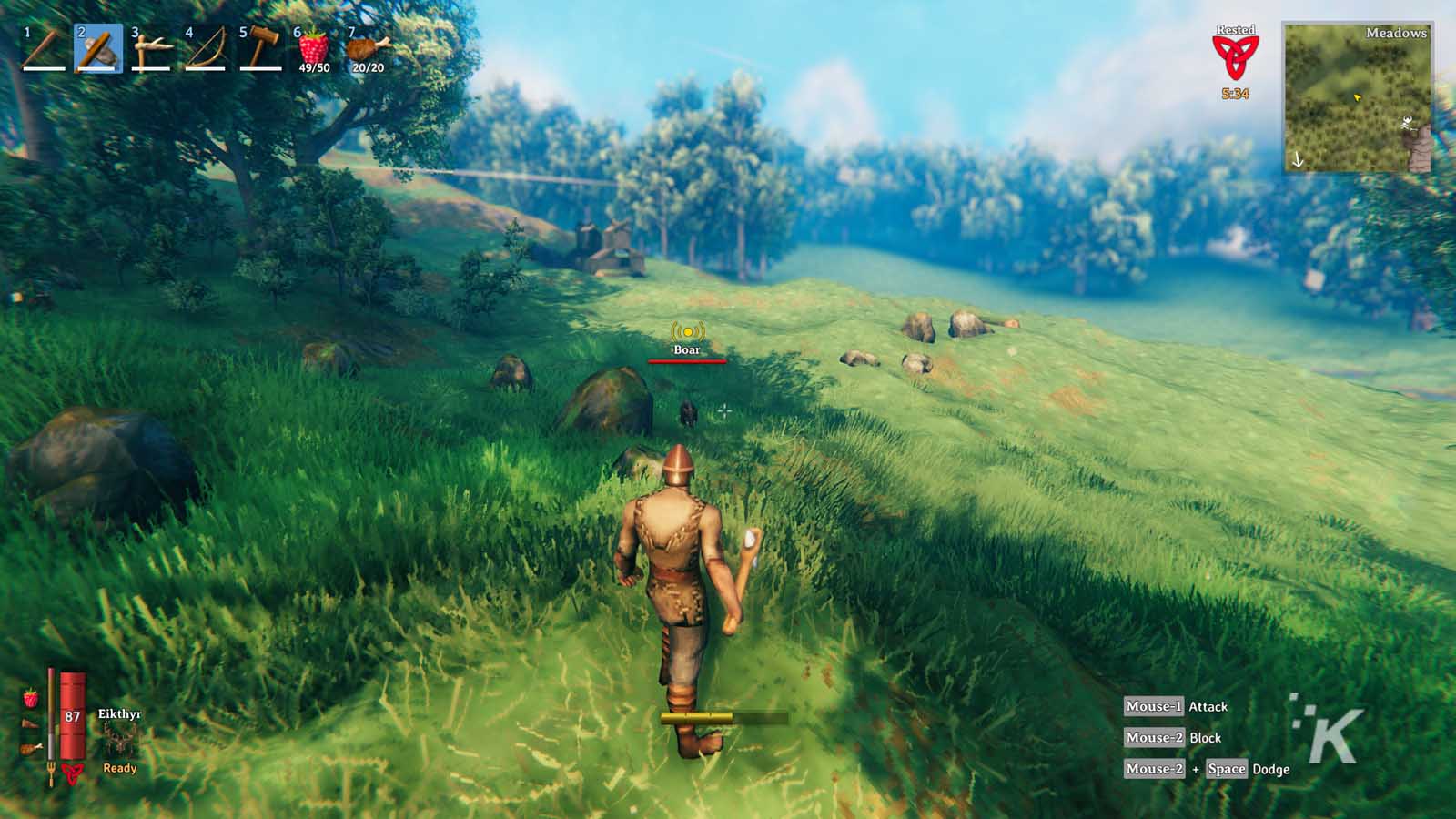 Just under a month ago, indie game studio Iron Gate released Valheim on Steam. Since then it has sold over 5 million copies and reached an impressive 500,000 concurrent players on the platform.

Valheim is a survival game with many RPG aspects. The game is set in a mysterious world within Norse mythology. You play as a slain Viking warrior who is tasked with taking down all of Odin’s ancient enemies, in an effort to set your soul free into Valhalla.

After all of the hype and excitement, Josiah and I decided to finally jump in and see what the game had to offer. I’d be lying if I said I wasn’t pleasantly surprised.

Thrown into the world with nothing but a torch

As with many survival games, in Valheim we were thrown into the mix with nothing but a torch. The first thing that stands out when we loaded into our new procedurally generated world is a group of large rocks sticking up out of the ground in a circle.

Upon these runes are glyphs and faint images of massive monsters. When further expected, we see a description of each individual monster, five in total for now. One of the rocks allows us to mark a location on the in-game map. This will turn out to be a location for summoning the first boss, Eikthyr.

After exploring these symbolic rocks, a dark raven appeared to help us on our journey. The raven tells us that we must gather supplies and build a home, in order to survive the tough nights in Valheim. The bird continues to visit, offering friendly advice to help us along our journey.

One of my favorite parts of this game is the realism when it comes to chopping down trees. After a little scavenging, I was able to craft myself a stone ax with some wood and stones found on the ground. From there, I began chopping away, knowing I would need a good amount of wood to build my Viking homestead.

After successfully chopping down my first tree, it got caught in a small cluster of trees beside it. This occurred with a loud crash accompanied by several falling branches and miscellaneous debris. The trees continued creaking and cracking for a couple of seconds, before eventually settling down.

I quickly realized that to get my hard-earned wood, I would have to take down the trees holding my tree aloft. After only one swing, the entire cluster of trees nearly exploded, apparently already weakened by the falling of my original target. With more loud bangs and crashes, five trees were now falling simultaneously.

I thought the action was over, and I could now begin collecting my wood, but boy was I wrong. One of the trees began rolling down the hill towards me. I tried to escape but to no avail. The tree crashed into my legs taking me down to almost zero health. I was bloodied, but not yet dead. I smiled to myself, as I began to think of all the ways that I could weaponize the forest against my pal, Josiah.

After my exciting escapades in the woods, we decided that it was time start building our home. I found us a nice area, just outside that woods and began some work on leveling the ground with a hoe. Josiah crafted our workbench, which would allow us to build other things within a certain radius.

My first attempt at building a house was quite comical. Coming from Minecraft, I envisioned a seamless building system that would let you build anything anywhere. After placing down only one support post, I began slinging down the floor panels, creating a floor plan that would impress the likes of Odin himself. I quickly found that most of my work was going to waste, with the floors falling shortly after I placed them.

In Valheim, the building is somewhat realistic. I realized that we needed more support. At first, I thought that this might be an annoying touch to an otherwise well-thought-out building system. However, I realized that requiring the right kind of support structure actually helps to make the buildings look better. I quickly went from building a boring square house to a long hall with gorgeous wood beams and a beautiful thatched roof.

When we were done with all of the crafting and gathering we both soon realized that our characters were becoming hungry. The splash screen text saying “you could use another bite” was probably pretty helpful there.

We were almost out of mushrooms and berries we found in the woods, so we decided we should do a little hunting and gathering. After venturing out not too far from our homestead, I began finding food everywhere. There were berries, mushrooms, and raspberries everywhere, but I had heard of an even better meal to be had in Valheim.

In the woods, I found several boars and deer running around. The boars were easy to kill. They were aggressive and ran directly into my ax. The deer were another story. They required some sneaking, as they would run away whenever they saw me coming. Luckily, I had crafted a bow earlier and had been working on my sneaking. Before long I had a full supply of raw meat as well as some various trophies from my kills.

When we met back up, we looked at what kind of food we had found. Josiah found much of the same as me, though he found another kind of beast to harvest meat from. After experimenting with the food for some time, we realized that different foods eaten together gave different buffs to our health. We also realized that we wouldn’t die without food, but would struggle with regaining stamina. It’s nice to play a survival game that doesn’t force you to spend half of your time staving off hunger just to stay alive.

After figuring out which foods would give us the most health, we prepared for our most difficult task yet.

After buffing ourselves as much as possible we crafted up some armor and fire arrows from the resources that we had gathered so far. We were about to begin our toughest quest thus far: Summoning and defeating the demon-deer, Eikthyr.

Armed to the teeth and carrying deer head trophies to offer to the gods, we headed out to the location previously marked on our map. There we found a summoning circle in a lightly wooded area. Once we set ourselves up for battle, I headed down to offer the deer trophies.

After a few seconds of buildup, Eikthyr appeared in front of us in a fiery ball of electricity. It then immediately charged us both as we began to hurl fiery arrows directed at the deer’s head. He stormed us with various lightning attacks and headbutts that constantly kept us on our toes. Instead of just simply attacking the large deer with reckless abandon, Valheim employes a combat system that does require a little thinking, letting you utilize blocking and dodging to avoid incoming attacks. It felt a bit like Dark Souls, but not nearly as punishing.

After a long, hard battle, our enemy was eventually defeated. Fortunately, we both escaped the fight unharmed, and I was able to retrieve the trophy from Eikthyr. We journeyed back to the place where it all began, with the circle of rocks naming our enemies. There we hung Eikthyr’s trophy, marking our journey to salvation 1/5th of the way complete. Our raven friend soon appeared, telling us we will have to explore the world deeper in order to find the next enemy.

My soul is destined for Valhalla

My first few hours in Valheim have been an absolute blast. I can’t wait to explore the world further to see what it has to offer, and I look forward to seeing what kind of Viking mansion I’m able to construct with more practice. Oh, and boats. I’m very excited to hit the high seas.

This game has a lot to offer and I’ve yet to really scratch the surface. I look forward to feeling the wind in my luscious Viking beard while sailing the open seas. With a pretty detailed roadmap already announced, there are also many more things to come to Valheim.

Only one thing is for certain: My soul is destined for Valhalla, and I will make it there no matter what enemies stand in my way. To learn more check out this Valheim progression guide.

Valheim is now available on Steam in Early Access.