Hype. Hype never changes. Apparently neither does the tagline of Fallout, which you hear way too many times at the start of Fallout 4.

Fallout 4’s unbelievable hype took off as soon as the game was announced. Upon it’s release it was praised as phenomenal and panned as literally unplayable garbage. Our review? Well, yeah, it’s a month late because after nearly 100 hours into the game, I can say that for the first time in a long time, I’ve been completely enthralled by a game. This isn’t to say the game is perfect or without fault, believe me, but the hype is well deserved.

Once the game starts and you make and choose your character, everything is fairly straight forward, as far as Bethesda intros go. I really did enjoy the character creation tools, as I was able to make a character I thought looked pretty cool. Control-wise, there were no major changes to the game either, so the intro serves as a friendly push to remember everything you’ve learned before. Of course, once you reach the end of the intro, the game tosses you out into the Boston Commonwealth so you can explore to your heart’s content. 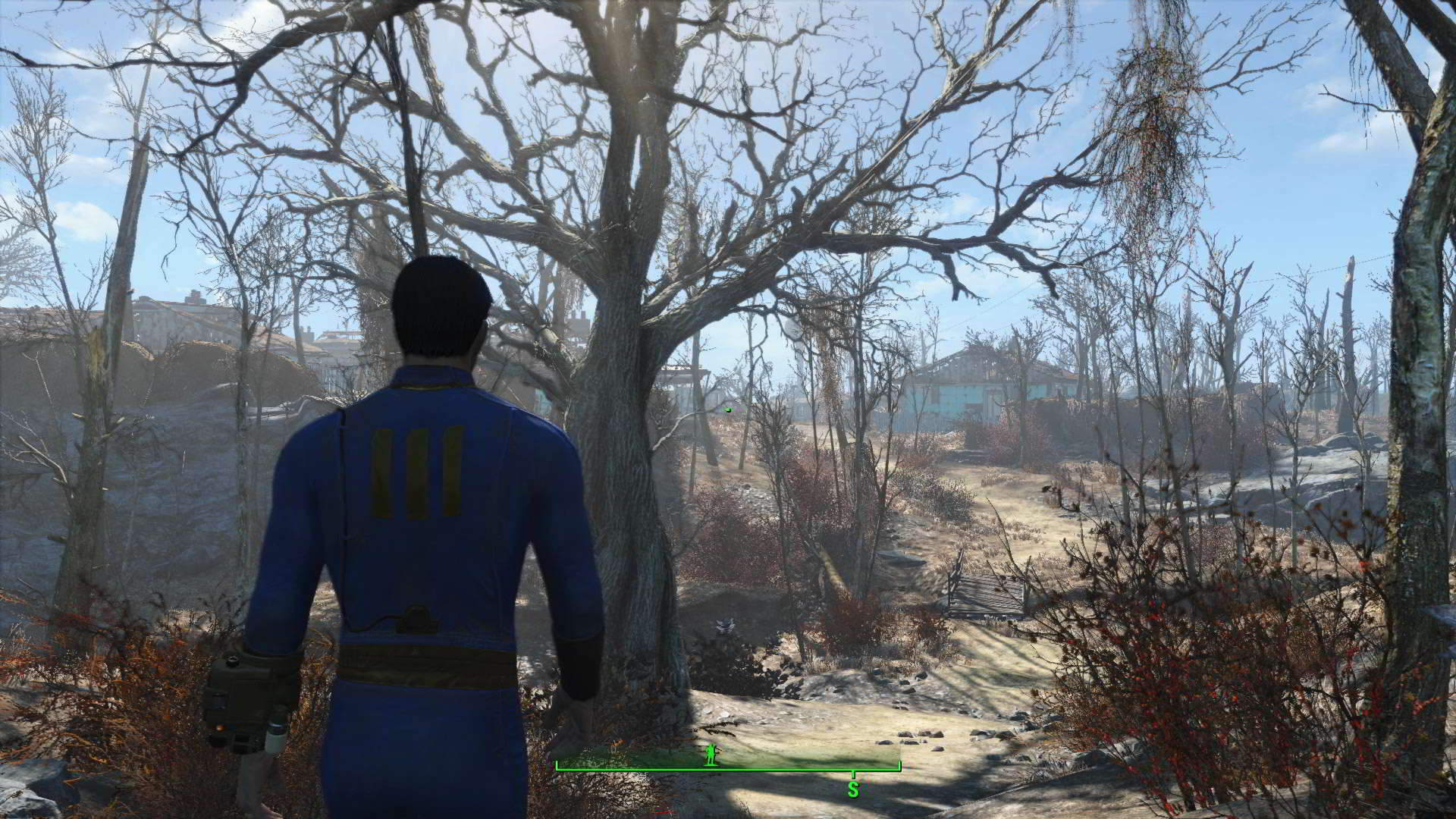 That, for the most part was really the beauty of the game. I didn’t have to go anywhere or do much of anything in any real particular order. I had found all sorts of areas around the Commonwealth before I even went to the game’s major city hub, Diamond City. I recruited all sorts of companions before the game prompted me to meet them for the first time.

“While there is a lot to gush about with Fallout 4, there’s enough that Bethesda didn’t do all that great either.”

Fallout 4 is one of those rare games that is well written to the point that the main story serves as an enhancement to the overall story that you create. After visiting Boston for PAX, I have a love for the place and the scenery. While obviously obliterated by nuclear bombs, Boston somehow retains a good portion of the charm it holds in reality. Plus, it is really cool to see real things in reality and then in a video game.

While there is a lot to gush about with Fallout 4, there’s enough that Bethesda didn’t do all that great either, so let’s start there. The actual menu interface in Fallout 4 seems so much more needlessly complicated than it ever has. It almost feels like they tried to simplify it to a point that it becomes needlessly complicated. Some items will organize into categories they don’t need to be in, stat screens are under sub menus, even S.P.E.C.I.A.L. has been dismantled in a way that works and doesn’t work at the same time. On the topic of that, Fallout has always seemed to offer a few character modifiers to shape the way your game plays out. In Fallout 4 this works a lot differently by spending your perk points on a tree that works a lot like Skyrim. This isn’t bad, but does eliminate the uniqueness that one player can have in relation to another. 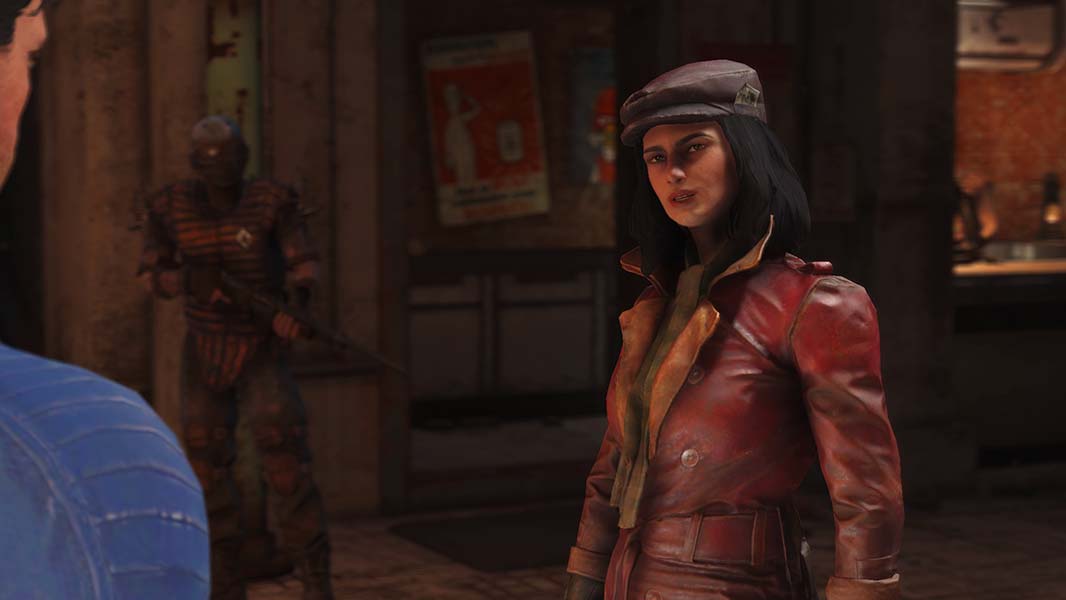 My biggest gripe about the game easily had to be the management of your settlements and followers. Firstly, you have quite a few recruitable followers in this game, and they aren’t supposed to be able to die, so you also keep them as well. Unfortunately, at points throughout the game, you may find that they’ll vanish for no reason whatsoever. At that point in time, you need to visit all the settlements that you’ve unlocked, as well as where you recruited them, to try to find them. 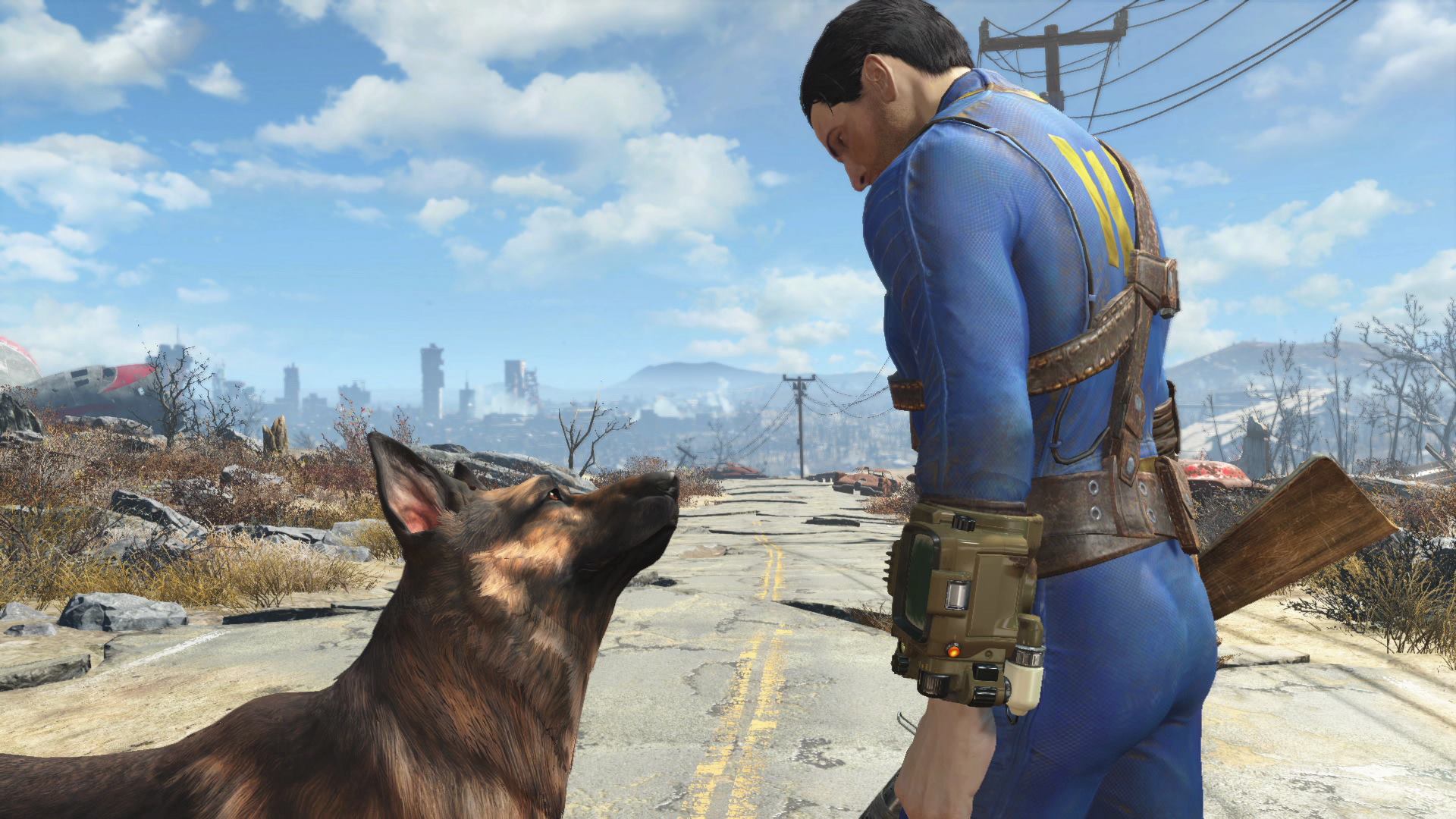 Curie once vanished for me as we were defending a settlement. I visited everywhere I had unlocked and couldn’t find her at all. Finally, after travelling with Cait for a bit, I ran into Curie at a settlement I had visited numerous times in my hunt to find her. That isn’t only frustrating, it’s dumb. I don’t know why I can’t manage my settlements and followers through any simple option. It would make sense and make the experience infinitely more enjoyable that in is already.

“….it is needlessly frustrating and generally useless overall.”

Settlement management can be a huge pain as being able to actually build your settlements up is a huge addition to Fallout in general. I took a small settlement, Hangman’s Alley, and turned it into a multi-floor building that had all sorts of cool stuff. While the building process is OK at best and sometimes objects and walls just sit on thin air, the biggest issue in general is just getting things to work the right way for you. Each level of my settlement had purpose, but I had a hell of a time making sure I had the right people where I needed them. It consisted of running up and down floors to try to get people in the right spots. I’d walk out many times and only come back to finish when I felt like it, as it is needlessly frustrating and generally useless overall. 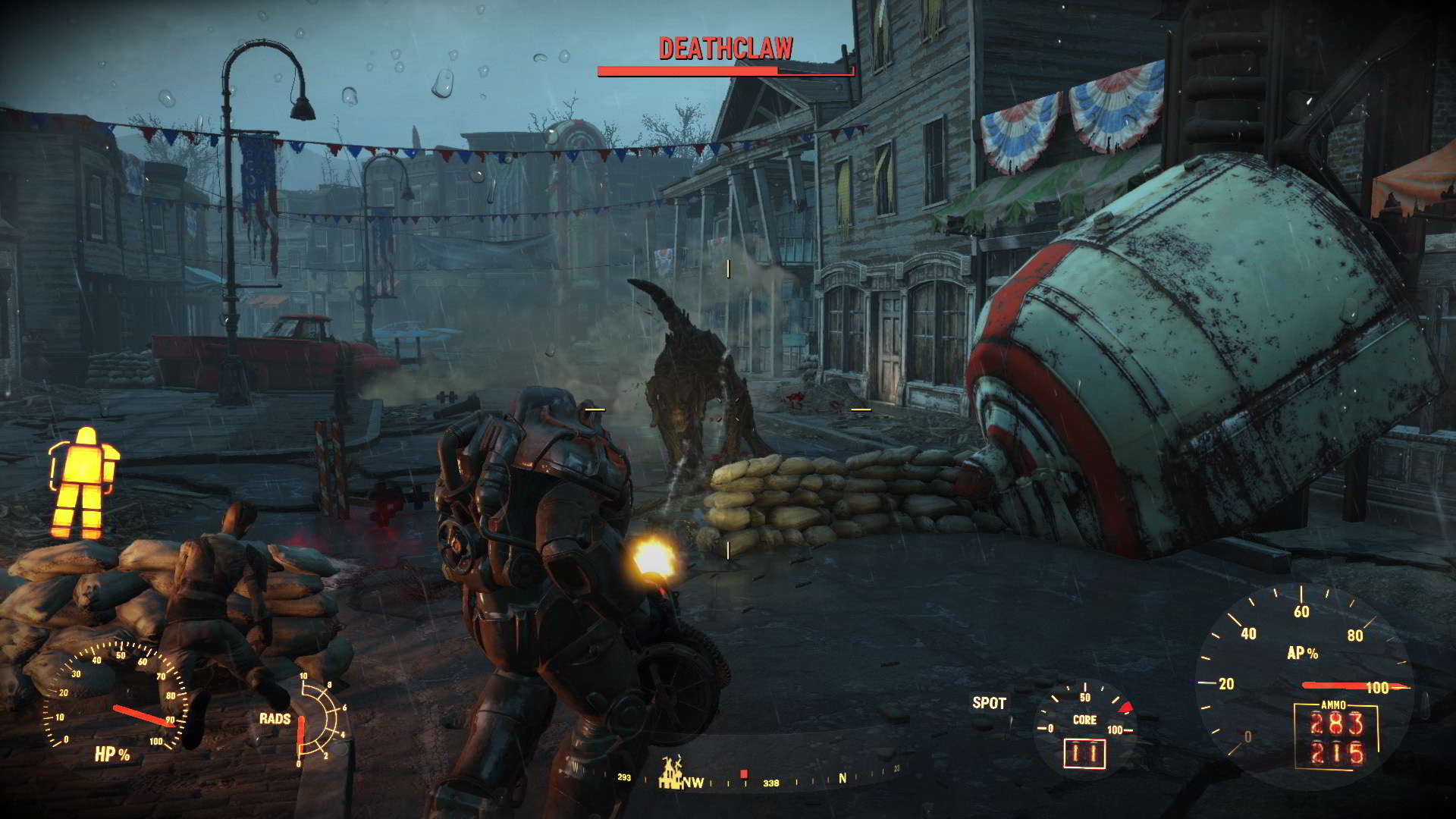 Graphically, there may not be all that much to stop and lose your mind about in Fallout 4 but it is hardly an ugly game. As I said before, they obviously put a lot of work into the Bostonian color pallete to capture the atmosphere of Boston. The game has the occasional odd bug, but I really felt that Fallout 4 did more for me on a graphical level than any Fallout game before it. Plus the set pieces in the game can actually be pretty cool. The game’s atmosphere is incredible.

“Fallout 4 is a game that favors audio over almost any other feature.”

Fallout 4 is a game that favors audio over almost any other feature. Not only can you hear enemies on the prowl around you, you can also use audio to shape your adventure too. Many a time I have found myself in a firefight by running towards the sounds of explosions and gunfire. Guns sound unique and the voice acting for every character is really a great touch this time around. Plus, the radio stations within the game aren’t bad either. 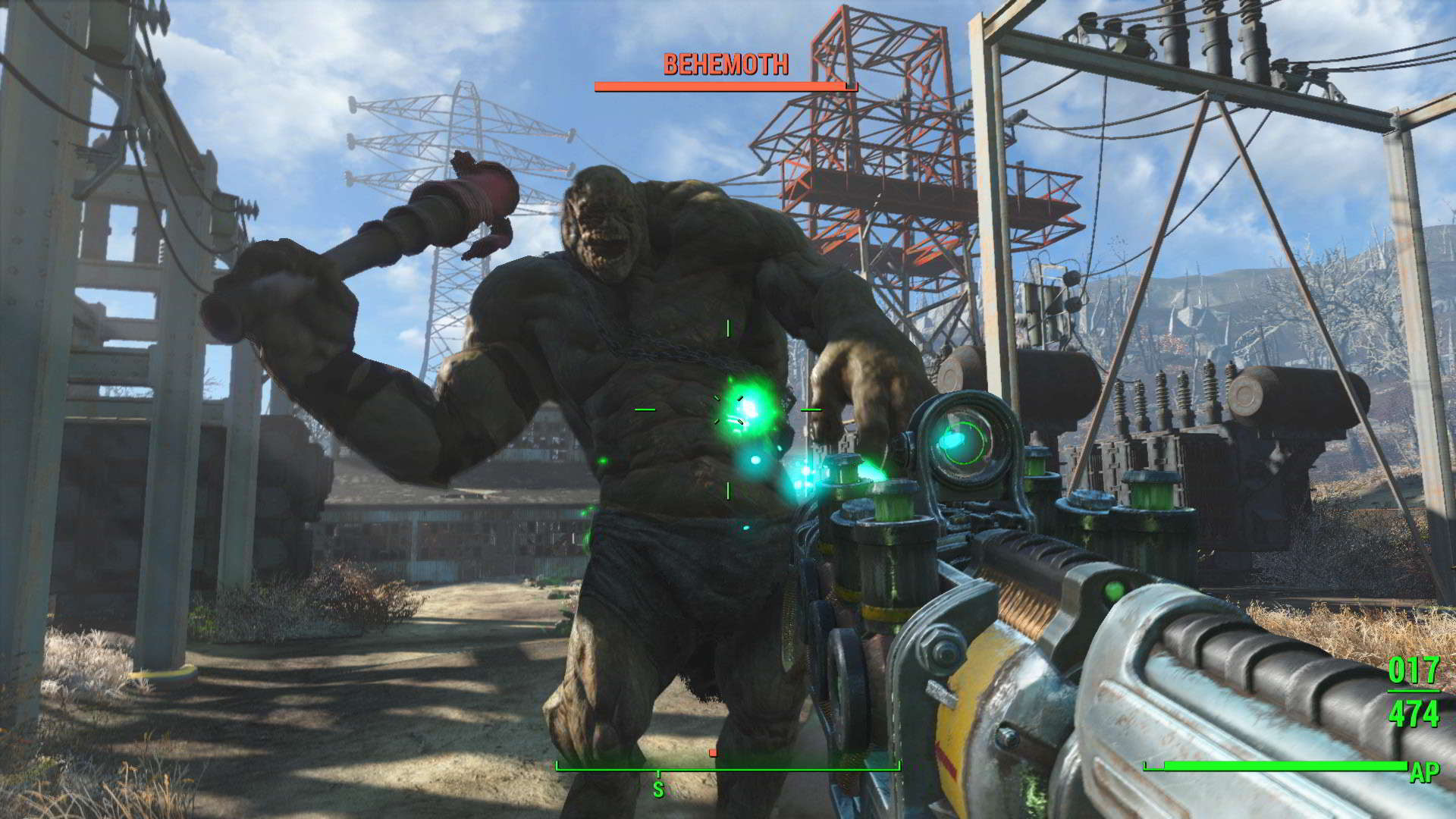 Fallout 4 also delivers a powerful story and has its own fair share of twists and turns. I don’t want to spoil it for you but you are given the proper motivation to do quite a few things in the game. I never needed to stop and think that the game wanted me to do something in particular to advance the storyline. There are a few acts within the game that progress the story from one chapter to another, but there really isn’t anything that gets blocked off as you go about your journey.

“Bethesda put a ton of work into this, as this is absolutely the best part of the game.”

All your followers have their own motivations as well, which impacts your relationship with them if you assist them. You can tell that Bethesda put a ton of work into this, as this is absolutely the best part of the game. The only big issue with it at all is that dialogue options all usually end at one point, regardless of what you say.

Ultimately, as a Bethesda game, Fallout 4 is well ahead of the curve. There are bugs aplenty but nothing I found outside of the occasional vanishing follower that really impeded my progress. If you have somehow made it a month without getting your hands on Fallout 4, you should really try to play the game. I’d be lying if I said that there wasn’t anything left for me to do within the game, and I’m sure that statement will stand for quite awhile as well. A good game and an even better experience.

Reader Rating0 Votes
0
The Good
The game is complex enough that it isn't boring but easy enough that you don't get overly frustrating
The games within the game are all a nice touch
I love the story and the individual personalities and backgrounds of all the characters
Gunplay in Fallout 4 is real good
The Bad
Having followers disappear is one of the worst things this game does
A few bugs will happen from time to time that suck. I had a follower
Menus are needlessly layered and so simple they don't work logically
9.2
Overall
Buy Now
AmazonBest BuyGameStop
Related TopicsBethsedaFallout 4GameTechiePCPlayStation 4reviewXbox One