If you’re looking for deep analysis on how Attack on Titan compares to the Anime, you’re in the wrong place. 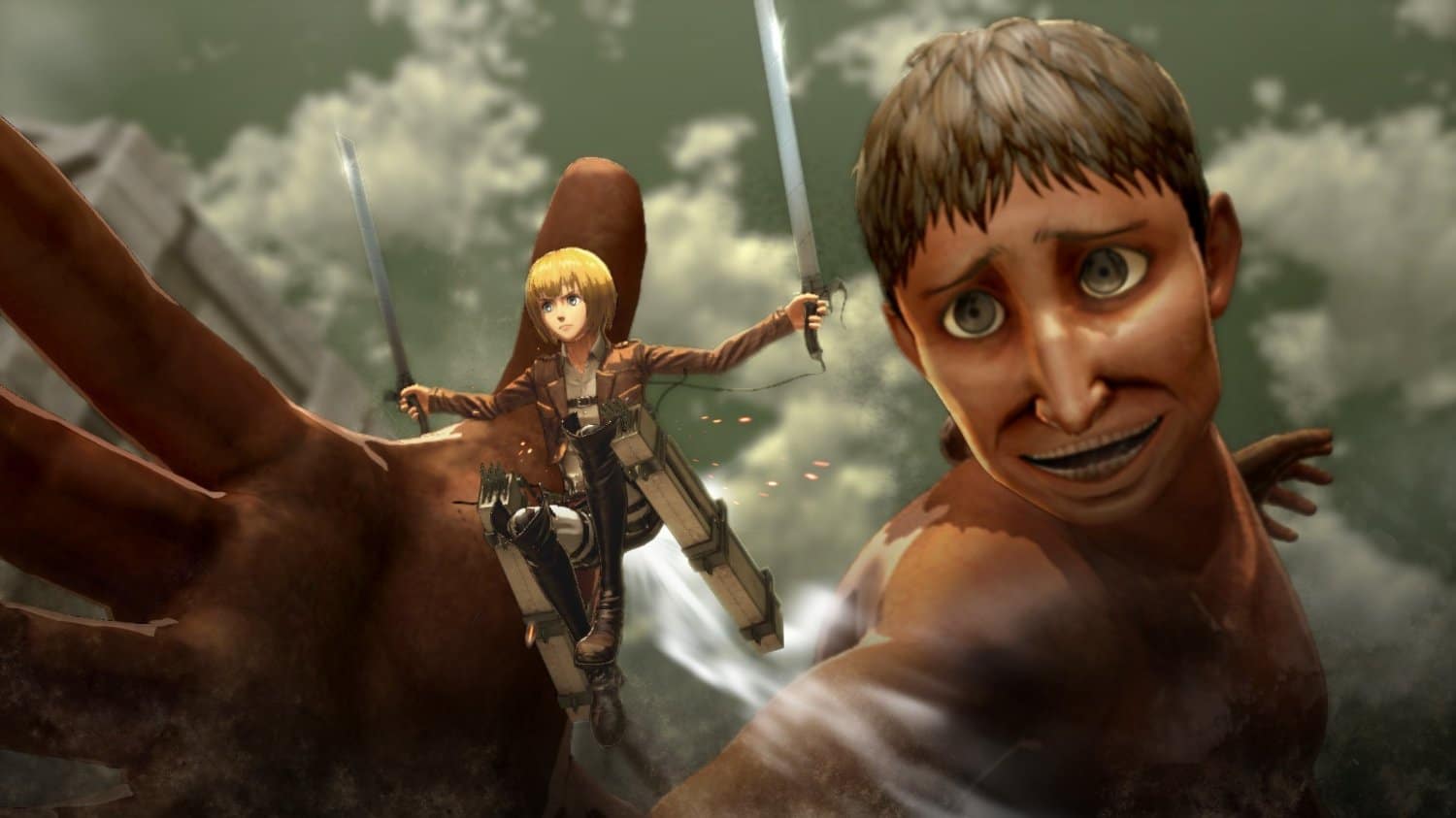 Now that we’ve got that established, let’s talk about Attack on Titan.

Attack on Titan is weird, to say the least. These giant Titans attack humans and for whatever reason seek to eat them. They’re like colossal zombies, but not undead, and they don’t just want brains. It’s an extremely odd concept to grasp, but it’s Japan, so you kind of have to just let it slide and suspend reality to enjoy it.

In Attack on Titan, you play through several of the stories main heroes – which seem to be a group of 18-25-year-olds (but let’s be honest, they’re probably like 13) who are in the defense force for one reason or another. To start, you play as a guy named Eren. Eren and the rest of his crew go off to defend the city against hordes of incoming Titans.

As the story mode continues, you’ll switch to his female counterpart named Mikasa (who is a far better fighter than Eren is), and eventually, you’ll wind up coming across a mysterious Titan. After it’s defeated you find out that it was Eren, and he’s apparently got the ability to turn himself into a Titan for the good of all humanity.

I’ll admit that the story didn’t exactly grab me, but the game does a decent job of presenting it in a way that you can follow (which is a good thing since friends have told me that the Anime is really tough to follow and bounces all over the place) and I felt like I got the gist of what was going on. There’s a whole lot of stuff going on in the Trost District.

Each story mode character has a set of abilities and stats that allow them to be proficient in certain areas, so you’ve gotta learn how to prepare for their shortcomings. Mikasa can’t take damage, but she’s very fast, agile, and can do multiple chain dash attacks. Leon can do the same dash attacks but he doesn’t move as well and hits harder – though his blades dull quicker to compensate.

As you play through the story, you’ll unlock ten characters to choose from in Expedition mode which is basically a free play mode if you’re familiar with Dynasty Warriors where you can level up the characters and play co-op with friends online. The story mode took me about 8 hours to get through, but once you’ve unlocked the characters for Expedition mode, the story mode continues with a new merchant who allows you to create Titan models for Eren, and new missions to undertake.

Speaking of Dynasty Warriors, this is an Omega Force game, so if you’re not familiar with or a fan of Dynasty Warriors, you might find some major annoyances. The camera and the minimap are easily the biggest offenders. If you know Dynasty Warriors, you know that rotating the camera manually is a must. It’s not too bad when you’re roaming the plains on horseback, but when you’re on grappling hooks swinging through buildings it can quickly become far too difficult to keep your eye on the action properly. The minimap also updates the arrow to show which direction you’re going slowly, which means you’ll often be moving the wrong way for a few seconds before realizing you needed to go the other way.

If you can get past the few annoyances, this game is a ton of fun. The control scheme isn’t the best, as you have to press R1 to lock on, use the right stick to target a body part, and then press square to grapple on – but once you get the hang of it, you get used to it and it feels strangely unique yet satisfying. Certainly more so than just spamming square and triangle as you would in Dynasty Warriors.

You can navigate the map pretty quickly as your characters can carry all their gear (these are what the grappling hooks and ropes are called) to traverse the map from point to point akin to the way Spiderman swings around the city in the old Neversoft Spiderman games. As a fan of both Spiderman games and Dynasty Warriors games, these two familiar meshings feel surprisingly well connected to me and I’ve found Attack on Titan nothing but fun to play – but then again I was already prepared for the nuances that will undoubtedly annoy newcomers.

Although I find Attack on Titan to be extremely fun, it’s far from perfect. The story has some interesting moments but ultimately I still don’t understand the bases for why things happen or why the Titans want to eat humans instead or just killing them. I’m sure there might be an explanation in the Anime, or possibly in the tons of character logs/story supplement documents you’ll unlock as you play – but honestly, I wasn’t that involved in the story to go looking to find the answers for my questions. Sometimes you don’t need deep fleshed out lore just to have a good time and Attack on Titan is a great example of a fast paced frantic title that’s fun to just pick up and run with.

Story aside, there are frame rate issues – especially when you’re near a Titan who’s just been subjugated (killed). The smoke effects will make the game absolutely crawl if you’re stuck behind a dying model and that effect is the only thing on the screen. It quickly picks back up, but it’s noticeable enough to be frustrating when you’ve killed an enemy and there’s still three more Titans right beside you waiting to attack. I was grabbed more often than not when the framerate dipped and that sucked.

Weapon crafting and upgrading are cool, but I found that the materials that really mattered were mostly few and far between and you’d want to continually go out and grind in order to find the better parts so you can upgrade your blade, scabbards, and gear. Repetition is the name of the game and that’s to be expected any time you see Omega Force’s name on the box.

Being able to individually target limbs and dissect your enemies while flying around on steel cables and grappling hooks is pretty damn badass. In spite of the flaws, Attack on Titan is a great way to introduce people to Omega Force (that is if they didn’t play the excellent Hyrule Warriors) and hopefully, it’ll introduce more people to Dynasty Warriors as well.