Destiny 2 is the game I was totally hyped to play three years ago, finally. 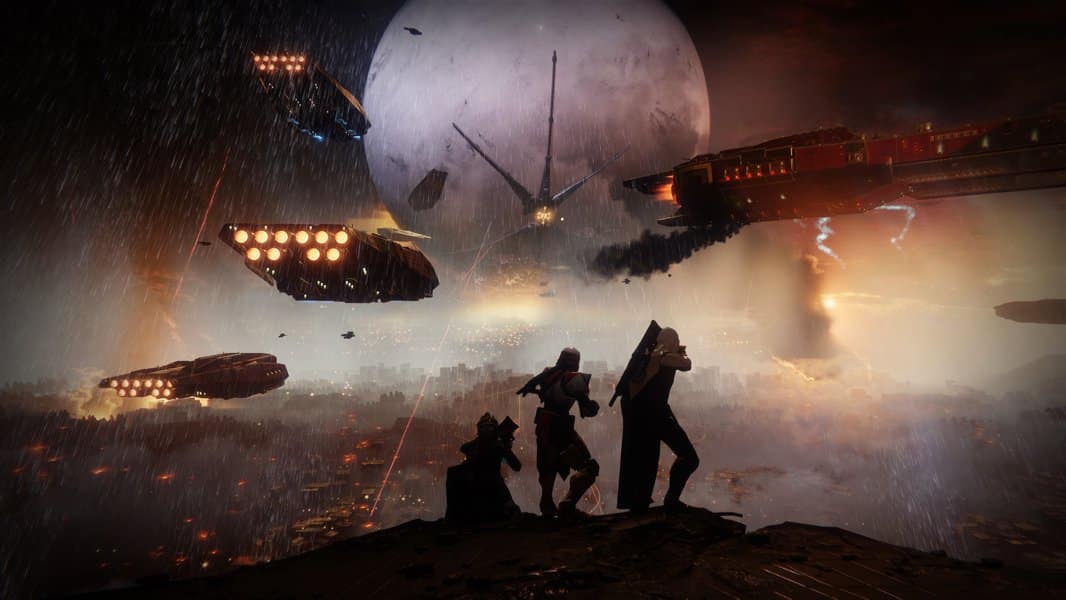 When Destiny came out three years ago, the game was the talk of the town. Bungie fans were hoping for a successor to the popular Halo series. Press hyped it up, rather unjustly. I was totally part of the problem there.

The game didn’t include a lot of what we saw or were told about at launch. Still, it ended up getting fairly good reviews based off of what they hoped the game had the potential for. Unfortunately, while stories grew a bit through DLC and the MMO grind was eased a little with new events, most of the story was still only available out of the game, and Sepiks Prime was still a typical strike that players would deal with.

My experience at E3 had potential for Destiny 2. The single player elements showcased a story that had yet to be seen in Destiny, with maybe the final mission of Rise of Iron, which had you dispatching the enslaved Siva-infested corpses of legendary guardians. Even that moment paled in comparison to the opening moments of Destiny 2. We’ll talk more on that in a minute. 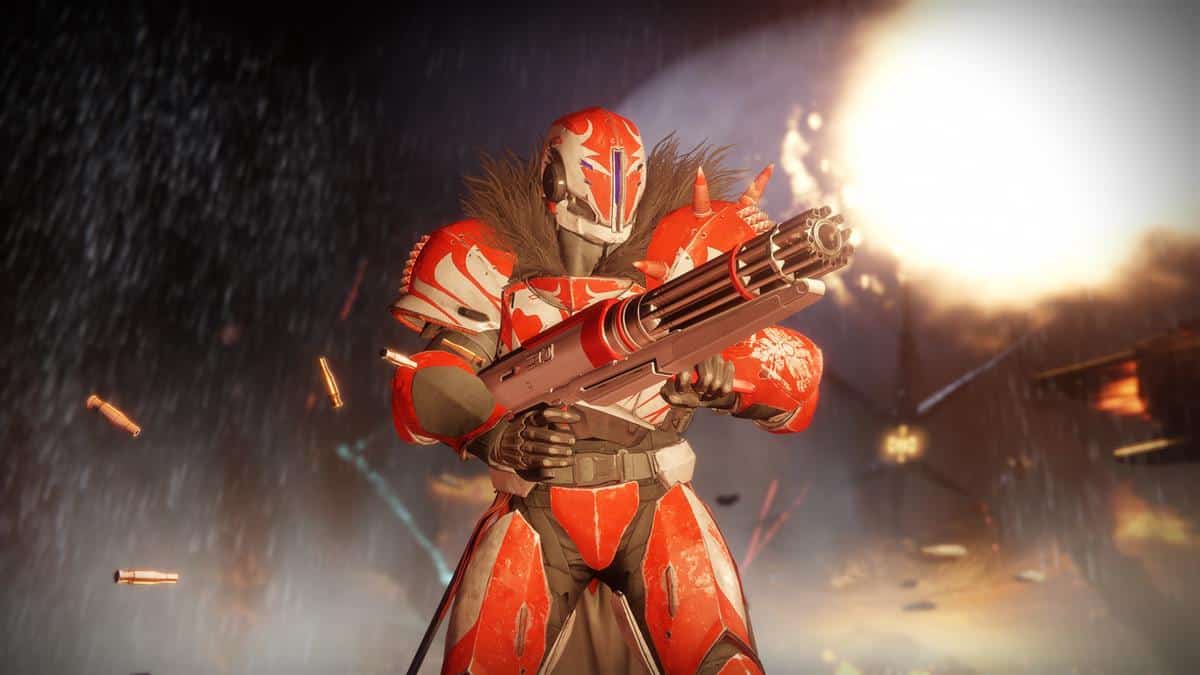 Then, when it came down to PvP elements, Destiny 2 showcased incredibly solid gameplay. I wouldn’t be able to weigh in until the game came out completely. I wasn’t about to hype up a game that ended up being less than what I was shown.

So when you fire up Destiny 2, you are greeted with moments that highlighted your Destiny 1 career. It was great to see the date that I started the game, the time I beat the main story when I beat Vault of Glass, House of Wolves and even cleared Rise of Iron. It made me feel like I was a celebrated war hero going into the game. Of course, if you have watched any of the commercials, you already are aware that they are building us up to let us down… hard. 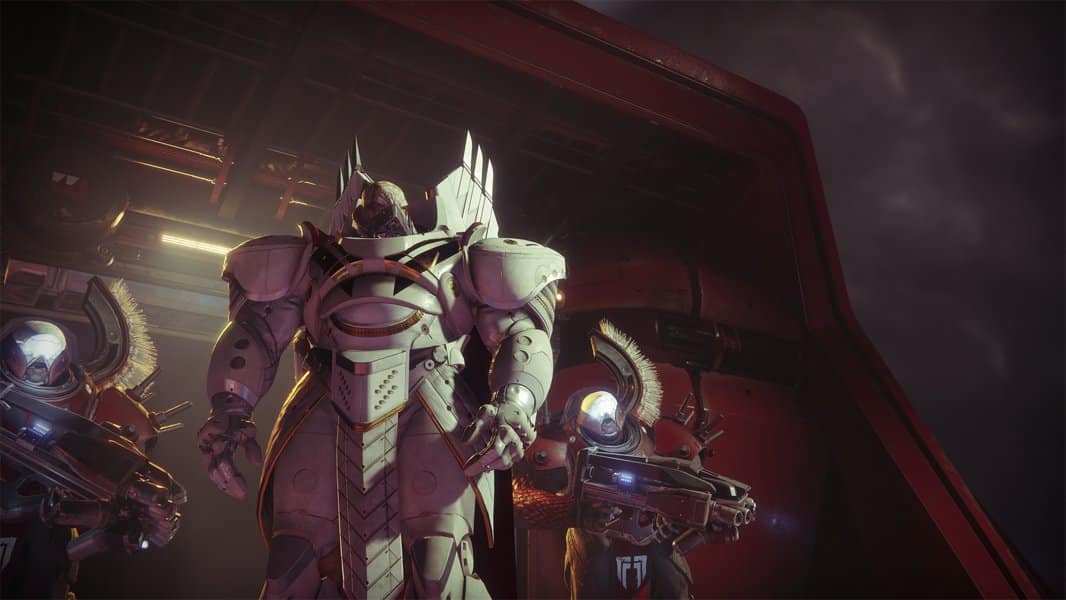 When Destiny 2’s story kicks off, the Tower is ambushed by Dominus Ghaul and the Red Legion. You still feel like a million bucks and easily tear your way through threats until an event happens that severely limits your abilities. It’s not as silly as “oh, you lost all your stuff” and they do a great job of making you feel completely powerless after.

You eventually meet people doing their best to survive and also cross paths with a few familiar faces as well. There’s a cloud of despair throughout this point in the game. You feel like you’ve lost and actually feel like the main character of the story, rather than a ride along to the story itself. It’s almost disappointing that the game gives you back your powers quick enough, it really was a fresh enough moment that I feel like they could have made the full 1-20 grind the battle to get your powers back.

“The story does a fantastic job of developing the characters of  Cayde-6, Ikora and even the stuffy Zavala”

Even with that, I feel like I am nitpicking. The story does a fantastic job of developing the characters of  Cayde-6, Ikora and even the stuffy Zavala. In part of my game, Cayde-6 echoes a grimoire card from the beginning of the first game. He waxes poetic about the virtues of the Traveler and Rasputin and how at the end of the day we control our fate. Then he drops this fantastic line “I was a servant too. I was an instrument of war, bound to the will of a lesser master. But I learned to be something more…”

Zavala deals with his failures and his guilt over not being able to protect the Tower. It’s relatively heavy since he’s supposed to be the “boring” guy, he also shows he’s willing to lose it all to get a shot at evening the score.

Ikora’s story is pretty dark, dealing with the newfound mortality of most of the Guardians and if the Traveler is really this bastion of hope or just a useful tool that was harnessed by the Guardians and turned into legend. Ultimately, Cayde’s meddling leads to saving the day, and we are back to the post-game grind. 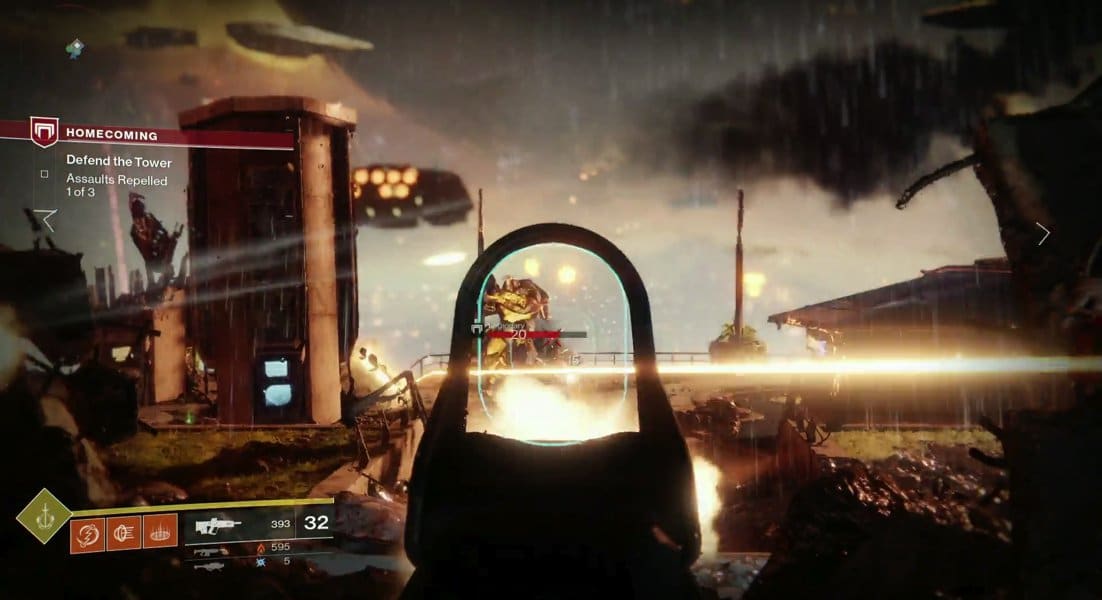 That grind as mentioned above isn’t as dry as it was before. This time around I feel like there’s more reward for growth and with strikes tucked away into post-game content, you don’t feel like you are forced to go back to the entry-level content to chase some advancements. Instead, while grinding to level 20, I focused on public events and Crucible content. It felt the end-game content feel much more rewarding.

“Yes, teamwork matters and it is a big freaking deal.”

By the way, I didn’t enjoy Crucible content all that much in the first game, and most games ended up feeling like you lost because the enemy team built up much more momentum than you did and there was no coming back.

“I’m always a sucker for “defend/attack the base” style game types.”

In the updated Crucible, the times I die or have lost matches are traceable to mistakes I’ve made. You can’t play the hero in the new Crucible. Instead, you can go with your strike team and roll through your enemies. You can use planning and preparation to gain the upper hand, as it isn’t always about who has the better weapons. Yes, teamwork matters and it is a big freaking deal. I had fun with the new game type as well; I’m always a sucker for “defend/attack the base” style game types. 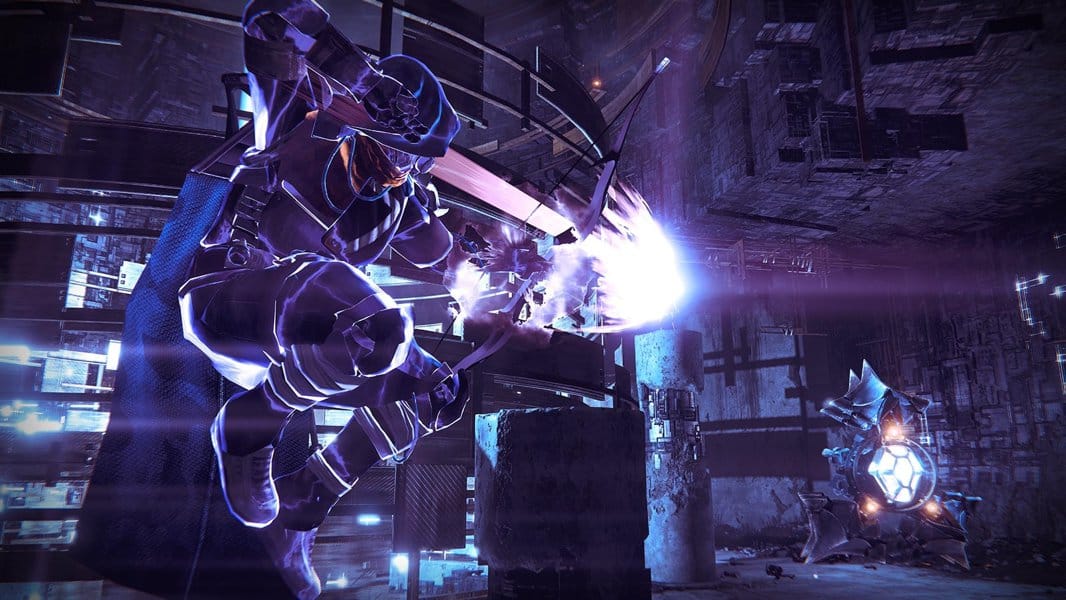 I can’t help but feel like they tweaked the core elements of the game to be more impactful. Guns are less pea shooters and more weapons with serious stopping power. I found a hand cannon that felt like it would literally put a hole in any idiot that got in front of my reticle. At the same time, I’ve been in firefights where I find myself running for cover because a missed shot sounded like the next would take me down with the next well-aimed one.

“I can’t help but feel like they tweaked the core elements of the game to be more impactful.”

All of this is not without fault, however. When you get your powers back, you get a relatively fresh take on an ability from the first game. For example, my hunter originally had Blade Dancer as a subclass in Destiny 1, but I got a nifty staff in Destiny 2. (Does that make me a pole dancer?) It’s familiar, yet unique enough to feel like growth. Then, after a bit, you earn two of the same abilities from the first game. No real tweaks, just essentially copy and paste.

There is also the issue of microtransactions. Destiny 1 had them in the silver cash shop, offering up shaders, emotes and a few other goodies at the premium price of cold hard cash. It was completely ignorable though as there were plenty of shaders and even a few emotes out there available for free. 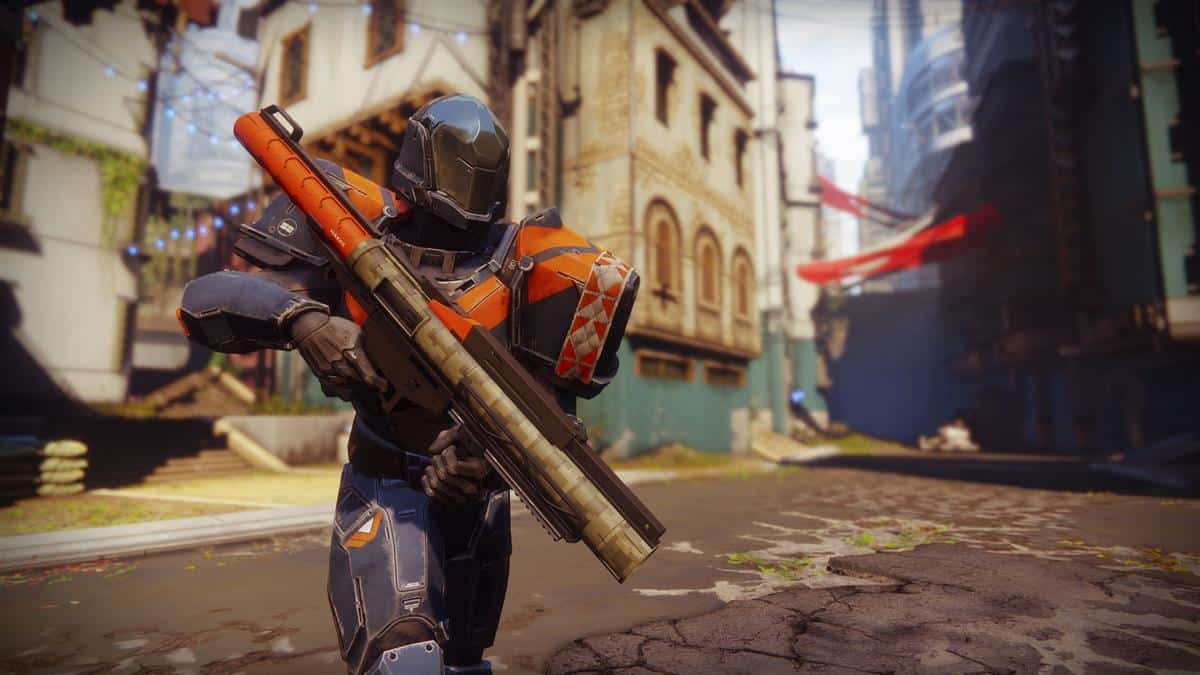 This time around, shaders are single use, meaning that once you have used them, they are gone forever. You can use them on Sparrows and ships, which is nice and the textures are improved, but you can’t just change your armor’s appearance as you feel like it anymore. It was a feature I greatly enjoyed, and I hate that it is completely behind a paywall in this game, outside of a taste to keep you hungry every post-20 level.

I wouldn’t have cared about it as much if that and weapon upgrades, which were both free in the original game, weren’t tucked away in the sequel. It’s like Activision just had to piss on the party a little bit in their own way.

Destiny 2 is the game that Destiny should have been, while at the same time feeling like a mere expansion of the first game. Locales feel incredible, but also make you ask why this wasn’t in the first game.

There’s a lot less color by numbers, and that’s a good look on the future of Destiny overall. The good parts of the game got better and the bad parts, for the most part, got good. It’s so odd to call this one a sequel though, as it isn’t so much of a continuation of the story as the definitive Destiny experience.

Pick this one up.

Reader Rating2 Votes
6.2
The Good
The story is a gripping ride from the start, something old players will be surprised with
You feel like the main character of the story this time around, with the moves and firepower to back it up
The "grindy" content is locked in the post-game. This is wonderful because it all feels fresh when you start running it
The presentation is given an overhaul that you would have never expected the game needed. Soundtrack is wonderful!
The Bad
Most of the actual advertised features that are in the ad campaign for the game (customization) are locked behind a cash paywall.
This game makes Destiny woefully inadequate, which by association actually makes this feel less like a sequel
I wish there were more new abilities to play around with, going with what is comfortable feels like a copout at this point
8
Overall
Buy Now
Amazon
Related TopicsActivisionBungiedestinyDestiny 2Game ReviewsNewsReviews