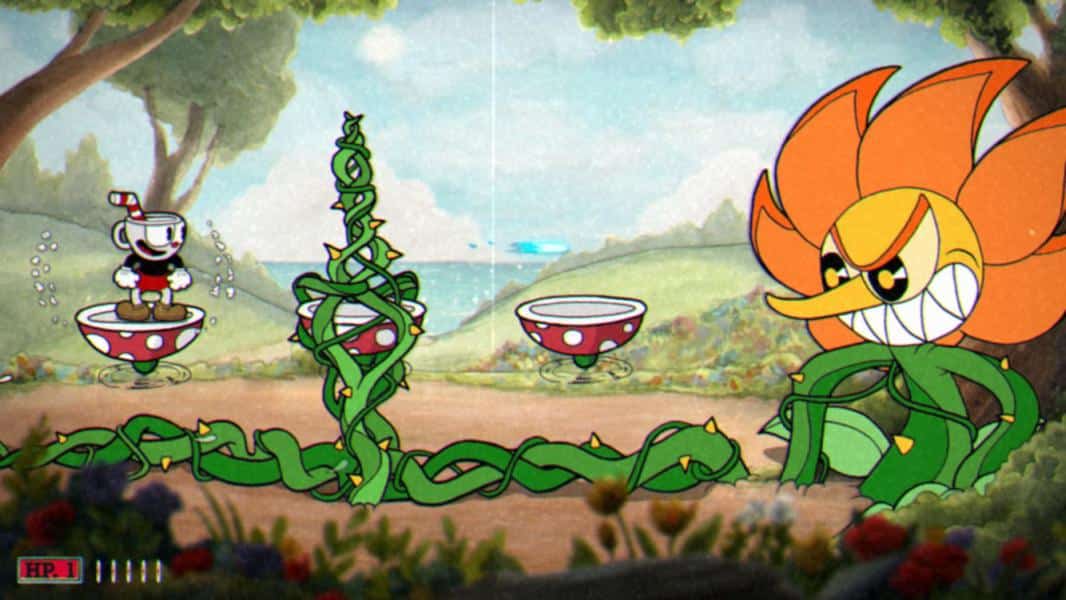 Image: Windows Central
The Good
Presentation is amazing
Art
sound
and music are perfect
Cuphead and Mugman are charming protagonists
Cuphead is challenging and feels rewarding when you earn progression
The Bad
Too much reliability on randomly generated elements for inflated difficulty
Cuphead is often flat out unfair and your skill won't change that
Boss fights are often too lengthy sections with no checkpoints
The story is passable but weak
8

I’m a bit of a masochist, so when I heard Cuphead was being touted as this “hard-as-balls” platformer or “the Dark Souls of platforming” I knew I had to get my hands on it. I saw Cuphead at several trade shows but never touched it because I wanted a purely untainted experience once the final game was ready. I gave my controller a good cleaning and prepared to have my ass handed to me.

The premise of Cuphead is a simple but a cheesy one – he and Mugman venture out too far, find a casino, roll the dice, lose, and wind up becoming the Devil’s henchmen to save their souls. If you want a crash course on the story, the title song does a good job explaining what happens before you ever even start playing the game.

While the story isn’t anything unique or memorable, where Cuphead absolutely shines is in its presentation. The aesthetic of Cuphead is meant to rival that of a 1930’s cartoon, and as far as style goes, the art, music, and sounds are absolutely perfect. From the barbershop quartet on the second island to the sinister laugh of the seemingly shady merchant, every single sound fits perfectly. Hearing every snap as Cuphead flings his finger bullets is meticulously crafted to deliver an incredibly memorable experience.

Even if you don’t like Cuphead’s gameplay or genre, you can’t deny the charm. Cuphead is an immediately recognizable game and will be remembered for years to come.

While Cuphead absolutely nails the presentation, the polish starts to tarnish a bit once you get into the game. Touted as a platformer, Cuphead is actually more of a Boss Rush battle, a side-scrolling shoot-em-up, and occasionally an actual platforming section.

Cuphead feels like they spent so much time trying to perfect the atmosphere that they forgot to give the gameplay a practical focus. I expected difficult platforming with challenging bosses at the end, and what I got were segments of a well-designed game filled with artificially inflated difficulty. This isn’t to say that Cuphead is a lousy game – because it’s far from that – but Cuphead is its own worst enemy, and the game holds itself back based on some of the decisions made in the design.

Cuphead’s boss battles are memorable and engaging, but they’re done in sections, and there aren’t any checkpoints during the fight, so if you’re able to figure the first parts out without much trouble but die right before you can kill the boss, you have to start the entire fight again. This makes bosses with challenging phases even more frustrating because you have to survive all the other nonsense in order to try again.

What makes this worse is that the fights have randomly generated elements that aren’t always in favor of the player. Djimmi The Great will either start a fight by summoning a treasure chest that hurls treasures or he will summon cat sarcophaguses that open and send little golden cats after Cuphead’s plane. Both of these sections are annoying to get through, and the treasure chest is considerably worse because of the flying scimitars. This also occurs in the first flying section where Hilda Berg can either become twin sisters who spin out a ball that shoots a 360-degree spinning bullet attack, or she can become Cupid and shoot golden arrows that also come with three blue stars that are considerably harder to avoid than the attacks from the sisters.

This also continues in the platformer style boss battles. Baroness Von Bon Bon is a fairly easy fight, depending on if you’ve got the weapon that allows bullets to chase enemies – but it’s significantly harder depending on the order of minibosses that appear. If you get the Candy Corn or the Waffle first, you’re in for a safer battle. If you get the Gumball machine guy or the Jawbreaker, you’re going to have a much harder time as the Baroness starts firing cloud blasts from her shotgun, and tiny little jellybeans spawn and run across the bottom of the screen that are easy to miss as the fight ensues.

The pure random elements of the fight often stack the deck against the player, especially when you get to fights like Rumor Honeybottoms where the beehive has randomly placed platforms that usually pile on one side or the other and dashing to avoid attacks will likely leave you falling to your death (or at least falling to take damage.)

Is Cuphead hard as balls? Cuphead is definitely a challenging game based on the design alone. When Cuphead’s RNG (random number generation) deals you a decent hand, it’s not all that bad. In fact, most of the time Cuphead is a delightful experience, but it wasn’t what I had hoped it was going to be. Cuphead is an excellent game, but the unpredictable inflated difficulty made me step back and appreciate how much games like Dark Souls and Bloodborne aren’t necessarily super hard, but instead challenge you to learn how to play them the way they want to be played.

Cuphead doesn’t offer that same learning experience – it almost always boils down to pure luck. Skill is less of a deciding factor when going through Cuphead’s paces, though it obviously still plays a part.

While I could probably write more paragraphs explaining the nuances of how I don’t think Cuphead deserves to be compared to Dark Souls – and I could write an entire article about how I’m sick of everyone calling anything that’s even slightly difficult the Dark Souls of anything – I also have to note that I ran into a bunch of issues during my time with Cuphead.

I reviewed Cuphead using the Windows 10/Xbox One Play Anywhere version, and on PC, Cuphead refused to save progress if you alt+tabbed out of the game. This is a glitch that seems to have been fixed as of the time of writing this, but I had more problems that seem to be still present. Parrying seems to have a hard time reliably working if you’re coming from underneath a parryable item.

During my time trying to play on Xbox One, Cuphead would randomly hard freeze on successful parries, though I suspect that may have been more related to the last Xbox Preview Dashboard, so I can’t hold that against the game, but I wanted to make sure it was mentioned. Perhaps even more annoying than the save glitch, I had issues where Cuphead would continually stop detecting my controller. My controller was hardwired and never once came unplugged, but Cuphead would pause and tell me to reconnect the controller. I could always just press B to remove the error, but it’s really tough to keep fighting when the game stops for no apparent reason.

Technical issues aside, Cuphead is still a terrific experience. If you’re a fan of platformers, Cuphead will likely scratch an itch you didn’t even know you had. The music and sounds are terrific, and the art style is immaculate – it’s just a shame that gameplay falls victim to hoping you’re blessed by RNGesus regardless of how good your actual skill level is.

Cuphead was played on both Windows 10 as well as Xbox One for the purposes of this review. Cuphead was provided for review by Microsoft.