Brace yourself, Horizon’s gone Down Under. 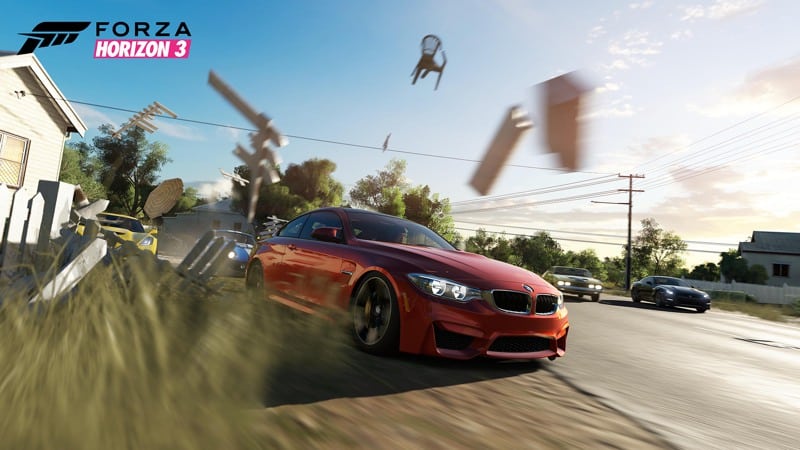 I’m in no way a car enthusiast, but there’s something about Forza Horizon that really speaks to me as a gamer who enjoys a good racer. Perhaps it’s Horizon’s arcade like feel that sets it apart, but Forza Horizon 3 might just be the best racing game since Criterion’s Burnout Paradise from 2008.

Taking nothing away from the previous two entries, Forza Horizon 3 is the first in the series that actually grabbed me and commanded more of my attention.

Forza’s third Horizon Festival heads off into the land of the Wallaby, the Dingo, and horrifying amounts of spiders. While this is a terrifying concept in real life, there’s nothing more awesome than racing around The Outback.

Cruising up the coastline along the beaches, tearing through the rain forests, and drifting through the city skyline is an absolutely incredibly thrilling experience, one that makes Forza Horizon 3 really come to life. The visuals have never looked better, and I’d argue that Forza Horizon 3’s landscapes make the meticulously detailed cars look like an afterthought.

Seriously, this game is absolutely gorgeous whether you play it on Xbox One or on PC.

Maybe I’ve got better since Horizon 2, but driving feels much smoother and less intensive as the previous entries in the series. In the previous games, I always had to turn off most of the assists in order to feel somewhat competent and not just continually slide off the roads. Forza Horizon 3 feels perfect from the moment you start your first race. Without a single thought, I jumped right in and started racing like I’d been doing it for years. I actually lost my first race, but made up for it on the next by completely embarrassing the competition.

As I cruised around the familiar looking starting area, I started venturing away from spots that were similar to those found in Europe, and instead found myself having a ridiculous amount of fun doing Bucket List challenges flying across sand dunes in a tricked out buggy. The bucket list challenges add a “to-do” list of things around the Australian regions, and they present challenges that the player themselves may have never even considering doing on their own. You also get to learn about real-life landmarks and things while you explore, which brings even more life to the vibrant game world.

Perhaps the biggest difference noticeable in Forza Horizon 3 is the new dynamic lighting (global illumination) system. As you race through areas, you’ll notice the light reflects a sharp blinding mirrored reflection off of the water, while you’ll see an orange tint as you dash across the sands. Racing through the trees will give you lines of radiant sunlight, while you’ll notice buildings completely obscuring the sun in the metropolitan area of Surfer’s Paradise.

Multiplayer is even better in Forza Horizon 3 than it was in the previous years. Not only can you jump in and out fairly quickly to race against other players, but now you can play the entire game in co-op with your friends, making sure your racing experience is always optimal instead of feeling alone in the empty spaces. Then again, it’s hard to ever feel that way when you see the driveatars of your friends populate the streets and rounding out the ranks in your races.

Even though Horizon 3 has been out for a little while now, it’s still hard to recommend the PC version just yet. Turn 10 is working on making the graphics handle better with higher framerates, but the locked feeling of 30 FPS on the Xbox One is still the optimal experience despite how much prettier the PC version can be. This is a game I highly recommend picking up digitally so you can play on either platform. Forza Horizon 3 is easily my pick for the most “must-have” Xbox Play Anywhere title.

While I could go on and on about all the features in Forza Horizon 3, you’d get bored reading because you’d just be anxious to play. There’s a ton of races to run, jumps to make, streets to drive on, bucket list challenges to discover, points of interest to explore, billboards to smash, speed trap cameras to trigger, and that doesn’t even include some of the customizations.

For the first time, you get to customize what your avatar looks like so it’s a little easier to feel an attachment to your player character when they’re shown in the game. There’s also a billion customization options for the cars, including body kit pieces, paint designs to download from the community, and pretty much anything you can imagine. You can even replace the fantastic in-game radio stations with Xbox’s Groove Music if that’s your thing – though I’d prefer Spotify integration it’s a minor nitpick.

Seriously, Forza Horizon 3 is an absolute must-own experience if you’re into racing games. The gold standard of arcade racers just pushed the bar to the highest limits. The only downside is that you can’t get this game on PlayStation as well. Forza Horizon 3 makes the Xbox One (or Windows 10) worth owning – it’s absolutely stunning.

If you plan on gifting an iPhone or iPad, buy it now – Apple can’t keep up with demand