I’ve spent much more on much less. 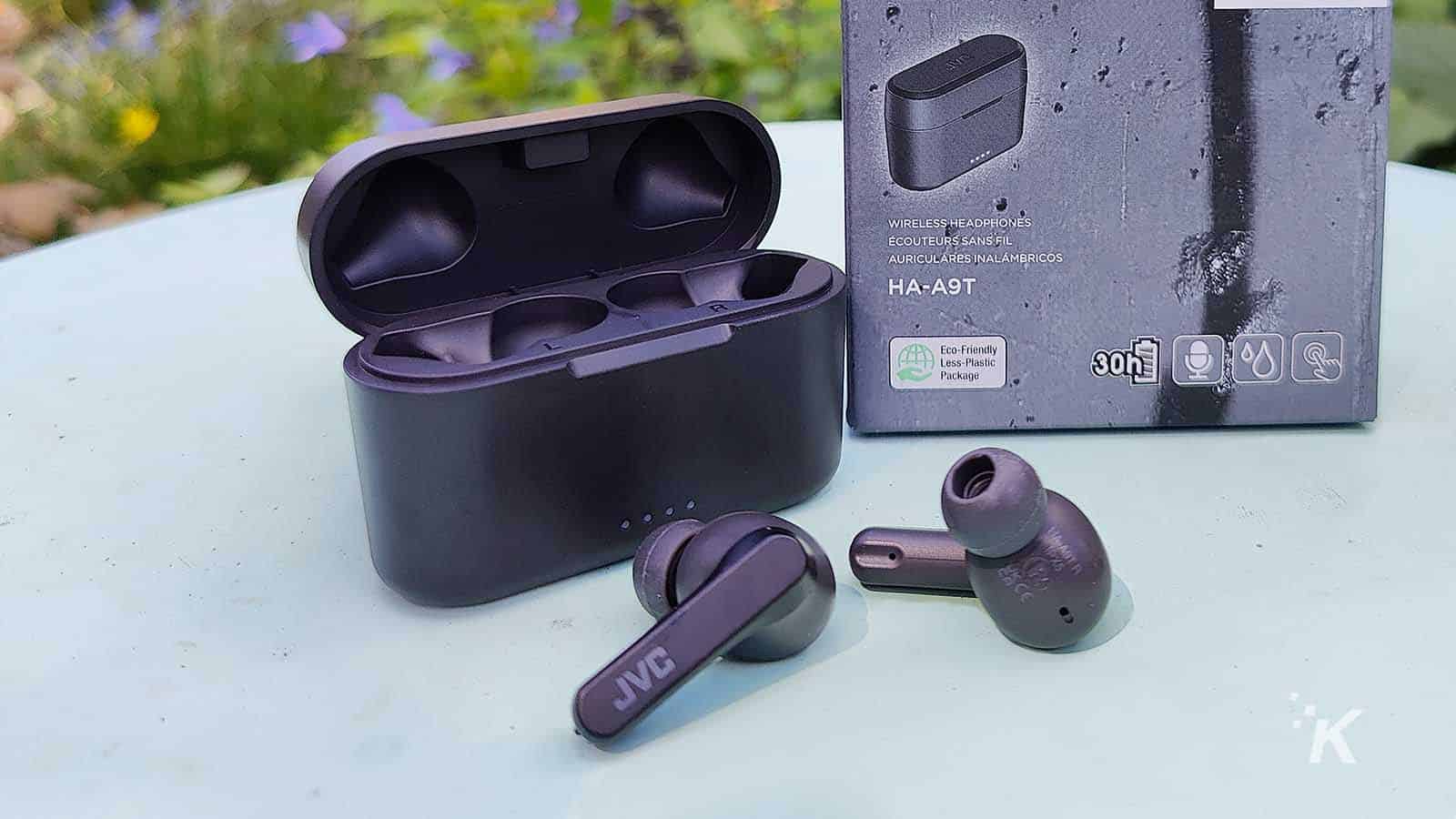 JVC has been a long-trusted brand of home and car A/V technology. If you didn’t have a Sony VCR back in the day, you probably had a JVC.

We know the brand, so when we put the JVC Riptidz earbuds in our ears, we know we are getting maximum effort.

No brand makes it out of the boom box era without honing its craft. Keeping that in mind, it’s not to say that JVC is a stodgy old brand. Obviously, it’s hip with the kids.

These earbuds are called “Riptidz” with a Z. That’s rad, bro. My ripped-up jorts approve. Do they sound as good as their implied street vibes?

Hell yeah they do. The JVC Riptidz are some of the best wireless earbuds I’ve had in my ears this decade. Sure, the decade is less than a year old, but I use a lot of different earbuds.

All the feelz with the JVC Riptidz

The JVC Riptidz aren’t groundbreaking when it comes to modern 21st-century design. These are what earbuds are now. They have changeable rubber ear thingies (ear gels, ear tips, whatever you want to call them).

They sit in the ear all snuggly without any pressure if you use the right size ear tip. They operate through touch controls as expected. With the ear tips, they stay in place through moderate activity. They’d probably fall out if you are engaging in pugilism.

As an in-ear type of earbud, noise isolation is acceptable. This comfortable fit creates a cavern of sound. They aren’t totally noise-canceling, but if you turn the volume up enough, they are. As I listen to everything at a solid 11, the outside world was a distant hum.

The nice thing about these earbuds is the auto connect feature. Once you remove them from the charging case, they automatically connect to your phone (assuming you’ve paired them already). There is a microphone for hands-free calling as well.

They are sweat and splashproof with an IPX5 rating. This means you can’t go swimming with them, but you can get caught in the rain walking the dogs. They take about 15 minutes to charge in the charging case.

This equates to about 90 minutes of play before recharge. This cycle can be repeated for around 30 hours before the charging case needs to be recharged. That’s enough for at least two international flights. Or queuing in line when Popeye’s drops a new chicken sandwich.

Bass is the best. What you look for in bass from Bluetooth headphones is crisp and clear delivery. I don’t want any distortion or crackling. I don’t want the bass to overwhelm the vocals or accompanying instruments.

Listening to Son Real’s “Can I get a witness”, the bass was clean and loud. There was no distortion on the heavier bits. While this isn’t the most bass-heavy track in existence, it’s a good litmus for overall bass performance. It’s not Basement Jaxx, but few headphones can handle that thump.

When the bass is not overwhelming, it allows the mids and vocals to shine. The Riptidz also smooth out high, normally piercing ranges like the guitars on “Out of the Black” by Royal Blood. Here, these ranges are sharp and driving but not blasting the speaker out of your ears with high distortion.

Bluetooth 5.1 has really revised my previous opinions on wireless music delivery. Where once the idea of wireless earbuds would make my stomach turn, now it’s just as reliable as wired headphones.

Bass has always been a marker of the quality of wireless delivery. There always seemed to be some fidelity loss. With the current standard of Bluetooth as evidenced on the JVC Riptidz, that loss is nonexistent. Or so minutely decipherable that it doesn’t matter.

Strong soundz from these earbuds

In order to really determine if an earbud is going to pass muster, there needs to be a superior depth of sound. Putting on “Hard Liquor” by SOHN and the Metropole Orkest, I was confronted with a fantastic depth of sound.

You can hear the freaking orchestral bass drum thumping between your skull. While you might not be able to mentally pin down every single instrument, the backing orchestra isn’t muddled together like it is with many car speakers.

What you want here is centered sound in your head. This is where you aren’t hearing a left and right, but it’s all in the middle. That’s what I got here, and I like it.

Consider “Look” by Venus Hum. This is a vocal-centric track with computer-generated music (for the most part). With these earbuds, it sounds like she’s singing all around you and, most importantly, in your head.

Electronic sounds don’t drown the vocals in high ranges. There isn’t that piercing ear drum destruction found with most headphones.

There aren’t really any negatives here with the Riptidz. The touch controls can be a bit sensitive perhaps. If you are listening to higher quality MP3 or FLAC files, you won’t find any issues with sub-$40 earbuds.

Streaming music comes with a slight loss of fidelity, but that’s on the service not the earbuds. If you need a new pair of earbuds and you don’t want to spend much, the Riptidz are perfect.

In addition to the Riptidz, JVC also sent along its basic JVC True Wireless Earbuds. Honestly, don’t bother with these. Unless you want to save $10 and don’t really care too much what the music sounds like.

These are classic earbuds that just sit in your ear. These are the types of earbuds you buy when you really don’t like music but you listen to it.

Everything that the Riptidz delivered, these ones come up short on. There is a serious lack of true bass (unless you hold them shoved in your ears). Depth of sound is a tin can in a rainstorm. Everything sounds a few yards away. Sure, you can hear music through them but it’s a hard meh.

These are just earbuds that exist. There is nothing special about them to be sure. They aren’t much more than what you’d find in the $5 bin at Walmart with subpar charging cables and knock-off pop sockets.

Alternatives and where to buy these JVC earbuds

If these JVC earbuds (especially the Riptidz) sound good, but you are looking for other options, the market is overflowing with them.

Considering these pairs are budget-friendly, you could look at something like the Anker Soundcore Life Dot 2. For gamers, these Logitech G earbuds are on a bunch of top-10 lists and are under $50.

If you want to splurge, however, the EarFun Free Pro 2 earbuds come in under $100 and feature active noise canceling.

Both the JVC true wireless earbuds (HA-A3T), and the HA-A9T (Riptidz) offer Bluetooth 5.1, auto-on and connect, and Quick Charge. The latter provides 90 minutes of playback from a 15-minute charge.

They retail for a moderate $24.95 and $39.95, respectively. You can get the Riptidz from Amazon and Walmart. The cheaper JVC earbuds can be found on Amazon and Best Buy.