All the pretty visuals and melancholy music might make this one a fun game to look at and hear, but that’s where the charm stops. 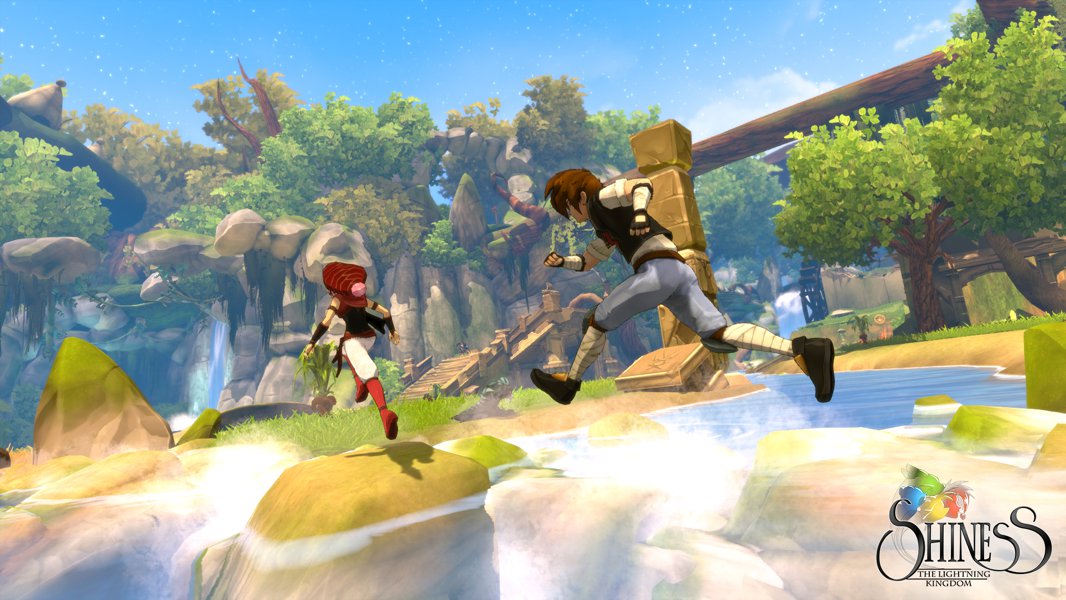 I first saw Shiness: The Lightning Kingdom in a quick over the shoulder glance at Focus Home Interactive’s E3 booth last year. While I didn’t know anything about it, the super bright and colorful art style reminded me of other gorgeously hand-drawn looking games like Ni-No Kuni: Wrath of the White Witch, the Tales games, and other contenders in the JRPG ilk. Finally getting a chance to put my hands on it, I found some interesting ideas but unfortunately, they’re not quite as fleshed out as they needed to be.

Shiness: The Lightning Kingdom is an RPG at its core. You play in the land of – actually, screw it. None of this part is important because the story is painfully dull. As much as I tried to care, I just couldn’t because there wasn’t much of a reason to care about the characters. Chado is basically the Goku of this world and serious but cool, though I found myself far more charmed by the attempt at comic relief in Poky, a chubby – whatever these anthropomorphic humanoid things called Waki actually are. I think they’re some sort of dog bunny hybrid or something.

This game clearly aims to cater to those who enjoy wearing fursuits, and unfortunately, that’s not my thing. Not only is the story bland and forgettable, the characters speak English in some of the cutscenes, what sounds like it could be Japanese at times in the gameplay, and they all have some form of silly over-exaggeration for body language when having conversations – yet none of them have any sort of talking animation which only further detracts the player from becoming immersed in the story.

It’s a shame that there’s not much value in the story because the world is absolutely gorgeous both in design and execution. The colors are vibrant and crisp, the environments feel lush and fleshed out, and seeing enemies moving before jumping into a battle is a nice touch. To say that the developers of Shiness slacked on the visual presentation would be an understatement, as this game looks better than a lot of the downloadable titles that big name studios produce. The soundtrack is also the star of the show, as Shiness has an absolutely terrific score.

Where Shiness: The Lightning Kingdom really runs into trouble is with the amount of things it wants to do without any real focus. In situations like this where the game itself has a fairly weak story, gameplay should enhance the terrific visuals and the fantastic soundtrack – but it doesn’t.

Shiness is an Action/Adventure game, with RPG elements. The best game I can compare it to is Skylanders because Skylanders has a pretty lackluster story – though it did get better as they continued making games – the core gameplay was tight and fun (even when the platforming suffered), while Shiness lacks the proper polish to keep the good from outweighing the flaws. I won’t say bad because that’s a little bit unfair – but, a lot of the multifaceted elements of this game feel either rushed or simply mishandled. Platforming is almost atrocious because the game does a terrible job of delivering a proper feeling of depth perception. This is most noticeable when throwing one of Chado’s rocks to activate a series of switches that must be pressed simultaneously, when in execution, swapping between two active characters would have been far easier and, frankly, more fitting for this type of game.

Shiness is a clever game – combat becomes a loosely based arena battle system. If you’ve played Dragonball Xenoverse (see why I mentioned Goku earlier?) or any of the recent batch of Namco Bandai’s anime fighters, combat feels very similar. There are basic punch and attack buttons, a dodge roll, a parry, and through the use of equipped discipline scrolls a magic system that should be easy to use but is ultimately far too convoluted to feel natural.

As you use spells, they are aligned to color – so like water uses blue while fire uses red. When you cast spells, it takes X amount of your stored magic and once you’re out of magic, you have to wait for the forcefield that surrounds the arena to change to the color you need in order to hold a stance which allows you to absorb the magic power in. This leaves you completely vulnerable to attacking enemies, and ultimately means you’re likely going to do your best to ignore the magic and spam your melee strikes and pray for parries to power through battles.

That would work, except you wind up fighting enemies that would take all day to kill while blocking and trying to land a parry in this game is like trying to pull a Daigo Umehara at EVO 2004. To put that in simpler terms, parries require almost frame perfect timing and that’s far too demanding for a game like this – to the point where it feels like everything you do is a feat of pure luck. From landing that platforming jump to parrying an enemy, none of it feels like it fundamentally works, but you’re just thankful for it when it finally does.

The sad thing is, you can forgive a game with a weak story if the gameplay is superb. You can forgive a game that is lacking mechanically if it’s at least fun, but Shiness quickly loses the wonder of being adventurous in design and becomes frustrating and boring to slog through.

It isn’t a terribly hard game, but if you’re a completionist, you’re going to be super irritated at how easily you can die – especially once you realize there’s an achievement for completing the game without getting a “game over”.

All the pretty visuals and melancholy music might make this one a fun game to look at and hear, but that’s where the charm stops. Hopefully, Shiness receives some quality of life patches, cause right now I can’t recommend this game at all – at least not on the PS4. I’ve heard the Steam version runs pretty well, so perhaps maybe check it out there instead.