Soundcast has managed to make a winner here, with a small Bluetooth speaker that puts out a fairly balanced sound signature across the range. 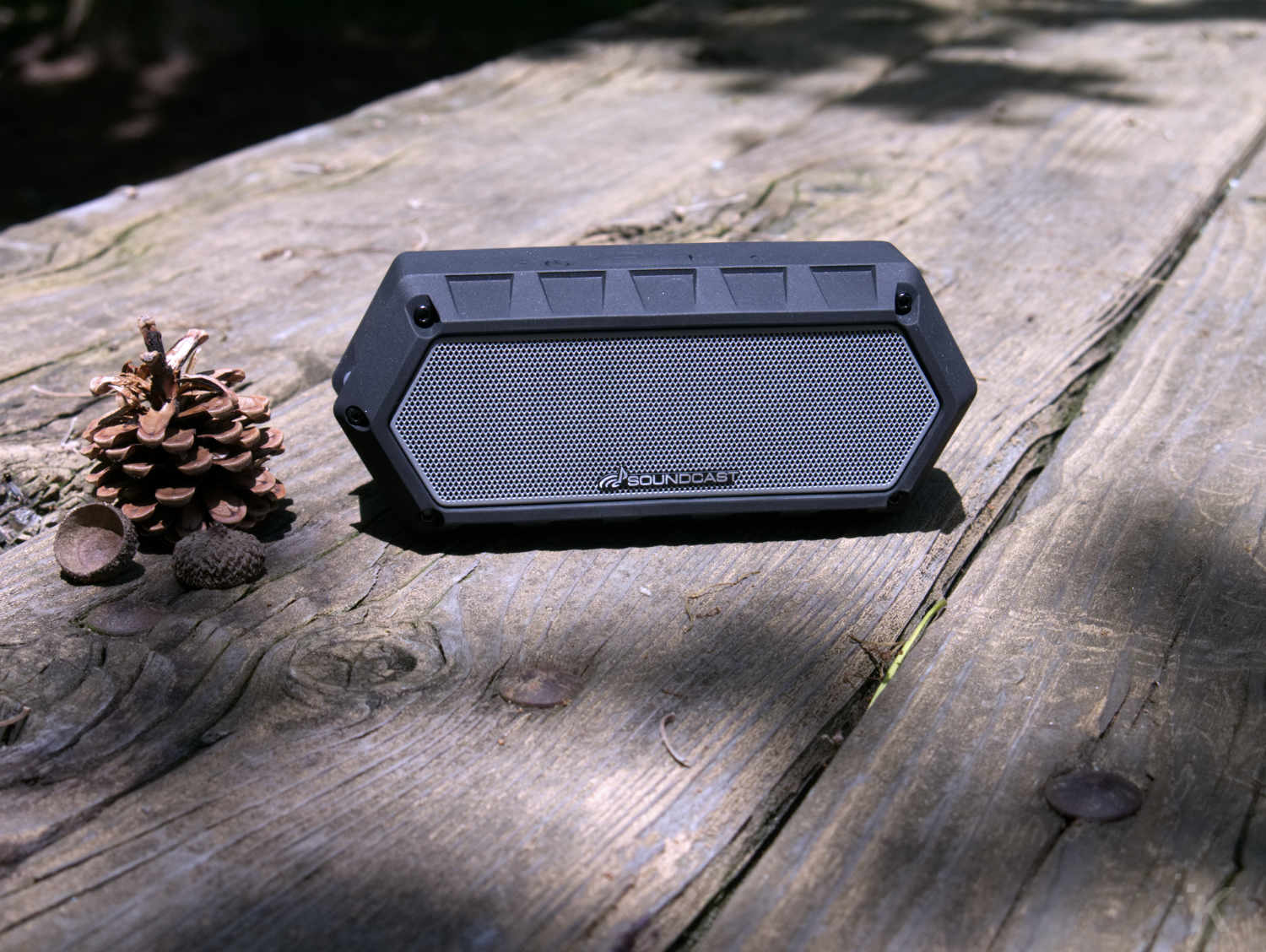 Summer is here and that means sun, sand, and BBQs. That also means music, whether live or supplied via portable music players. Gone are the days when you needed to drive your truck down to the beach to get portable sound, nowadays you can slip a Bluetooth speaker right in your pocket. Soundcast has built their name on powerful outdoors speakers that you can take anywhere, and the latest model the VG1 is no exception. It’s small, it’s rugged and it’s waterproof to IP67, but how does it sound?

Soundcast has a bunch of illustrations on the fold-down box art to show the versatility of the VG1. Inside, there’s some foam protecting the speaker for transit. There’s also a 3.5mm cable for aux-in duties, a micro-USB cable for charging, a lanyard for the speaker and a sturdy pouch to save and transport the cables when not in use. 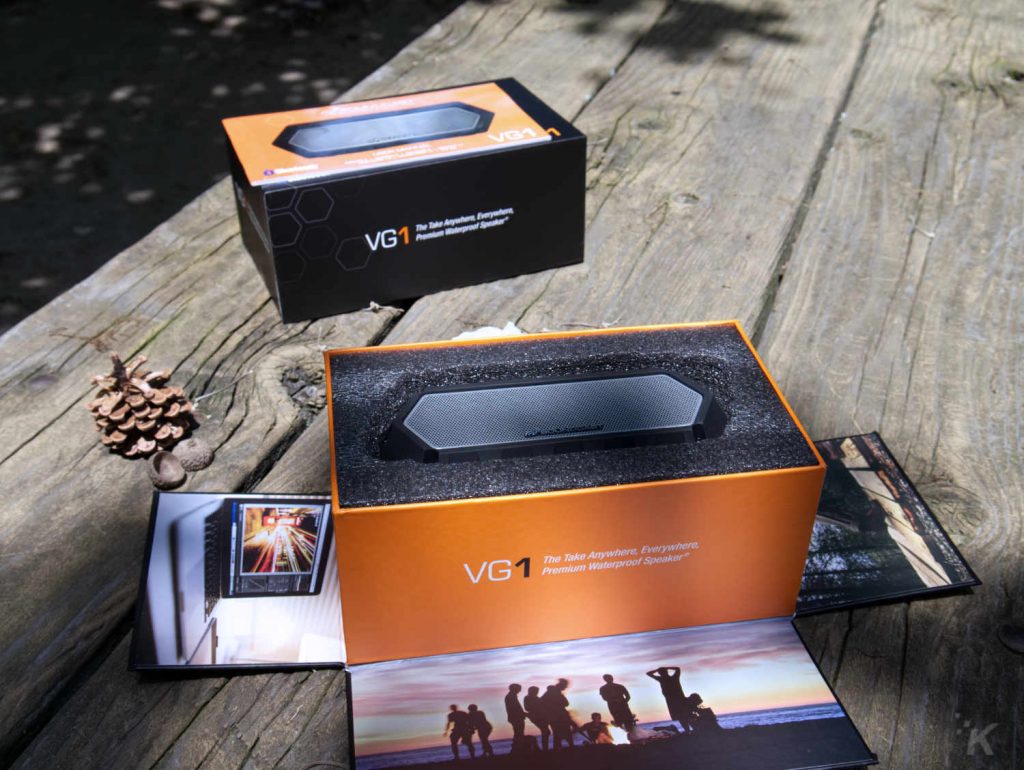 With Soundcast stressing the ‘take anywhere” mantra for the VG1, it’s good to see an IP67 waterproof rating on the speaker. That means that it’s capable of being fully-submerged in water for up to 30 minutes at a 1m depth. That’s the upper limit of the rating, but in practice, it means you don’t need to worry about the speaker in rain, at the pool or around the tub. Soundcast’s speakers have long been associated with the beach, so it should be fine for most use there – although submerging in salt water will likely wreck the speaker as salt gets everywhere.

It’s also built to be shockproof, Soundcast have designed the VG1 with a rubberized body that’s everywhere but the speaker grilles. Those grills cover dual-cone aluminum drivers and a passive bass radiator to add low-end, something that Bluetooth speakers have struggled with. With sound coming out of both grilles, it’s also able to spread sound over a wide area in all directions.

The beveled edges allow you to angle the speaker up slightly for better projection of sound if you need it. On top, there are controls for Power/pairing, Vol -/+ and Play/Pause. There are no track skip/repeat buttons, so you’ll have to use the ones on your paired device to do those functions. Play/pause also doubles as a phone button to take calls or to invoke Siri if you’re paired to an iOS device.

On the right side, there’s a small rubberized housing for the micro-USB port and two aux-In jacks. The VG1 has a party trick with the second one, you can daisy-chain them together to turn them into true stereo sound. You can also pair two with Bluetooth to do the same thing, something that we weren’t able to test.

Portishead’s Sour Times stretches the speaker to its limits, with both sweeping highs and deep melodic bass. Even with this, it performs admirably with Beth Gibbon’s haunting vocals distinct and reproduced faithfully. There’s some distortion and clipping of the low end of the spectrum when turned up to full, but with enough volume to fill my apartment at 50-percent you might not need to turn it up that far.

In Eric Clapton’s Layla, a track with less bass, the sound signature of the VG1 shines. Even at full volume, there’s no distortion and every instrument is distinct and harmonious. This little speaker punches way above its weight class.

Aphrodite’s remix of Luniz’ I got 5 on it comes in strong with the lows that west coast hip-hop is known for, without much distortion even at full volume. Bass performance also depends on what surface the VG1 is on, with more thump on a desk than on the grass, for example.

In Vivaldi’s seminal Four Seasons movement ‘Winter,’ the high-energy higher register strings are crisp with an impressive clarity of tone from such small drivers. With no need to worry about bass distortion, the VG1 performed fantastically all the way across the volume range.

It’s only a few years ago that Bluetooth and small speakers were novelties devoid of acoustic performance and I’m impressed with how far they’ve come. Soundcast has managed to make a winner here, with a small speaker that puts out a fairly balanced sound signature across the range.

Sure, there’s some minor distortion at top volumes on bass-heavy tracks and some of the highs can get a little sibilant but overall it’s a great sounding speaker. I’ve found myself using it more than my separates system at home, it’s nice to be able to take it between rooms easily. Add to the mix that it’s rugged and water-resistant, and the VG1 deserves to be on your radar.