A familiar fantasy story wrapped in an interesting battle system. 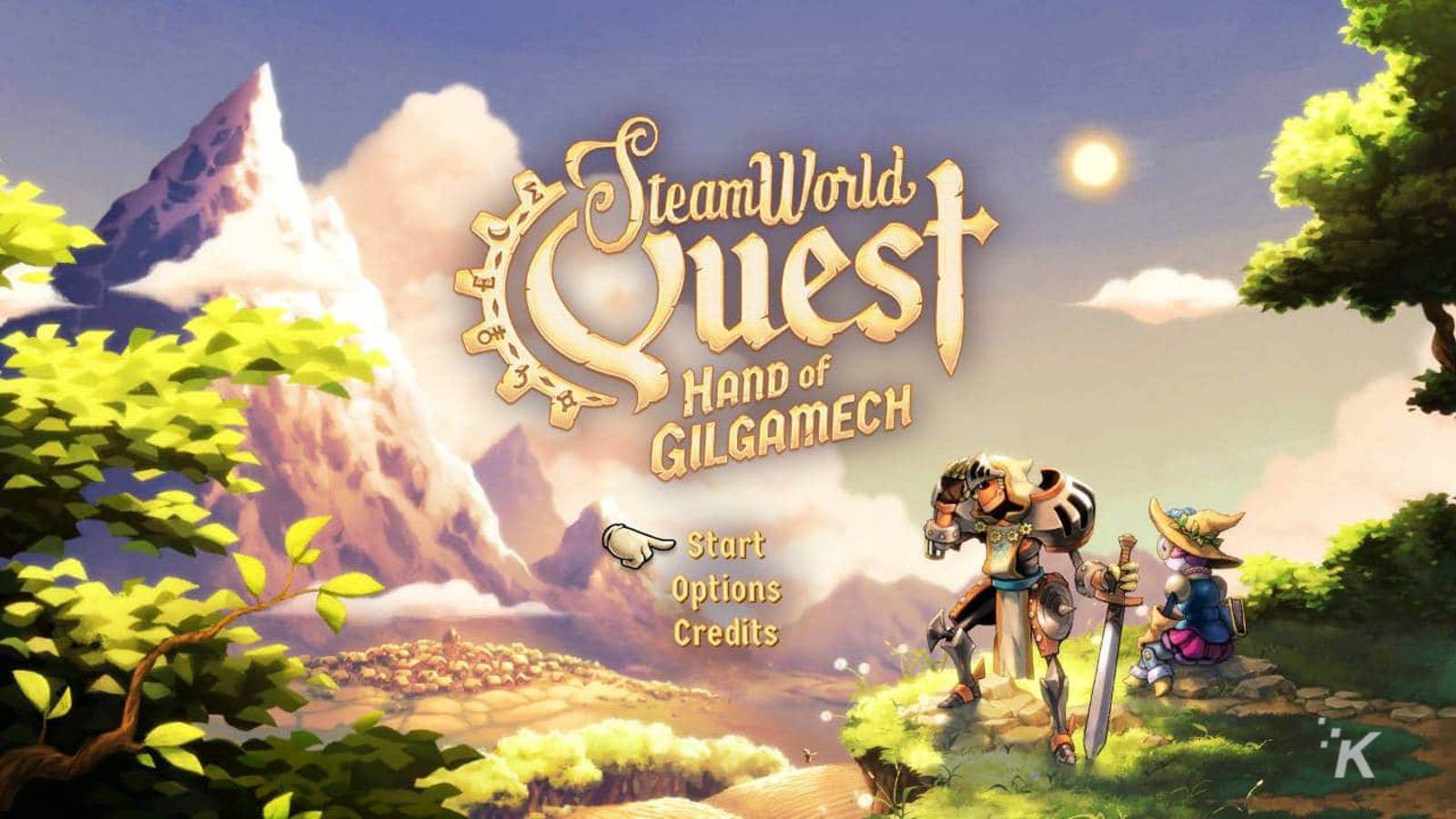 Stop me if you’ve heard this one before: A mysterious army ransacks a small town in the process of world domination, leaving the usual heroes out of the picture and sending our rag-tag band of misfit adventurers on a quest to save the day and discover the deeper, sinister truth of what’s really going on.

It’s a familiar setup to anyone who’s played a fantasy game or read a fantasy book, really. In fact, you could probably construct the general skeleton of the story by mashing TV tropes together with MadLibs. But that’s the point, right?

If you’re making an entry into a well-known genre, you have to start somewhere familiar and lead your players somewhere new. SteamWorld Quest: Hand of Gilgamech is the latest game by SteamWorld franchise developer Image & Form Games and it does what all SteamWorld games do: brings something new and wonderful to a genre you already know and love.

Mechanically, SteamWorld Quest is a turn-based RPG where you control a party of three heroes at a time on their quest to save the day from the nefarious Void Army 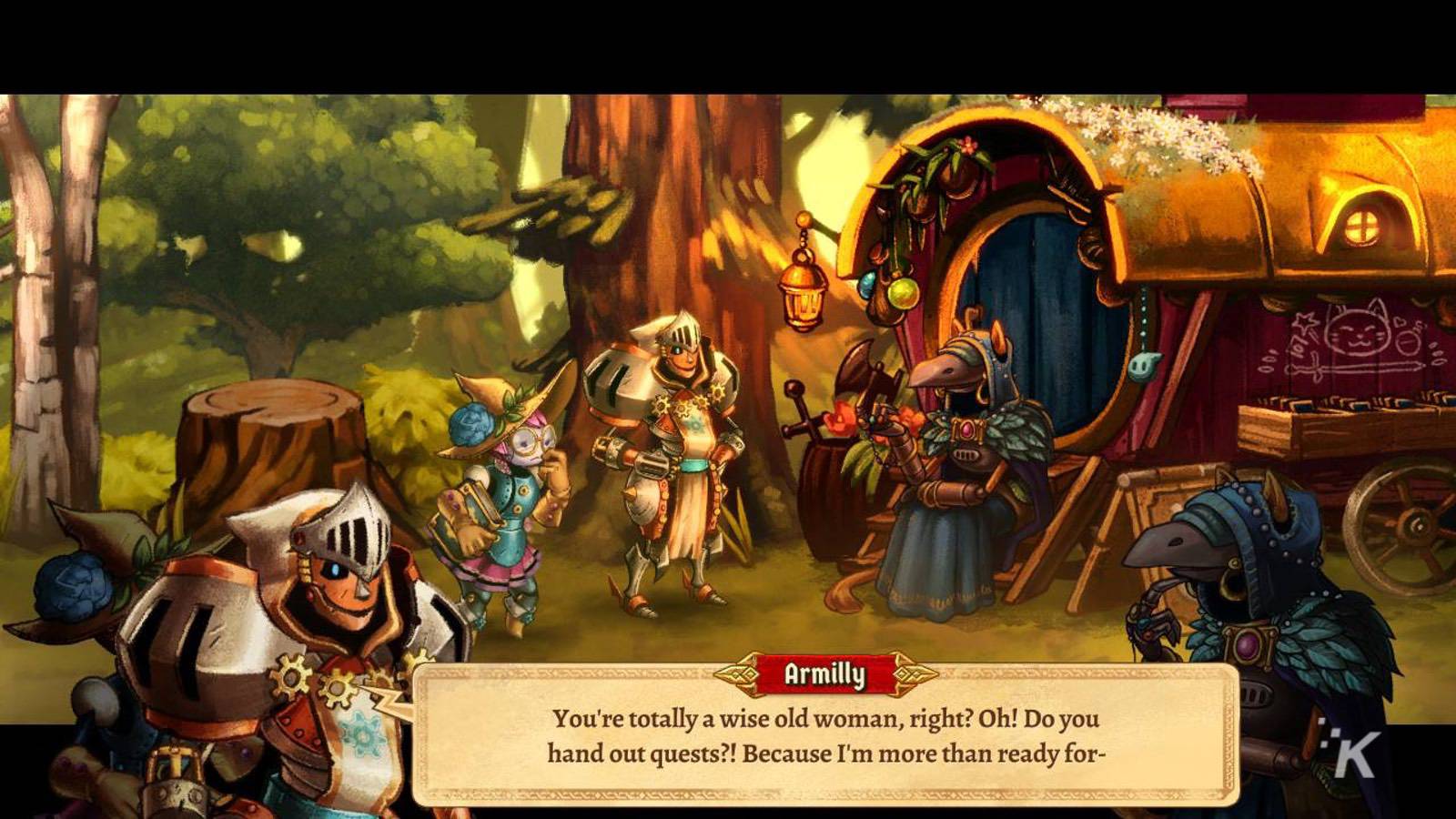 However, it doesn’t play exactly like any other RPG I’ve ever played. Instead of having on-demand abilities or resource pools like mana or stamina, it plays like a deck builder. Each character has a fully customizable deck of 8 cards with their abilities on them, which consist of steam-generating abilities and steam-expending abilities, you have 6 cards in your hand at a time, and you play 3 cards per turn.

Over time you get more and more cards of increasing complexity, utility, and power and it’s up to you which party members to use, which cards to include in their deck, which cards to buy, on and on and on. I was hooked instantly. 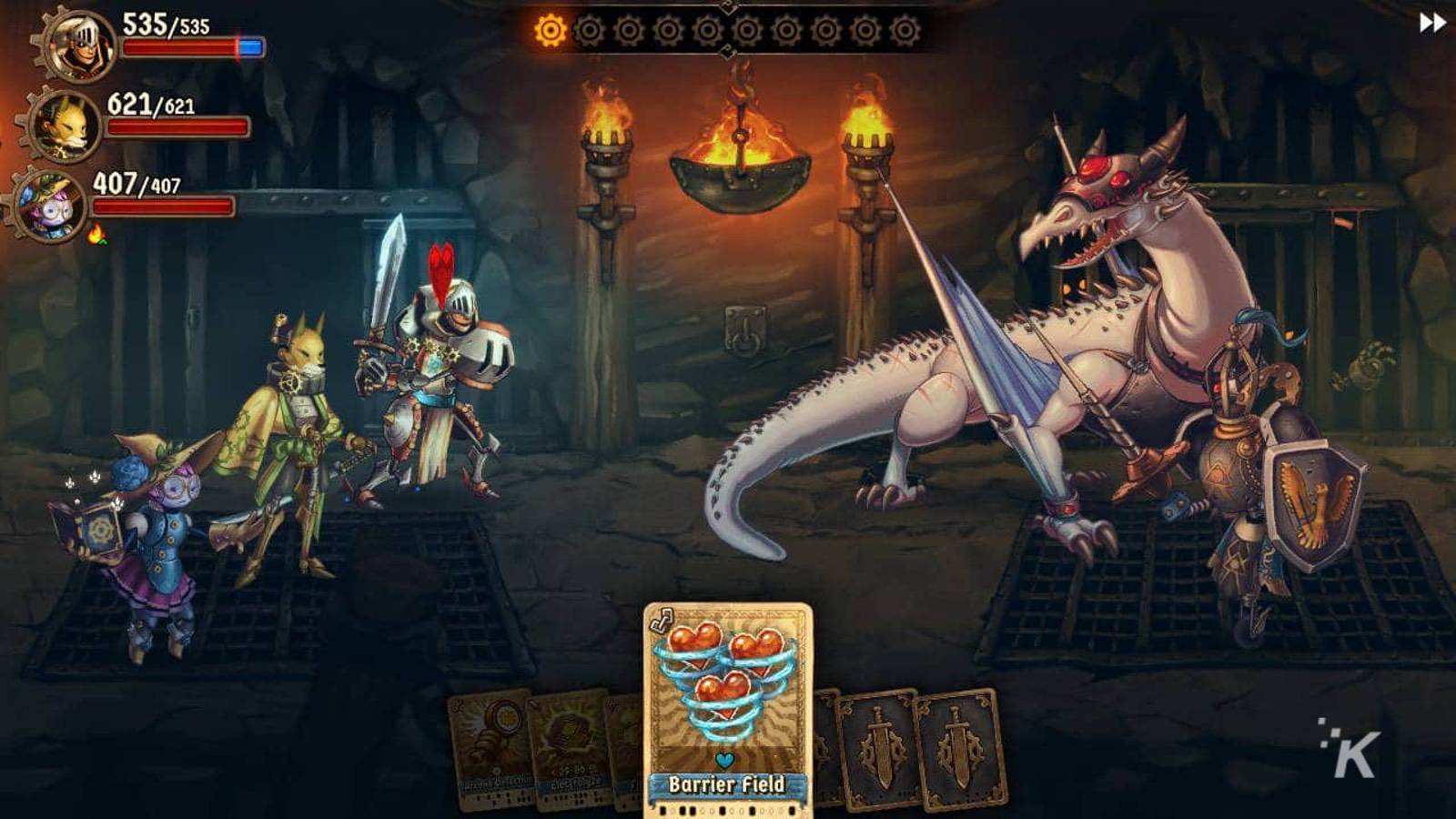 Spoilers, you fight the game’s main antagonist repeatedly. Sometimes he has a dragon with him. (Image: Jacob Vander Ende / KnowTechie)

Oh, did I mention that twice per turn you can discard a card to draw a new one? Or that if you play three cards by the same hero in one turn, it activates a special chain ability for free, a chain ability you can also customize by changing that character’s weapon?

All of this plays out in a way where you never have the perfect turn where you get to use everything you want to use, but you’re instead left to make improvisational decisions in the heat of battle non-stop. It is an incredibly creative system that puts the “load up on quadra cut and just deal 9,999 damage over and over again” systems of yore to shame.

Don’t get me wrong; I love making a broken-ass pseudo ninja-knight that dual wields Excalibur and Save The Queen while moving across half the map every turn and attacking 2-3 times for every action the enemy gets, but SteamWorld Quest isn’t that game and it’s a breath of fresh air for it. 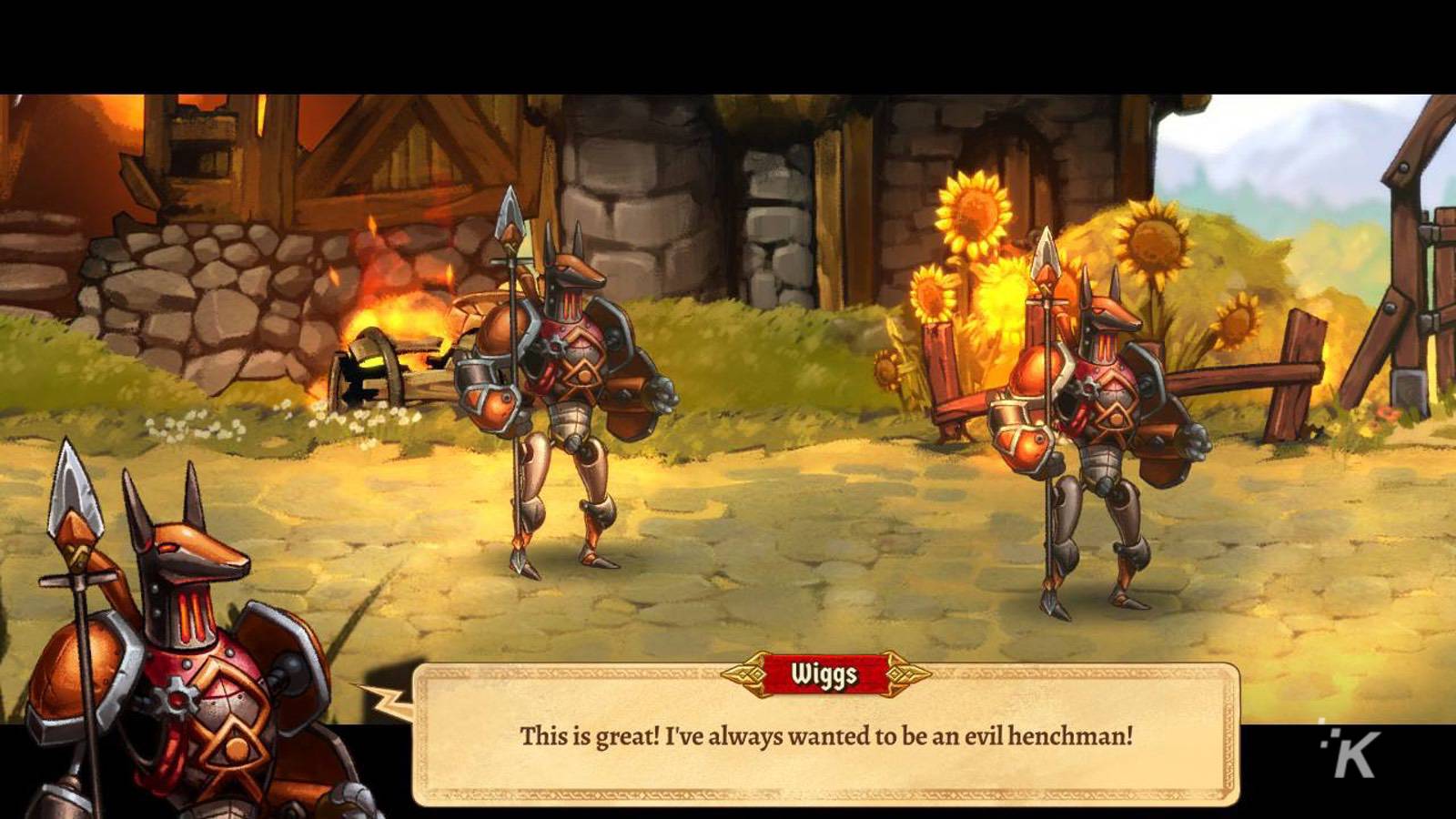 The wrapping around this wonderful battle system is pretty great, too. Even as I’m writing this, I have the game’s catchy soundtrack in my head, which ranges from exciting orchestral fantasy to the epic ensemble plus electric guitar that you’d expect from boss fights. The visuals are crisp and vibrant. The writing is on-point, too; I feel for our heroine Armilly’s quest to find a place for herself in the world, Galleo’s desire to just avoid anything difficult in life, and Copernica’s oscillation between manic curiosity and skeptical consternation.

The story isn’t earth-shattering, but it’s a pleasant popcorn journey that’s a fair mix between comfortable and fresh. SteamWorld Quest has a lot of personality and it shows in every aspect of the presentation. 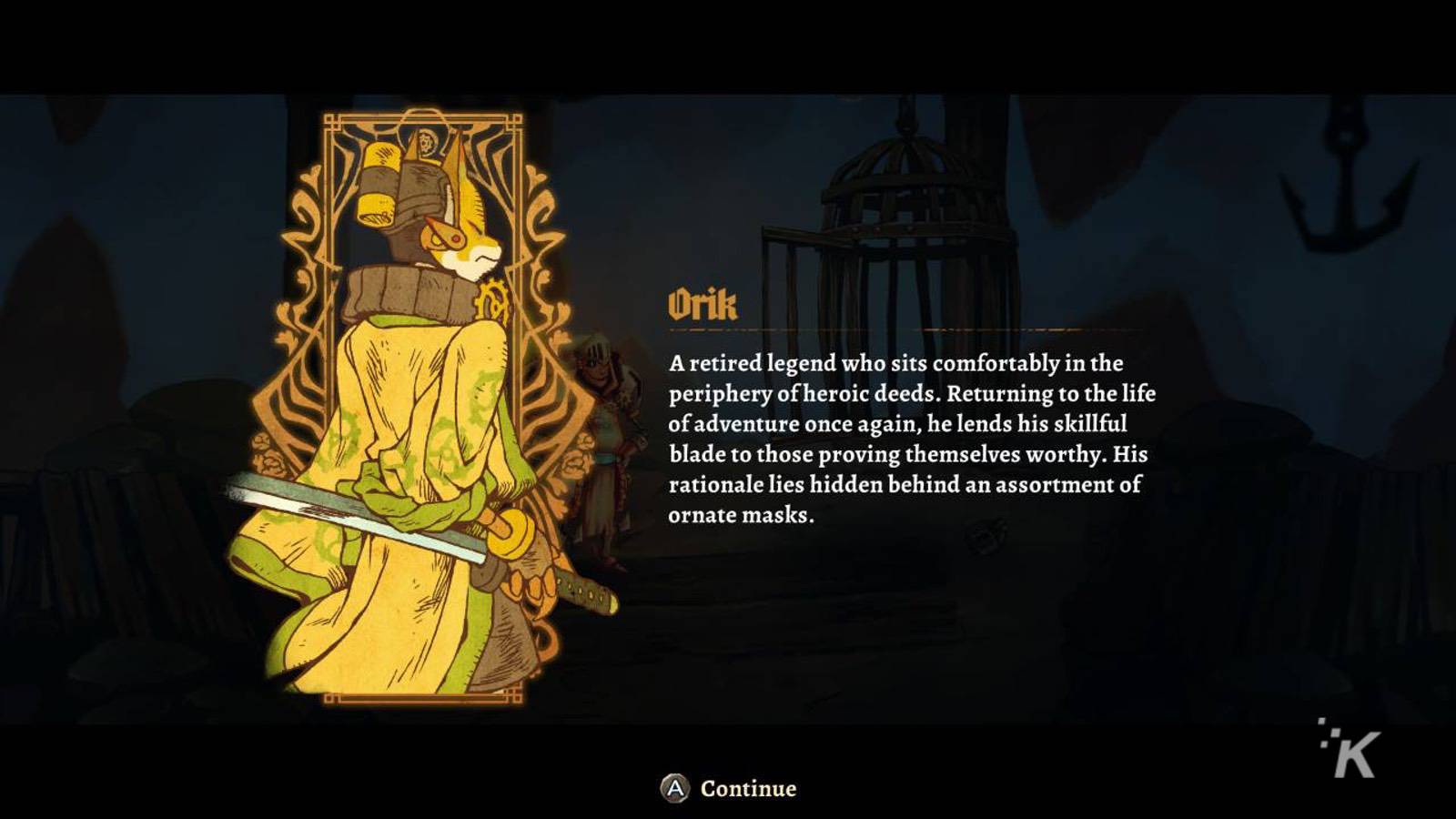 You had me at “Robot Fox Samurai” (Image: Jacob Vander Ende / KnowTechie)

My gripes with the game are minor, really, which should give you an idea of where this review is going

The first irritant I came up against is that while the game tells you what percent of the treasure you’ve gotten from a chapter and it gives you the option to replay the chapter to get what you missed, that process is tedious and frustrating. You have to actually replay the entire chapter, including all of the fights along the way and the boss.

This also includes watching every cutscene again and you can only skip parts of the cutscenes; the dialogue is skippable but the actual movement of characters around the screen is not, so some scenes are just agonizingly slow when you already know what happens. I suppose this is better than repeated points of no return where you just permanently miss things, but I would’ve liked to see the process be a bit more streamlined and painless.

Beyond that, I sometimes found that SteamWorld Quest leaned a bit too hard into familiarity. For example, Armilly is our lead character and she’s a physical damage dealer. Her deck includes cards like Heroic Strike, Intercept, Execute, Cleave, Fury, and Shout.

I swear to you I am reading from Armilly’s kit, not the introductory guide to playing a Warrior in World of Warcraft, in which you can find literally all of those abilities and they all work the same way, right down to Intercept stunning enemies and Execute dealing additional damage when an enemy is severely wounded.

The implementation is of course wildly different, with this essentially being a card game and World of Warcraft being an MMO that originally came out 15 years ago, but still! This doesn’t actually affect the gameplay in any way, but I do feel like it’s important to talk about. 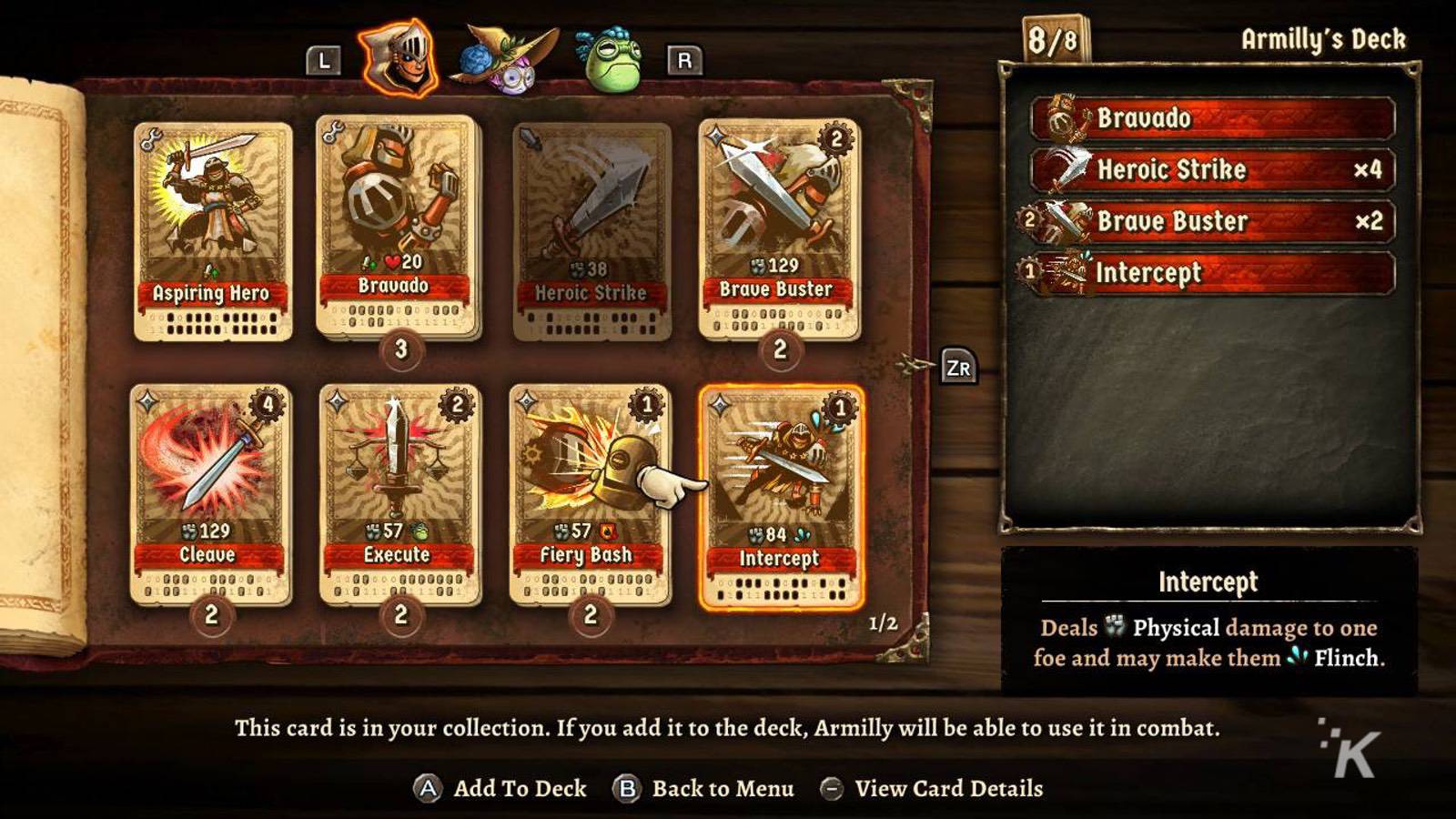 Lastly, and this one is actually extremely minor despite how many words I’m about to dedicate to it, I found that I was doing too much quick, mental math. Here’s an example. Ready? Think fast: Braver Buster costs 2 steam and deals 340% STR damage and Cyclone Slash costs X steam (consuming all of it) and deals 40% STR twice, then hits two additional times for each steam spent. At which steam breakpoint is Cyclone Slash better? Oh, also the characters that use these abilities have different STR values.

READY, GO. …No? This isn’t a theoretical problem, either: You might literally have both cards in your hand and you need to know which to play. Image & Form could have included a feature where hovering over a card showed the actual expected damage output, but they did not (this only exists for simple damage values, so Brave Buster but only the base damage of Cyclone Slash).

I personally do napkin math pretty quickly (the answer is 4 steam, making Brave Buster stronger in all scenarios except when your steam bar is overflowing and you need to dump it) but this might become mentally taxing for some and I can totally understand why.

On the whole, I think SteamWorld Quest: Hand of Gilgamech is an incredibly welcome breath of fresh air in a genre I grew up loving and eventually got tired of

It’s an RPG I have time for and one that engages me turn after turn after turn, constantly pushing me to get that next piece of equipment, that next card, that next fiddly bit to mess around with my team and deck compositions just a little bit more, just to eke out that last bit of power and utility for that next big fight. If you’re looking for a new RPG to quench your thirst or if you grew out of the genre and wanted something that might pull you back in, this game’s for you. I really can’t recommend it enough.

Now if you’ll excuse me, I’ve got some more cards to craft.

Jake reviewed SteamWorld Quest: Hand of Gilgamech with a review code provided by the developer. The hardest part about writing this review was putting the game down for long enough to do so. Unlike Persona 5, which he’s 85 hours deep in without having even met the entire player party, this one ends eventually. Check out our in-depth Scoring Guide.