It’s like a lame Transformer, but at least it is useful. 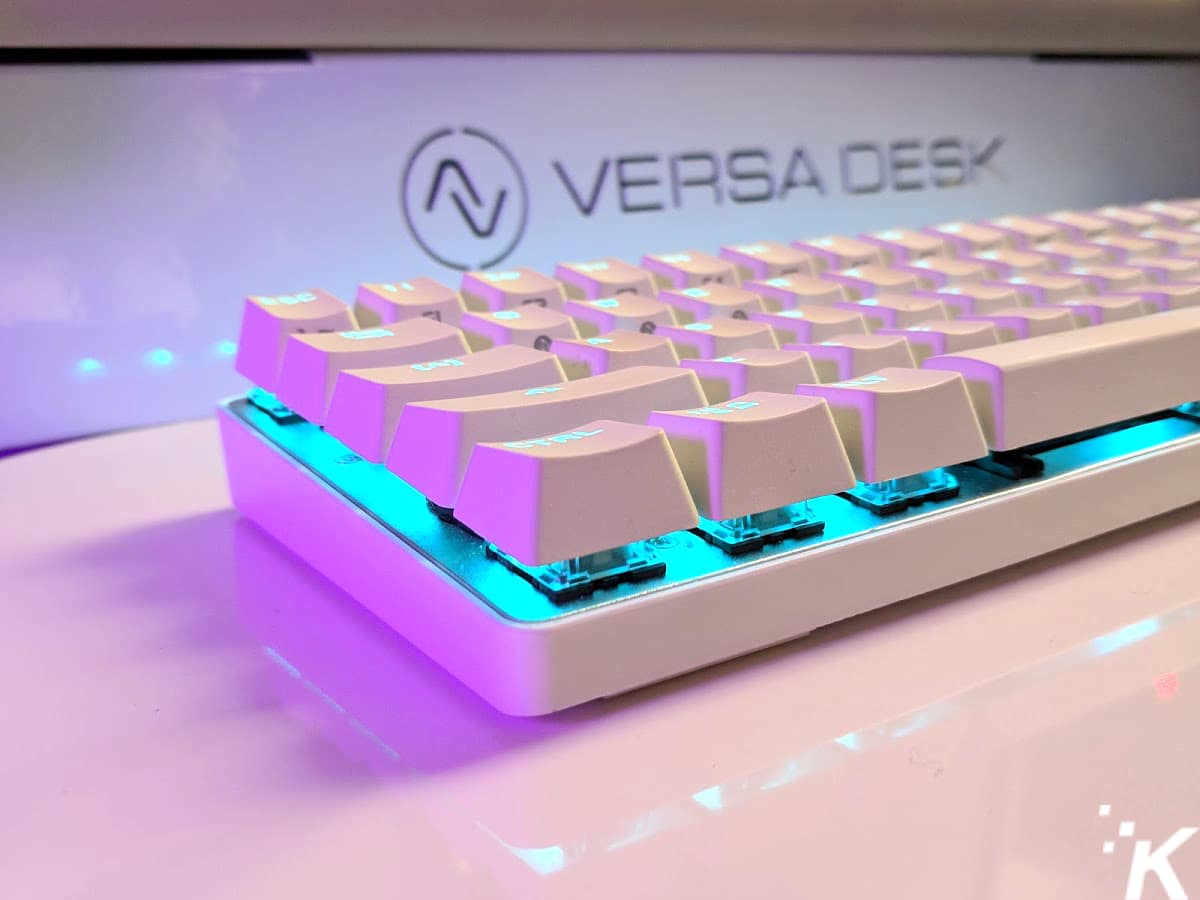 Sitting is the new smoking. Okay, maybe that’s pushing the metaphor a little too far, but for real, it’s becoming an issue.

There’s been a lot of talk about the health issues that can come from living a sedentary life. One of the ways we can combat these issues is by changing our posture throughout the day, and moving around.

Enter the sit-stand riser, which can convert a stationary desk into an adjustable-height desk so we can use it either standing up or sitting down. Today, we’ll be looking at one from Versadesk who bill themselves as the creator of the original push-button electric sit-to-stand desk riser.

The company have been around since 2000, and produce a full range of both sit-to-stand desks, converting risers and accessories such as monitor stands. They design and assemble all their products from their headquarters in LA.

The Versadesk riser came in a sturdy cardboard box with a carrying handle which I was very glad to see. It tipped the scales at 54lbs, which indicated to me that it’s likely to be made from sturdy materials.

Opening it up, the mostly-pre-assembled riser was cushioned with layers of strong cardboard so it couldn’t move in transit. The Versadesk that I was sent was all-white and arrived with no scratches, scuffs or dings on the hardware, there were a couple of areas where the glue from the edge molding had squirted up but a quick wipe with a cloth and it was gone. All good stuff so far, with it getting to me unscathed by the whims of the carrier. 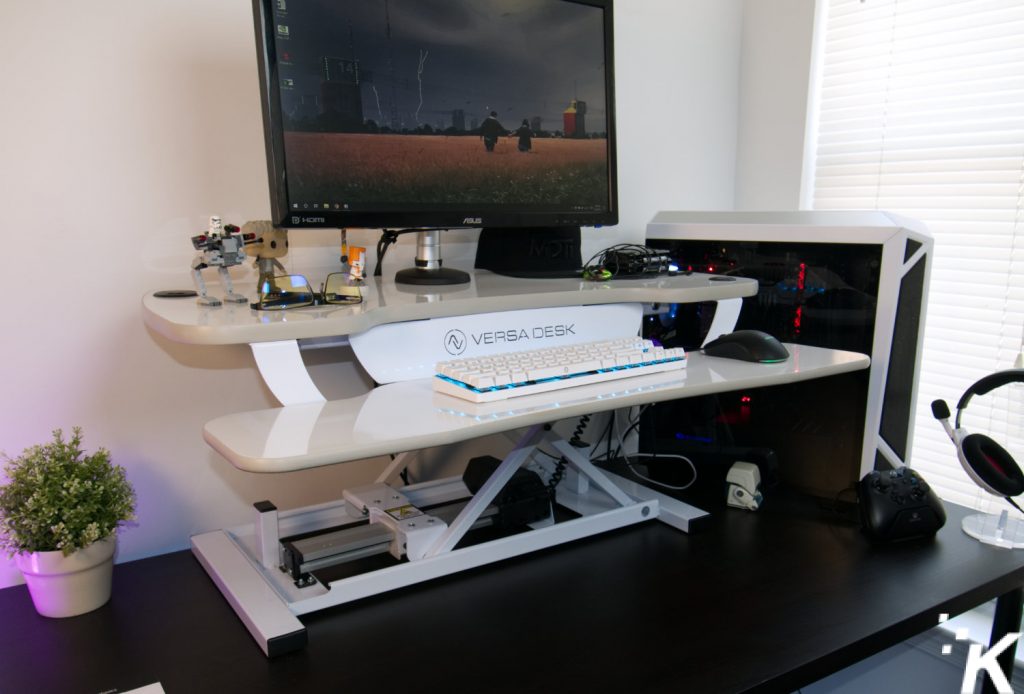 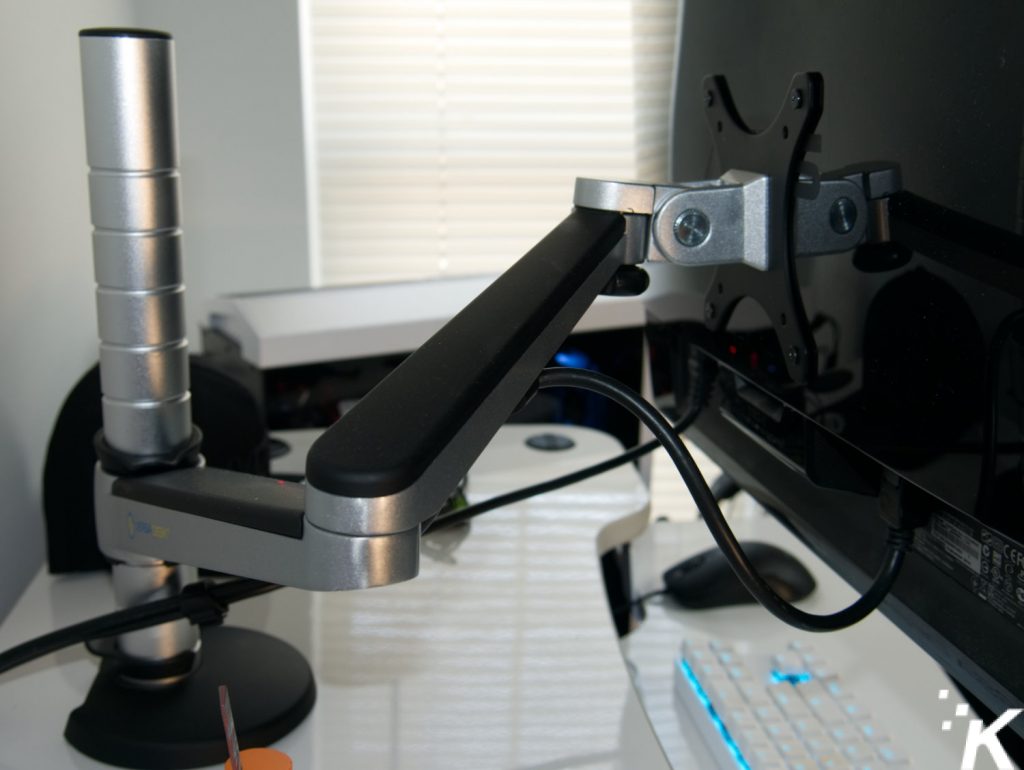 Setup for the riser was a breeze after I lifted it out of the box. Plonk it on your desk, plug it in so you can press the button to raise the work area and bolt on the keyboard tray.

The monitor mount that Versadesk sent along for review was also just as easy. Pop off one of the 3 grommets, put the mounting pole through it and screw on the securing nut. Then unscrew the four VESA mount screws from your monitor, swap out for the mount provided and refasten. Then it’s a simple case of using a thumbscrew to connect the monitor mount to the arm. It’s sturdy, and I found it easy to adjust for my viewing position. It does have some cable management mounts, which keeps everything looking tidy. If your monitor doesn’t have the longest power cord you’ll want to invest in a longer one, as it will cause some issues when the riser is in the standing position.

Really, setup was a breeze and I really like that there are 3 pre-cut grommet holes for either cable management or monitor stands. 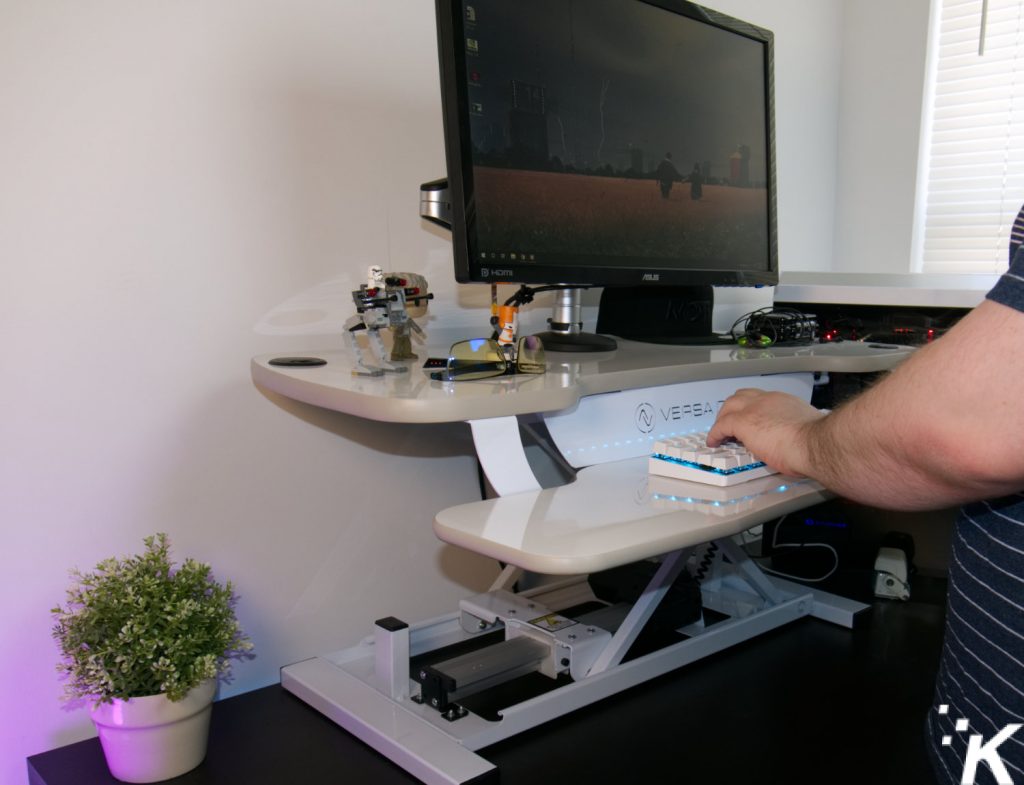 I’ve been using the riser for a few weeks now and I’m enjoying the break in monotony from only sitting down. I can’t say I’ve seen any physical benefits yet, but it’s still early days. I have been more productive recently, possibly from moving my posture around.

Everything feels sturdy and stays sturdy even when extended. Because the riser goes straight up rather than in a z-motion, it doesn’t change the space on the desk it occupies, which I like. Having to move backward while raising hardware doesn’t appeal to me at all.

There’s a small amount of ‘bounce’ while typing, interestingly enough it’s more pronounced while the riser is at the lowest point. This isn’t much of an issue, and I’ve learned to type slightly softer so it doesn’t happen. It might have something to do with the two parts of the frame that physically stop the riser going too far down, which also angles the riser slightly.

The keyboard tray is nice and wide, but it could do with more surface area where your mouse would go. Unless you’re using a wireless mouse, the cord will hit the mounting hardware and limit your movement. There’s plenty of space for most keyboards, but users of larger ergonomic keyboards might struggle.

The 2 amp, 55W motor that’s used is powerful enough to lift up to 80lbs of equipment, and it handled my significantly lighter monitor with aplomb. Versadesk doesn’t have collision avoidance when using the motor, which is one of the reasons that it tilts forward slightly at the lowest position – the motor just doesn’t stop immediately. There are also quite a few pinch points on the unit, thankfully there are warning labels on them.

These aren’t huge areas of concern for most users in an office setting but are worth paying attention to if you’re using the riser in a home office which might have children around. 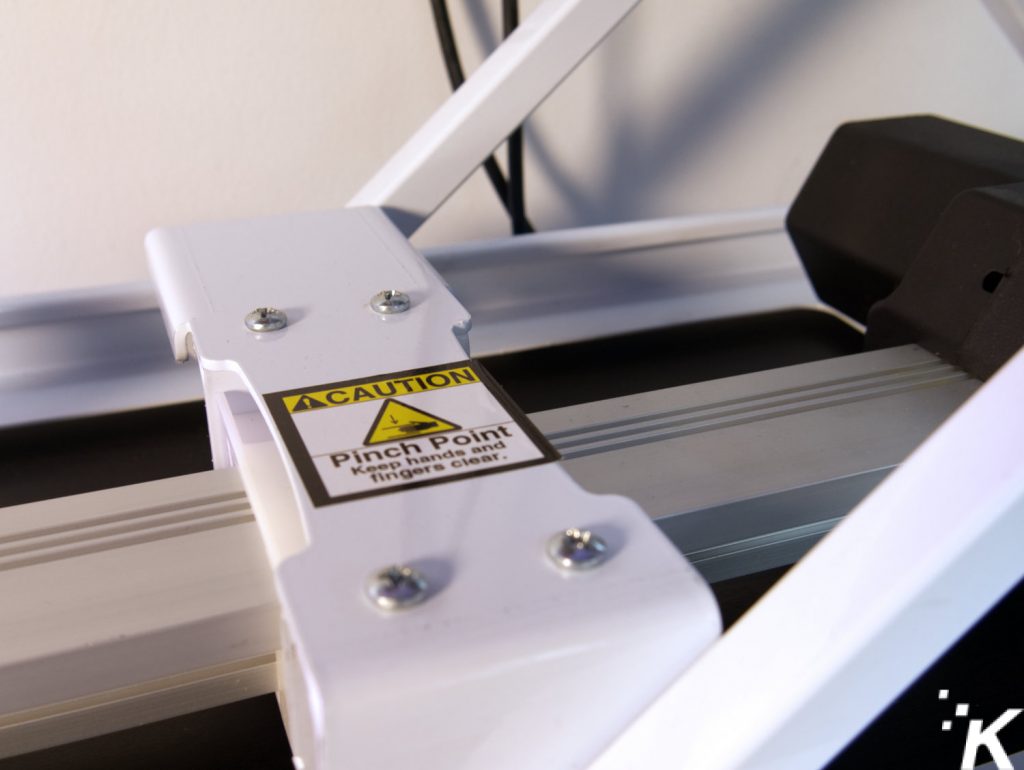 There’s a lot to like here on the Versadesk Power Pro, with only minor issues for most users. I like that it is essentially assembled when you receive it, that it has handy grommets for monitor mounts or cables, and that it helps you get more active while at a desk job. I also like that they stand behind the product, with a Limited Lifetime Warranty on the unit and a 3-year warranty on the motor and electronics.

There are a couple of minor safety issues, but nothing out of the ordinary for this type of product. The only real thing I’d like is more depth on the keyboard tray so you can use a larger selection of peripherals.

For the current price of $390, it’s a good value for anyone who wants to try out the benefits of a standing desk while keeping their existing desk.