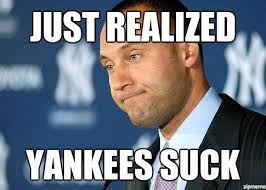 Happy hump-day folks! Actually, I really hate being the person to say that saying. Who the hell started that anyways? Moving on, here’s today’s Daily Read:

Derek Jeter Is Tired of Boring Athlete Comments, So He’s Starting a Blog

Derek Jeter, the former shortstop and surefire Hall of Fame inductee, spent years as the face of not only the New York Yankees, but also much of baseball.

“The New York Times plans to eliminate about 100 newsroom jobs, as well as a smaller number of positions from its editorial and business operations, offering buyouts and resorting to layoffs if it cannot get enough people to leave voluntarily”

Trading addictions: the inside story of the e-cig modding scene

“There is a rapidly growing subculture of e-cigarette users across the globe who spend countless hours tricking out their hardware. Vape modding, as it’s known, blends technical craftsmanship, engineering creativity and artistry into one — and unbeknownst to most, it originated right here in the UK.”

“Do you ever find yourself trying to hide your confusion at work meetings while the tech team is tossing around terms like UI and UX? Or maybe you’re all about downloading the latest apps, but you’re not totally sure what “app” actually means.”

Six Londoners Inadvertently Agree To Trade Their Oldest Child For

“In an experimental attempt to unmask the dangers of public Wi-Fi, six Londoners unknowingly agreed that to get on a city’s public Wi-Fi network, they would give up their oldest child.”

Confessions of a former internet troll

“Because I was 16 and because I was angry, too readily bored and too easily lonely, and because I wanted very badly to be accepted by anyone at all, I once spent the better part of an October weekend doing nitrous oxide in a San Diego hotel suite with a dozen or so hackers and internet trolls.”

Is Computer Coding an Art?

“The “art” label is appended to show that a commercial product has transcended its industrial creation or that some higher, more thoughtful intelligence is at work. So what about particularly good code?”

“When an Uber driver gets accused of behaving badly, the story inevitably ends up making national news. But no matter what the alleged offense, Uber has repeatedly used the same statement to assure the public it’s trying to improve.”