You can’t argue with the algorithm. 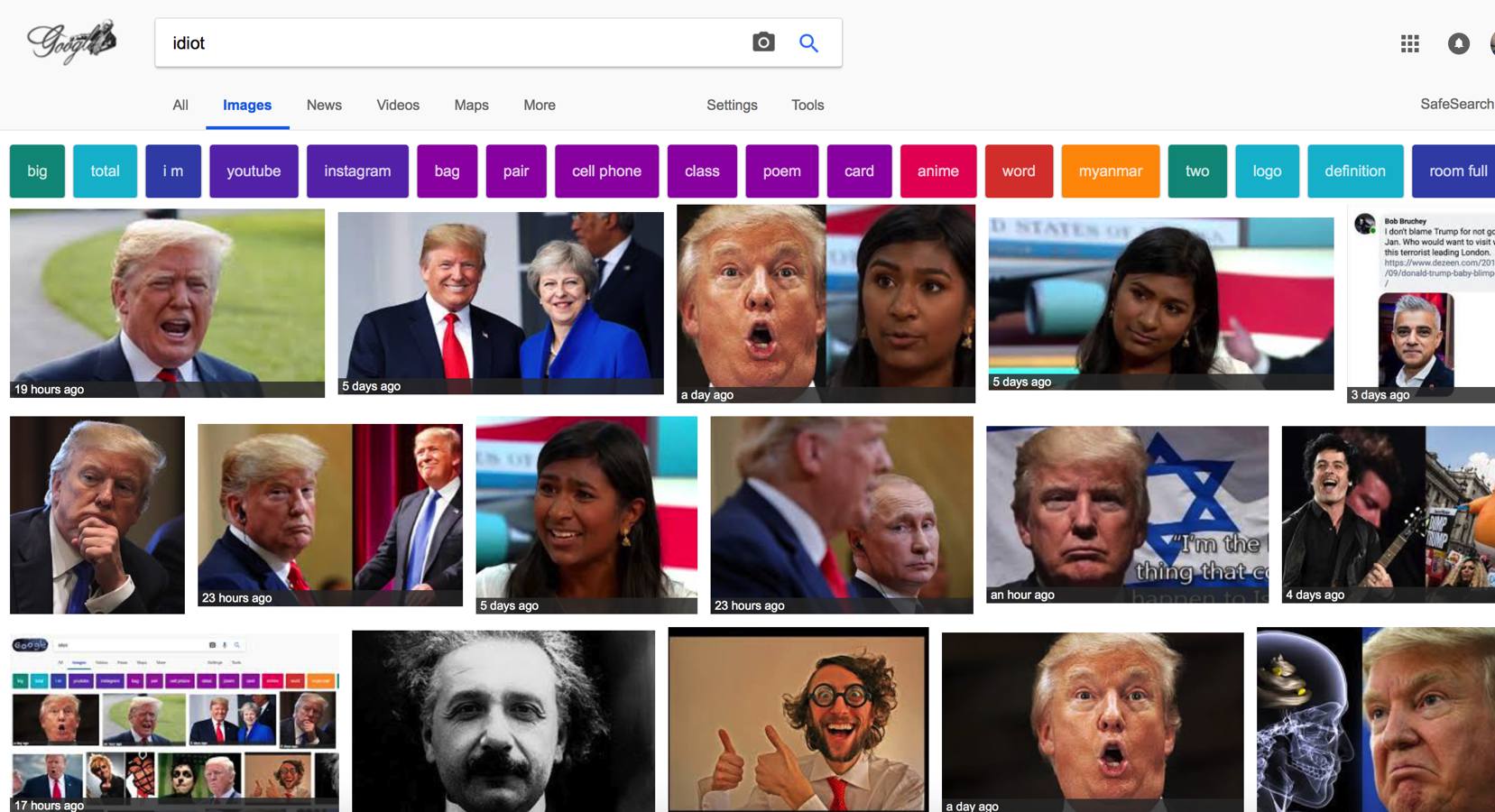 If there’s one facet of Donald Trump’s personality that truly cannot be called into question, it’s his intelligence. The man’s got brains. Yuuge brains. The biggest brains. You should see the size of this guy’s brains, I’m telling you. The self-proclaimed “stable genius” has touted the awe-inspiring superiority of his intellect on occasion to say the very least, and once even claimed (via Twitter, the preferred platform of geniuses everywhere) that his IQ was “one of the highest” in order to silence the losers and haters who dared suggest otherwise.

Following a recent trip to U.K which could at best be described as contentious, however, the President now finds himself facing the most vicious attack on his magnanimous brainitude yet, and from the unlikeliest of sources: Google. As a quick Google search will reveal, a photo of Trump currently populates as the #1 image result for the word “idiot”, marking the latest — and one might argue, most likely to receive an official response from the man himself — affront on the President’s ego yet. He’s also the #2, #4, #5, #7, #8, #9, #10, #11, and #13 result, but so as they say, the Image Search giveth and the Image Search taketh away.

What could be at the root of this sudden upswing in Trump-idiocy correlation? It’s difficult to say, really, but the biggest and brightest arrows appear to be pointing to a movement by the very same U.K.-based protesters of Trump’s diplomacy mission, which last week attempted to push Green Day’s “American Idiot” to #1 on the country’s charts in preparation for Trump’s arrival. Though the tongue-in-cheek act of rebellion ultimately failed (a plague upon your many homes, Drake!), a follow-up Reddit thread successfully managed to manipulate Google’s algorithm into associating the two through a mass upvote of posts containing a photo of Trump and, you guessed it, the word “idiot.”

This isn’t the first time that Google’s algorithm has been gamed, of course. Back in 2009, the company ignited controversy when searches for “Michelle Obama” returned a picture of the first lady’s face photoshopped with ape-like features. Similarly, a search of the word “rapist” before the US election produced no less than five images of Bill Clinton in the top 10.

The inability to discriminate legitimate and illegitimate sources has been one of the most criticized caveats of the company’s largely misunderstood algorithm over the years, but especially so in light of Google’s repeated refusal to alter (or even address) the methodology behind its madness. Take its response to a 2004 controversy wherein a hook-nosed caricature linked to shady, anti-Semitic websites began populating under the search term “Jew”, for instance.

A site’s ranking in Google’s search results relies heavily on computer algorithms using thousands of factors to calculate a page’s relevance to a given query. Sometimes subtleties of language cause anomalies to appear that cannot be predicted.

To that end, the sudden spike between Trump and the term “idiot” could also be linked to the President’s recent conference in Helsinki, wherein he kinda-sorta-maybe committed treason by accepting Vladimir Putin’s denial in regard to tampering with the 2016 election over U.S.-backed intelligence. Which he then attempted to walk back with the old “I actually meant the opposite of what I said” defense during a press conference today. All while reading from a pre-written statement that had “THERE WAS NO COLLUSION” scrawled across it in sharpie.

Yeah, this is all clearly Google’s fault. Everyone move along. Nothing to see here.

Get crazy in the comments, you know you want to.