It’s basically the original with a fresh coat of paint and updated soundtrack, but it’s still one of the best arcade brawlers on the market. 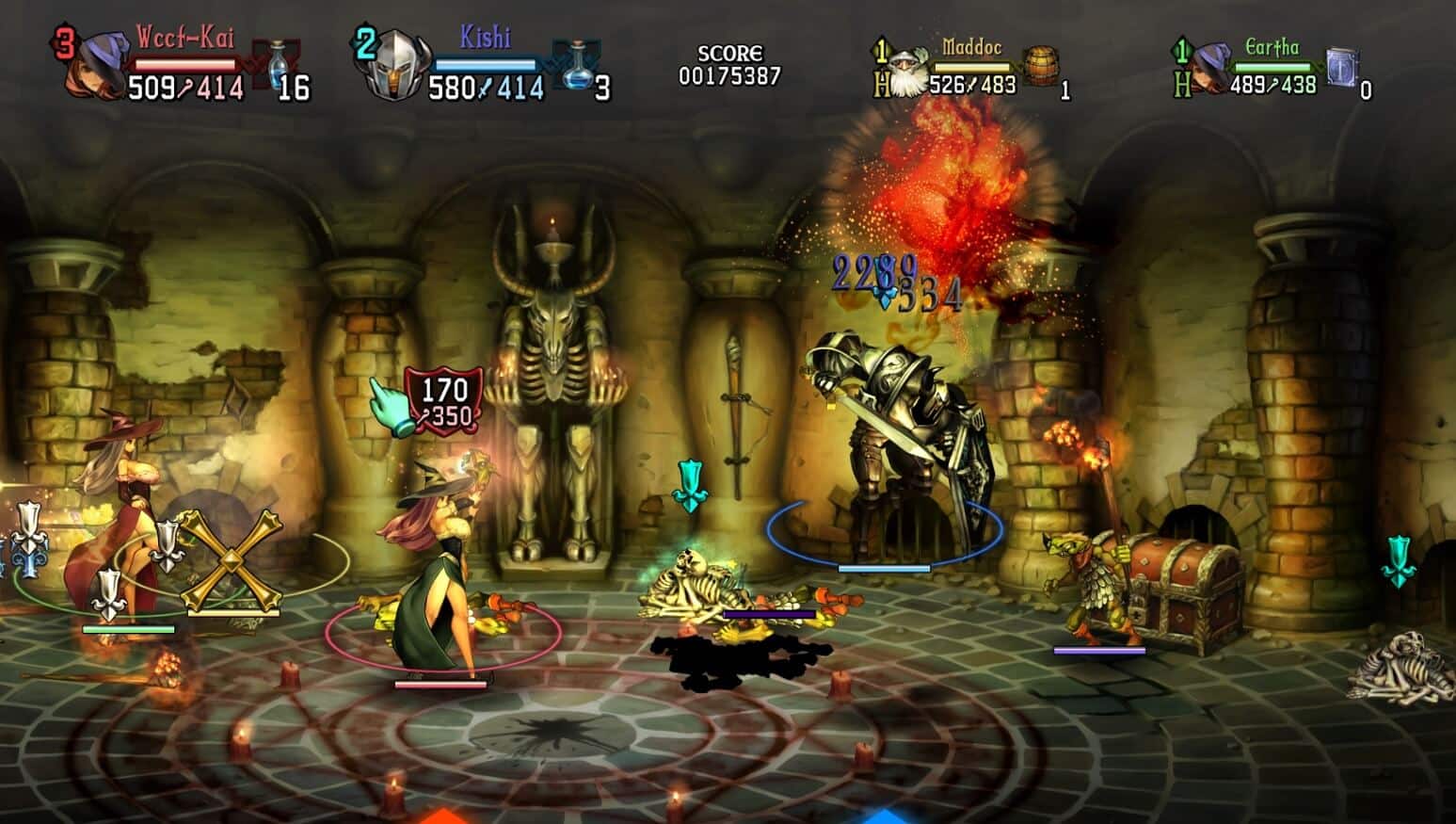 Image: Wccftech
The Good
There are hundreds of hours of things to do in this game, the 6 playable characters make sure you enjoy every second.
The game is just incredible looking and sounding. This is why games are art.
Plenty of little extras to keep you busy and engaged.
The Bad
Multiplayer is good but could have been better.
9
Overall

Oh Dragon’s Crown, how I believed I missed you.

Well, this is it ladies and gents, I’ve encountered a game that I’ve actually struggled to objectively review. Way back in 2013, I reviewed the initial release of Dragon’s Crown released for the PlayStation 3 and Vita. I thought it was a fantastic game with an interesting art design and completely enjoyable choose-your-own-adventure mechanics. As a beat-em-up, Dragon’s Crown didn’t necessarily reinvent the genre in any way but did manage to check all the boxes to remind everyone why they loved arcade-style beat-em-ups to begin with. Then the PS4 came out and everyone moved on with their lives, forgetting about Dragon’s Crown.

When Dragon’s Crown Pro was announced, I was super excited. I really enjoyed the time I spent with the original and some really great works of mine came from it. As soon as the code request form came in, I had it filled out and sent back to Atlus before their server had even finished sending out their initial emails. I was ready to hit the ground running, and when the code finally hit my email, I got the download preloaded on my PS4 and was ready to jump head-long into the good times.

Unbeknownst to me, Dragon’s Crown Pro included a really neat feature that immediately took the wind out of my sails. All of my save data from my original 200 hours of Dragon’s Crown was already ready to go on Dragon’s Crown Pro. Sure, my max-level Amazon was all ready to roll and just about every other character was level 20, but it had been 5 years and I barely remembered how to play the game at all. 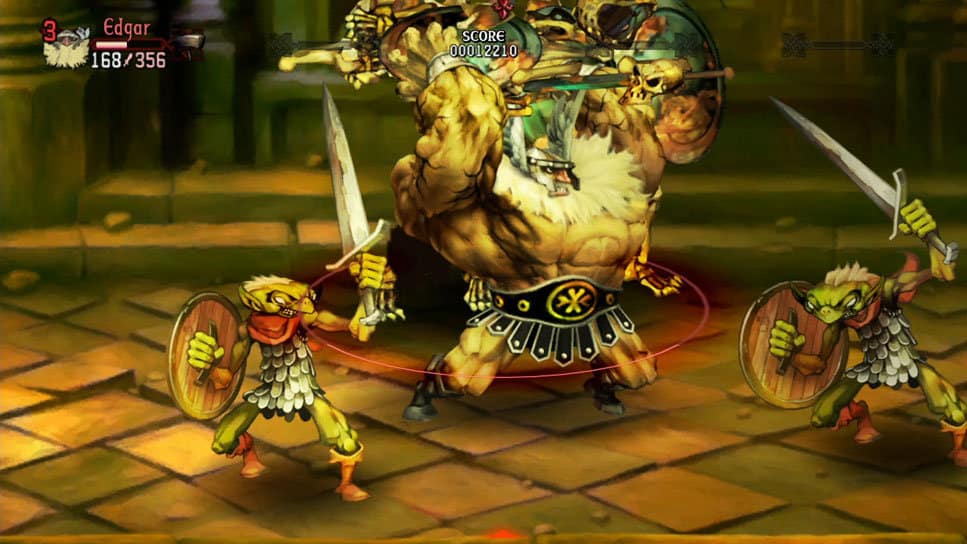 Now, it may seem like I’m belly-aching here, but hear me out. Dragon’s Crown Pro is still the definitive version of the game. It features the storyteller DLC, as well as all the patches and upgrades that were made to the game post-launch. The visuals are completely overhauled and the wonderful fantasy soundtrack has been rebuilt from the ground up. I can say with 100% certainty that this is Dragon’s Crown at its very best and if you didn’t get to play it five years ago, this game is something that needs to be experienced.

For new players, you will find that Dragon’s Crown Pro is an incredible arcade brawler that heavily incorporates role-playing elements into the game, along with a ton of loot and branching paths. Each playable character brings their own unique style into the fray. The fighter, Amazon, and dwarf are all melee classes that lean to their particular strengths to specialize their roles. The wizard, sorceress, and elf are specialist characters that rely heavily on their technical mechanics to maximize their damage and effectiveness. I played my 2013 play through as the Amazon and the Pro play through as the elf.

There is a story in Dragon’s Crown Pro, however, it isn’t nearly as key to the game as any of Vanillaware’s other titles. This is probably for the best since you unlock levels as you go but there is a fair amount of repetition and grinding to complete some of the missions the game throws at you near the end. Along with the plethora of side quests the game throws at you and the wonderful narration, you won’t really find the weak story much of an issue. I’m a huge stickler for this sort of the thing but I was more concentrated on getting new loot and kicking ass with my Amazon warrior, but here’s a quick breakdown of all the characters:

Amazon: She is big, burly and doesn’t have a ton of clothes. Her power lies in taking huge risks in combat, with stat boosts for having low heath or staying in combat for extended periods of time. Her power move causes her to lose her axe, but when she does she gains a much faster brawler style attack. Her moves all link together and she handles a lot like a fighting game character, in fact, she even has a flying kick move. She is ultimately what you would consider a beserker.

Elf: She is quick and nimble. In my opinion, she is one of the most varied characters in the entire game because she has melee attacks, ranged attacks, and even very light magic. Her arrows do very heavy focused damage to her targets but she only starts out with 10 arrows at a time. They are easy to find, but her strength lies in avoiding direct combat as much as possible. If things get hairy, she can use weak magic to do a little extra damage alongside her kicks.

Fighter: He handles pretty much exactly the way that the characters from the old beat-em-up games in the arcades used to handle. He has a strong defense and a solid offense, with plenty of special moves that compliment his play style wonderfully. His special attack also causes him to slam his weapon into the ground, leaving his offense crippled until he can pick it back up. He is probably the easiest character to get yourself started with just based off of his flexibility and ability to take a considerable amount of punishment.

Dwarf: This guy pretty much shares the Fighter’s stats, although he is slower and much more susceptible to magic based attacks. Ironically, he is the most durable character in the game and has a few attacks that allow you to hit multiple enemies at the same time. The dwarf’s special feature is that he can pick up enemies and hurl them around the screen or he can also pick up objects like boulders to use against bosses. He along with the fighter are the 2 easiest characters to play.

Wizard: The strongest magic user in the game. He can equip multiple spells and use them in conjunction with one another to create massive and deadly combos in combat. He is a “glass cannon” so to speak so he doesn’t take physical or even magic damage well at all. However, with his large catalog of high-level magic at his disposal, it isn’t unreasonable to expect to be able to kill enemies before they really get close enough to mess you up. I found he is most susceptible to enemies with crossbows.

Sorceress: The extremely busty magic user that offers all sorts of different types of spells to take out enemies and assist the team. She can hold her own quite easily but she also has spells that can protect her party and even create healing items for her to use. I tried to make it a habit of keeping her around because her assist magic can be the difference in the harder difficulties

For veteran players of the original game release, your value differs on how long you played the game for. If you played for a long time, you may not find much value in the added features or content. If you played a whole bunch before the first major updates to the game, you’ll find the game is narrated (which I can’t recall if it was new or not but it certainly wasn’t something I remember) and a massive amount of quality of life aspects have also been added in to make sure the game is the best version it has ever been. All veteran players will immediately notice that the game graphics have completely been overhauled, which says a lot because it was gorgeous to start. They will also notice that the orchestrated soundtrack has been remastered, it sounds so much more organic and full than it ever did in the past.

The reason I struggled with this review is that Dragon’s Crown already received a 9.5 from me five years ago. Nothing in the game takes away from the original release and any addition has only improved the game, however, the game still isn’t perfect. The grind can still be a little tedious and multiplayer can be finicky at best. I’d like to think that I have improved as a reviewer since 2013 as well, so a 9+ score is exceedingly rare from me. In the end, I think I found a healthy compromise.

The Good
There are hundreds of hours of things to do in this game, the 6 playable characters make sure you enjoy every second.
The game is just incredible looking and sounding. This is why games are art.
Plenty of little extras to keep you busy and engaged.
The Bad
Multiplayer is good but could have been better.
9
Overall