No, seriously, where is the ammo, I’m dying out here. 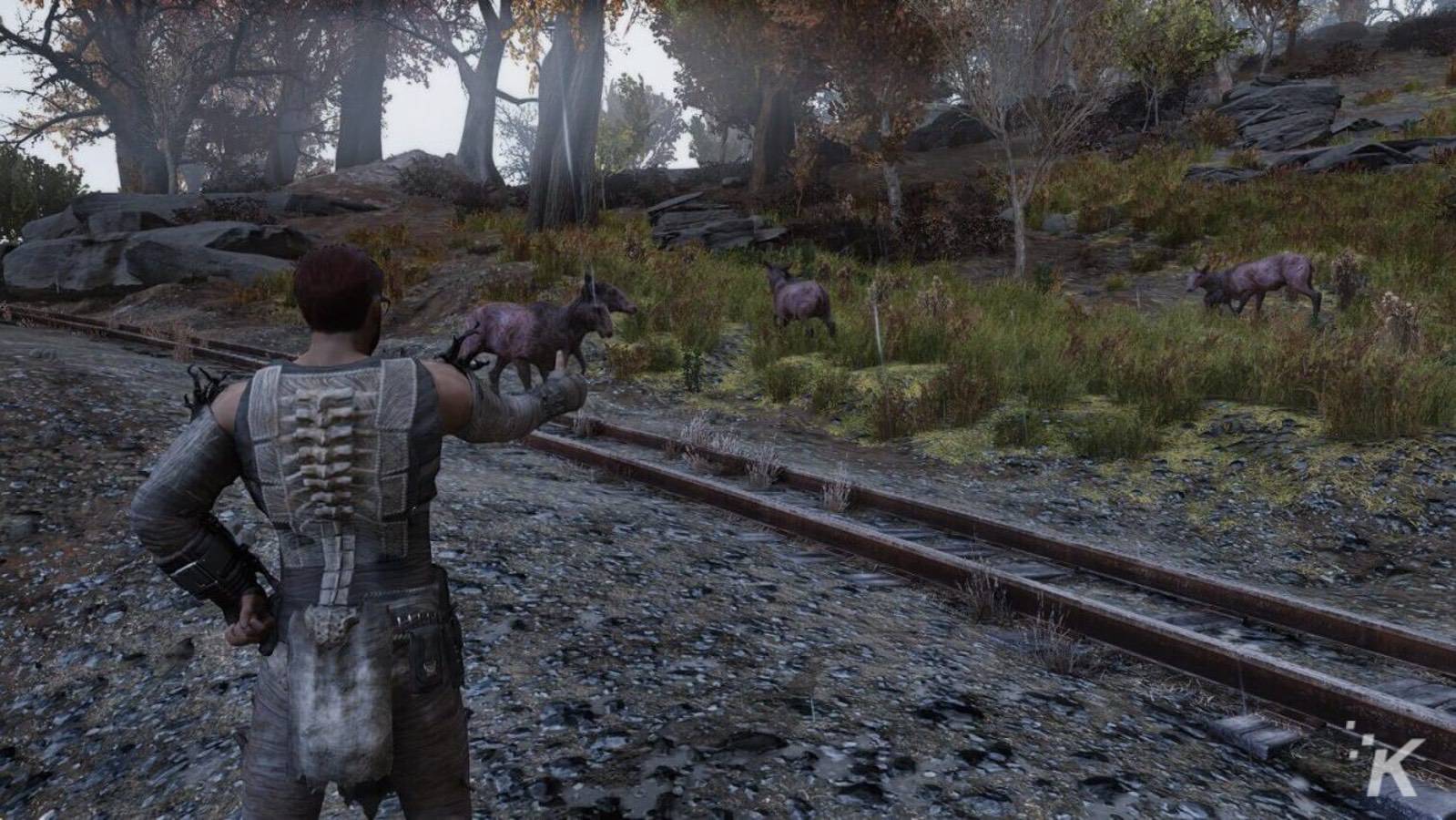 Fallout 76 released this week, and after avoiding it during the beta (well, I tried one time, and it uninstalled my game so, yeah) and after playing it for an evening, I wanted to share my experience before KnowTechie thoroughly reviewed the title.

Check it out below.

The sun is bright. Rays of sun dance and glimmer across the area right outside the Vault. Reclamation Day is upon us. I quickly start rummaging amongst the luggage and scraps, looking for anything to hit someone with, because the Wasteland is harsh and if Vault training has taught me anything it’s that everything wants to kill you in these rolling Appalachia mountains.

It doesn’t take long to find a pipe pistol and a long piece of wood. This will have to do for now. Ammo is scarce. Ammo is always scarce. Walking around the Vault entrance, some small robots start peppering me with red lasers. They are quickly dispatched, but I again find myself without ammo and a long hike ahead. I received a mission, but honestly, I’m not sure where to go, the map that I’ve been given isn’t exactly helpful either, so I pick a direction and run.

After a bit of hiking, I find an old lighthouse. There’s not much here, but I gather more scraps and a bit of ammo for my various guns. Some mole rats have decided that my presence is a disturbance to whatever it is mole rats do, but a couple stabs from my knife, and they quickly fall, their meat will serve me well.

After finding a campfire, I quickly make some food and decide to head back south to where some other Dwellers seem to be congregating.

Whatever is going on, I want in.

It’s a bit of a hike, but luckily, I have my Pip-Boy to play me some of the sweet sounds of the Appalachia. The sun is out, and Country Roads makes the time go by peacefully. The world of West Virginia is vibrant and stuffed with interesting houses and other places of interest, but there’s plenty of space to just run. It will probably get old at some point, but for now, I enjoy the time to take in the sights and pick some flowers.

After a couple of songs worth of hiking, I come across a bunch of old cars, and what looks to be some sort of shack, maybe something will be here. I check my map and find the place is called Gorge Junkyard. My Pip-Boy chimes in to tell me I can claim this base as my own and that it would cost me 25 caps to do so.

Gorge Junkyard and the man with the mask

Once the base is mine, I am alerted to a new threat; a raid is about to start, right where I’m at. I have approximately 60 seconds to prepare. I scramble, loading what little ammunition I have into my guns and quickly find a workbench to see what defenses I can build. Materials are low, but I can build a few turrets. I quickly place them around the main building and wait.

I’ve seen other Dwellers on the map but had yet to meet any others. That was about to change. The event that triggered at my camp sent a signal to the surrounding Dwellers. Would they answer the call or would I be left alone to fend off waves of rabid dogs? I would not have to wait long for an answer, an answer that I wish I had never found. It was here I met him. It’s here I met the tall hat and the big coat. It was here, at the Gorge.

He didn’t use weapons, no, just his fists. Clawing and clubbing his way through mangey dogs, he would occasionally speak, but I couldn’t understand him his mumbled voice. We jumped at each other a couple of times; he gave me a thumbs up. He seems chill enough.

Others joined, and we quickly dispatched all of the dogs and were rewarded with stim packs and ammunition for our efforts. The makeshift group disbanded. At, least everyone but the patriotic man in the suit. He followed. Silently.

Leaving my makeshift base (which was quickly claimed by someone else) I started making my way towards a radio signal.

After clearing some houses (and not realizing I had a stalker), I turned and saw that face and its blank stare. It was sitting there, on a porch, just watching me. Would he try to jump me or was he my guardian angel, I couldn’t tell.

Deciding that I wasn’t about to find out and still low on ammo and health supplies I knew we were about to have a waiting game. I couldn’t risk it, I found a house and looted it, waiting for the man in the suit to leave.

After what seemed to be hours (it was like two minutes), he finally scurried on to haunt another Dweller that passed by, and I continued on my way.

While rummaging through those houses that the man was standing at, I found a workbench and something happened, something I never expected – I became the thing I hated. 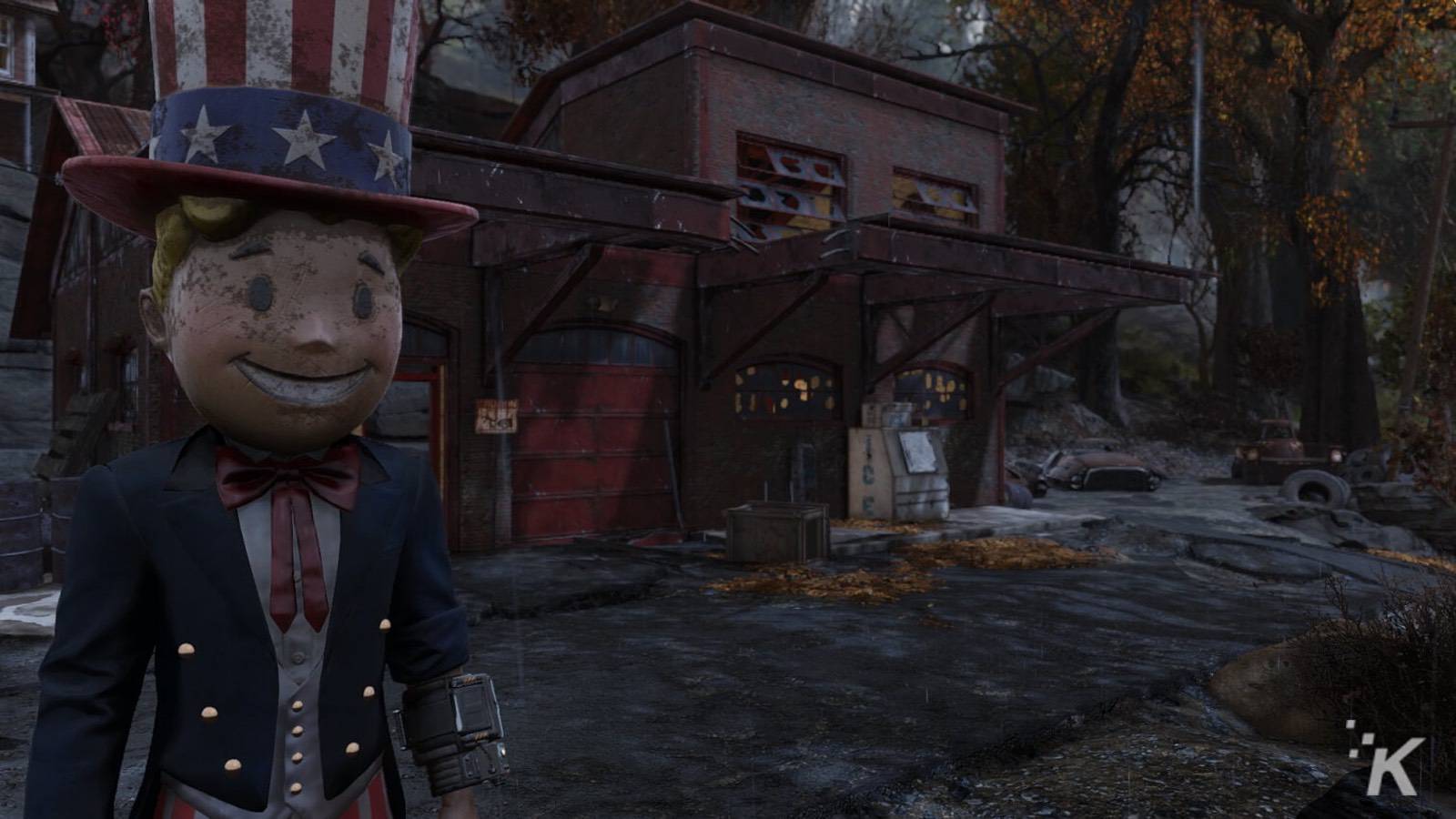 The house on the hill

A few days have passed now, and I’m beginning to get my bearings. I’m still low on ammo, but my skills have improved enough to where more of my shots are hitting, and I have enough melee weapons and tomahawks to get through most basic encounters with rats and scorched wanderers. 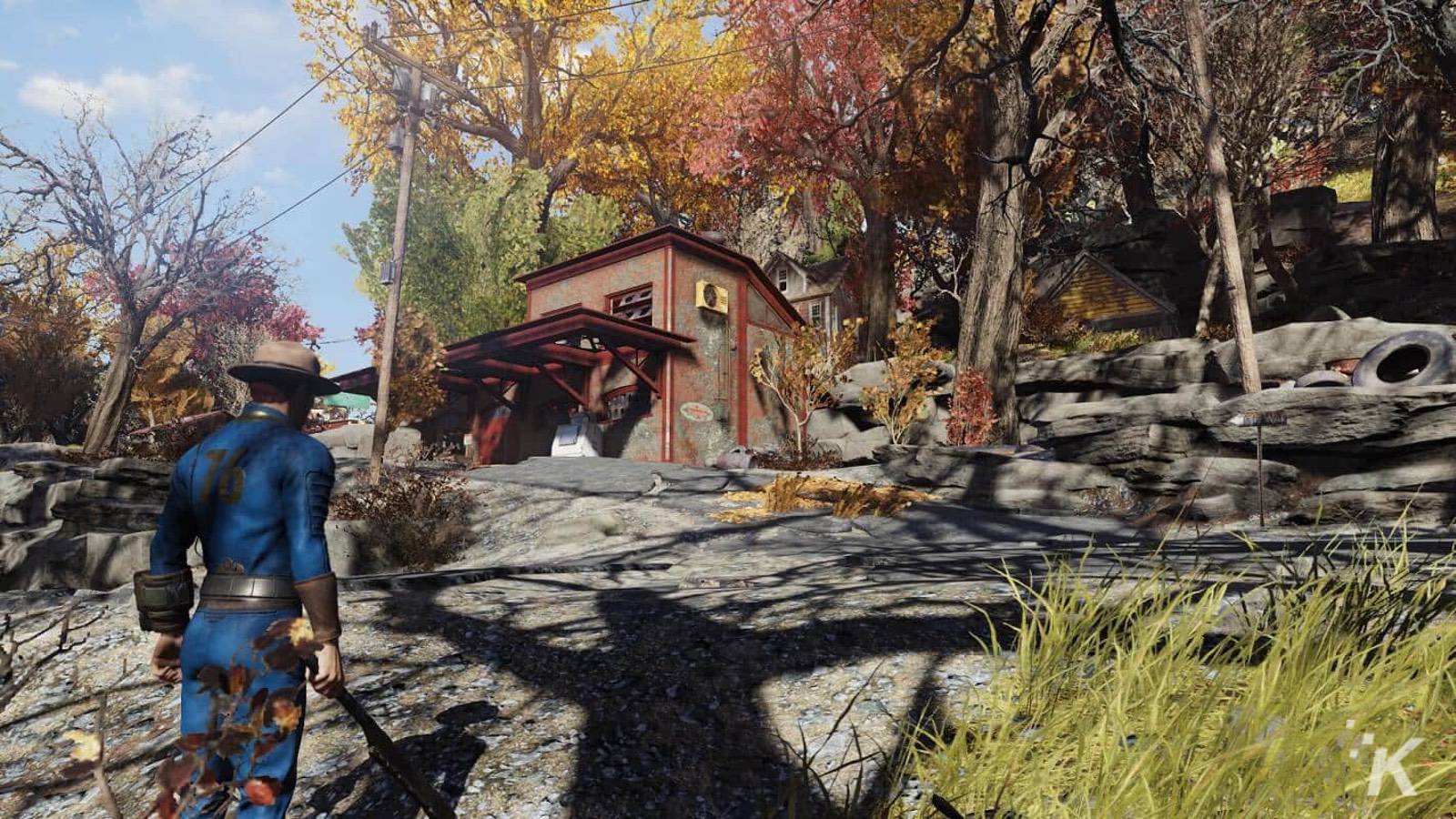 A house, nestled away in a hill has me drawn to it. Maybe there will be a new gun or some armor. Things I desperately need, but I find something much, much different.

After scouring the house, I make my way down to the basement, I was not prepared. 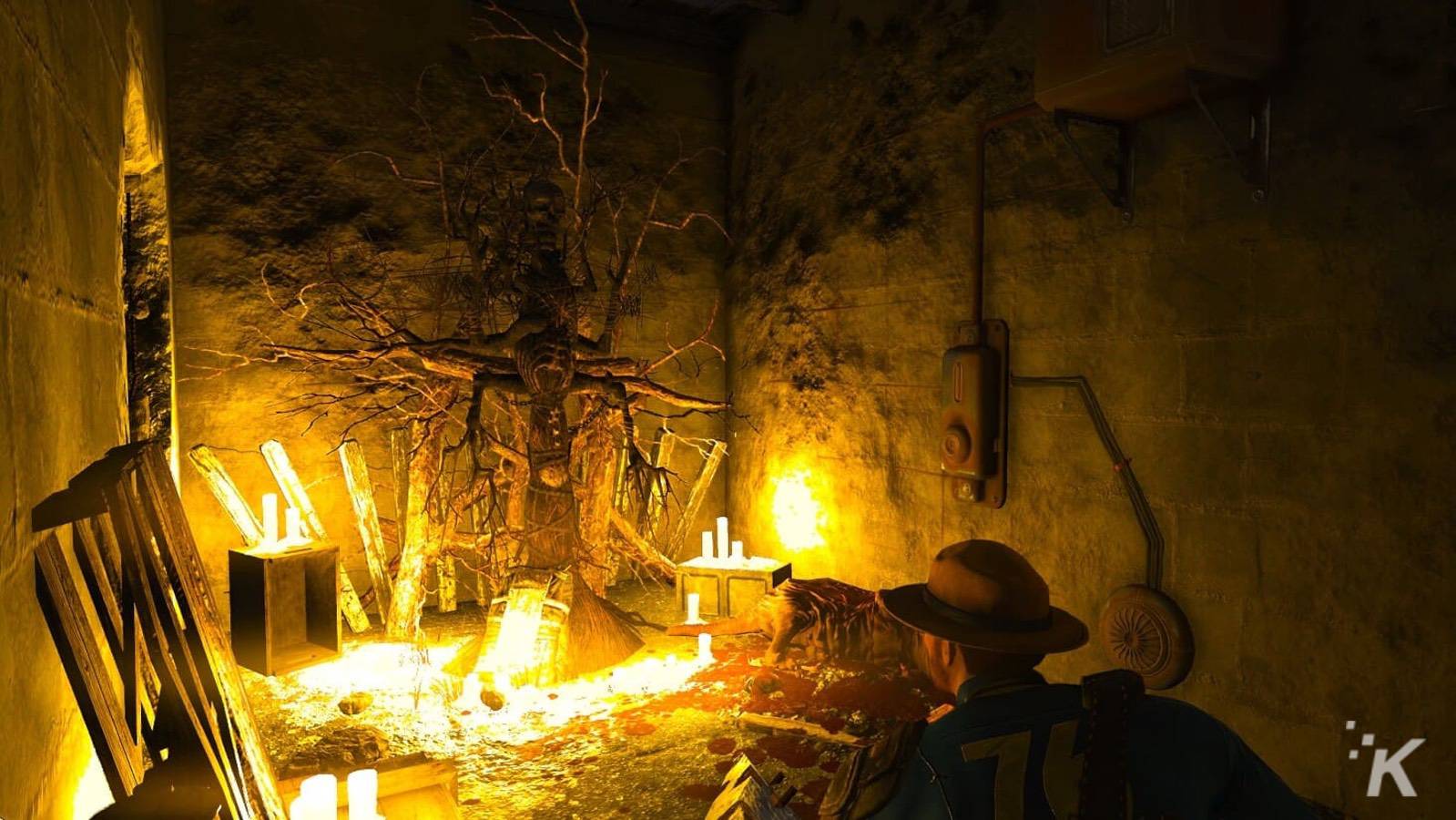 A shrine of sorts had been erected in the basement of this random house. I quickly grabbed some robes that lay at the foot of the shrine, grabbed some junk, and made my way out of the house. These hills are obviously hiding secrets.

After a bit more exploring, I’m guided towards a mission that’s a bit farther from the Vault. I quickly make my way over there, gathering plants and whatever random scraps I can find. Ammo continues to be a problem, and my clean water and food are running low, as well. This is causing my AP points to drain quicker, making it more difficult to use VATs on the various wanderers that decide I’m worth the effort.

I crest a big hill and there it stands, the first real city I’ve seen in the game. I do not get long to marvel at the location, however, as I am quickly swarmed by robots that only have one thing on their mind, to kill me. I almost miss my silent stalker, the man in the suit, but only for a second. He could probably punch all of these things dead.

As I make my way through buildings and tents, gathering supplies, things are going pretty smoothly. I have a shotgun that makes quick work of the creatures in the town, but then I turn a corner only to be met with the biggest creature I’ve seen in the game to date. 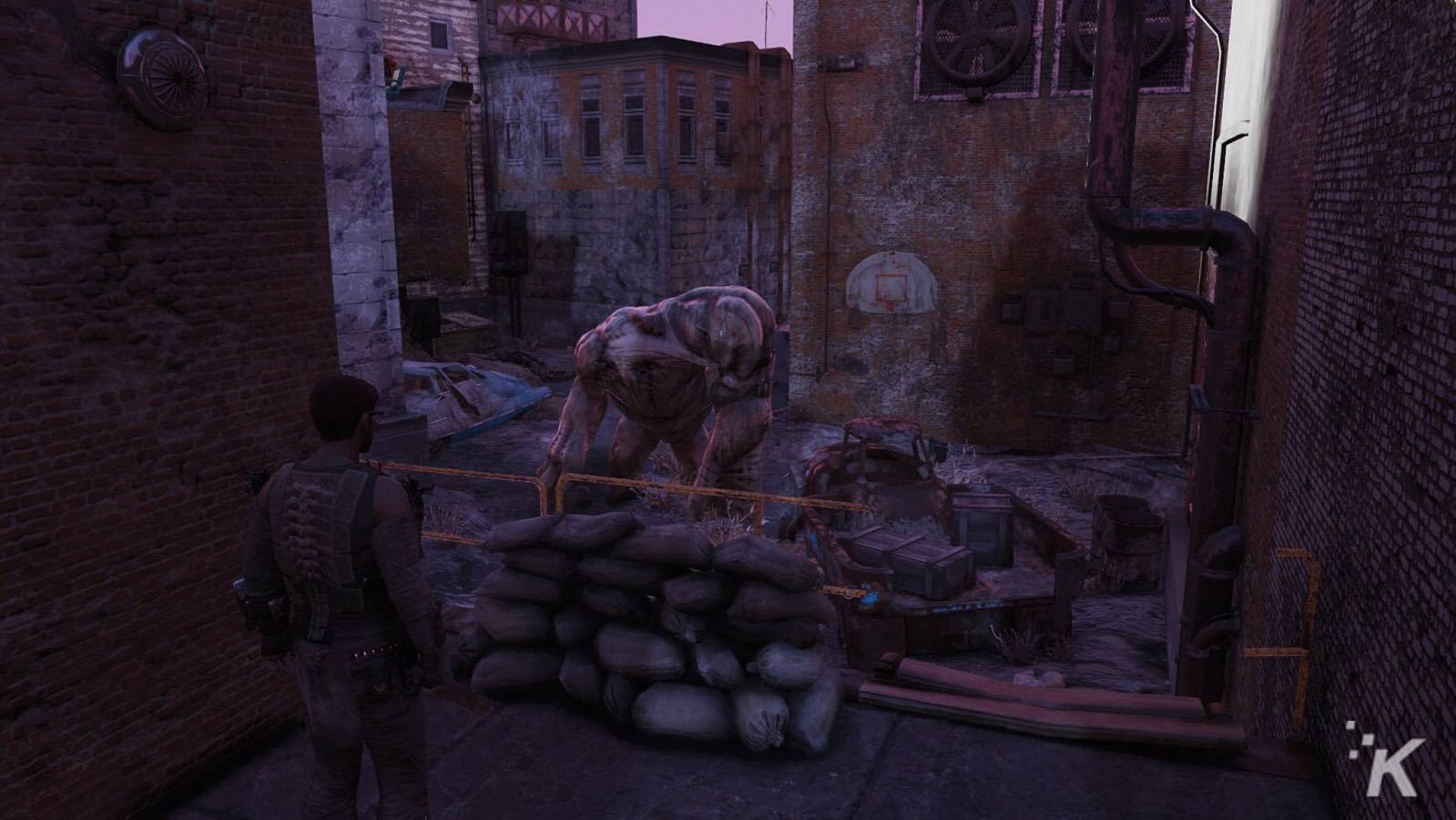 This is a fight for another day.

So, there you have it, the first two or so hours of my time with Fallout 76. Expect a full review in the near future.

Fallout 76 is available for Xbox One, PlayStation 4, and PC.

Have you played Fallout 76 yet? How did you feel about the game? Let us know in the comments.