Let’s talk about being offended about video game difficulty menus 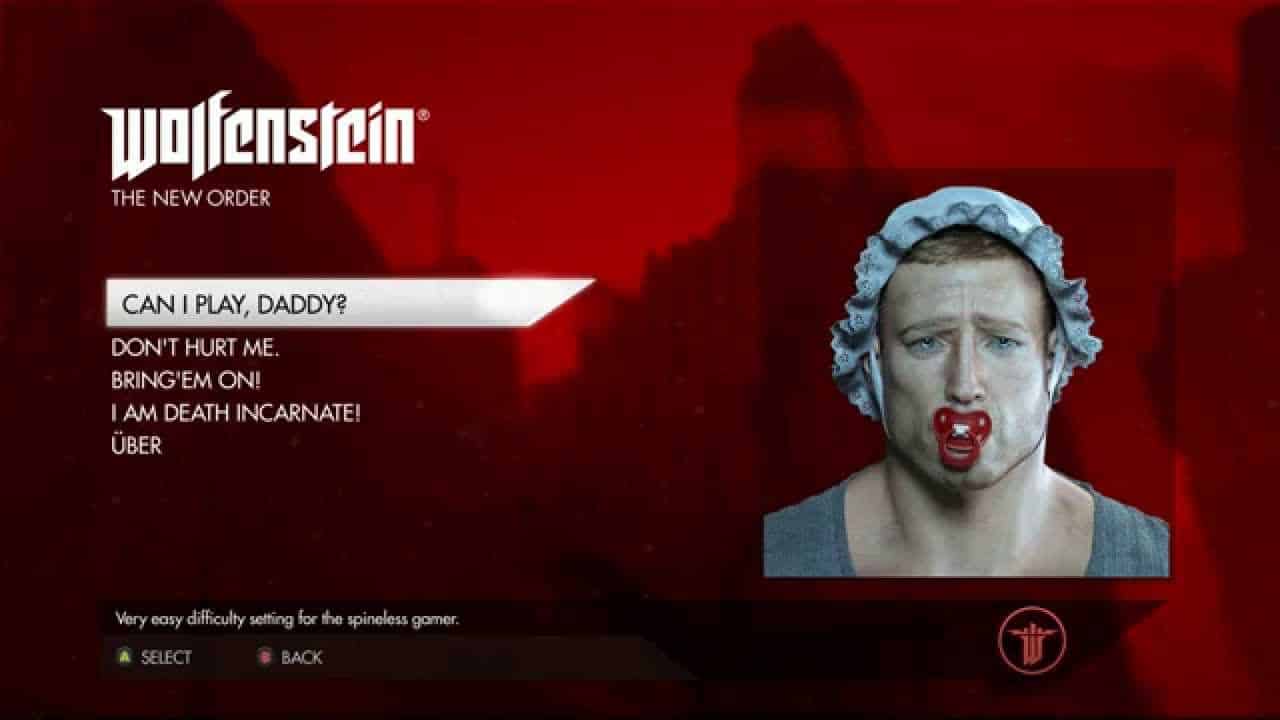 Here at KnowTechie, we usually aren’t ones to write an article about an article someone else at a larger publication wrote, but it’s a sad state of affairs when jokes that have become a staple of a series are considered bullying. While there are issues within our industry, it’s important to notice when a game developer is making a joke over making a decision that is, well, an issue. It’s a mountain out of a molehill and we have to be careful or risk games losing their personalities.

The image of BJ in a baby bonnet and pacifier has been around for 25 years. It didn’t bother me when I was 9 years old (the same age as my oldest) and it sure as hell doesn’t bother me now. As a matter of fact, I showed my son these options and his response was “So your character is dressed like a baby if you choose that option?” When I told him no, he was disappointed. He also thought that was a mode that kids like him could select, which obviously isn’t the case.

Also, no, I’m not letting him play this.

I suppose the argument here is that these images and game modes are making fun of players for choosing lower difficulties. I’d argue that it is far more frustrating when I’m looking at what I need to do for achievements and I see things like “Beat the game on mein leben” or some garbage. At that point, I feel like I am being forced to play a harder difficulty or I won’t be rewarded for playing the game. That actually forces me to do something I don’t want to do. I like to play games on easier difficulties these days, with or without the silly ribbing.

Sure, I’ll be the first to say that actively making fun of another player is stupid and you should feel bad about it. I was playing Metronomicon and didn’t want to admit to J that I had to play it on easy, where I still found it brutally difficult. When I did tell him, he told me that he understood as the game was pretty tough.

I think that as gamers, we oftentimes are critical of ourselves for not being able to be on an equal level as everyone else, when in truth, we just need to be aware of our strengths and weaknesses. I know I’m awful at rhythm games, I accept that there really isn’t any way to improve than start at a lower difficulty and work my way up. Who cares what they name it. Did you know that Fractured But Whole uses the character skin color as the difficulty slider and the outrage was minimal?

I could see getting riled up if “Daddy can I play” was a portrait of BJ in heavy makeup and a cheap wig, but all the baby bonnet and pacifier are meant to throw a little self-deprecating at the player. They are encouraging players to play on higher difficulties but doing it within the same options that the series has been using for a quarter of a century. Hell, there hasn’t been an issue with the 2 modern releases either.

I dunno, if you feel like you are getting peer pressure from a video game, maybe you should consider something safer, like No Man’s Sky. I mean that’s a much safer game if you somehow have your feelings set to “can I play, daddy?”

What are your thoughts on all this? Share what you think in the comments below!