One part rogue-like, one part Metroidvania. Mix in some speed running and you’ve got yourself a tremendous baby of a game. 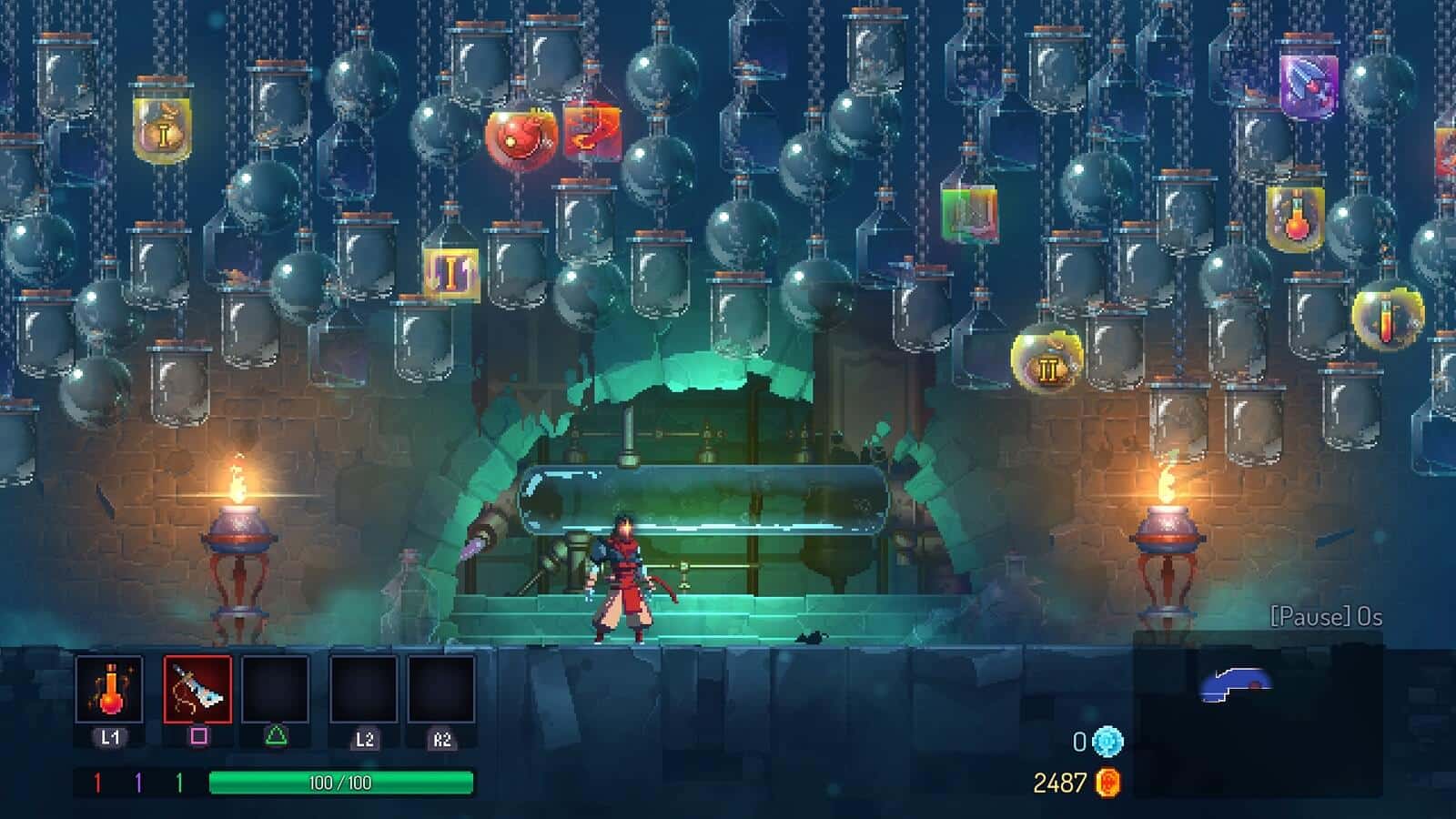 Back at PAX East 2017, I met with Motion Twin and a cheerful man named Sebastien Bernard who wore a lovely red scarf and delightfully showed me the clever concoction he’d been working on while I slummed around the Indie Megabooth. I knew absolutely nothing about Dead Cells when I first laid eyes on it, but the gritty, pixelated, yet somehow intentional and refined art style immediately grabbed my attention. I’ll admit that well-placed neon glows have always caught my eye, but Dead Cells was one of the most visually appealing games I’ve seen in quite some time.

With that in mind, Dead Cells was a smooth demo with tight combat but some glaring technical issues that made me a little skeptical that the final product would measure up to the competition. The final product still has some technical issues, but it’s still an absolutely tremendous experience. If you’ve watched the trailer, Dead Cells doesn’t exactly tell you what it actually is. Allow me to clarify: Much like the main character, it’s an amalgamation of different types of games combined into one fantastic product that absolutely oozes with personality and style.

I’ve been most closely comparing it to Rogue Legacy, although that’s not entirely fair as Dead Cells doesn’t allow you to continue your bloodline. It’s super challenging, though I wouldn’t call it Dark Souls, Bloodborne, or any other of the “omg this is so hard” types of games – in fact, the only thing Dead Cells has in common with those titles is that as you get better, you get stronger and the game gets easier as you progress.

Getting good is certainly something you’ll need to do in Dead Cells, but there are benefits for multiple different approaches of gameplay. This makes Dead Cells highly rewarding, addictive, and perhaps the most rewarding that progression has felt in any game I’ve played in a very long time. You can approach Dead Cells with the tried and true dungeon crawler approach, going for 100% map exploration and secret finding like you would have in Castlevania: Symphony of the Night, or you can realize that you suck and start doing speed runs in order to try and find the runes that unlock permanent upgrades.

The tradeoff at the speed run approach is that you’ll find doors that contain a boatload of gold, cells, and sometimes a weapon or a stat upgrade so that you can increase both your DPS and your health bar. Weapons are divided into colors, as Brutality uses Red, and typically includes your melee weapons like Swords, Daggers, Axes, and the Spartan Shoes that allow you to kick people into a wall in your best Leonidas impression.

Survival uses green and mostly consists of Shields, while Tactics weapons are purple and include things like Bows and the Fire Brands. Weapons typically one or two of these colors to denote which skill to level up, though you’ll eventually find colorless or legendary weapons which function on whatever color you’ve leveled up the highest.

As you fight your way through each area, you’ll occasionally pick up cells from enemies, which are used to permanently purchase upgrades. Similar to the way blueprints work in Rogue Legacy, if you survive each leg of the journey, you can turn in your collected blueprints between levels, which you can then permanently unlock as a droppable weapon using the cells.

There are also permanent upgrades that are unlocked as you collect and unlock blueprints. For example, once you unlock a certain amount of upgrades or blueprints, you can find the Hunter’s Grenade in the first level, which then allows you to throw a grenade that does no damage to a dying enemy.

The pay off is that the enemy will spawn an elite enemy and once you get it down to 40% health, you can use the whip that the grenade turns into to capture it which turns the enemy into a rare blueprint. This is a pretty cool function that isn’t normally found in these games. These elite enemies are brutally challenging, but just like every other enemy, they have an attack pattern and you just have to learn how to deal with the elite versions. Dead Cells is rewarding as you’re encouraged to learn how to handle things, otherwise, even the easiest enemy can quickly overrun you and end your run abruptly.

Everything about Dead Cells really just screams inventive. While the gameplay itself isn’t anything you haven’t seen before, the nameless character continues to inhabit a corpse and storm the enemy forces. If you’re able to plow your way through the levels and each of the four bosses, you’re rewarded with the final bosses weapon blueprint and subsequent playthroughs allow you to acquire boss stem cells, which increase the difficulty of the game. It’s not exactly a story ending, but there isn’t really one here and that’s why Dead Cells is so great – because you can pop in and just have a good time with it.

Runs can last five minutes or several hours depending on how you approach it. There’s also a ton of little interactions with the environment, like exploring holes for left behind loot, knocking on doors, or having creeps tell you to give them your runes, only for your nameless soldier to jump back in alert and give him a furiously shaking middle finger. Something I’d like to think a lot of people could use in their life right now. Dead Cells manages to copy everything it was inspired by, without feeling ripped off, but rather paying tribute to all of the greats before it.

Dead Cells was played on the PlayStation 4 Pro, and was provided for review by Motion Twin. The game is available for PlayStation 4, Nintendo Switch, Xbox One, and PC.