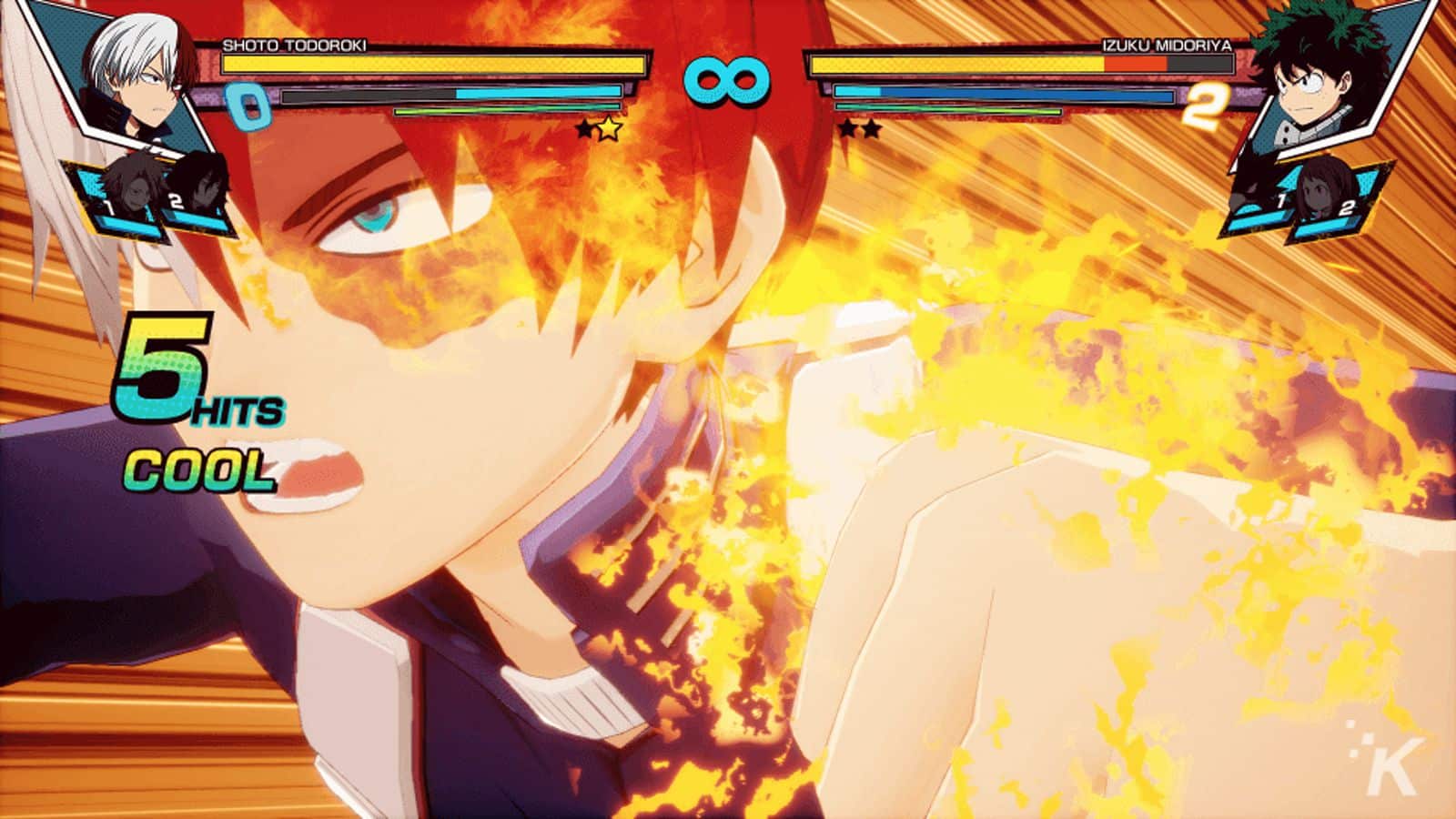 Image: Josh Knowles / KnowTechie
The Good
The characters of My Hero Academia come alive and all feel quite unique
There are plenty of game modes to keep you busy and lots of silly customizations to play around with
Playing with a friend is pretty great. If anything, my kids LOVE it.
The Bad
I understand not paying the English voice actors to be in the game, but why the inconsistent sub titles?
Single player elements get old quickly and are ultimately easy to deal with
I really don't like the music in the game, it's all sorts of butt-rock
6.5
Overall

These days, I admittedly watch more anime than live TV. What can I say, I’m a sucker for fun storytelling and cool stuff. One of my favorite anime happens to be My Hero Academia, a show where most humans in the world are born with special powers, called Quirks. As most people have Quirks, those that have effective uses or exceptional mastery end up being professional heroes.

Kids with these top-tier abilities end up going to high schools specifically meant to train them to become the peacekeepers of the world. Izuku Midoriya starts the show without powers and soon inherits the abilities of his hero All-Might, that’s essentially what you need to know going in. Watch the show though, it’s good. 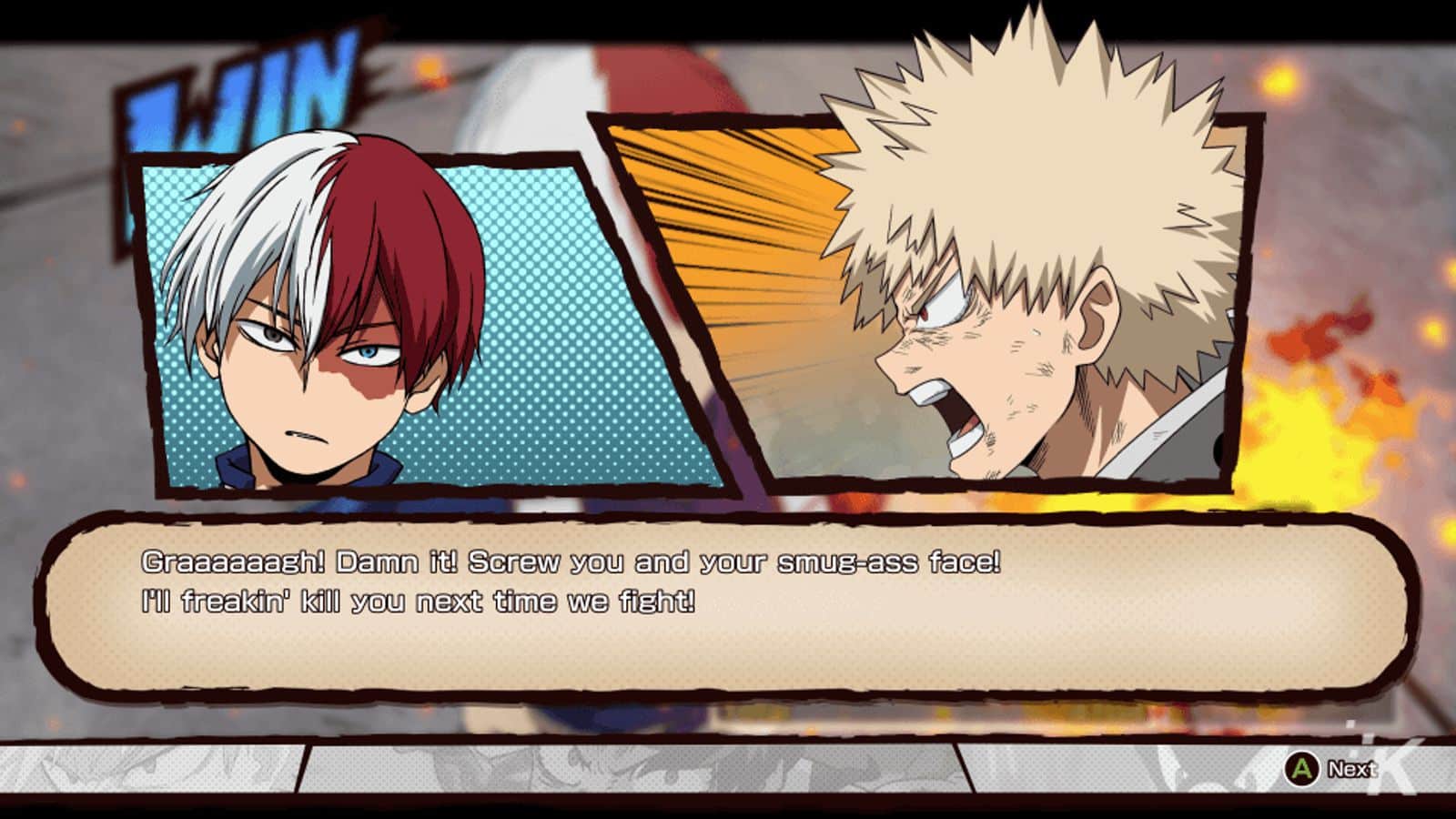 Without getting too ahead of myself, I want to be very up-front and honest here. I really wanted to like My Hero One’s Justice enough to give it a great score. Bandai Namco has cornered the market on anime-based 3D arena fighters, so it only seemed reasonable that One’s Justice would have the same polish as the Naruto series. Especially since the show is popular enough to set records with a limited domestic release of a movie recently.

Unfortunately, as a fan of the show and of games, My Hero One’s Justice feels almost painfully outdated in so many ways. At the same time, there are enough moments of inspiration and flashes from the show that there’s a bit of redemption here too. 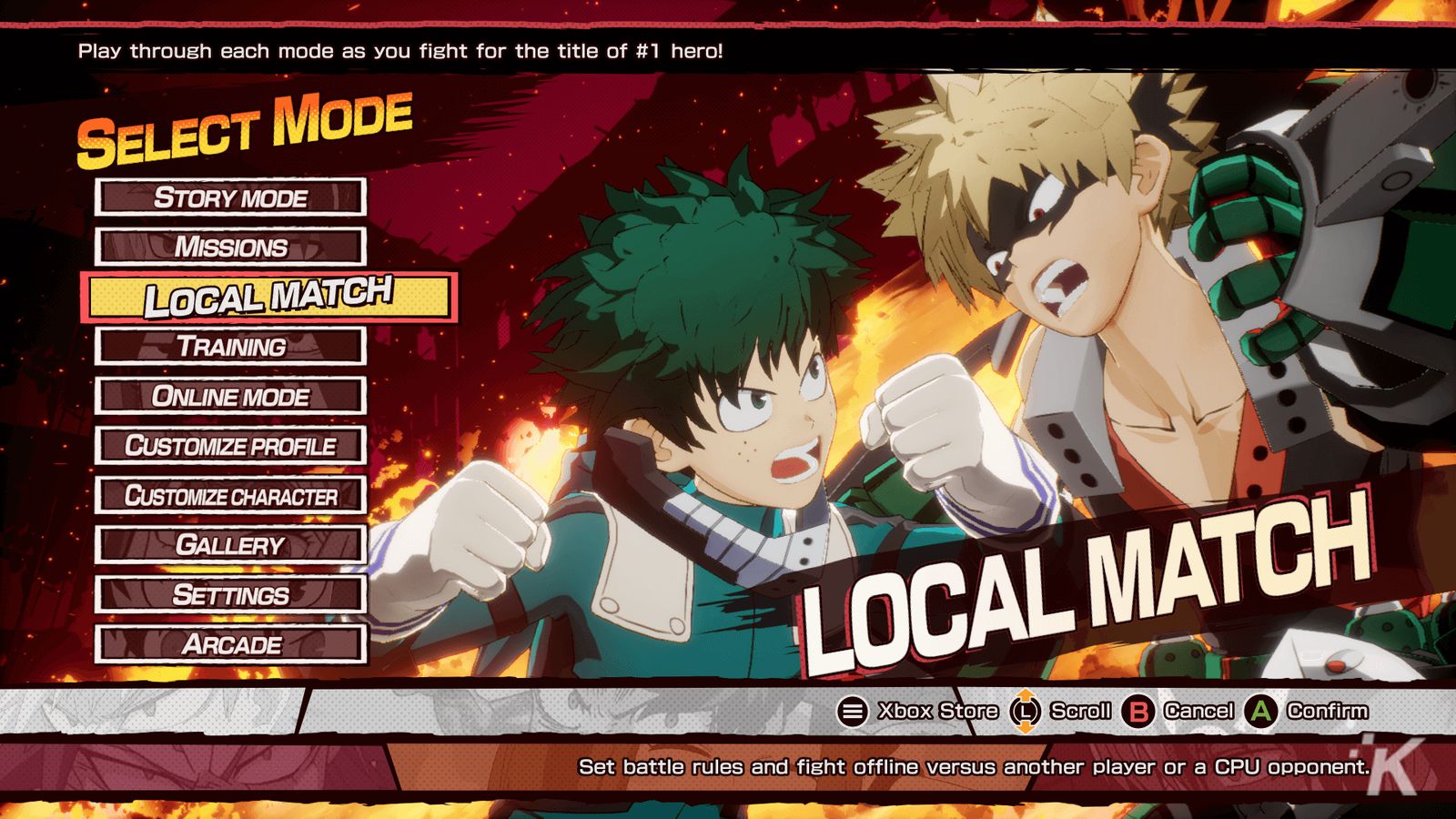 My Hero One’s Justice is, as I mentioned earlier, a 3D arena fighter. The Naruto series and games like Powerstone are probably the most popular that immediately come to mind. As many 3D fighters are, moving around and verticality are important to being good at the game. Attacks options are available in either normal or manual modes. Initially, I started with the former but quickly learned that getting the most out of my chosen character would require mastery of the latter.

Depending on the character you choose, combat can be flurries of attacks that decimate your opponents or blasts from a distance that allow you to get in close to finish them off. Each one of the available characters feels true to the anime, with their Quirks allowing them to do some awesome things.

Todoroki can close gaps while riding his ice and Iida can run faster than any other character in the game, Kirishima can take less damage and Bakugo hits like a truck. Seeing your favorite My Hero Academia characters in action is the shining moment to this game.

When it comes to game modes, My Hero One’s Justice has plenty for players to do. The story mode starts after the first major arc of the show ends (which is a damn shame) and tells the story of the series’ defining moment in the third season of the show. Giving you the option to play as the heroes and go along with the established story is kinda fun, but really doesn’t add much to what experienced fans already know.

Yeah, there’s a few “what if” moments within the story but the writing in them feels much weaker and like forced filler. With a hero and villain campaign, there’s a lot of opportunities, if nothing else, to learn the characters in the game. The VS mode will allow you to play against others, this is where you will spend most of your time and have most of the fun. The single player elements can feel a little rushed, but beating the crap out of each other with superpowers has a lot of staying power. 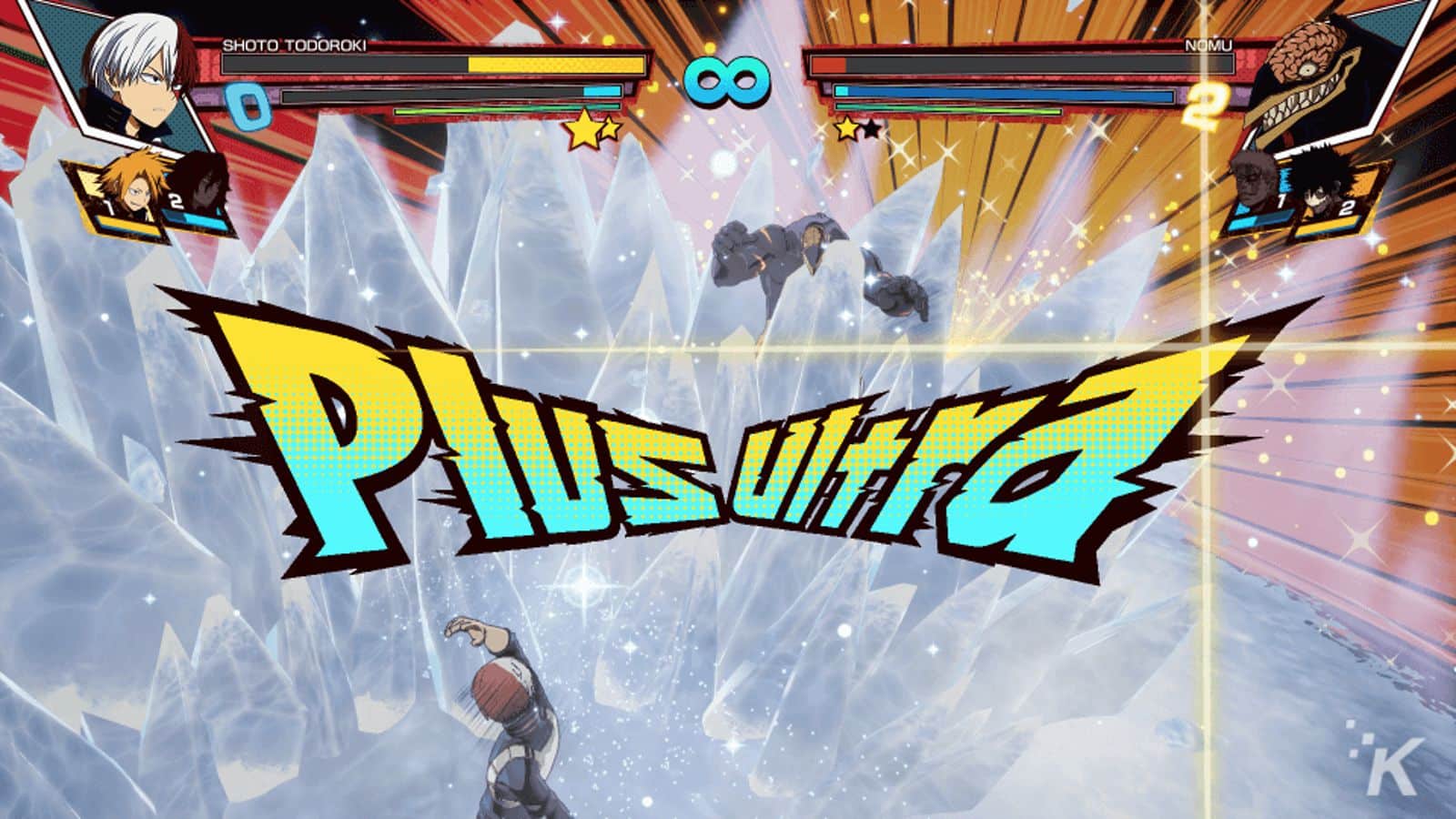 There’s an arcade mode, which is your standard fare for fighting games. Beat six enemies and get crowned the champion is all that you do here. It’s a good way to apply the things you’ve learned in the story mode before you start working on challenging the really difficult mode.

Mission mode is where you are forced to put all the things you’ve learned into practical application. This mode puts a light story into a series of special missions that allow you to earn some special unlockable prizes at the end. These prizes will allow you to customize your favorite characters and also your player card for online play. In all honesty, this really reminds me of Marvel vs Capcom 3.

Issues with My Hero One’s Justice

With the great execution of the characters in My Hero One’s Justice as well as the plethora of ways to play the game, you’d think that this was a very pleasing game. While I do have fun with the game, there are enough flaws that make me wonder if the game was ultimately phoned in. For starters, the game features a Japanese-only voiceover that has translations at some points and sometimes none at all. This is really jarring, especially when I’m being told to pick a quote for a character and there’s no way to know what is said unless you speak Japanese.

The audio tracks from the game aren’t from the show, which makes the moments in the game feel far less thrilling than in the show. In fact, the story within the game is fast enough paced that major plot points and moments are missed, ending up being a huge disappointment for those that know the show.

Also, as the third season of the show just wrapped up, the characters that are in My Hero One’s Justice are hollow shadows of who they are in the current product. Midoriya, for example, has a completely different fighting style in the anime from what is in the game. Sure, his updated version will be available for free as DLC, but this feels like an afterthought. At least two other major heroes will also be added into the game at a later time as paid DLC, it ends up being scattershot.

While not overtly horrible, the combat system itself does have a lot of limitation and repetition once you get the hang of what works best. Using Todoroki, I figured out a way to nearly breeze through any fight with a simple manual combo. There aren’t many layers to learn and utilize, unlike the Naruto Ninja Storm games, which becomes glaringly obvious when you beat several arcade modes with little to no effort.

For chain combos in Ninja Storm, there are escape moves. In My Hero One’s Justice, you can only hope that your opponent’s timing is slightly off so you can get a block up and counter. Repetition never feels good and a majority of My Hero One’s Justice’s fighting is simply just that.

At the end of the day, I’ve played worse games. Unfortunately, I really hoped My Hero One’s Justice would help fill the void while I awaited the next season of the show in 2019, but unless there are some significant upgrades to the game, it’s a one trick pony that just ends up being way off from PLUS ULTRA!

A copy of the game was provided to KnowTechie for the purpose of this review.

My Hero One’s Justice is available on Xbox One, PlayStation 4, and Nintendo Switch.

The Good
The characters of My Hero Academia come alive and all feel quite unique
There are plenty of game modes to keep you busy and lots of silly customizations to play around with
Playing with a friend is pretty great. If anything, my kids LOVE it.
The Bad
I understand not paying the English voice actors to be in the game, but why the inconsistent sub titles?
Single player elements get old quickly and are ultimately easy to deal with
I really don't like the music in the game, it's all sorts of butt-rock
6.5
Overall
Related TopicsGameTechieMy Hero AcademiaMy Hero One's JusticePlayStation 4ReviewsShonenXbox One