Review: Snakeybus – it’s as if Snake and Crazy Taxi had some weird love child together

If you were a fan of Crazy Taxi back on the Sega Dreamcast, you’re in for a treat with this.

The Good
Hella fun to play
Plenty of maps and different game modes to keep you busy
The Bad
Freecam never worked for me
The game is fun, but it's easy to get bored of it after playing for an extended amount of time
8
Overall

I don’t typically review games here on KnowTechie because, honestly, we have a crew more than qualified to write them, and not to mention, they’re a lot better at it than I am. But mainly, it’s because I don’t know what I’m talking about. But, here’s one thing I know for sure, Snakeybus on the Nintendo Switch is one helluva game.

Snakeybus is essentially the classic Snake game we’ve all come to love, mixed in with a little Crazy Taxi. But the difference here is that instead of a snake, you drive a bus. In the game, it’s your job to pick up passengers from around the map and drop them off in different locations. Each successful dropoff makes the bus longer. That’s the gist of it. But obviously there’s more to the game than that. 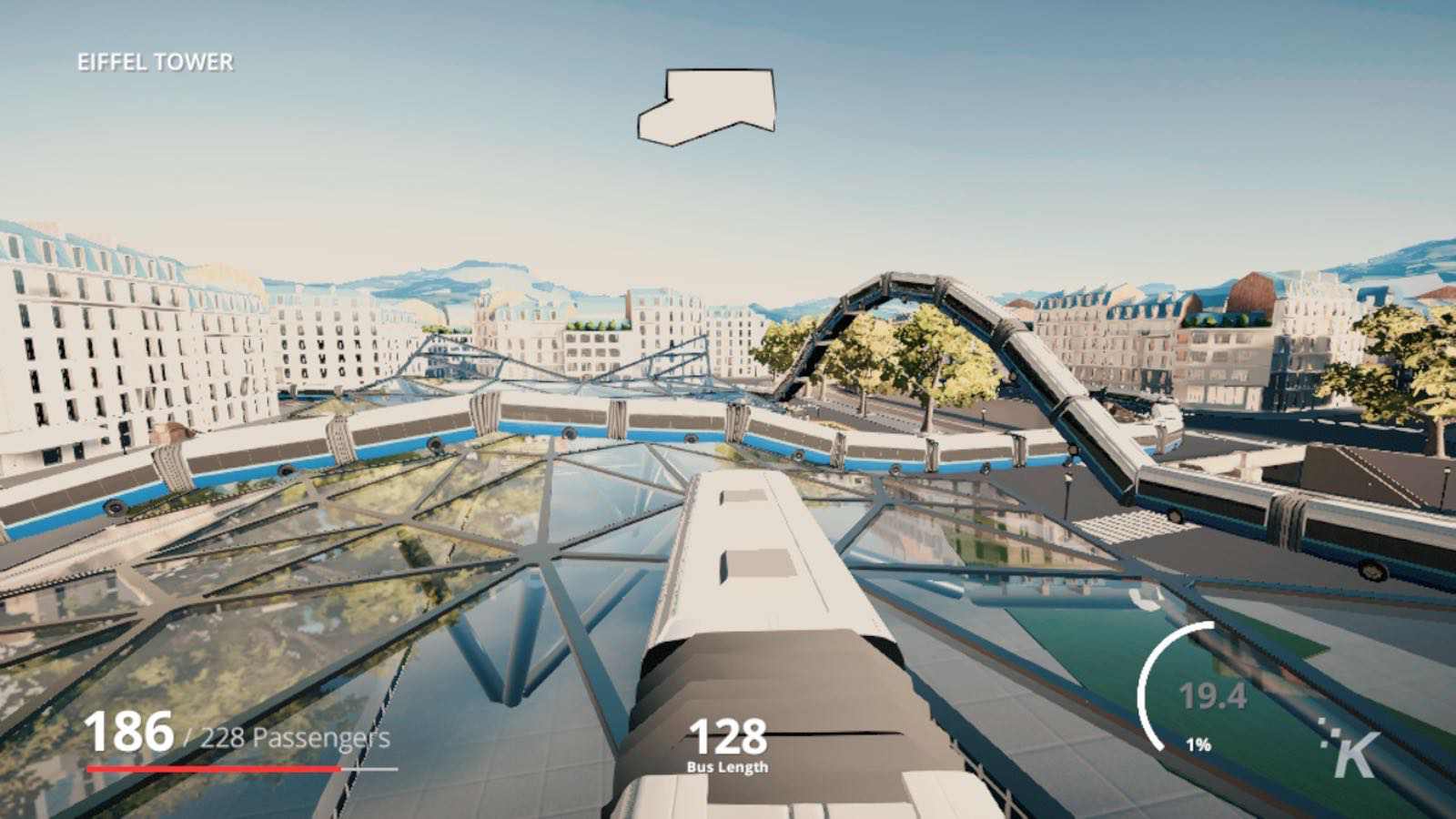 Here’s where it gets tricky. If your bus somehow comes to a stop (like crashing into a wall or any obstacle that gets the bus stuck), game over. Try again. Thankfully there’s a way to avoid this. The bus is equipped with jet packs allowing you to make long, extended jumps in the air to avoid any obstruction in your way. It takes some getting used to, but it adds so much to the game.

The game gets harder as the bus grows. Eventually, I had to figure out ways to maneuver my bus around the map without getting stuck in an alley, crashing into myself, or flying directly off the map. It gets frustrating, but it always had me coming back for more. It’s pretty addictive, and at times it can be really unforgiving. Expect a rage quit every once in a while with this game. 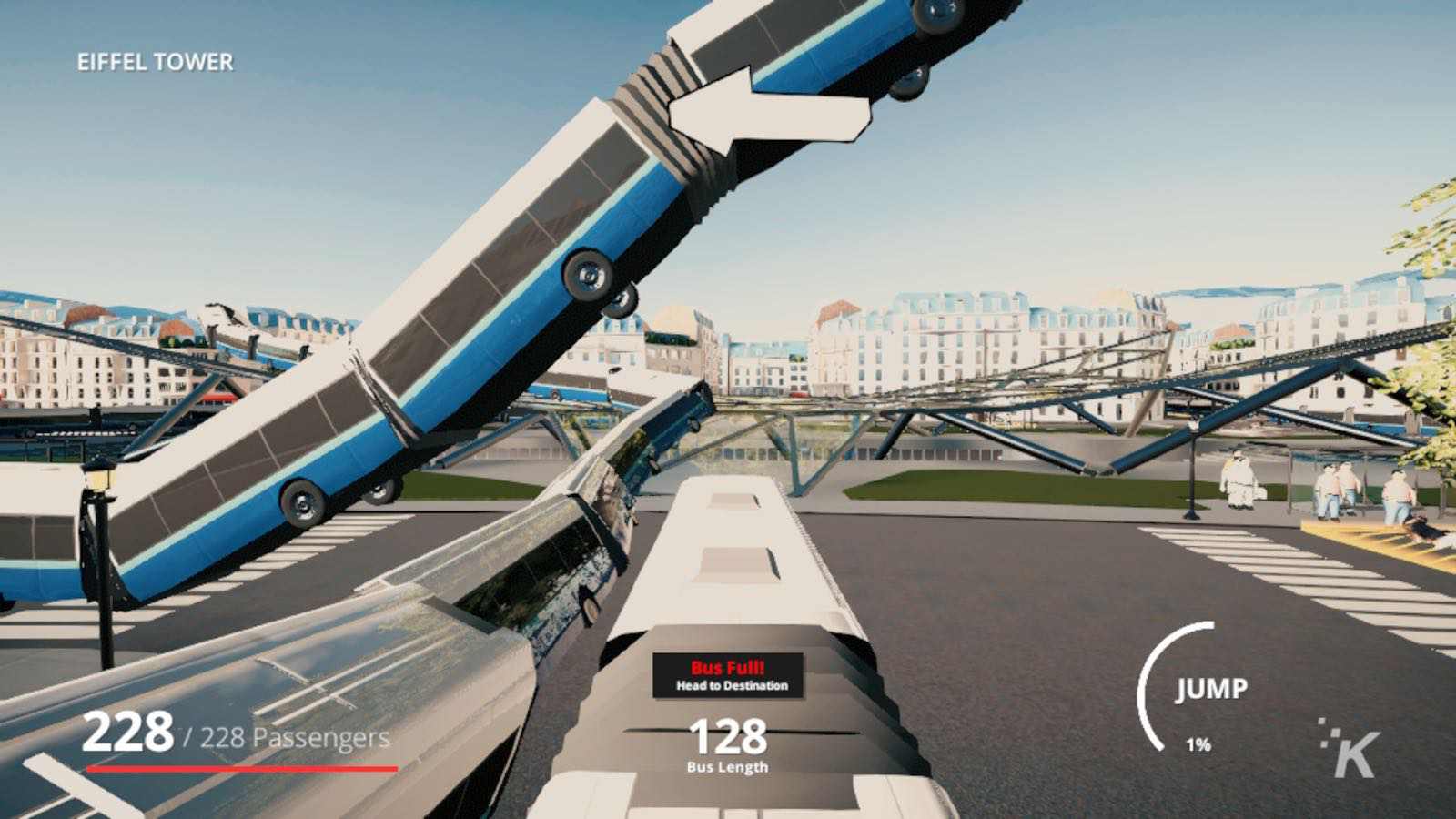 The game features various modes, including time trials, free-play, and ariel modes. There are 11 maps to choose from, which include Miami, Paris, some kid’s dorm room, and a handful of others that kept my scatterbrain busy. So you have plenty of options. Whether it’s competitive or something you want to chill back to – there’s something here for everyone.

Snakeybus is a lot of fun, but for me, there was only so much I could take at one time. To be fair, I had the same problem with Crazy Taxi. I mean, it’s a classic arcade-driving game. What more do I want from it? Would I recommend this game? Absolutely. And christ, at the time of writing this, it’s only $10 right now on the Nintendo eShop. That’s nothing. You’ll definitely get your value’s worth out of this game.

What’s your initial impression of this game? Is this something up your alley? Let us know down below in the comments or carry the discussion over to our Twitter or Facebook.

Just a heads up, if you buy something through our links, we may get a small share of the sale. Click here for more. A sample unit was provided to KnowTechie for the purpose of this review.

The Good
Hella fun to play
Plenty of maps and different game modes to keep you busy
The Bad
Freecam never worked for me
The game is fun, but it's easy to get bored of it after playing for an extended amount of time
8
Overall
Related TopicsGameTechieNewsNintendo SwitchReviewssnakeybus