Review: The VNYL Cam – a solid instant camera, if not for the whole lockdown thing going on right now

Image: Matt Hughes / KnowTechie
The Good
Extremely pretty, if you like neon
Instant photography is fun
The Bad
The price
7.5
Overall

On these hallowed pages, it’s typically the case that we review the latest tech. And yet, here I am writing about a camera first launched in 1981. Weird.

The product in question is a Polaroid 600 instant camera, which has been revived for 2020 by VNYL – which is, among other things, a vinyl record subscription service. In case you haven’t guessed, we’re plowing confidently into hipster territory here.

The VNYL Cam boasts an eye-popping neon design. It also comes with a subscription service, which sees boxes of compatible film drop through your mailbox on a monthly basis. But is it worth the money, particularly in an age of increasingly-powerful smartphone sensors and mirrorless cameras?

What that? Oh, another picture of my shoes

You could convincingly argue that the unlikely resurgence of the instant camera is primarily a consequence of Instagram and VSCO. These platforms make it possible to artificially paint photos with the kind of sepia hues that came naturally with the Polaroid cameras of old. While HP, Fujifilm, and others offer their own instant cameras, there’s a real hipster cachet in toting a bulky Polaroid camera of yore.

The VNYL cam is definitely bulky. Even when folded shut, it’s thicker than several chunky battery packs stacked together. It is, to use contemporary parlance, an absolute unit.

And it’s here, dear reader, I confess something. Being born in 1991, almost all of my photographic experience is with digital cameras, save for the 35mm film camera my mum used to bring on family holidays. Getting my head around the VNYL Polaroid 600 was, therefore, a bit of struggle.

It took me far too long, for example, to realize that it didn’t require batteries or charging. The charge comes via the bulky film cartridges, which slot neatly into the bottom of the camera.

I also was unprepared for how sensitive the shutter release button was. It’s delicate and easily knocked, which resulted in an anthology of moody shots of my shoes. And while that’s not really a problem with a digital or smartphone camera, it’s a bit more concerning when you’re using film that can cost as much as $5 per exposure. 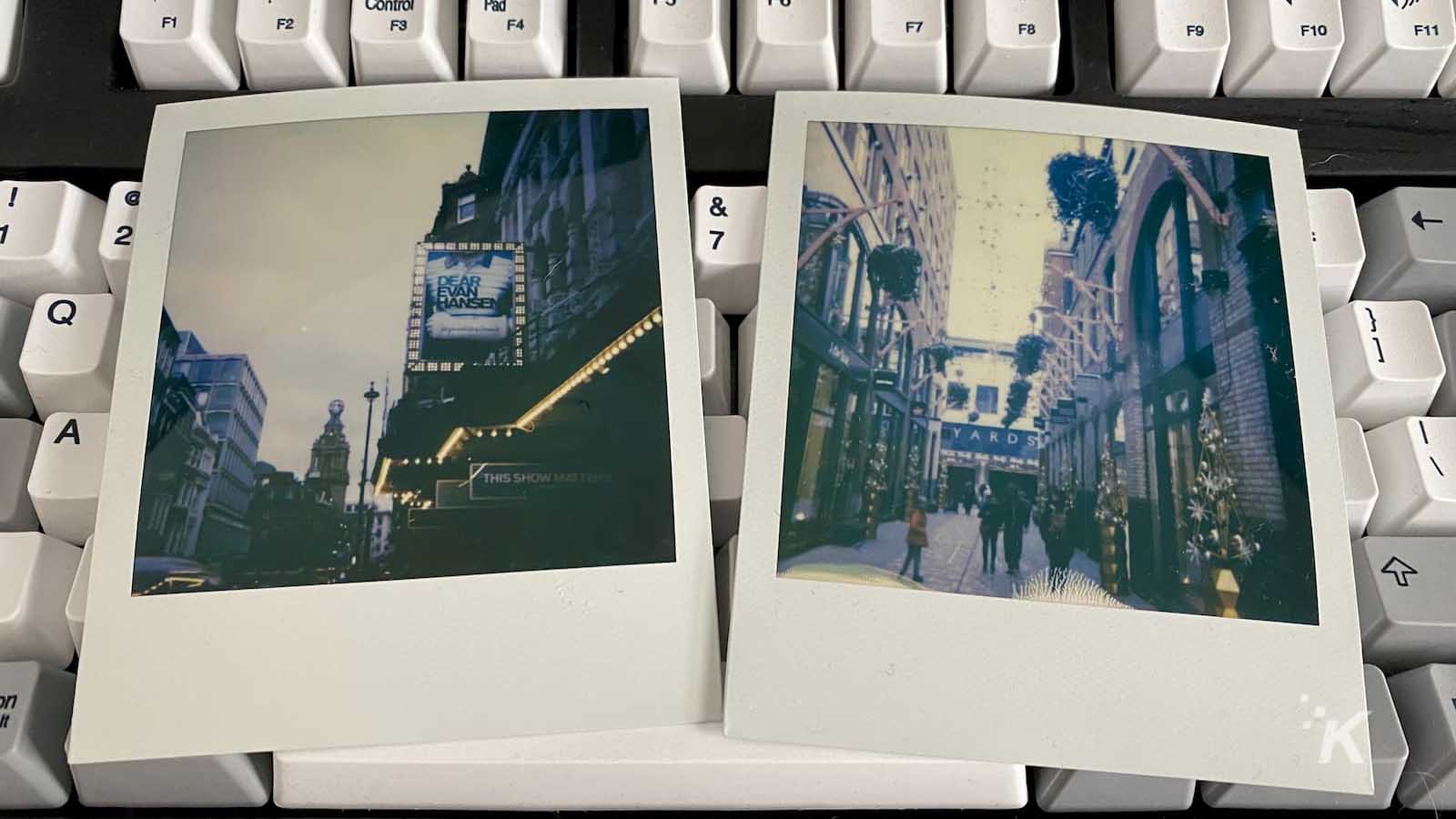 There’s something quite lovely about photography with a polaroid. Obviously, you must be more deliberate with what you capture. This forces you to be thoughtful in a way you otherwise wouldn’t be with an iPhone.

Despite what Outkast may have told you, shaking a Polaroid image doesn’t speed up the development of a picture – and can in fact damage it. No, my friends. Patience is the order of the day here. And during this point, you’ve got to be careful not to accidentally smudge the incubating photo with your thumb.

For a hot minute, you finally get why instant photography is making a quiet comeback.

Hang on. You said it costs how much?

The VNYL Cam Polaroid 600 starts at $199, which includes a three-month subscription to the company’s film delivery service. This will see two packs of instant film land on your doorstep. There’s also a $299 plan, which offers six months of film. And while this sounds expensive, it’s not too bad in the grand scheme of things. You can easily pay $40 for two packs of film on Amazon.

Of course, there’s a lot of competition on the device front. Polaroid sells the Originals OneStep+ camera for roughly $120. This worthy shooter is compatible with I-type and Polaroid 600 film, offers two interchangeable lenses (including one for close-up portrait photography), and supports a Bluetooth app that lets you remotely control the device.

There’s also the Fujifilm Instax Mini 9, which retails under $70. Film is a bit cheaper for this offering, making it a worthy budget option.

What sets the VNYL Polaroid 600 apart? Ultimately, I’d argue you’re paying a premium for a retro aesthetic. This is, effectively, the Urban Outfitters of photography.

In this world of COVID-19 lockdowns and social distancing, there’s probably not much point in buying a new camera – let alone one that devours pricey film. But when things get back to normal, and the sun starts shining again, the VNYL Polaroid 600 camera is worth taking a second look at.

The Good
Extremely pretty, if you like neon
Instant photography is fun
The Bad
The price
7.5
Overall
Related TopicscameraNewsPolaroidReviewsvnyl