Not the most in-depth fighting game to ever release, but there is some fun to be had with the title. 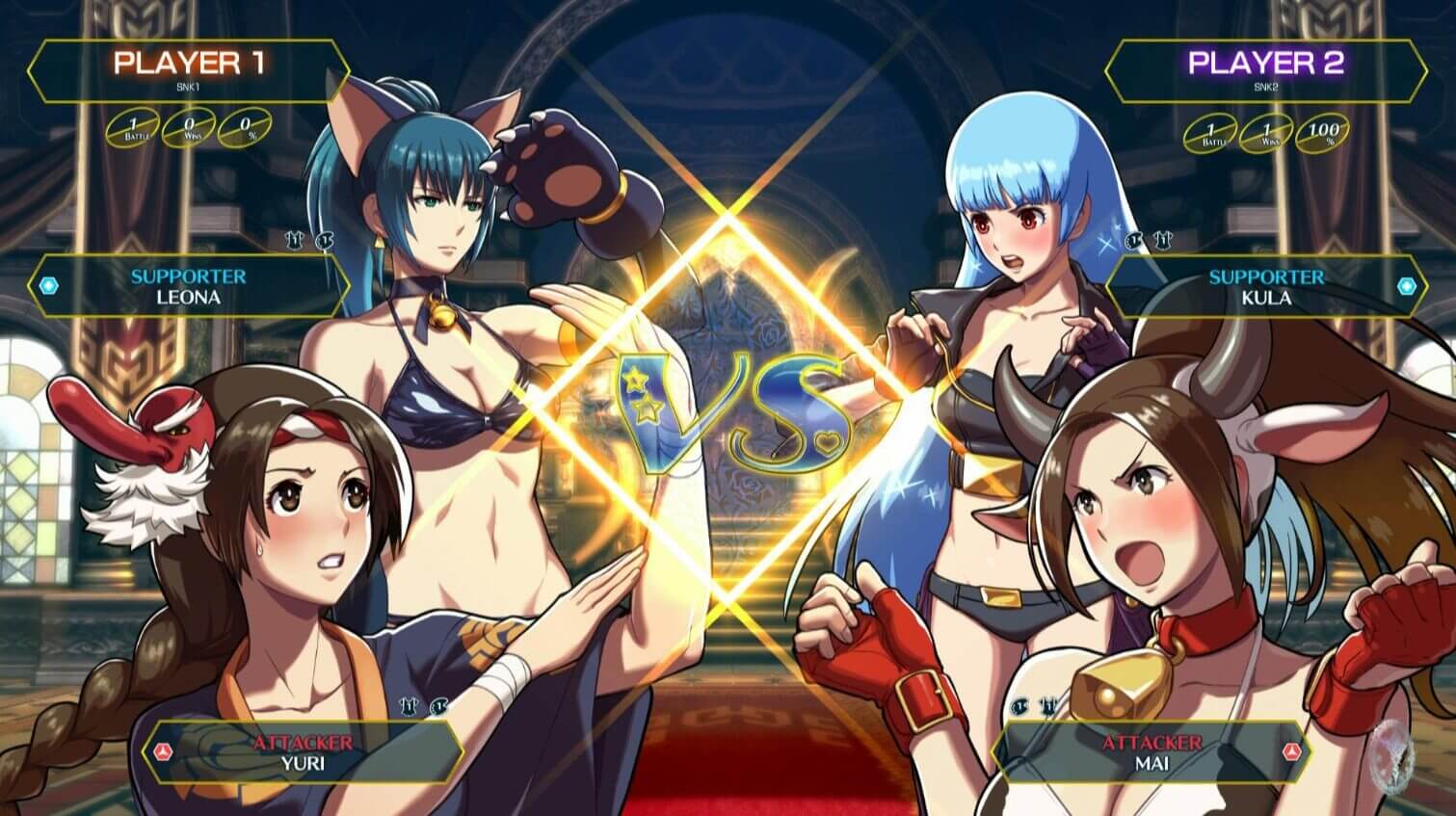 Image: SNK
The Good
It's an easy to play fighter that is well animated
There is plenty to do and options for everyone
Music isn't horrible
The Bad
All the stages look very similar
The game's difficulty isn't any sort of real challenge
There really aren't a ton of playable characters, the roster ultimately feels shallow
7
Overall

Oh no, Terry baby, what is you doing?

SNK Heroines: Tag Team Frenzy is an interesting crossover title. That’s putting it very simply. Utilizing a portion of SNK’s incredible line-up of female characters, the game puts together a smallish collection of women from SNK’s flagship brands to battle it out in a mysterious tournament. Growing up as a big SNK fighting game fan, I got a kick out of taking a moment to recognize a few of the costumed characters. Also, rather hilariously, Terry Bogard is in this game. Yeah, I’ll get to that in a second.

So, before we get too far into anything, there’s something you need to know about SNK Heroines: Tag Team Frenzy. It is so simple that I initially struggled with trying to ignore decades of muscle memory and fighting game strategy. The concept of rushdowns, lows, overheads, and tech moves are lost to the simplicity of SNK Heroines. That’s not necessarily a bad thing, as high-tier fighting games become far more complex after every iteration and casual players may get left in the dust. There are ways to execute combos, specials, and super attacks, but they are all mapped to singular buttons.

There’s a little extra variation that can be built upon if you spend enough time to dabble with character abilities and tag setups. I expect that SNK Heroines was never meant to be a successor or even on par with any of SNK’s standard fighters and ultimately, what the game does, it does decently well. 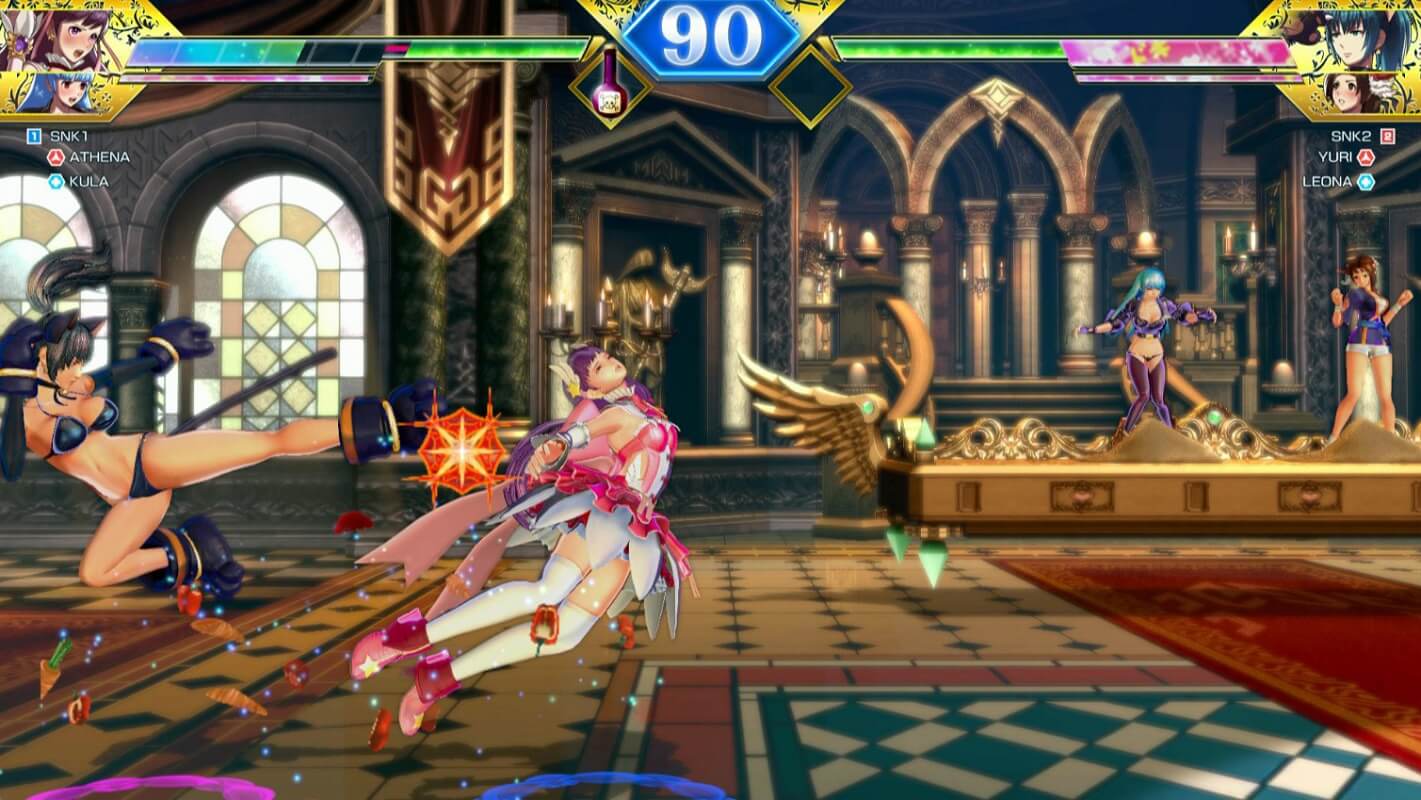 The game is filled with fetish-fuel, which is a little weird and kept me from playing the game in front of my kids. Mai Shiranui, for example, is dressed up as a busty cow-girl, complete with floppy ears, horns, and a tail. Leona is a cat-girl. Love looks like a stripper-cop and Nakoruru looks like a loli vampire. The oddest inclusion is that the Buster Wolf himself, Terry Bogard, has been turned into a busty woman with full curves. Turns out that there was a whole fandom about this before the game ever even came out. Because I am now cursed with this knowledge, you are too.

Fortunately, even the most risque costumes can be replaced with one of two additional unlockable costumes per character. At the same time, many of the tamer characters have more revealing outfits for those that want a bit more skin, or bouncing. Terry, for example, starts with their normal outfit, but with booty shorts and a midriff shirt. You can unlock a badass steampunk outfit and a cheerleader outfit. The costumes and extras aren’t hard to unlock, so you can be more modest or less so with about an hour of gameplay.

As far as gameplay itself goes, SNK Heroines: Tag Team Frenzy isn’t a very fulfilling single-player experience, the story mode’s difficulty is laughable at best. There is a decent enough challenge if you try your hand at the survival modes but the story itself is quite a breeze. There are pairings that unlock trophies if you complete the game, so trophy hunters will need to keep an eye out for those in the trophy menu.

On top of the single player modes, there’s a mode for posing characters and taking pictures, as well as your usual versus options. SNK Heroines: Tag Team Frenzy is absolutely at its best when you are playing against another human. 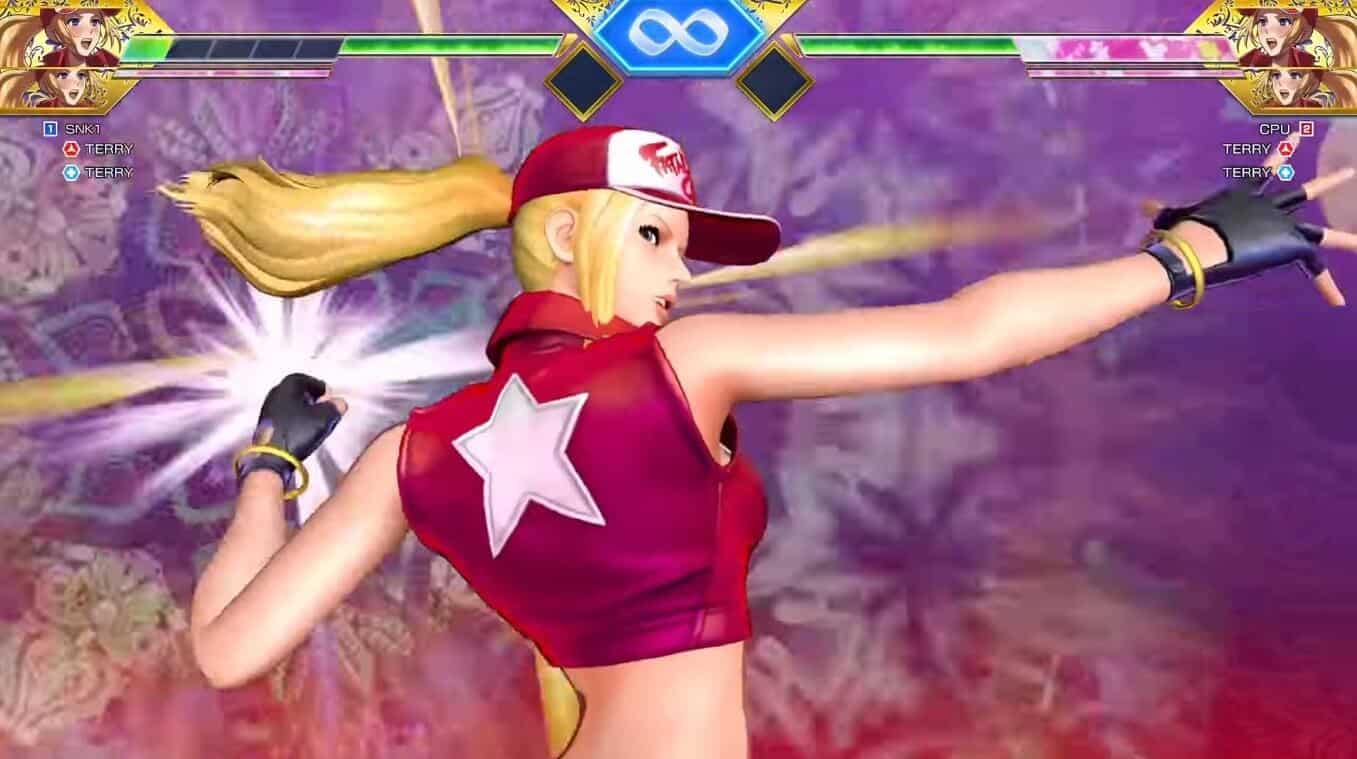 Utilizing Smash Brothers-style controls, getting into the thick of it in SNK Heroines: Tag Team Frenzy isn’t hard to do. Most combos are done with pressing the punch or kick button a few times, followed by one or two directional inputs and then capping the combo off with one or two specials.

Fighting game veterans like myself will find a lot of joy in the ease of combo creation and the flexibility of the system. It’s rudimentary but it works quite efficiently. People less experienced with fighters are also able to link up moves simplistically enough that they can find a more level playing field than in a game like King of Fighters. Getting the hang of this system effectively negates any difficulty the AI in the game can throw at you.

SNK Heroines: Tag Team Frenzy isn’t going to be a game that hardcore fighting fans will be clamoring over, it is a game that is fun to play with a few friends. Don’t expect a ton of challenge but you will have plenty of laughs and an overall enjoyable time. It’s a little too fan-servicey for some people, but overall isn’t too over the top. This is a game that I’d recommend on a good sale, but at the full retail cost of $49.99, it’s a tougher pill to swallow.

SNK Heroines: Tag Team Frenzy was reviewed on PS4 and is available for the PlayStation 4 and Nintendo Switch.

The Good
It's an easy to play fighter that is well animated
There is plenty to do and options for everyone
Music isn't horrible
The Bad
All the stages look very similar
The game's difficulty isn't any sort of real challenge
There really aren't a ton of playable characters, the roster ultimately feels shallow
7
Overall
Related TopicsGameTechiePS4ReviewsSNKSNK Heroines: Tag Team Frenzy