Missing Crypto Timeline: The history of $3 Billion+ in lost money of the future

Where has all the “money” gone? 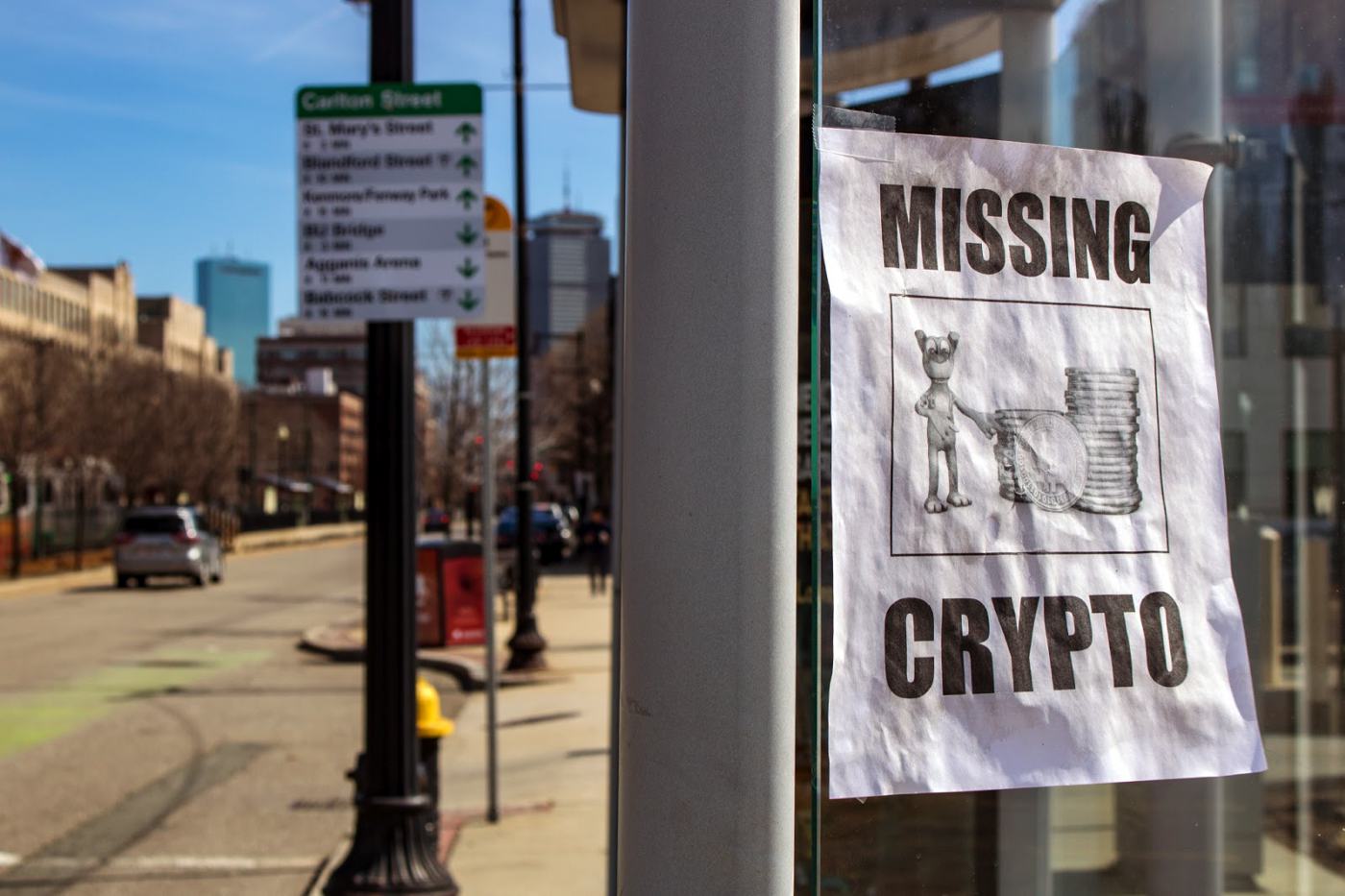 A standard pitch for cryptocurrency might include the premise that you would want to convert some of your net worth into balances on a distributed ledger, and that it would be more secure than ol’ regular money, because a cryptocurrency like Bitcoin is stored on a public blockchain with a system of managing “private keys”; like passwords, which, if created and stored properly, ensure that your wealth is totally untouchable.

And that may be true, but I think the reality of the cryptocurrency investing and/or trading industry today is that most users are not technically capable of interacting directly with the blockchain(s) their digital assets are stored on; or, that is, incapable of generating a private key for a new, secure Bitcoin address, or interpreting the Solidity code in an Ethereum smart contract.

So, in my opinion, that means the majority of cryptocurrency “users,” (as well as “investors,” since there aren’t any Bitcoin ETFs yet…) will have to depend on 3rd party services for interacting with the network(s), i.e. a Bitcoin exchange or an EOS wallet service. Entities which fully resemble the centralized gatekeepers which members of the crypto community often say are the cause of plain ol’ regular money’s problems…

Problems such as funds going missing, or worse, being stolen

The largest cash robbery in US history, for example, was the Dunbar Armored robbery in 1997; an armored truck facility was robbed for $18.9 million, the equivalent of $29.5 million today, thanks to inflation. This was found to have been an inside job, and about $10 million was left unaccounted for; though, the money was more than likely insured.

In comparison: just ~4 years after the Bitcoin whitepaper was published, in mid-2013, the Vircurex exchange was allegedly hacked for an amount of BTC which was worth $50 million at the time, prompting the service to suspend withdrawals. Customers who are still waiting for those funds back have launched legal suits, claiming they have found reason to believe it, too, was an inside job. This happened before anyone was offering crypto theft insurance.

Actually, relatively nobody in today’s cryptocurrency industry even remembers the Vircurex hack, because the more widely known and financially significant alleged hack involving Mt Gox happened shortly after, in 2014. That incident, too, has been theorized to be an inside job, and the legal suits are still ongoing.

Although, before jumping to conclusions, remember that it is easy to confuse an “inside job” with a “social engineering”-type hack. For instance, Mt Gox was robbed before, in 2011, when a computer for one of their auditors was compromised and a hacker was able to divert Bitcoins from the exchange’s hot wallet to themselves.

These three incidents alone should give anyone considering purchasing a significant amount of cryptocurrency from an exchange some serious things to consider, such as the risk of holding said cryptocurrency on said exchange for longer than necessary. But there’s far, far more examples and security concerns to consider, i.e.: To register for many crypto exchanges, you must share with them your personal information, which can also be stolen. This year, in February, the exchange CoinMama announced that 450,000 of their users’ email addresses and passwords had been leaked, for example.

To help keep track and come to a better understanding of incidents similar to the Vircurex and Mt Gox hacks, which will hopefully help people avoid being afflicted by such events, I’ve made a huge list of all the “Missing Crypto” incidents which are publicly known. Until others get a chance to review it, it obviously shouldn’t be called complete, but it can still absolutely be useful even if it’s missing some examples. Please tell me if you know of any that should be included!

Here is where you can download a spreadsheet with the data, or a printable PDF report with charts: 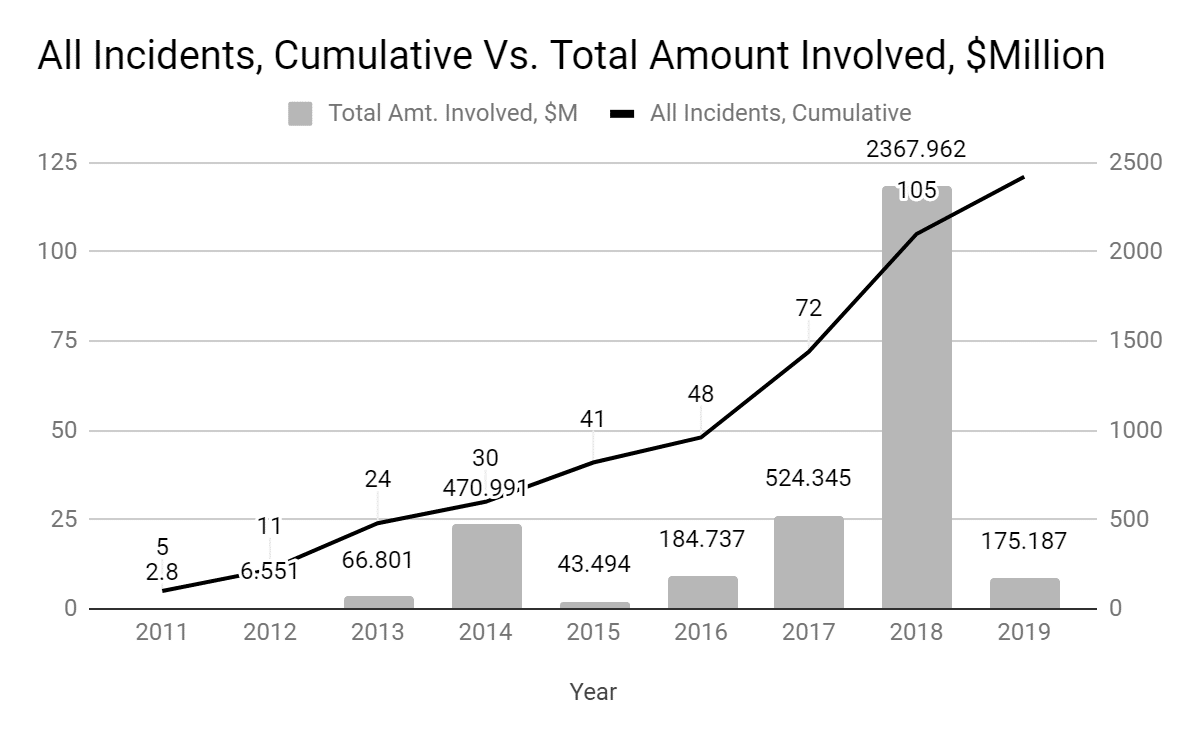 Total Amounts Involved (At The Time Of Incidents), by $USD million: 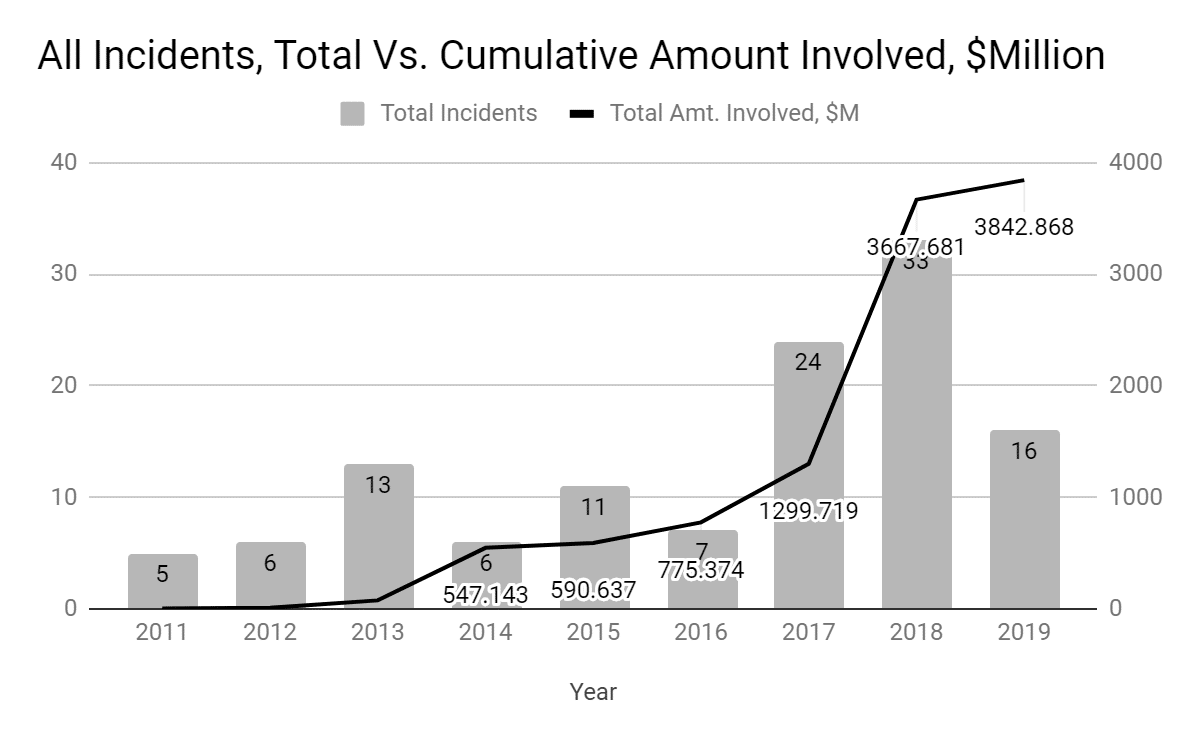 Keep in mind that the “Missing Crypto” is no longer worth what it was when it went missing. In fact, it was once worth much more:

At the end of 2017, as Bitcoin’s price peaked, so did the value of any Bitcoin which had been stolen or gone “missing.” According to the list and information provided here, the “Missing Bitcoins” could have at one point had a face value of nearly $30 billion dollars; but, since November 2018 they capitulated with the rest of the cryptocurrency market to around $6 billion.

The “Bitcoin-Related” and “Ethereum”-related Incident Types are the only rows here which had known crypto amounts, so just know that the “Pyramid / Ponzi” incidents definitely involved more “Missing Bitcoin,” but only the incidents with explicitly quantified amounts of crypto included those values.

It is quite staggering to calculate what the 25,000 Bitcoins involved in the “first Bitcoin hack,” which was against BitcoinTalk user “allinvain,” are worth today…

But in all, the most concerning information I read in the course of creating this timeline had to do with the suspected, and in some cases, indicted or convicted parties which perpetrated the hacks or exit scams included in the list. Most alarming was what I read about North Korea:

As more information comes out related to these incidents, as well as more like them, I will be periodically making updates to this timeline. You can find those on my Medium page, or reach me on Twitter. There have already been three such incidents in the time that I’ve spent working on this third update; those were:

What do you think about everything? Are you still invested in crypto? Let us know down below in the comments or carry the discussion over to our Twitter or Facebook.

writer + videographer living in brookline, working in the world