Review: Cadence of Hyrule – a fresh, upbeat take on Legend of Zelda

The soundtrack alone is worth the purchase price.

If there was an indie game development team equivalent to the Avengers and you gave them a Legend of Zelda license and said, “Do something with Zelda that’s never been done before,” the result would be Cadence of Hyrule.

Developed by Brace Yourself Games with the shared DNA of Crypt of the Necrodancer and classic, top-down Legend of Zelda games, this one is part rhythm game, part roguelike, part dungeon crawler, and part action adventure. Here’s how that unique mix holds up.

The first thing I do when I review games is look at all the options and oh boy does Cadence of Hyrule have a ton. You can change almost every visual setting, from the grid that shows up to enabling or disabling screen shake, there are a bunch of localized languages, and perhaps most importantly, you can disable moving to the beat, which will make more sense in a minute.

All of that is before you even start a game, which has these settings to it 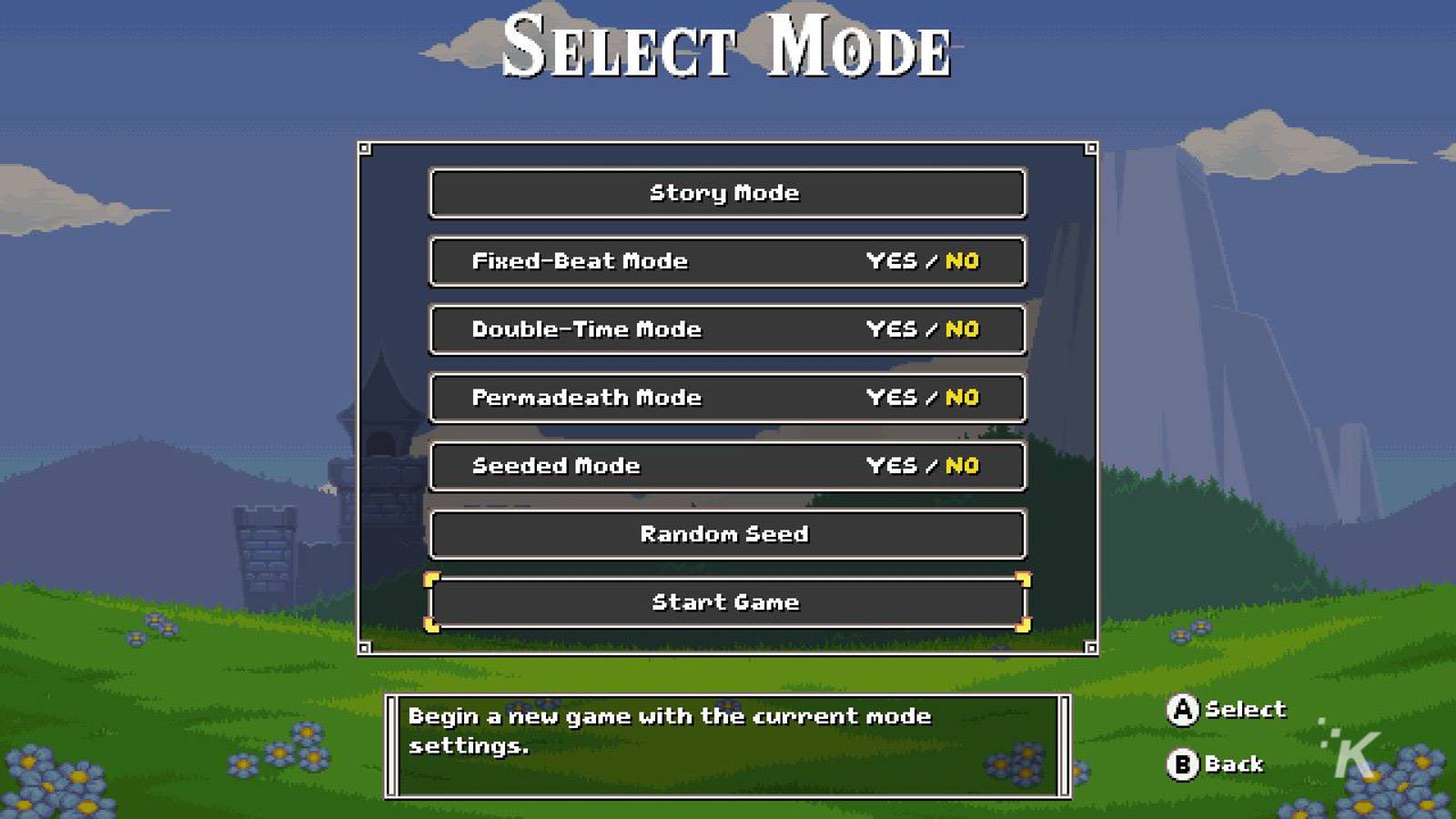 These are the standard, default settings, which puts you in story mode and generates a random overworld layout for your save file. But Double-Time mode? Permadeath? Seeded runs? I cannot wait for people to speed run this game. We, however, are going to skip all of those for now.

Once you get into the game, you learn pretty quickly how it works. First, everything moves on a grid, so the left D-pad is how you move, one space at a time. You can use the analog stick, but the first time you try to do so the game gives you a warning message that’s basically like, “You can do this if you want to, but you’re making it harder on yourself if you do.” That warning is legit.

Second, when you’re in battle, you need to move on the beat. Enemies all have movement and attack patterns that happen to the beat of the music, which you’ll already be familiar with if you’ve played Crypt of the Necrodancer. For instance, one of the weaker enemies moves every other beat, putting its arms up on one beat, then pouncing towards you one space on the next. Bounce around in the right spots and you can easily outmaneuver and take down this chump, with attacks happening when you try to move into an enemy.

Once you’re out of combat, you can move at your own pace. I would say, however, that about 60% of the game takes place in combat, since “combat” is active whenever there’s at least one enemy left alive on the current screen/room.

Bounce through the tutorial, pick a character between Link or Zelda, and dive into the main world!

Get used to seeing screens like this. (Image: Jake Vander Ende / KnowTechie)

You lose some of your things when you die and you come back at the most recent Sheikah stone. What you lose? Honestly, this took me a few deaths to really figure out. Let’s take a look at the inventory screen to dig in, here. Pun intended, since, like Necrodancer, Cadence of Hyrule prominently features a shovel and digging.

The inventory screen is going to feel familiar to any Legend of Zelda veteran, so here’s a breakdown of what you’re looking at.

If it sounds like a lot, that’s because it is a lot. This is a fully-realized Legend of Zelda game, after all. It feels like one, too.

While this town feels exactly like Link to the Past, there’s also a Gerudo Valley that’s more reminiscent of Ocarina of Time. There’s a beach that harkens back to Link’s Awakening. Cadence of Hyrule is simultaneously its own game and a winking homage to everything that’s come before it.

Still, it feels just as good as ever to find those permanent upgrades.

I found myself thinking, once I got used to the game, “Just what exactly is a Zelda game?” What does it mean to be a Legend of Zelda game, anyway? Is it the hero’s journey? Is it the exploration? Is it the satisfying, responsive combat? Is it the gradual ascension from wimpy pipsqueak to divinely powerful champion?

Cadence of Hyrule has all of that, but there are bits and pieces that just feel a little off

For instance, when you first start out, you die so much. I could barely move without dying, but each screen clear awarded a diamond or two and that established a nice loop. Survive a little, die, lose everything but permanent items and diamonds, spend those diamonds on a game over screen to jump back in with upgrades like more heart containers, and get back to the action. This made sense, until I just…stopped dying?

I think it was around the time I got about five or six total heart containers, found a spear, and upgraded that spear to a ruby spear that deals less damage but restores hearts every five kills, that I just became a nearly invincible powerhouse. The core loop just kind of snapped and it never reestablished itself.

Why do I have 78 diamonds at that point? I literally just never died to spend them. The early game was filled with, “I don’t know, maybe if I save a few here and there, I can afford the next upgrade, which I’ll have to choose carefully,” and then I hit a point that was just, “lol, what’s that?” It felt incredibly jarring, especially since Zelda games are usually so well-paced and meticulously well-structured.

And honestly, I understand the appeal of a procedurally generated overworld for replay value, but at what cost? It feels like foregoing an intentionally designed overworld diminishes the first-play value.

Finally, once I made my way through the first dungeon and got my boss key to open the dungeon’s treasure chest, it spilled out three items. Damn, three super cool things at once! The Cane of Somaria, the Hookshot, and the Mirror Shield?! I grabbed the Mirror Shield aaaand the other two disappeared. Any warning about that would have been great, especially because the Mirror Shield isn’t even for Zelda, it’s for Link, and I hadn’t even played as him by that point.

Still, actually reaching a boss is just as fun as ever. They’re gorgeous, all have unique combat patterns, and a decent challenge no matter what gear you go in with.

I won’t spoil any of the mechanics, but here’s a glance at one of them

So, overall, is Cadence of Hyrule worth it? Yes, definitely. There are some pacing issues and the wayfinding and progression systems are definitely wonky, but you’ll forget about all of that as soon as the game’s incredible soundtrack kicks into the combat music for the zone you’re in. Seriously, Danny Baranowsky and friends did an astoundingly good job with the music and I would recommend this game for that alone.

I would recommend Cadence of Hyrule to everyone who’s a fan of Crypt of the Necrodancer and Legend of Zelda games and to anyone looking for an incredibly fresh game that fuses rhythm games and action/adventure games into something completely new and interesting.

Note: Cadence of Hyrule is for one or two players! Jake only got to review single player.