The Linksys Hydra is a compelling device. It’s not cheap, but it’s arguably worth the cash.

You likely seldom think about your router. And that’s okay. Your ISP takes care of it when you open a new broadband connection.

But here’s the thing: most ISP-supplied routers are total crap. I’m generalizing, of course. Some providers don’t cheap out. But many do.

These penny-pinching ISPs give their customers whatever they can find within the gloomy confines of the Bargain Basement.

And so, if you want to make the most of your speedy fiber connection, you’ll likely have to buy your own router. So, what should you get? Well, allow me to introduce you to the Linksys Hydra 6. 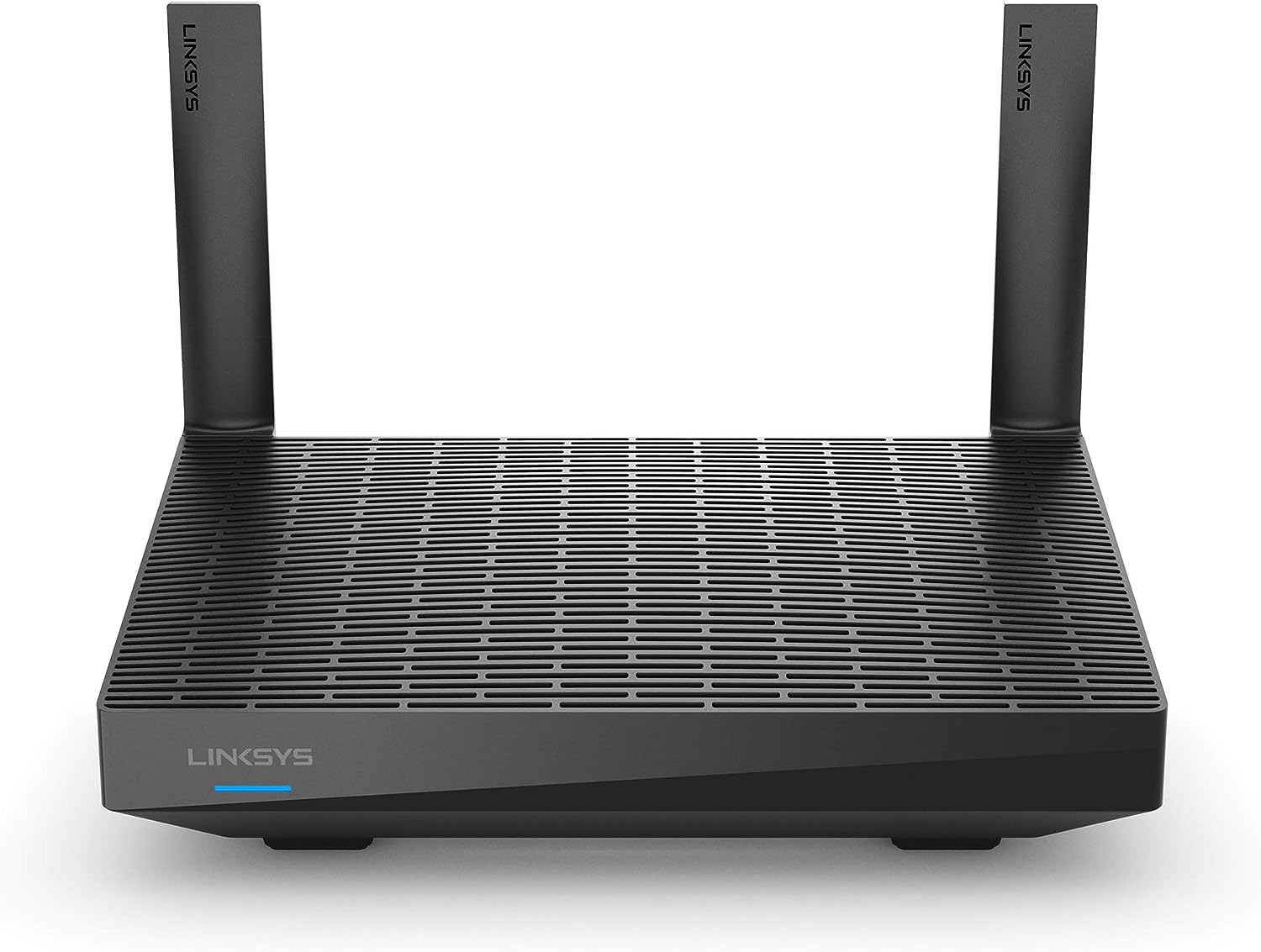 It’s not cheap, but it delivers on every point: from performance and range to support for the latest Wi-Fi standards and configurability.  Its biggest weakness is the 1Gbps WAN limit. But, it delivered consistent performance no matter how many devices I added to my home network.

But it justifies its steep price, thanks to its support for the latest Wi-Fi 6 standard, exceptional performance, and remarkably slick software.

A brief introduction to the Linksys Hydra 6

Released during 2022’s halfway point, the Linksys Hydra 6 is positioned as an all-purpose router, placing a premium on everyday performance and household coverage.

It sits towards the upper echelons of the mid-range networking market, both in terms of pricing and capabilities.

A major selling point, particularly for those looking to upgrade from an older router, is its support for Wi-Fi 6.

Introduced in 2019, the Wi-Fi 6 standard supports higher theoretical speeds of up to 9.6Gbps. This shouldn’t sway you towards upgrading.

The average US broadband home connection speed stands at around 167Mbps, according to Ookla.

Let’s imagine a hypothetical household of five people, each using a phone and laptop simultaneously. And then throw in a smattering of smart home devices.

It’s not long before you have fifteen or even twenty devices connected to the same router.

As the network grows, cracks emerge, taking the form of sluggish speeds and connection reliability issues. Without going too deep, Wi-Fi 6 is designed to withstand large multi-device environments.

If you’re curious, The Verge has a great explainer about the standard. It’s worth reading, as I only scratched the surface.

Let’s move on with our overview. The Linksys Hydra 6 doesn’t have the most generous port selection we’ve ever encountered, but it’s hardly paltry.

There’s one ethernet WAN port for your modem, four ethernet ports for wired connections, a barrel power jack, and a USB-A port that allows you to create an ad-hoc file server.

Above these are two chunky antennas, which purportedly give the device its solid range.

Linksys claims the Hydra 6 can blanket a 2,500-square-foot house with a solid connection. On the front, you’ll spot a solitary status light.

Setting up the Linksys Hydra

The Linksys Hydra came with an ethernet cable, a power adaptor (with both UK and EU plugs), and a setup CD which I immediately discarded because it isn’t 2008 anymore.

Getting started was a simple matter of disconnecting my existing router and connecting the new one.

Linksys pushes you to download a dedicated app during the setup process. I must admit, I was a bit skeptical of this.

Over a decade-long career in tech journalism, I’m no stranger to installing “mandatory” apps that are often utterly superfluous.

This wasn’t one of them. The Linksys app slickly guided me through the ropes of deploying the Hydra 6. A few moments later, I was up and running.

It was a painless experience and one I imagine a non-technical user repeating without much stress or inconvenience. We’ll talk more about the Linksys app later in this article.

There is no shortage of garish-looking routers, particularly when looking at those in the gamer niche. By contrast, the Linksys Hydra 6 is aesthetically quite conservative.

As mentioned, the cabling sits towards the rear. There are just two antennas. It has a single, lonely status light. It’s clad entirely in black.

Linksys seemingly designed the Hydra 6 to look invisible. And that’s not a bad thing.

That said, the router does have a few noteworthy design elements. The router sits on four (rather substantial) rubber feet, allowing it to dissipate air and limiting its dust ingestion.

Its top chassis has a lattice-style design, which likely also helps when it comes to thermal management.

And it feels robust. The chassis feels hard enough to withstand any untimely drops or prangs — although, for obvious reasons, I didn’t test this out.

Okay, here’s my first complaint: the Linksys Hydra 6’s WAN port caps out at 1Gbps. This means if your connection is faster than 1Gbps, you won’t see any benefit.

In practice, this wasn’t an issue for me. My home broadband connection is precisely 1Gbps — or at the upper limit of what this router can do.

But this limitation may prove a dealbreaker if you’re lucky enough (and rich enough) to have multi-gigabit broadband.

For most people, this problem is purely theoretical. The average US (and, indeed, UK) broadband connection is far slower.

That throat-clearing aside, I was impressed to see how capable the Linksys Hydra 6 was. With the router in place, I began connecting my multitudinous Wi-Fi-enabled devices.

Eventually, I neared the 20-device mark. Even under this pressure, the Hydra showed no signs of buckling.

I performed a speed test on the router itself. This showed the device hitting the upper limits of my ISP’s promised download speeds of 849Mbps and upload speeds of 53Mbps, rounded off with a ping of 23ms.

A later speed test on my laptop over Wi-Fi delivered 243.15Mbps down and 40Mbps up. That’s about as expected. You’d naturally expect a device to have a slower connection than the router itself.

Before I wrap this section up, let’s talk about range. The UK has among the smallest average houses within the OECD.

Our houses are primarily built with brick, which can limit the reach of Wi-Fi.

But the connection speed and strength remained constant even when pushed back from the router as far as possible. Overall, I was impressed.

The Linksys Hydra 6 encourages you to use the app for its day-to-day maintenance. This app is the router’s shining feature. It is ridiculously easy to manage your network, even when you’re away.

I’m most excited about the security benefits here. Routers — like most embedded devices — are a cybersecurity nightmare.

Why? Because they’re computers. But unlike your phone or laptop, we aren’t really in the habit of periodically upgrading them.

This has led to the emergence of massive botnets that consist primarily of zombified routers and can be weaponized against a given target.

The infamous Mirai botnet, which took down a huge chunk of the global internet in 2016, is a great example of this dangerous potential.

The Linksys Hydra 6’s software makes running or scheduling updates easy. It reduces the friction required to ensure your router is always secure. And that’s a good thing.

As an added bonus, you can see what devices are connected to your network at any given time. I can imagine this being handy for diagnosing misbehaving IoT devices.

A suite of parental control settings allows you to block specific websites for certain devices. So, if you want to stop your kid from accessing Instagram during exam season, you can.

You can also block devices from accessing the internet entirely and schedule pauses for specific times.

Additionally, the app shows you the relative signal strength for everything, which is very handy.

Sadly, I couldn’t find a way to implement global website-blocking settings for all devices. That feels like an oversight.

Elsewhere in the app, you can create a secondary “guest” network, which I imagine is ideal for those running Airbnbs, where they’re reluctant to let strangers access their connected IoT devices.

You can also set up a file-sharing system, and if you need to stretch your router’s footprint further, add new nodes and build a mesh network.

Alternatives to the Linksys Hydra 6

If you’re unwilling to stomach the Linksys Hydra 6’s $179.99 price tag, consider the TP-Link AX3000. This supports the same Wi-Fi 6 standard but at half the price.

For those with a bigger budget, Amazon will sell you its Eero Pro 6E mesh Wi-Fi system.

This device supports Wi-Fi 6E, the latest revision of the Wi-Fi standard, and is primarily concerned with lower latencies.

Another possible option is the TP-Link Deco Wi-Fi 6 Mesh System.

This pack consists of three Wi-Fi 6-enabled hubs, allowing you to cover a 5,800-square-foot property, albeit at a cost. It normally retails for $250.

The Linksys Hydra is a compelling device. It’s not cheap, but it’s arguably worth the cash.

It delivers on every point you’re likely to care about: from performance and range, to support for the latest Wi-Fi standards and configurability.

I’m a big fan of the Linksys Hydra 6’s industrial design and the fully-featured companion app.

It delivered consistent performance no matter how many devices I added to my home network and blanketed my house with a reliable and nimble connection.

Its biggest — and arguably only — weakness is the 1Gbps WAN limit. This isn’t an issue now, but as ISPs accelerate the roll-out of FTTP internet, it may dent the appeal of an otherwise well-rounded router.

Where to find the Linksys Hydra 6

You can pick up the Linksys Hydra 6 from the company’s own website, Amazon, Best Buy, Lenovo, and Walmart. It usually retails at $179.99.

Experience the next level of WiFi with Linksys Hydra 6 Mesh router. Now you can experience the fastest connection to everything you do, from next-level gaming to streaming your favorite content.