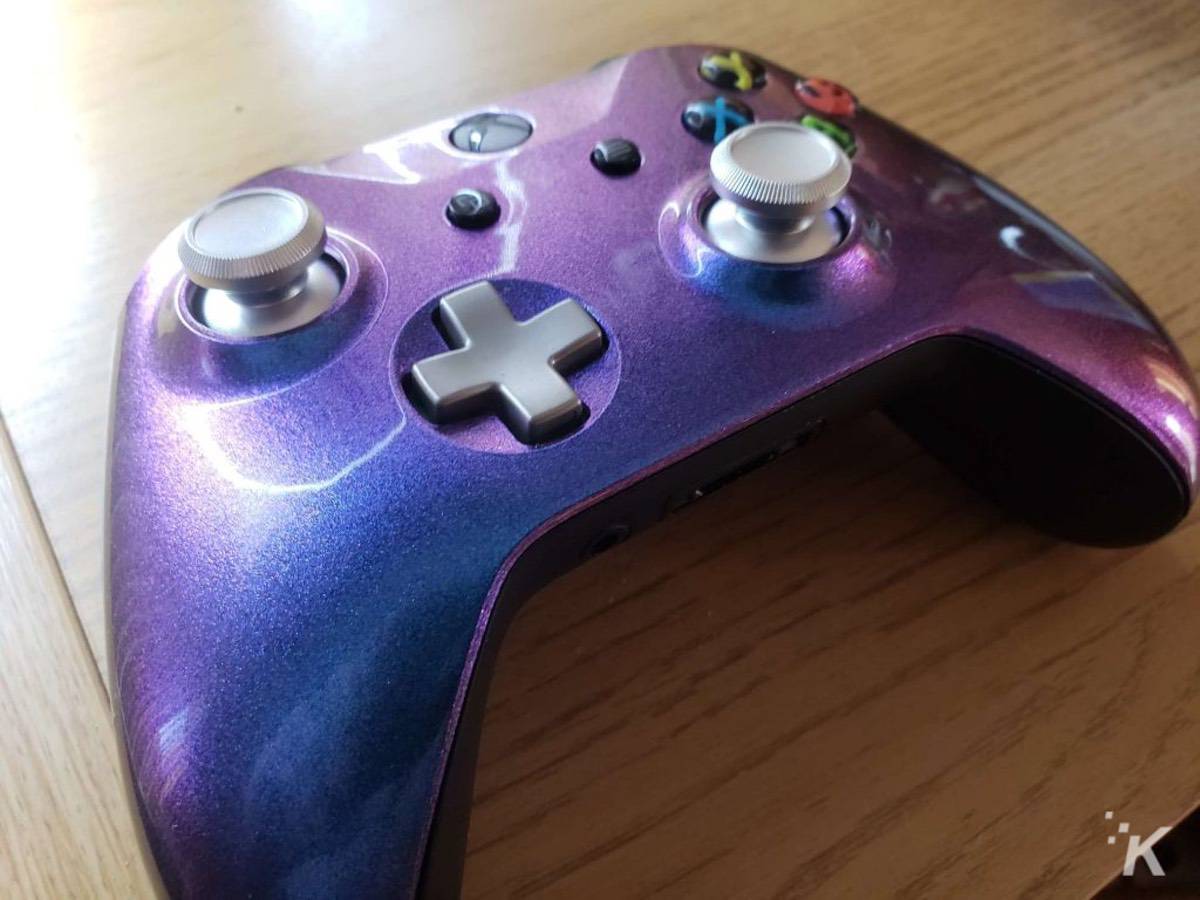 Image: Josh Knowles / KnowTechie
The Good
These aluminum thumbsticks are amazing
The build didn't have any overlapping parts the felt sharp or obtrusive
The magnetic swappable dpad and circle pad were an incredibly nice touch
The Bad
The textured back I chose was not a good choice
There weren't any mods and back paddles for the model I built
While an awesome feature, the magnetic dpad and circle pad can be problematic if little ones can get their hands of the controller
8
Overall

Custom controller companies are a dime a dozen these days. The biggest issues we usually encounter was that many pieces seem poorly fabricated and can’t take much abuse. Heck, not too long ago, I crushed the R2 and L2 buttons of a custom PS4 controller on accident.

These fly-by-night controller companies can be an expensive gamble, so when MegaModz hit us up to take their controllers for a spin, I expected more of the typical shit-show. What I got wasn’t half-bad.

For starters, we ended up creating two controllers, one for the PS4 and one for the Xbox One. There’s a good bit to tackle with the PS4 one, so I’m going to keep that review far away from the Xbox One version.

I was able to visit their site, build my preferred controller with all the fixins and that was that. 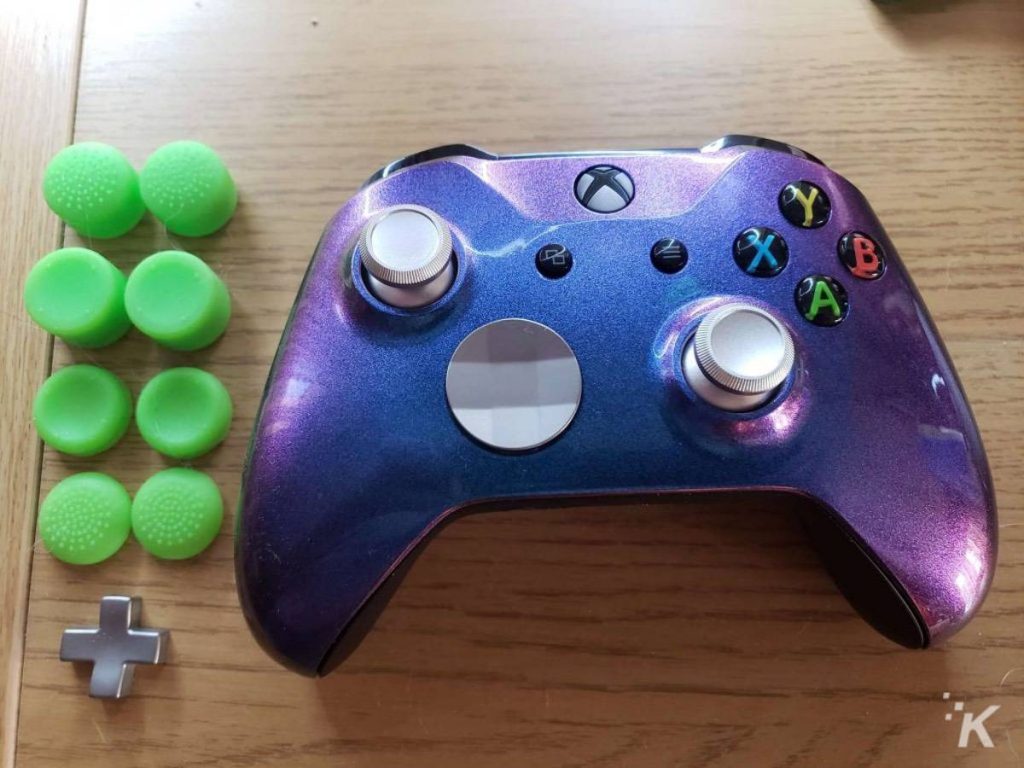 Honestly, it took no more than five minutes to completely build the controllers for both consoles. MegaModz actually has a pretty damn good website for doing the deed.

Both arrived only a few days after the initial order was placed and I immediately took to the Xbox One, as there are some reviews I needed to get done.

When I ordered my Xbox One custom controller, I was able to have it built to nearly my complete specifications when it came to the aesthetics.

I selected the same chromatic purple that I chose when I originally did the last PS4 custom controller review and selected the textured red and black back. Yeah, it looks like someone with a bloody nose sneezed on the back of my controller.

It wasn’t the best design choice, to be honest. Upon receiving the controller and reviewing the construction, it was put together solidly and there weren’t any places that felt out of place or sharp, which is a good sign. 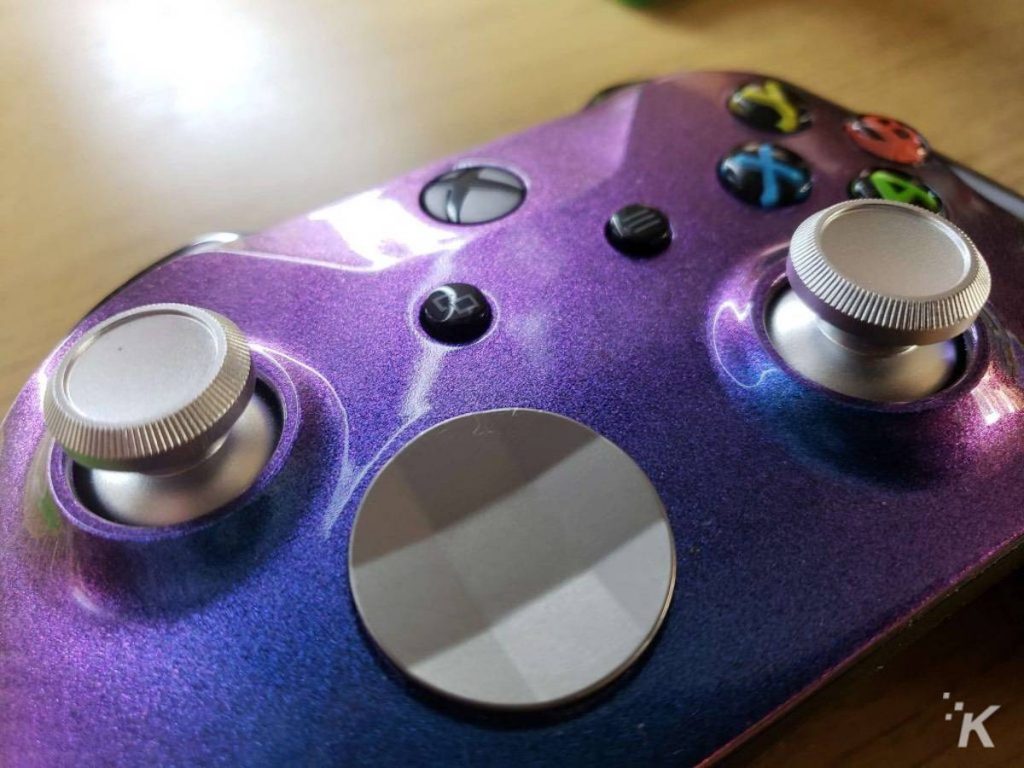 When it came to available features, the Xbox One controller wasn’t super over the top. There aren’t any mods or special programmable buttons on it that will make a major change to things.

I did opt for the aluminum thumbsticks and the aluminum dpad and disc, as they were the fancier features on the list. As it turns out, these features themselves are a major contributor to why I love this controller at the end of the day.

I also opted to have them send me a charging cable because I assumed that if that option was presented to me, we were talking about having a rechargeable battery in the controller as well.

There wasn’t, but the extra cable will serve me well. I also ordered some rubberized thumbstick covers with it, I didn’t end up really using them because the aluminum thumbsticks were so damn good. 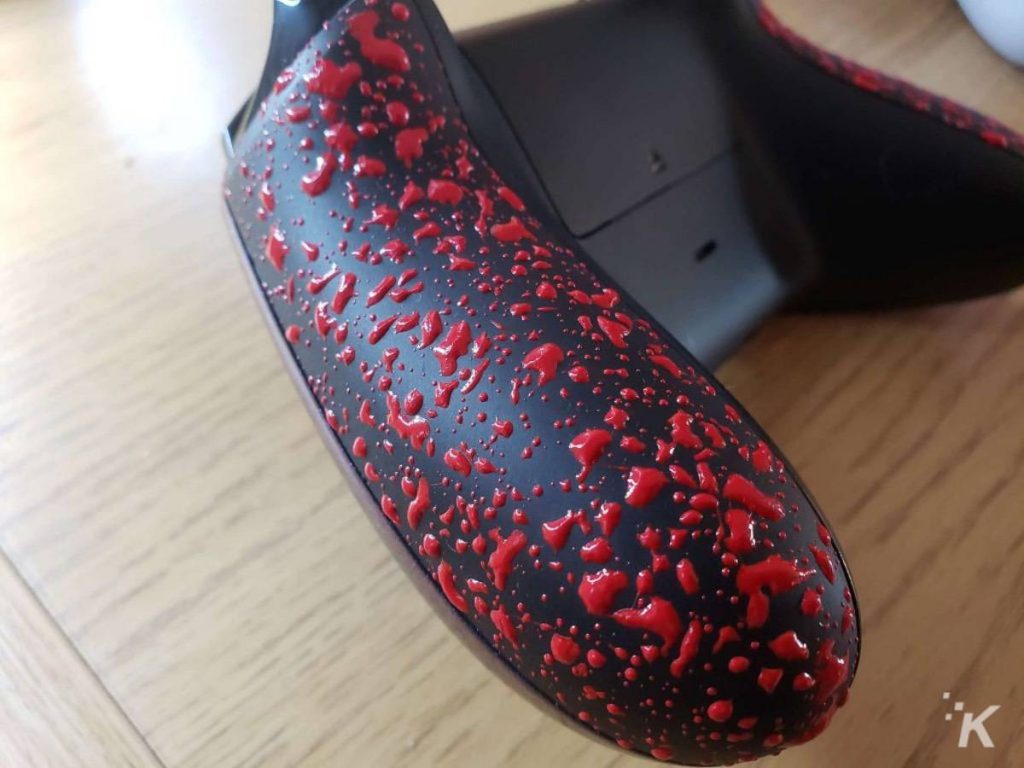 Of course, this isn’t a perfect controller. Part of this is because that red textured part on the back of the controller doesn’t really feel great in my hands. If I had to go back and rebuild this controller, I would have chosen the soft touch option instead of electing to use the textured grips.

It feels like someone dribbled plastic all over the back, which is essentially what those grips are. While also one of my favorite things on the MegaModz controller, I’d totally warn anyone with kids about adding the magnetic dpad and circle pad to the controller.

After one of my initial uses, my youngest son liberated the circle pad from the controller and hid it, causing me to turn the house upside down in an effort to find it, which I ultimately did.

I’ve never had the pleasure of using an Xbox One Elite controller and I’ve been told from a few custom controller sources that those are so good that they effectively negate any reason to buy a custom Xbox One controller.

With that being said, the design of the MegaModz Xbox One controller was overall pretty fantastic. Yeah, I had a few hang-ups with parts of the design choices that I made and to be honest, theirs isn’t the cheapest option, as a custom controller will run you over $100.

But, the overall quality wasn’t bad and it survived enough abuse and wear and tear without completely falling apart to be considered a worthy purchase.

Overall, MegaModz actually seems to be selling a fairly decent product. Factoring in the speed they seem to get these out and the quality of their builds, there wasn’t too much to complain about here.

Be cautious when selecting your body style options, as the textured back felt pretty bad.

The Good
These aluminum thumbsticks are amazing
The build didn't have any overlapping parts the felt sharp or obtrusive
The magnetic swappable dpad and circle pad were an incredibly nice touch
The Bad
The textured back I chose was not a good choice
There weren't any mods and back paddles for the model I built
While an awesome feature, the magnetic dpad and circle pad can be problematic if little ones can get their hands of the controller
8
Overall
Related Topicscustom controllerGameTechiemegamodzReviewsXbox One

Instagram appears to be down for some users right now